Today was a day to bottle…along with (in separate bottles) chocolate oranges; curry; swimming in a hot outdoor pool in the freezing cold and rain; grandchildren; sledging; I am sure you can all add your own.
Anyway, three people wanted a trip to Wetherby and beyond (Plan A and like any good plan there is often a Plan B). We headed for Wetherby via Burnbridge and Kirby Overblow and suddenly with a turn to the right we decided to go to Linton and into Wetherby through the back door. By now the thoughts of Boston Spa and Collingham had vanished like back stops and exits.
We took a pleasant route to Boston Spa and back onto the A1 bike path and down to Wetherby and a bacon sandwich or two washed down with a decent coffee. Having put the world to rights we returned to Harrogate via a muddy Harland Way, Follifoot, Spofforth and Rudding Hill.
A brilliant way to spend a cold December day. Sorry carers, present wrappers, Christmas shoppers and exhausted elves, you missed a treat.
30 glorious miles. CG

There were 19 Wanderers on the ride today as we set off towards Burn Bridge then cycling up Brackenthwaite Lane, re-grouping at the top of the hill. Then through North Rigton passing Almscliff Crag and a photo stop; here some riders left for a shorter ride back to Harrogate, then on to Greenmires Lane and the main road. The turn onto Pill White Lane was on a blind hill summit so I cycled up first to check if there was any oncoming traffic as the group turned. A nice downhill stretch and over Lindley Bridge before the steep climb up to Farnley. At the top we met Santa, we think he was doing a recce for his rounds on the 24th, however he said ‘if we were all good cyclists and ate our bacon sandwiches and cake, he would deliver our presents’ and wished us Happy Christmas!
At Farley junction some more riders left, leaving 11 to cycle on through Otley and the coffee stop at Stephen Smiths, another cyclist left here so now down to 10 for coffee. They way back was the usual route, Castley, Dunkeswick, Kirkby Overblow and the ring road. We decided to come back down Crimple and the showground to cycle back to Hornbeam on the now cleared cycle path that some of us had helped to clear yesterday. A very good hilly ride (well not too steep!) in good company. Thanks to Joe for back marking to Farnley and Charlie for the remainder of the ride.
31miles, elevation (Strava) 2,332ft. (Garmin) 620mtr. Chris R. 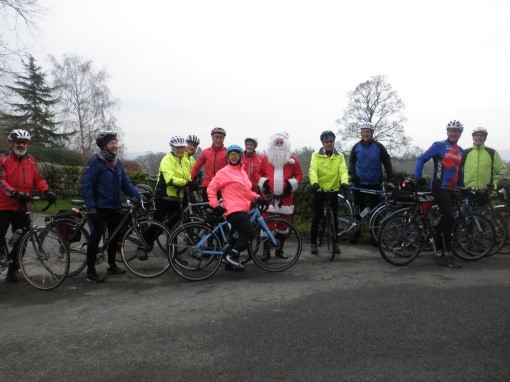 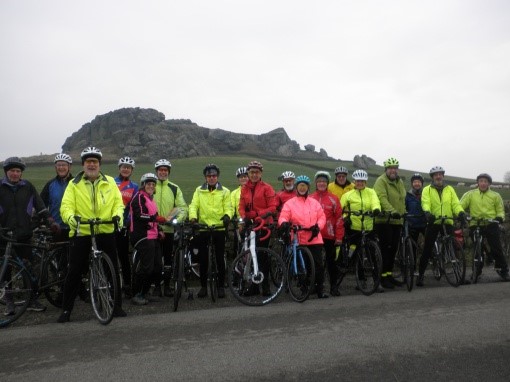 With cold weather and some regulars away, I was glad Maris turned up and turned todays ride into a group effort! The two of us set off along the Greenway to meet up with the Knaresborough contingent and when we were all gathered there was a grand total of five! Our destination was Pateley Bridge and we set off through Hollybank Wood and on to Clint where we were joined by Paul who has safely seen Baby Jesus arrive in the school Nativity!
We headed up towards Brimham Rocks and at the top headed down towards Smelthouses and then onto Glasshouses and into Pateley Bridge. We passed Teacups and, on Alan’s recommendation, we headed for Wildings on the edge of the Town. We were joined by James who is on the road to recovery from hand surgery and had driven out to have coffee with us. It was great to see him and it was good he can now drive. He is hoping to be back riding soon. The coffee passed the ‘Paul test’ and the cheese and bacon scones met with approval. Definitely worth a try!
We had to head back out in the cold and decided to retrace our steps to Glasshouses then follow the main road to Summerbridge but then turn off and head for home via Dacre and Darley and the Greenway. Paul left us at the Hollybank Wood turn, Alan at Ripley and Colin and John at the Beryl Burton which left me and Maris to ride back into Harrogate. Despite the cold day an enjoyable ride on a slightly different route and a good cafe stop.
Thanks to the ‘few’ who turned out for their company and not talking politics! 35 miles. Kevin

Today’s Long Ride was a journey of contrasts in terrain, weather conditions, ride tempo and finally route selection. The planned route was a sort of “North Circular” via Beckwithshaw, Birstwith, Brimham and Fountains leading to Ripon with the optional extra of a loop to Boroughbridge. Eight set out in contrasting degrees of layered clothing. One of our number chose shorts which proved to be a layer too few, causing an early departure for the warmth of Sophie’s (I trust). A switchback of climbs and descents took us to Brimham, where we turned into the SE breeze for the first time. The long descent from Brimham to the Watergate turn for Fountains gave ample opportunity for the wind chill to take effect, providing a taste of what was to come until beyond Ripon. Climbs to How Hill and past Fountains Hall proved welcome warmers before our stop at the Visitors Centre after 2 hours and 23 miles of energetic brisk riding. Contrasts again – with three “hares” to the front and “steadies” behind. Speaking personally, the NT’s Christmas scones were a winner and worth a try if you’re that way again soon. I also spotted that the Visitor Centre’s tearoom will close from 7th Jan until mid Feb for a refurb/ remodelling – worth noting. Studley cafe will remain open. David R and Angela headed back to Ripley after the break, leaving 5 to brave our second dose of wind-chill down through the Deer Park to begin the flat half of the route. Skirting the centre of Ripon via Borrage Lane we were soon heading for decision time at Bishop Monkton. Faced with three choices of route, four of our five preferred to turn out of the chilling breeze and head for Ripley via Markington. Seeking a contrast of pace, I opted for the Roecliffe extension and a warm up light lunch in Morrison’s cafe, Boroughbridge. No sooner had I reached the checkout when a cheery voice greeted me from the queue – I’d caught the EGs on their return from Easingwold, and with whom I shared convivial and earnest discussion on Brexit, the no-confidence vote and housing and planning in Harrogate; all good brain food to go with the tea and scones. To highlight the contrasts of the day, we emerged from Morrison’s blinking in the bright sunshine. Although very welcome, it arrived too late to have any effect on the temperature. For the return to HG I just about managed to hang on at the back of the EG’s string while the hammer was put down all the way to Knaresborough. A short detour to the new Lidl on Chain Lane revealed some excellent quality cycle parking with Sheffield stands and a cover – all undone by their being in completely the wrong place. See what you think. Fifty miles today – a bonus for mid-December. Many thanks to Peter R for the route today. 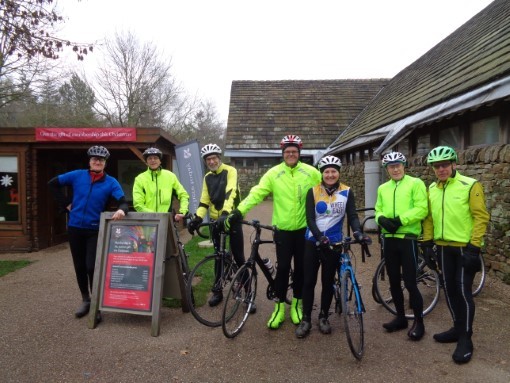 There was an excellent turnout of eleven EGs at Low Bridge, all raring to be off. We didn’t even need to wait until “Eric Time” cos he was with us. Must have been a tailwind down the hill this morning; he wasn’t even out of breath.
Someone cried Easingwold, and before you could say “Which way?”, we were off, carefully avoiding the lost greyhound which was charging around in its anxiety to be reunited with its parents on Abbey Lane. We never saw them.
The usual landmarks, Ferrensby, Ouseburn. the Aldwark Bridge, Alne, all came and went in a flash of sheer speed, and we soon found what was left of our group outside The Curious table, only to find no room at the inn.
No matter, there’s another café across the road. Oh no there isn’t; actually, it’s a deli/fish shop now; and I don’t mean the kind of fish shop where you ask for bits.
We did eventually get settled at the other (posher) end of the town, where the obliging and long-suffering staff coped with our café shock as well as with all the other diners, with good humour, and a witty repartee, if service a little on the tardy side.
No matter; there was a great atmosphere in the place and we were soon chatting to the other customers. Plus ca change…..
Texts were received from Dave P(2) who only had a morning pass and had diverted to Boroughbridge. Plaintive texts also from Chris; Where are you? Too far away from him, in Taddy I believe. Merry Christmas Chris.
There was little appetite for a prolonged return and we decided also to take the Boroughbridge route back. This was taken a slightly more sedate pace.
There was no refusal from many to partake of further refreshment in good old Morries, where further jolly conversations were had with the inmates (er sorry, customers); not the least of them a kindly old boy with a funny accent who told us that he had been a keen cyclist in his day, often riding 50Miles before lunch. He was from Norfolk, where we decided there were no hills but the wind was worse than here. (He should sit next to some of our riders).
Uneventful ride back to Knaresborough where as usual we went our various ways.
As always, to paraphrase Ratty; There’s nothing, absolutely nothing, half so much worth doing as simply riding your bike with great mates.
Thanks to Bill, who hived off pretty early, to Nick, so good to see you out mate, and who tried to keep up with us but dropped off the back, as he had told us he would. Also thanks to Eric, Colin, Tim (from Tollerton), Geoff, Peter N, good to see you out with us again Peter, Marvin, and Dave P(2) who diverted to other pastures. Dave S. 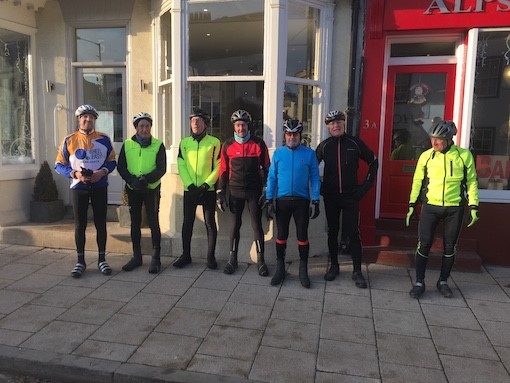