On a grey, blustery morning 16 Wanderers turned up for a ride to Fountains. Colin kindly offered to take the Faster Group. Immediately he set off a whole gaggle of eager gents pursued him, the rest of us set off at a more sedate rate to survive a downpour over the Stray and make our way along the Greenway. Every so often we heard a shout of ‘thank you darling’ as Mike the Vet passed walkers. Who knows what he said to prompt this response? At Ripley, we became 5 ladies and 2 Mikes when Mike Smith joined us. By this time the sun was starting to break through and we enjoyed a leisurely, chatty ride through Markington and onto to Fountains. Here we had a brief encounter with the gents who were just finishing their break and deciding which route to take back to Harrogate. The ride back through Ripon, Littlethorpe, Knaresborough and back to Harrogate was relaxed with plenty of chatting. As Liz said, an undulating but enjoyable route. We enjoyed meeting Patricia, on her first outing with the Wanderers. Thanks to Colin for volunteering to take a group. Alison N 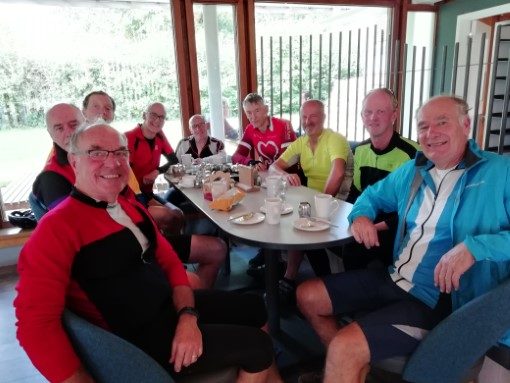 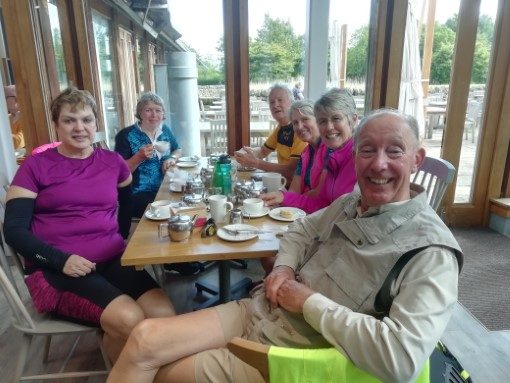 Somehow, I found myself leading the faster group of today’s ride. Seven soles decided to follow. Getting off to a good start it was precipitating quite heavily before we got to the Stray. The wind didn’t help and by the time we got to the Greenway we were grateful we’d already put on our waterproofs. Picking Mike P up at Bilton Lane we proceeded to Ripley but had to stop fairly quickly to avoid a small 4×4 with trailer just as we were climbing up to the track at Killinghall bridge. Onto Ripley and up Scarah Bank. By this time I was leading from the back which is where I spent most of the time. We got to Fountains pre-11 so it was very much a coffee stop. Here we discussed the route home. Despite the fact it had stopped raining it was agreed to give Skelton/Boroughbridge a miss. So, through the deer park into Ripon only to find myself at the front. Into Ripon I missed the turn but heard everyone shout. Back to the rear position. On to Littlethorpe, Bishop Monkton and Knaresborough. Here I left the group as I live in Knaresborough. Great ride and thanks to the rest of the group for your patience. Colin B

We rode through a downpour from Hornbeam to Ripley but we could see the sun shining ahead of us and eight of us headed to the toll bridge, Stripe Lane and Brimham to get some protection from the wind.
A good cycle down in to Smelthouses and into Pateley where we chose a new café, I think called the Old Granary tea Shop. Good service and good value.
Colin decided to test his recovered knees with a ride to Wath, the rest of us back to Bewerley and down the B road to the toll bridge. Martin testing out his battery strength and limit, tackled the horror of a climb past Grosvener House school, or whatever it is called now and the rest of us did Birstwith and the Greenway.
Sue and I visited the splendid Valley Gardens to view the new art installation which is covered up, we understand due to a spelling mistake!
A good ride despite the wind and lots of good sunshine. 38 miles, Gia 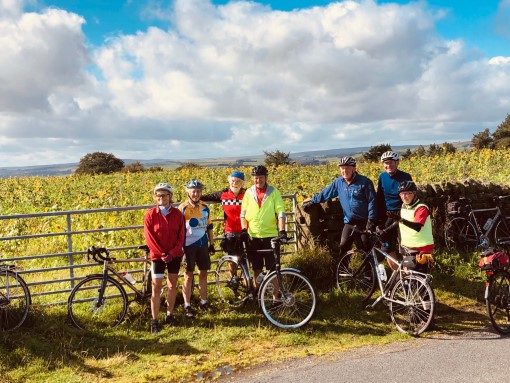 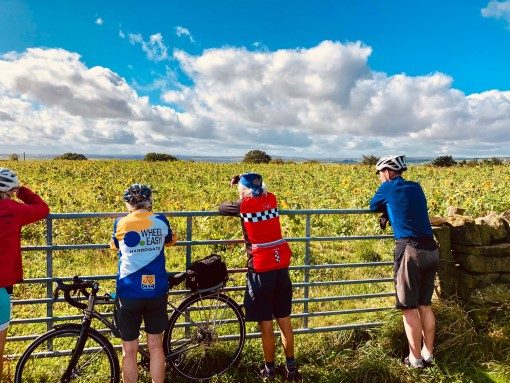 It was a dark drizzling day at Low Bridge, but despite that we had a good turnout, some riders on summer bikes with no mudguards, now there`s confidence in the weather forecast.
A suggestion was made that it would be nice to meet up with Chris Bishop and thank him and his wife Karen for their much-appreciated help last Wednesday from all those concerned over a leisurely cup of coffee.
Dave Siswick contacted Chris by phone and Chris agreed to meet us at Morrisons’ Café in Boroughbridge. this being easy to get to and close at hand.
The advantage of this particular café is that the coffee is always fresh, the individual sees to that and there is always plenty of room to stretch out, except for today when two riders had to share a seat (see photo).
After caffeine, calories, electrical fault tracing and a some laughs the “A” team headed for Masham. Dave P. 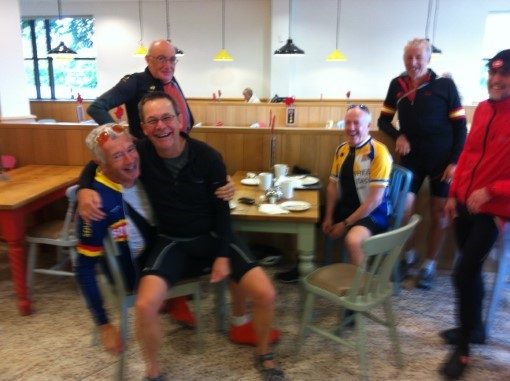 Really appreciate Dave P’s comments but what we, Karen and I did, well it was Karen really is just what mates do. I had intended to meet the others at Low Bridge but domestic chores got the better of me and I found that I was running late but more importantly where they were heading and set off to cut them off at the pass (Morrison in Boroughbridge). I had been struggling to fit rides in during late July and August and my motivation to ride my bike seemed a bit on the low side too but more of that later.
I arrived just after the group and joined the queue behind Daves S, W and P Nick, Colin and Geoff, another group had headed to Wetherby.

As disorganised as ever my enquiries as to our destination was met with smiles and shrugs. Dave W was appointed leader as we said good bye to Dave P and set off generally north and not too far east so the ride back would not be into a block headwind. I know we went to Topcliffe, Catton, Skipton on Swale and turned south at Carthorpe. As ever Dave W found and excellent route the weather was kind, the earlier rain meant I for one was over dressed.

The group stayed together well, a steady pace set to suit all, stronger riders doing longer on the front not faster than their colleagues. There was also the usual banter, Dave S had forgotten his pump and needed to get home promptly. The puncture gods were tempted when a suggestion that if Dave was going to have a puncture he should have it early while we were all still together. Is it just me or do you stop yourself as you are about to say something like “I haven’t had a puncture for ages” or “I remember in the old days punctures were much more common” for fear of somehow inducing a puncture?

To enable Dave S to get home in time we headed for Ripon Spa Gardens and Nick volunteered to ride home with him. Colin and I headed home via Fountains (no coffee stop) Geoff and Dave W headed to Knaresboro’.

I got home having had a thoroughly good day in a much better mood than I had started it. Perhaps it was the fresh air, the exercise, the beautiful countryside, the good company or being complimented on setting a good pace, probably a combination of all of these things. As I said to Karen when I got home and passed on the EG thank you’s ‘there is nothing like riding your bike while having your leg pulled to bring on a sense of well-being’.

We were lucky with the weather. It was dry all day with some sun and a pretty strong wind which was not too troublesome. Eight of us started and, fortunately, eight of us finished.
One of the toughest hills is out of Appleby. After that we went steadily among beautiful hills to our coffee stop 15 miles away at Acorn Bank – a National Trust property. A good place to stop and just look at the views from their front door. They told us that, even though we did not have to pay, if they scanned our NT cards they would get £2.50 for the property for each of us who gave them a card. Worth noting.
Then we went through villages with names as lovely as they looked – Morland, Maulds Meaburn, Crosby Ravensworth. Then up a long climb before a fabulous downhill (Brian hit over 42mph) into Orton for a late Lunch. Orton Scar café is a great place for lunch if you are passing.
With only a further 15 miles to the end, we all enjoyed the ups and downs on the rest of the ride. We did a little detour to a mill and waterfall at Rutter Force just before Appleby.
A great day out. Thank you for the company and many thanks to whoever designed the route. Steve W 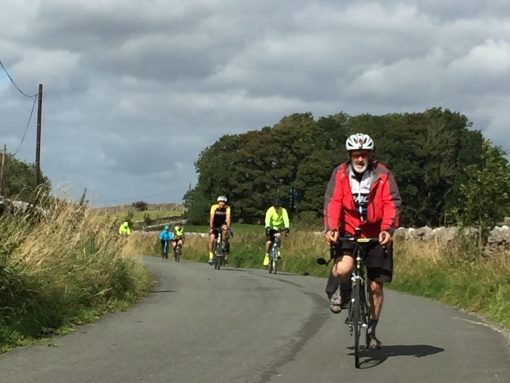 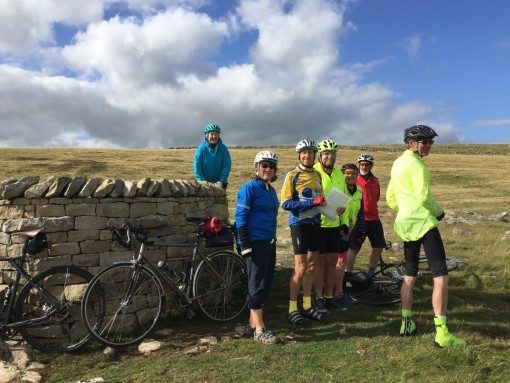 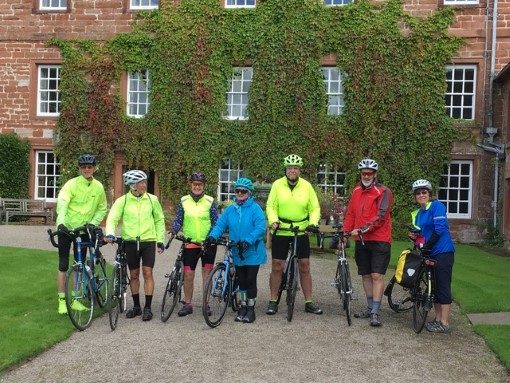 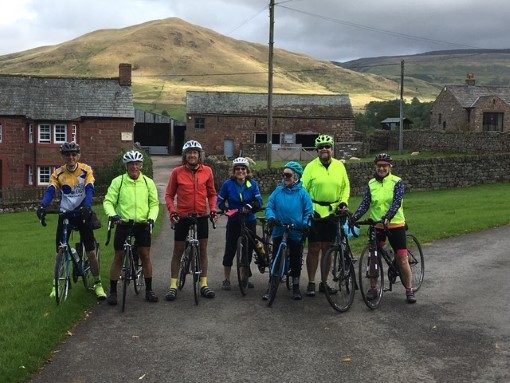 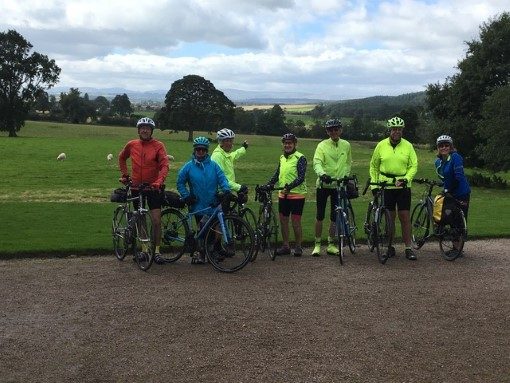 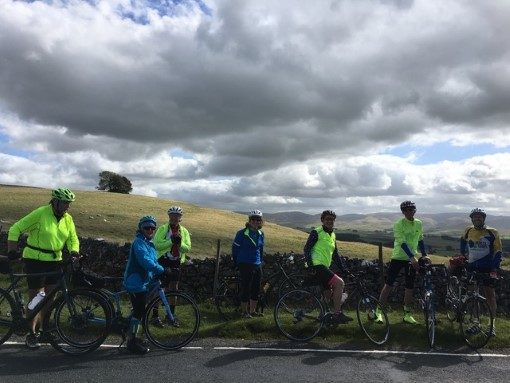