Nine of us for the short ride today, with a smattering of electric bikes. Hints of sunshine and not much wind. Through town to the ASDA cycle path, Dragon Bridge and the Greenway to Bilton Lane and the Beryl Burton down into Knaresborough. Waterside was predictably busy, but we wended our way to Boroughbridge Road and then into Old Scriven where we took the first photo of the day. On to Lingerfield and Scotton, where we took the second photo with the ‘Banksy’ on the side of the Guy Fawkes Inn.

Right onto the busy road between Knaresborough and Ripley, then right again on to the quiet road towards Nidd, the A61 and Ripley. Dennis, Brian, Sue and Paul left us at Ripley, and the remaining five went through Hollybank Woods to Sophie’s. Pleasant craic and refreshments partaken, back to Harrogate up Hollins Lane and Knox. Paul B did his Good Samaritan bit and dropped something off for Crawford on the way back. 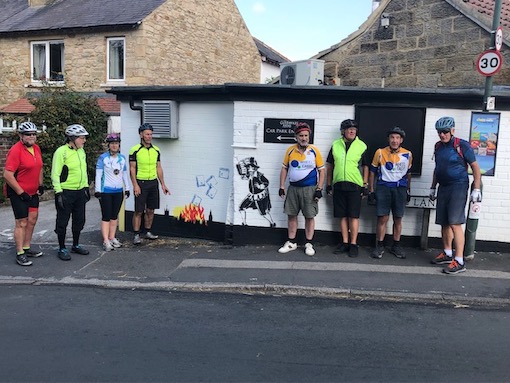 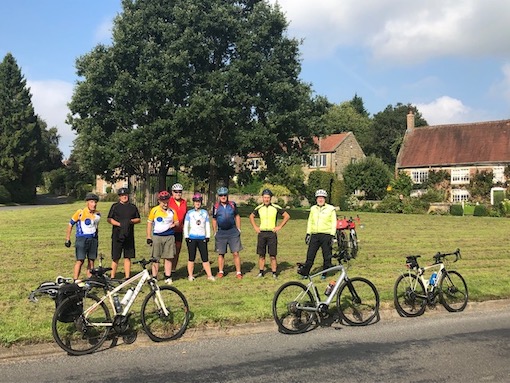 Nine riders were keen to take on the relatively hilly Medium Ride today.  Before leaving the Show Ground car park the leader was faced with the dilemma as to which route to take to get to the Greenway.  Was it going to be back to Oatlands Drive and then to Dragon Road or through the Saints, and a walk through the ginnel then to the Stray? No, the direct approach was called for so it was along Wetherby Road, across the Empress roundabout and right down Claro Road, much to consternation of some riders.  Travelling along the Greenway we overtook two Wheeleasy renegades (Jen and Caroline G). By the time we reached Ripley we had collected two additional riders. The ride proceeded without incident along the prescribed route until we reached the environs of Brimham Rocks, and after a vote by a show of hands, we headed for G & T’s via Sawley for some well-earned refreshments.  By this time the sun had come out and the riders were in a very relaxed mood as we left the tearooms. The return route back to Harrogate was again incident free. PCJ 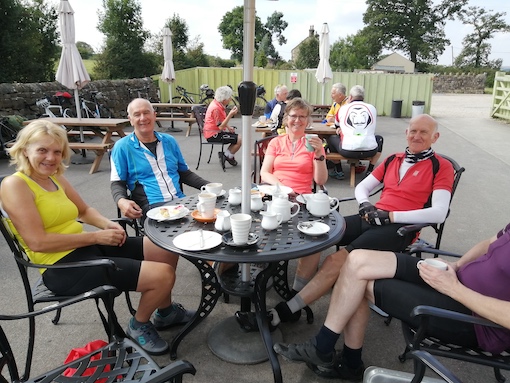 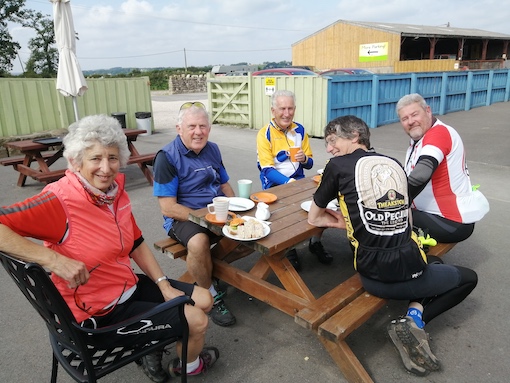 Just to be clear, this was Monica’s idea.  She felt that we “Not So Fast Girls” should do something big before the end of summer, hence our offer on the website.  There were a fair number of fast boys and girls at the start who soon set off in a cloud of dust and, when it settled, just Monica and I were left standing.  We gave ourselves the Billy No Mates of the Day Award and set off!

Our ride can be briefly summarised as a 70 mile chat with White Horse Bank in the middle and a café stop on either side.  It was a glorious sunny day and fortuitously the whole of White Horse Bank was in dappled shade which made for a pleasant, if demanding, ascent. The subsequent descent down Sutton Bank on the A170 was just as ghastly as you are all imagining.  We soon escaped on to flatlands through Osgoodby, Balk, Bagby, Dalton, Topcliffe and Asenby.  We were momentarily confused in Asenby but sorted it out by logical deduction, an OS map and knowing where the sun was (sinking slowly in the West if you must know).

We did pause in Boroughbridge for a quick top up of tea and calories before heading home via Roecliffe, Bishop Monkton and Copgrove.

Definitely a grand day out and thank you Monica for suggesting we give it a go.  Thank you too to the nice young man in the café at Coxwold who we accosted to take our picture.   Helen. 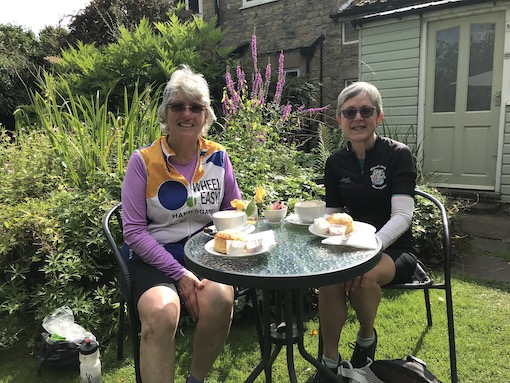