Easy. Gentle. Slow. Agreeable. Such are the short rides. With this in mind we waited for the mamils and pilocs* to speed off to their distant horizons before we twelve sauntered up the Greenway to Ripley. The warmest February since God was a lad had given way to a slightly nippy start and, half an hour before the end, to light rain.
The back marker and her cronies eschewed to bonus loop around the Brearton metropolis, preferring to make progress and wait at Scotton. Thence to Lingerfield, Scriven and the café stop in Knaresborough (only six of us). We weren’t done yet. Route 4, for such it was, demands a finish via the Beryl Burton to Bilton Lane and Claro Road.
20 miles inc. the Brearton loop, with the finest back marker in the business, CG.
Forgot the photo, but perhaps the attached pic of our new painting will do.
(*pensioners in lycra on cycles.) Paul B 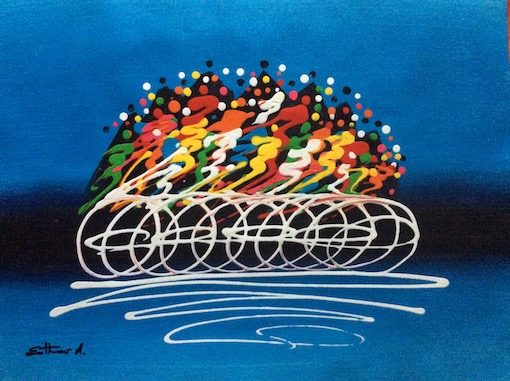 Nine riders chose this hilly ride – some aware of the predicted rain, others needing to get back. We set off towards Little Almscliffe and quite naturally split into 2 groups with a distinct gap! We agreed regular rendezvous spots as we made our way past Menwith, down Sheepcote Lane, along to Hartwith bridge, up Stripe Lane and onwards to Brimham. We agreed it’s a lovely route, even on a grey day and despite the hills. Once at the far end of Brimham, it was downhill all the way to meet at Ripley Café. We had a cheerful coffee break at Ripley and were quite impressed with the efficient service. While in the café, the forecast rain had arrived, so it was a damp ride along a quiet Greenway. Thanks to all for your company and support [especially with my chain problem]. Alison N 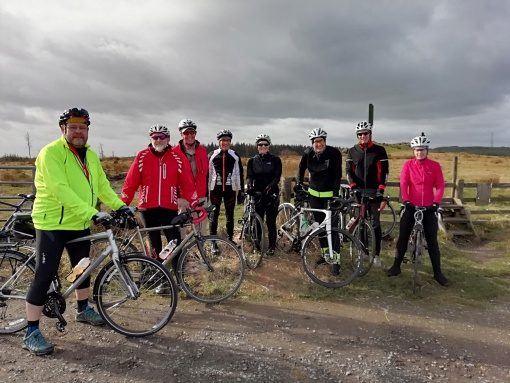 Tim kindly offered to lead a brisker paced group of ten and, after they departed from Hornbeam, that left a group of eight for me to lead. The forecast was for a dry morning with rain predicted after one pm. With that in mind we set off at a reasonable pace towards Fountains Abbey. Kevin said farewell as we turned off to Aldfield as he had to be back early, and the remaining seven riders carried on towards Low Grantley. On our way we found a puncture repair group of three from the brisker group on the road side. Tim assured us they could manage and asked if could we team up with the rest of his group waiting up the hill. As we approached Grewelthorpe the puncture repair group reappeared and the brisker group regrouped and departed once more. We met again in Masham – alas not enough room for us all in the popular Johnny Baghdad cafe, but our group enjoyed a pleasant lunch in the Border Tea Rooms. When we emerged, the rain had just started and we made our way as speedily as possible towards Ripon. The rain was fairly consistent and at Bishop Monkton we made a decision not to go to Markington, but to return the quickest way to Knaresborough. At this point Debby was feeling quite poorly with a migraine. The caring team Wheel Easy spirit was quickly shown – Jill supplied some paracetamol and Mike gallantly gave her his lovely warm beanie. By the time we reached Sandy Bank, Debby declared she felt like a new woman! We bade a wet farewell in Knaresborough and there were several conversations about looking forward to a really hot shower on reaching home. About 53 miles Monica W 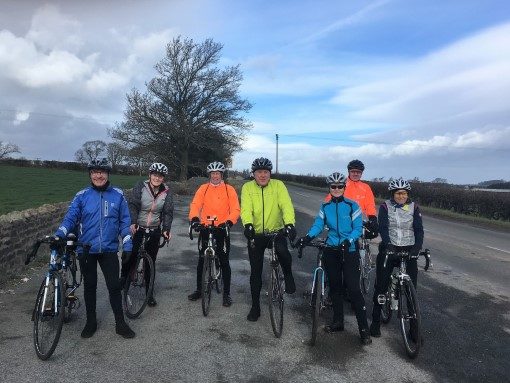 An enthusiastic and ebullient eight riders (Rob, Fred, Declan, Angela, Collette, Michelle, Vince and myself) set off ahead of the main Medium Plus group and made good progress through the usual route to Ripley and past Fountains and onwards. Then a puncture to Fred’s back wheel meant a necessary delay made worse by the tyre being frustratingly truculent. The main Medium Plus group came past and for a while the two groups merged. The suspicion that tables might be sparse in Masham and Collette’s nose for a good coffee saw us ride off the front again with the result we snaffled the few seats available in Johnny Baghdad’s café. After generous portions of beans on toast for Rob and Declan and two coffees apiece for Michelle, Angela and Collette the group emerged into a rain threatening Market Place (photo) and off back home. The rain soon started but was light until the road to Markington and then continued all the way home. Some tired legs and wet backsides (for those without mud guards) by the time we sashayed back along the greenway. 55 miles for me but Rob was cycling to and from Leeds so more like 75 to 80 miles for him. Tall Tim. 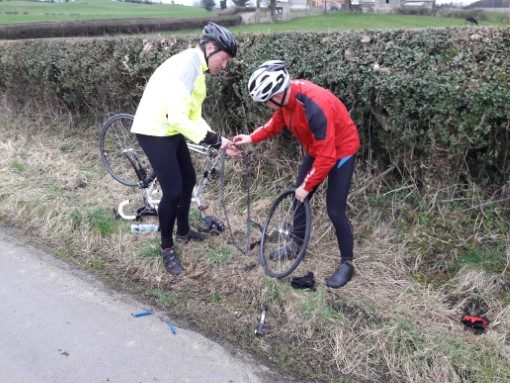 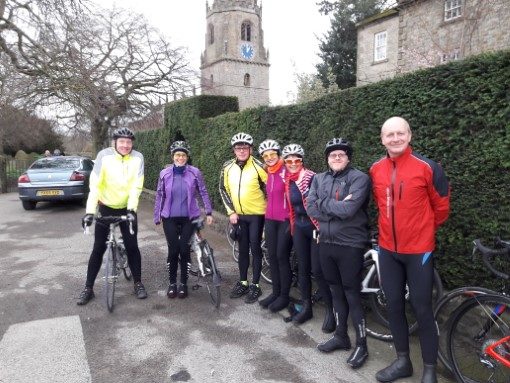