On a nice sunny morning 23 Wanderers were ready to set off on a hilly ride to Pateley Bridge. We split into three groups, Mike leading the first ‘brisk group’, myself the second and Joe the third, a few riders had said they would be leaving at various points for shorter rides.

Heading down to Oakdale on a rather rough road now, then on to Penny Pot Lane where Mikes group caught us up! Due to the warm weather they diverted around the cricket club for a rider to leave his coat in his car, then off they went ahead of us.

Then a steady climb towards Greenhow, turning right towards Yorke’s Folly, it was nice to get a cool breeze blowing to cool us down on the climb, very unusual for February! At Teacups we met up with Mikes group and decided to return from Glasshouses turning left at Wilsill to Smelthouses and Brimham Rocks, taking in a couple more hills, rather than the planned route on the B6165, then Burnt Yates, Clint and the Greenway back to Harrogate.

A very good ride in warm sunny weather with some nice views around us and plenty of chatting. 35 miles, 2,426ft. elevation. Chris R. 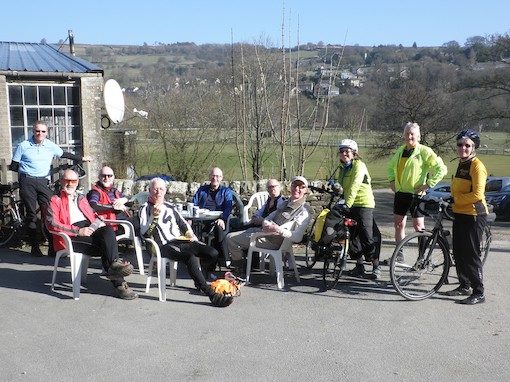 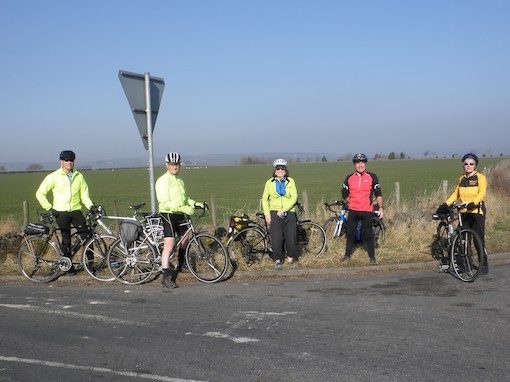 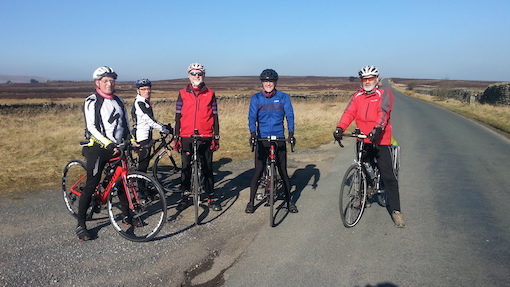 Three of us joined the incoming group, of around twelve, from Hornbeam at Farnham and with an obvious appetite for a few more miles today on another glorious winter, yes winter, day, discussion on a one or two stop re-fuelling strategy ensued before heading of on our way to Masham. I must leave the full route detail out as our trusted & knowledgable ride leaders who amaze me every week do that much better & I follow. However, I do know we went via Ripon, Galphay, Grewelthorpe, Swinton to a really bustling Masham market square & one stoppers enjoyed the delights of Johnny Baghdad’s Café, great food, coffee & service. Back via Ripon, Fountains & Ripley most riders completing around 45 miles. Thank you to all for their company on another great ride which I hope you all enjoyed as much as I did. Alan S 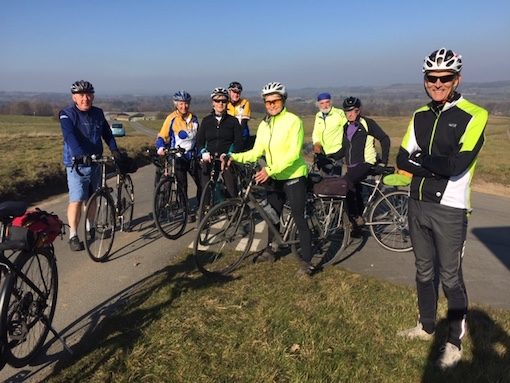 Alternative Ride to Masham
A dozen or so of us set off from Hornbeam down to Low Bridge and Abbey road. Ironically the route I had used from home to Hornbeam – the exercise must be good for you, and it’s easier in reverse! We gathered at the top of the hill past Farnham where Colin, Alan (+?) were waiting for us. Fifteen riders being too big a group, a split was agreed – those stopping for coffee in Ripon and those riding through.

I headed off behind Helen and Janet, by the time we looked back to see who had joined the party, there were only four; after Bishop Monkton, Tim and I paused at the Littlethorpe turn for anyone catching up as we were going straight on, but carried on after a minute. The pace was however best described as err .. brisk.

Helen did a great job with route choice, we turned immediately left over the bridge in Ripon down Borrage Lane, on to Galphay and Grewelthorphe but agreed a diversion up Nutwith Lane (Photo stop) to descend to Swinton then on to coffee at Bordar House in the sunshine. Fairly direct back going through Well, West Tanfield, Wath, Ripon and pause at Bishop Monkton. A team farewell, and the ladies headed for Markington, while the lads went to Knaresborough. Throughout the ride, all were revelling in the glorious weather and scenery; what a great day out. 57miles, 2100ft climb. Allen B. 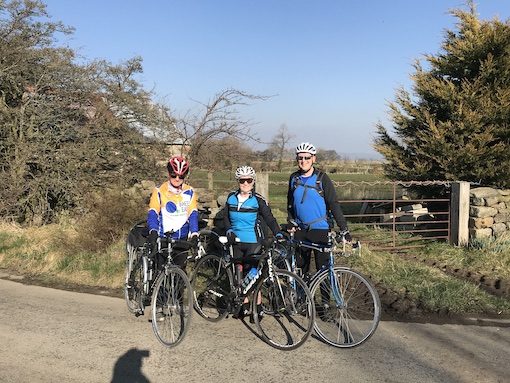 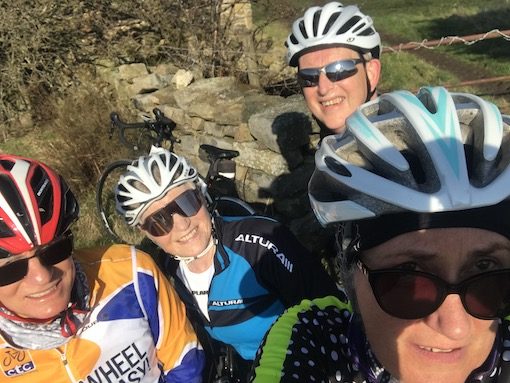 With the weather still set fair for another day, pre-ride plans were for a trip to Yorkshire Arboretum tearoom at Castle Howard, taking in some of the back lanes of the Howardians.  At 70 plus miles it would be the biggest ride of the year for most, but the sun brought out nine of us and set us on the road to Farnham, Arkendale and Aldwark Bridge.  So steady was the pace and so benign the conditions, that we arrived at Curious Table in Easingwold with barely a hair out of place and in good time for genuine elevenses.  Among other topics, Peter R gave us an insight into the variable quality of local art appreciation classes, a theme revisited at lunch.

The ride leader’s intention was to avoid climbing up Yearsley Bank, by diverting north to Oulston and then climbing the lesser gradients of Oulston Moor.  A turn was missed and we found ourselves on Yearsley Bank as not intended.  Used several years ago on the Tour of Britain, the climb was long and hard but achieved in good order by all – at least we were on the top and could enjoy relative flat for a few miles across the Howardians.  Thus it proved until the narrow lane from Coulton to Scackleton, where the gradient of Scackleton Bank was surprisingly steep.  But soon we were passing the Lavender Farm on our way to the Arboretum, along a road surface that deteriorated into a bumpy track in places – assumed to be the combined impact of tourist  and forestry traffic.

Turning right at the obelisk brought the highlight of the day in the “Brideshead” view across the lake to Castle Howard in the heat haze (with added pollutant cocktail, presumably).  Lunch on the Arboretum tearoom terrace followed, with Peter R resuming the topic of art appreciation courses and the contrast between the offer available locally and that available in London galleries (unfair comparison?).  A lament followed concerning the rough deal overall that the provinces get compared with the capital, but maybe we all subconsciously remembered that a venue like Castle Howard is just little harder to find in London, especially on a bike.

After a couple of sharp climbs on the way to Sheriff Hutton, including the reputedly more benign face of Bulmer Bank, the road was familiar and flattish to Knaresborough, where the farewells started, ending in the final split at Forest Lane Head at c 4:45 pm.  A long day of almost 75 miles (to/ from Hornbeam) but, judging by the warmth of the farewells, one enjoyed and celebrated by all. Terry S 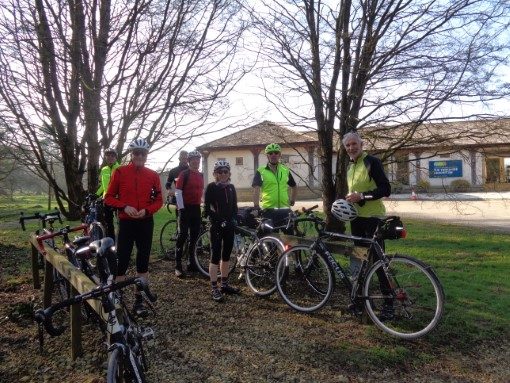 The weather was to be as good as yesterday if not better, and we had a fair mixture of EG`s and Wheel-Easy Wednesdayer at Low Bridge. Away went the Wednesdayers first the EG`s “A” team followed by the “B” team consisting of Dave P and Norman with Eric W guesting for us. Then in to Wetherby Morrisons Cafe for caffeine and calories and a team photo (see attached). The “A” team headed for somewhere northerly, the “B” consisting of Dave P and Norman (quality not quantity) headed for Askam Richard and the Grange Cafe for afternoon tea, the teacakes were a little small, but were made up for with lots of butter and lashings of homemade jam. The weather was glorious and clothing was divested (within reason of course), back home in the sunshine with a light wind to help to keep the temperature down. The tourists were out in Knaresborough in the sun, a man was seen in only shorts and shoes and Norman knew him ???, perhaps the lad needs a little chat about who he mixes with? A very nice relaxing ride in the sun. Dave P 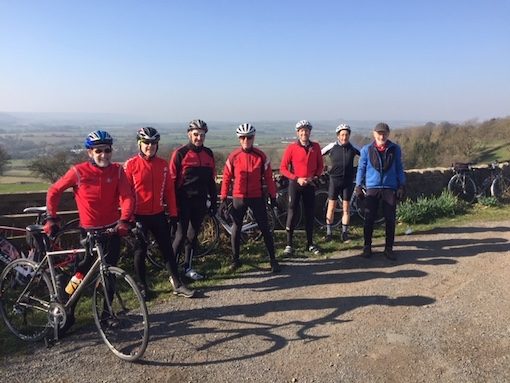 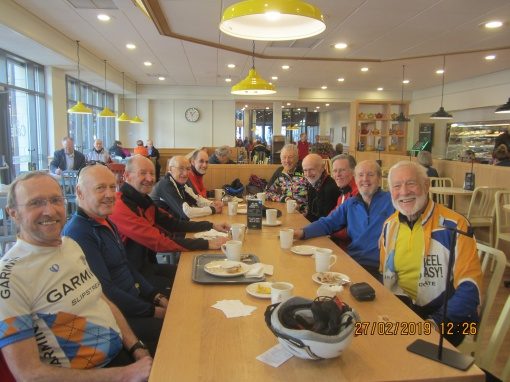