Amazingly 5 people had read the kinder weather forecast today and decided it would be a lovely day for a cycle. Jean, Rachael, Monica and Caroline turned up to poddle off to Boroughbridge….accompanied by returning man with the pink bike who now had an orange bike… welcome back.
Briefly we quickly reached the Bean café Boroughbridge in pleasant greyness…. we ate glorious cheese scones…. jumped back on our bikes as the rain gently started…. headed back to Knaresborough as the rain set in and arrived back home as quickly as possible to dry off and warm up. 24 miles…. a satisfyingly pleasant bit if exercise with jolly company. Thank you all for your patience. CG

Considering the dire weather forecasts the Wanderers had a good turnout of ten today. We split into two groups with five ladies in front and five gentlemen staying behind in case any of the ladies had bike problems. On the Greenway a lady did have a slight bike problem but she fixed it herself as the cavalry arrived. The route was Hollybank Lane to Clint where Dave and Steve headed straight for Brimham as they had short time restraints. The group of eight then headed to Birstwith, over Hartwith Tolland up Stripe Lane to Brimham and up to the Ripon – Pateley road. We had seen a bit of sunshine and enjoyed lovely views but as we headed down Sawley Moor Lane, through Sawley we had a rain shower but none were too wet when we arrived at Risplith. The faster group of five who had left Hornbeam were now seven and were just finishing their coffee/lunch as we arrived so after a quick catch up, they headed off homeward. The steady group were soon served and set off back via Sawley, Low Gate Lane, towards Fountains but then Watergate Lane (where there was a delay due to egg purchasing) and back to Ripley. We passed through a number of showers but not a real soaking so it was agreed that we had had a good day out. We were joined by Malcolm and Gia near the end of the Greenway. 35miles, 2316 feet. Thanks to Colin for back marking. Liz Pugh 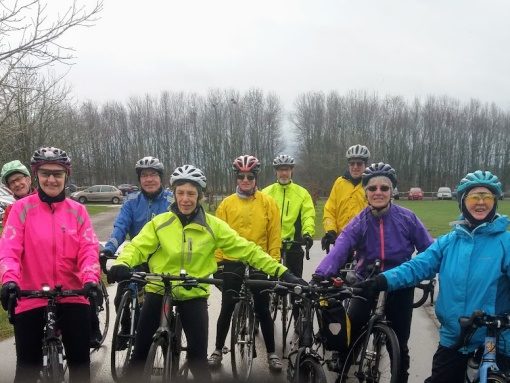 Mike P and I were waiting at the Bilton Lane / Greenway junction having made our way from K’boro up the Beryl Burton. The first group of 5 to arrive were being led by Zoe; after some abuse from Tony for short cutting, we all headed off on Liz’s designated route to Brimham. Mike W took over the lead from here and a made a no nonsense Beeline for the coffee stop at G&Ts. The main group of Wanderers arrived as we were finishing, Liz advised the best homeward route, and we headed off – in a bit of light rain that had started during our break. Tony suffered a puncture on Watergate Road where there was a lot of building debris (it is Road not Lane!), Tall Tim and new(ish) member Nigel, helped Tony – the rest had gone a hill too far by the time I notified them. The main task was fixing it before the main group arrived – success. Photo stop was the bus shelter in Ripley. We split up again at Bilton Lane to make our various ways home. Thanks to Zoe & Mike for leading the group, and welcome Nigel – we home to see you again soon. Allen B. 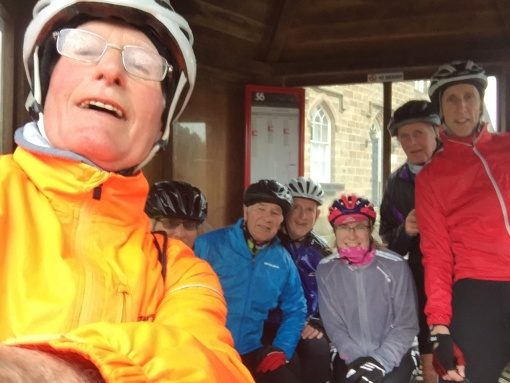 Seven of us started in relatively dry conditions with the rain holding off so we headed out via Ripley and Bishop Thornton to Fountains Abbey Visitor Centre at a nice steady pace in mild conditions. Here we discovered the main toilets are closed for refurbishment and the bike stands are being replaced with something more “in keeping” – those are the words of the NT member of staff! The cafe is all rather pleasant after the refurbishment and we enjoyed the usual coffee etc. Then to the smart new downstairs toilet and the big challenge of the day, how to operate the new-fangled combined taps and hand-driers. Once mastered they are excellent! The party split up from here with Sue and John returning on the same route homewards and the rest of us determined to continue upwards to Sawley and towards Brimham Rocks. Then we turned down the lovely long hill to Warsill and by now it was raining quite a lot, so much in fact it washed off most of the mud accumulated early on the ride. We returned to Ripley and along the Greenway then home for a nice hot cuppa. 30 or so miles. Apologies for the lack of photo, blame it on the weather. Martin W.

The weather forecast said (well mine did) heavy rain at 9-00am, however non was in sight at Low Bridge.  We had Bill W, Dave Preston not Peatfield who is a first teamer and Norman and Dave Watson not Wilson to be picked up on Waterside.
The “A” had made an early start as being the first Wednesday of the month to get a good long one in.  Whilst waiting we were greeted by Caroline and Ladies who Poddle plus one Gentleman (lucky man). The four of us headed for Boroughbridge aided by the wind.
On the Occaney downhill freewheel it must have been still there, because Dave P for the first time freewheeled up and over the hill (yes, we know he is) and for one moment thought he might have been blown into Morrisons Cafe.
After a nice relaxed chat in comfortable armchairs we headed for Ripon with an intended cafe stop at Spa Gardens Cafe, we had a nice relaxed ride to Ripon Race Course where we had a little impromptu meeting on the canal bridge, and it was decided to head for home. (good call, in fact a very good call). It then started to rain, then it started to pour, then it absolutely started to wee wee it down. On some roads the bow waves from traffic were quite impressive. Our thought then turned to our “A” team mates and where were they? honest Lads we did not laugh.
Not a day for photos, but an excellent relaxed ride with lots of chat. Dave P.

It was not a promising start to the inaugural EG’s Long Ride: over the past few days the weather forecast for today had improved somewhat from absolutely dire to moderately dire! Nevertheless, the ride was very well supported with nine riders setting off from Low Bridge at the unearthly hour of 9.30am, picking up another rider at Piccadilly Motors, and 2 more as we passed through Boroughbridge, (please note: the EGs really did pass through Boroughbridge without a coffee stop at Morrisons!!!!!). So, for most of the ride we were 12 strong, seven EGs and five Wednesday Hornbeam Park Long Riders (Terry S, Richard and Lesley S, John S, and Richard L). It was good to welcome guest riders to our ranks, which also proved that you don’t have to be Elderly, or even a Gentleman to come on an EG ride – all riders are very welcome!
Our route continued north to Topcliffe, and then to Skipton on Swale, Ainderby Quernhow, and Pickhill where we diverted for about 880 yards from metalled roads onto an unmetalled (i.e. muddy) bridle path, including an old railway bridge on the former Leeds – Ripon – Northallerton railway line crossing the River Swale, (see photo). The line was closed on 1969 as part of the Beeching Axe, and the absence of any maintenance over the past 50 years is obvious as you can see the river below, should you care to look through the numerous holes in the bridge’s metal deck! We returned to metalled roads at Maunby, and then to Newby Wiske, Warlaby, and Northallerton for our lunch stop at the Terrace Café. This delightful café, hidden away up a narrow alley off the High Street, coped admirably with the sudden influx of 12 hungry cyclists. The two staff were extremely quick, efficient and cheerful. They had fully deserved our return visit.
When we came out of the café, the promised rain had arrived and stayed with us for most of the way home. Shortly before Boroughbridge we had an incident. On the wet roads, awash with many puddles, one puddle masked a pothole, which Dave P(ii) drove through, only to find he was ejected from his bike. The result was a very heavy fall, ripped cycle jacket, bruised knees, cut thumb, and buckled wheel. Team mechanic Dave S got to work with a spoke key and trued the wheel sufficiently to get Dave home. The sirens of Morrisons Boroughbridge attracted six of the riders for an afternoon tea stop.
I arrived home at 5:45pm having completed 81 miles, my longest distance this year. It had been a good start to a new era in EG rides. Eric. 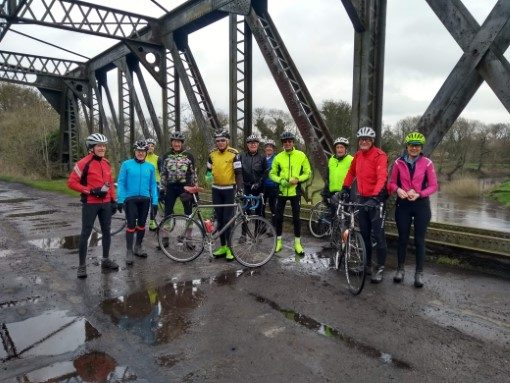