Six optimistic Wanderers rode out from Hornbeam on route to Clifford and back. Rain clouds turned to rain as we headed towards Kirby Overblow but as we gained higher ground the clouds lightened and distant hills came into view. The weather was improving!
Despite the favourable situation we could not persuade Alison to join us beyond Wetherby, so after enjoying the pleasant ride across the top via Sicklinghall and Linton, she left the five chaps to continue their ride south, but not before we stopped for a photo near the old railway.
The ride beyond Wetherby was met by strong winds and we all had to push hard on the pedals along the cycle path towards Clifford. There was time for another brief stop and photo at the Clifford war memorial before turning north through Boston Spa and on to the café stop at Thorp Arch. No queues on such a day, other than in the photo comprising only us. We could have had a table each, but being a sociable bunch of Wheel Easiers, we sat together and enjoyed the coffees and bacon butties.
From Thorp Arch the familiar route alongside Wetherby race course and via Kirk Deighton brought us to Little Ribston where I left Chris, Tim, and Mike to head for Harrogate while I joined Colin on route towards Knaresborough. As we approached the River Nidd the sun broke through for the first time in the day.
A fine ride of about 30 miles in good company with improving conditions, and plenty of room in the café. Mike P 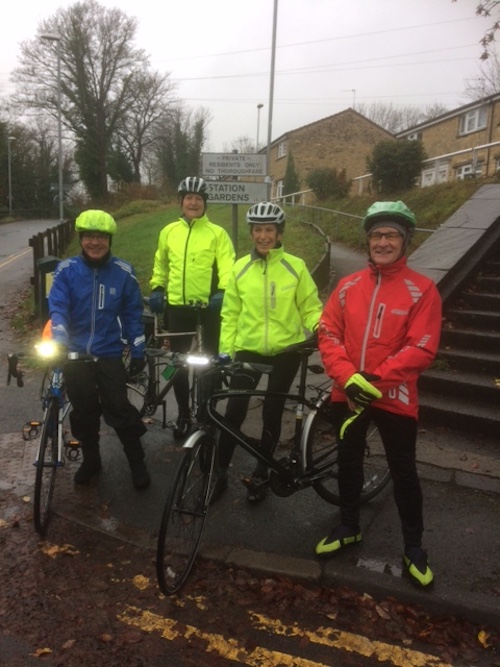 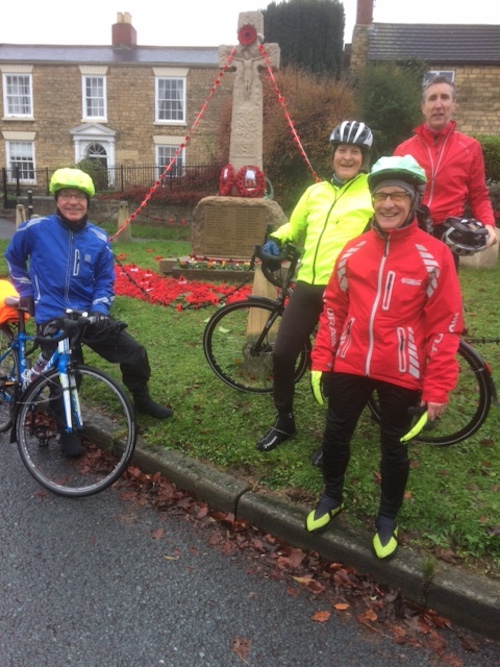 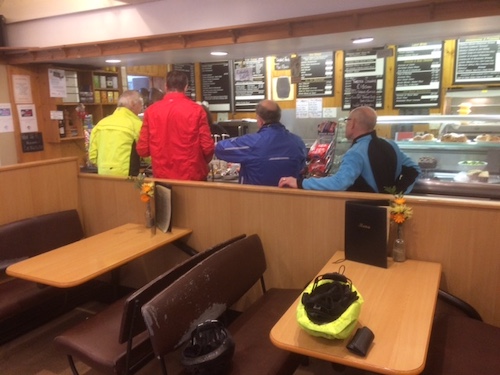 As stand in Ride announcer it was not too onerous as only eight riders had braved the weather and arrived at Hornbeam.
With rain and winds forecast there was definitely a requirement for a short ride and the Wanderers set off towards Wetherby and Thorp Arch and the Wednesday riders (all three of us!) headed for Little Armscliff and Sophies.
Whilst it was not cold it was miserable with rain and some winds (behind us up to Little Armscliffe) and we then decided to head back along Pennypot Lane and head towards Hampsthwaite via Kettlesing which was a much quieter route as there was still some fog and mist on the tops.
We arrived at Sophies and met up with Martin who had diverted from his shopping trip to join us for coffee. We enjoyed the warmth and the chat but eventually had to set off back,
We shunned the Clint/Greenway option and headed up through the village and then back to Harrogate via Knox Lane (Paul T left us at Killinghall to return home) and then onto the greenway and across the Stray home -with the weather brightening!
An enjoyable ride in better weather than we expected. Only 25 miles but still worth being out on the bike and not as bad as we had feared. Thanks to Gia, Paul and Martin for the company. Kevin D 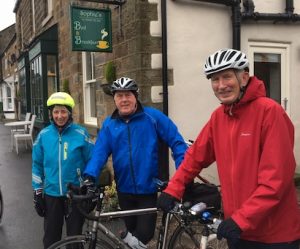 The bleak weather outlook caused us to move our meet 100m down the road this morning to what seemed like a more sheltered venue. Even so, there was a goodly turnout of nine who were up for a day out.
Peter B decided that our plans were too soft for him, and set off at 180deg to us looking for hills. Bob said he would follow us a far as he could but for us not to wait. Good to see your traditional steed in use Bob.
The magnificent seven set off, in a mood which reflected our Government; everyone with a different idea of the destination, and weak leadership.
Tadcaster was thought to be a good idea, getting as far upwind as possible in true sailing fashion, and the Lemon Tree was soon reached for the customary warm welcome. Watch out for the flags out back though, slippery as an ice rink when wet. Representations have been made with a request to pressure wash them before someone gets hurt.
Onward then into the splendidly quiet back lanes of Yorkshire; waterproofs off; waterproofs on, the latter being the better insurance against the rain, as it was today for us.
Poppleton came and went, all deep in conversation in true club riding fashion, and via the riverside cycle path to Beningborough Farm Shop, where a cheerful welcome awaited us, and the biggest, bestest plateful of beans on toast ever seen known to mankind was presented to yours truly. Someone must have tipped them off about my proclivity. Six out of five is the score (see photo).
We were having such a convivial time that we had not noticed that the heavens had now opened and the promised precipitation was now on us.
Dave W and Chris had not stopped at the café; Dave had a curfew of three o’clock, which I later heard had been achieved.
The rest of us togged up, knuckled down, and pressed on home as fast as we could; it was not too bad as the Southerly was now generally behind us.
Thanks Dave W, Chris, Dave Rowson (who left us in Taddy), Dave P(2), Tim (from Tollerton), Geoff, and Colin; I am fairly reliably informed that we totalled 99km. DaveS. 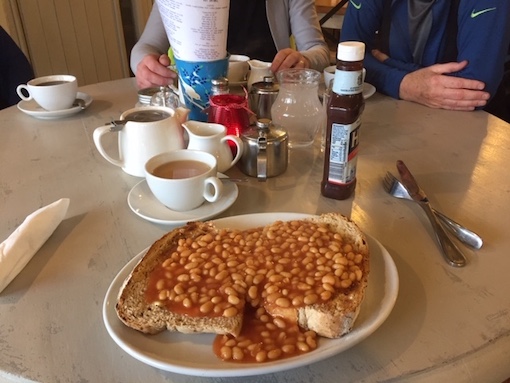