FIVE people chose to Poddle today…a gentle meander to Boroughbridge was on the cards. Sue departed after a few miles to go and eat a neighbour’s birthday lunch at Betty’s. Coffee, cheese scones and a bacon and egg sandwich were rapidly consumed after which we headed for Roecliffe where we went to view a man hard at work…. despite his partner having a day off. Then as we saw the most interesting horse outfit of the year…. two horses dressed as zebras…. a wonderful fancy dress or a clever disguise or a brilliant fly protector….
Graham then left us to get to an appointment at the Turkish Baths. As we cut through the Mountgarret’s garden we were overtaken by a force of Wanderers then we mingled and had another chat with chuckle of Wanderers. At Ripley Monica decided to do some more miles and Jane and I slowly negotiated the Greenway. A glorious day with a gust of a head wind…. about 28 miles. CG 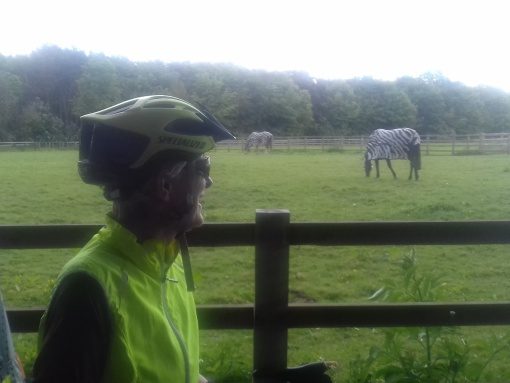 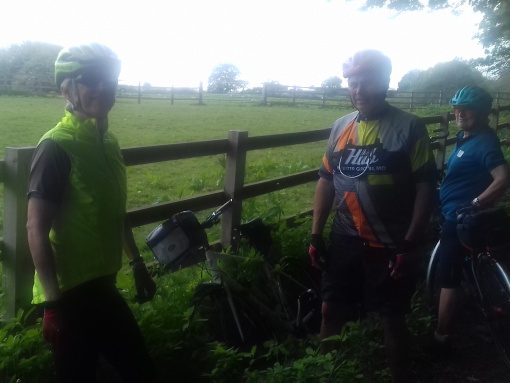 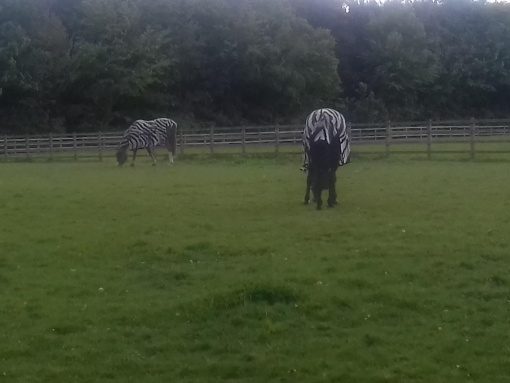 A warm sunny morning brought the Wanderers out in force for a ride to Ripon. The Greenway was busy as we temporarily joined up with a group of cyclists from Keswick who were enjoying the delights of Harrogate and North Yorkshire. We soon crested Cut Throat Lane and enjoyed the descent to Markington. A show of hands meant Spa Gardens was chosen as the coffee stop and everyone enjoyed sitting outside in the sunshine. The return was via Littlethorpe, Burton Leonard and Mountgarret Estate, Nidd and back along the Greenway. Thanks to Mike for back marking and photos. 35 miles. Keith Mitford. 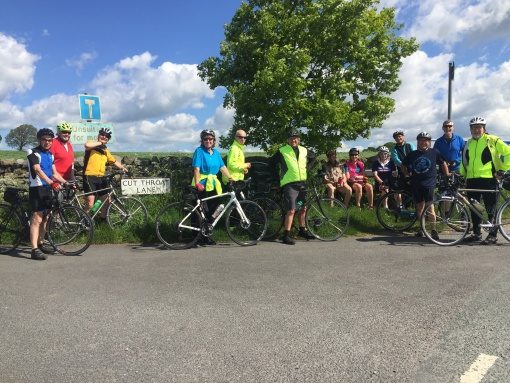 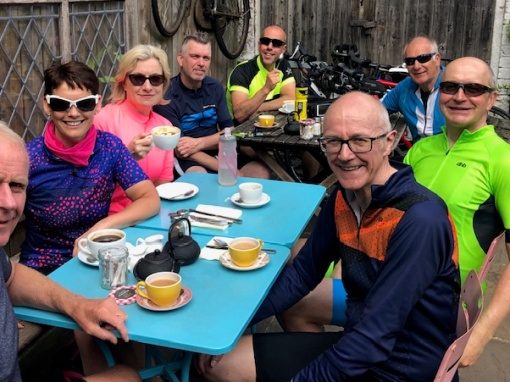 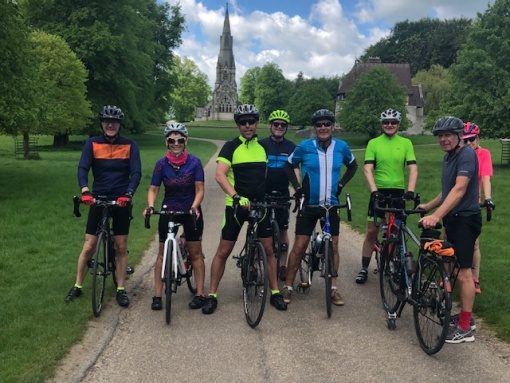 Following a great call from Sue C for a ride to How Stean Gorge, 11 riders headed towards Nidderdale on another glorious spring day. Our route took us via Ripley, Fountains Village, Aldfield, & Grantley, where 3 of our group opted for a shorter ride due to time constraints, then onwards to Dallowgill Moor, over to Wath and up the dale through Ramsgill and Lofthouse to How Stean. The café has undergone impressive modification with wonderful views of the gorge from within, particularly via glass floor panels. Good food perhaps not quite matched by the coffee offer which, after inflicting 28 miles of coffee depravation, did make me a little nervous on my first ride as leader, I promise to try harder. Could the views of majestic Nidderdale from the high roads possibly be matched anywhere? Oh yes, only by those whilst riding leisurely down dale on the low road with light breeze behind, simply beautiful. Returning via Pateley Bridge, Bewerley, Glasshouses (losing Colin who couldn’t resist the call of Brimham Rocks), Summerbridge to Birstwith via toll bridge, Clint Bank, Ripley & Greenway to complete, for Harrogate riders some 52 miles. Thank you to all for a lovely day, exemplary behaviour considering coffee crisis & for being so supportive. Alan S 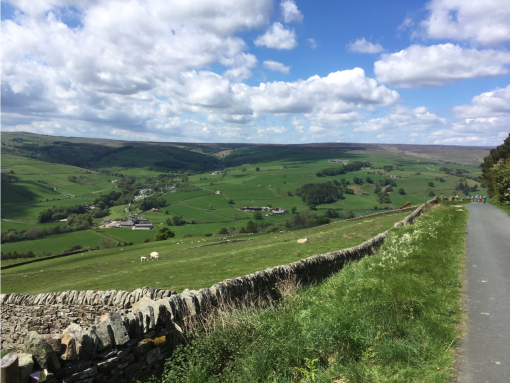 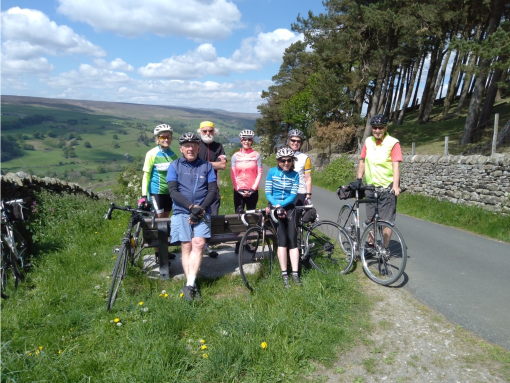 Only three regulars turned out for today’s Long Ride but were joined by a prospective new member Peter Z, you cannot have to many Peter’s. Following the EG’s report of a decent café in Bedale we decided to give it a try. So, it was off to Knaresborough at a brisk pace, Ripon came and went followed by Wath and Carthorpe. The pace remained high until we reached Bedale despite the annoying cross wind. Then we drifted up the main street to find the North End Café and there it was at the north end of Bedale. The return journey to Harrogate involved going to Masham by way Burrill and Thornton Watlass. Given the warm sunny day we could not resist stopping at Spa Gardens to sit out in the sun and some more refreshments. It was then back to Harrogate via the Deer Park and Ripley. PCJ 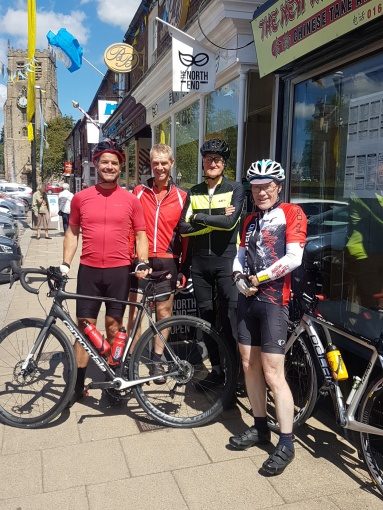 An excellent weather forecast, a little sun logo on every hour, and a good turnout at Low Bridge, and just to repeat that you do not have to be elderly or male to ride from Low Bridge, Richard`s wife Lesley was riding with us, also Terry Wadkin was a visiting guest rider on his electric steed.
Morning greetings were received from the Poddlers, Caroline, Sue D and others, and a bit later Max without his classic bike. Then on to Wetherby and Morrisons Café to take coffee in the “street” (see photo). Then away went the “A” team, the “B” team comprising Bill, Dave P and Terry headed for Wighill and Askham Richard for more tea and cake (yes a bit soon but good cafes are hard to pass).
After relaxing in the sun, we headed for Angram, unfortunately Terry had a non-drive problem with his electric bike, we had frequent stops and “fiddles“ with bits but to no avail.  Terry`s bike is heavy without its drive, but Bill (very kindly) offered to ride his bike for him, as both their bikes have rat traps on their pedals.
Another stop was taken in Tockwith (before the hills start) for another “fiddle”, but no joy, then Terry took off a personal training gizmo he was wearing on his right wrist and stuck it in his rear pocket. To our utter amazement the electric drive started ?????, has anybody out there come across anything like this before? Or was this just a coincidence?
Then it was a close peloton in good order back to Knaresborough and Harrogate. An excellent ride. Dave P

EG’s ‘A Team’ ride report
After our coffee stop sitting outside Morrison’s at Wetherby, 8 EG’s set off for York, via Taddy,Copmanthorpe and Bishopthorpe to Cycle Heaven for lunch. EG discussions over lunch usually demonstrate our ability to solve the world’s problems far quicker and faster than our current world leader’s, but the discussions on our table were somewhat unusual. We pooled our knowledge on wills, probate, executorship, tax rebates following death, and one cyclist (not a Wheel Easy member) whose concertina band was recently asked to provide the music at a funeral and who are now considering releasing an album “Greatest Funeral Hits on the Concertina”!!! We then set off on the homeward leg, checking out the newly rebuilt cycle bridge over the Ouse. There is
now a ramp you can cycle up (no more carrying bikes), although to keep the gradient easy, the ramp actually detours to the end of the station platforms (I kid you not!). The ramp at the other end of the bridge is not so far advanced, and it seemed to take us almost to Scarborough – but this will be shortened when its construction is completed.
Six of us (Richard, Lesley, Marvin, Chris, Nick and I) stopped for tea at the Linton Lock cafe (a first visit for most), whilst Dave S and Allen pressed on for home. As we crossed the A168 after Marton cum Grafton, we had one of the most bizarre incidents I’ve experienced when cycling. As we went into the middle lane to turn right over motorway, Chris stopped alongside a crow, which was standing still, presumably having been hit a glancing blow by a car. Other than a spot of blood at the side of its beak, it looked OK, but its wide eyes were looking up at Chris saying ‘please help me, don’t leave me in the middle of the road!’ So I held Chris’ bike whilst he gently picked up the crow and placed it on the verge – all this whilst cars were speeding either side of us at 60 mph. We all thought Chris should be recommended for an RSPB award, but he said he didn’t want to crow about it! His jokes don’t improve with age. This Harlow Hillbilly arrived home at 5pm, having completed 64 miles. A very special chapeau to Nick, who completed his longest ride for over 12 months. Brilliant! Eric
PS. who will be leading the EG long ride on 5 June?

The lonesome twosome. Dave S and I headed home, sharing the work into the wind, via Whixley, Clockhill Field Lane, Walshford and back. About 57miles, steadier ride this week. Allen B. 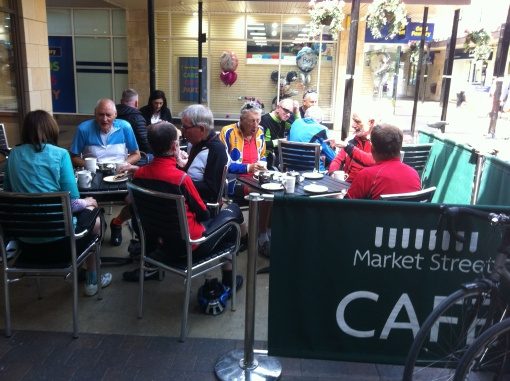 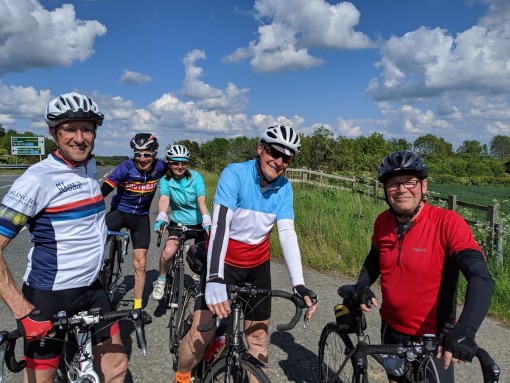