Despite the forecast there was no rain in the air, as Liz P and Paul (Postman) who were the only Short Route riders today joined to make up 10 for the Medium Ride and we headed though the Showground for Low Bridge, shedding Paul at Sainsburys who was not feeling too well. Hope you are feeling better soon, Paul. The route was to Boroughbridge via Bishop Monkton where we lost our second Paul (Tindall) and discussed coffee arrangements. Dennis left us at the outskirts of Boroughbridge and three dived into The Courtyard cafe and the remainder secured outside seats at Plenty, only to catch the only shower of the day. Three then pressed on leaving the remaining four to return via Great Ouseburn, where clothes were shed and Arkendale in increasing sunshine. A much better day than forecast and a good 35 miles in the usual good company, thanks to all who came.  James 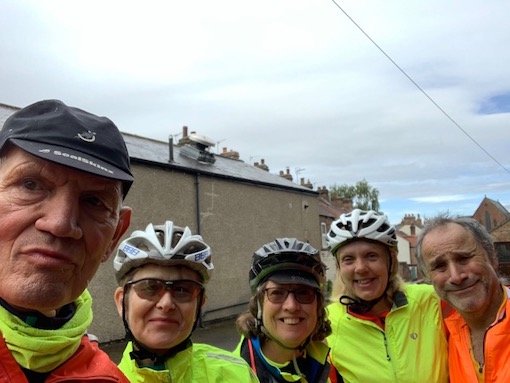 We started the ride to Greygarth monument with 7 riders, Tim R (T1) defected at the top of Scarah Bank to Group1 but we did gain another rider- Phil Stell. One fairly new rider to HWE- Mike, was concerned about the word ‘brisk’- absolutely nothing to worry about there Mike. We made good progress up the hills only to find one of Group 1 (Mark) with a mechanical, coming out of Grantley. Phil decided he would continue on alone and as Mark had an escort back home we forged ahead- onwards and upwards! We did experience a bit of warm drizzle but the weather got warmer as the ride progressed. There were no takers for the muddy walk to the monument so we flew down towards Laverton and took a pre- agreed detour through Galphay and popped out at Tate’s. Peter L had already left us to get a few more miles in. Lemon and Blueberry scones were the order of the day- delicious. The remaining 5 riders- Julie, Janet, Navah, Mike and Glyn joined with the 3 survivors of Group 1 for the return journey to Harrogate. Lovely ride- thank you all for 43 excellent miles. JanetG

I was just back from six days’ walking in the Lakes and felt the need to take the weight off me feet.  So, what could be better than a nice sit down on a comfy saddle with a pedal out to Greygarth Monument?  There were only three takers for the touring pace ride and Alison and I set off under the eagle eye of Ride Captain Frederiksen.
We had taken an optimistic view of the weather forecast and encountered only small amounts of drizzle from Ripley and up to the Drovers’ Crossroads.  We resisted the temptation of an early stop at G & T’s and motored on, briefly in the company of a young couple.  They had left Holmfirth at 07.00 a.m. and were on a 120 mile circuit, involving Masham.  After admiring our bikes, they sped off.  Bet they weren’t quite so blooming’ cheerful at mile 119!
Shortly before Greygarth we called in at the Delta Academy Trust Outdoor and Environment Centre as Alison thought it looked tempting for a Wheel Easy activity weekend! Sadly, it is strictly for school children.  It is due to open tomorrow and the Centre Manager was busy building bunk beds but he took the time to show us around and it really is magnificent, in a beautiful setting.  Pity it isn’t for the likes of us!
The thin blue line that was emerging in the west had become a huge blue hole, dispensing warm sunshine and light winds so we stopped to remove jackets and munch a quick sandwich before commencing what Colin originally described as the “fairground of a descent” to Laverton.
Our next goal was Aldfield where Alison assured us there was a flower festival in the little church of St Lawrence the Martyr.  Even though we were far too early we were let in for a look round and soon flagons of tea appeared, closely followed by trays of home made cakes so we settled in for the afternoon.  At this point a rather charming man called Neil Spedding appeared, carrying some sheet music to start the organ recital.  We engaged him in conversation for a while, only to discover that he was a retired Vet and had in fact been at university with our very own Mike “The Vet” Clark.  Quelle coincidence!  Anyway, Mike, all your secrets from your wild, misspent youth are, for the moment, quite safe with Alison, Liz and Me.
With the sun still shining we had to drag ourselves away for the last leg to Ripley and return along the Greenway.  That was a truly magical day, relaxed and fun.  Thanks to our Ride Captain and Alison for keeping me on the right route, despite the best efforts of my confused Garmin.  It did however manage to record 42 miles. Helen T. 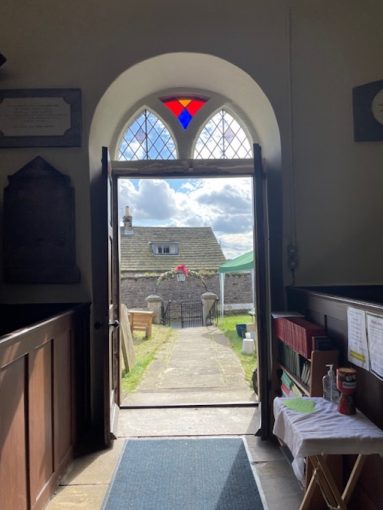 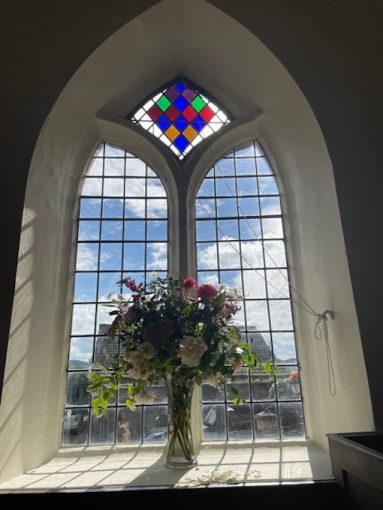 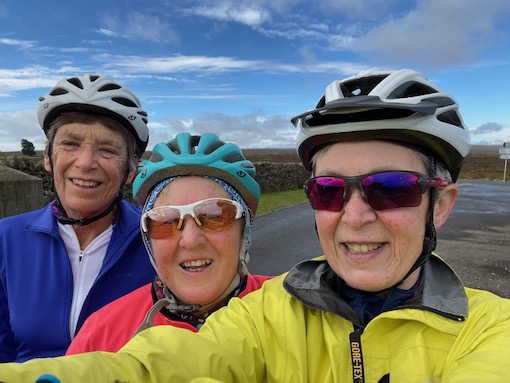