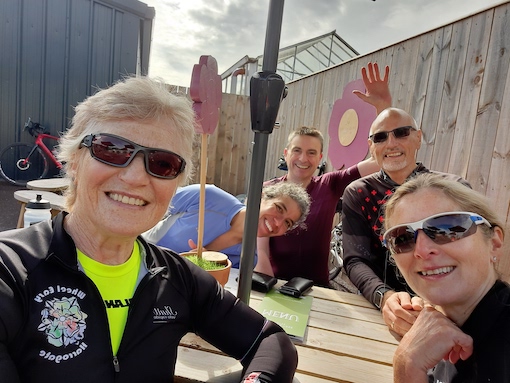 Today we welcomed two guests, Doug and Helen, who joined us for a trip to Pool. Eight of us eventually set off and having battled the breeze to Little Almscliffe where Paul B, Dennis and Paul (the postman) peeled off towards Menwith Hill and Kevin, Charlie, Helen, Doug and myself headed along Jack Hill Lane, turning left uphill again at the end and following the lane through to the main road down to Leathley. Whilst the views were as stunning as usual, we encountered more vehicles on the narrow lanes in one morning than we have ever seen in all the years we have cycled them! Despite that we enjoyed a great run down to Leathley and through to the Farm Shop at Pool for caffeine and cake. The return was uneventful, apart from more climbing passed Almscliffe to Brackenthwaite Lane and then the swoop down to Burn Bridge as enjoyable for tired legs as ever. 30 quite hilly but very worthwhile miles in comfortable temperatures and good company. Thanks to all who came.  James G 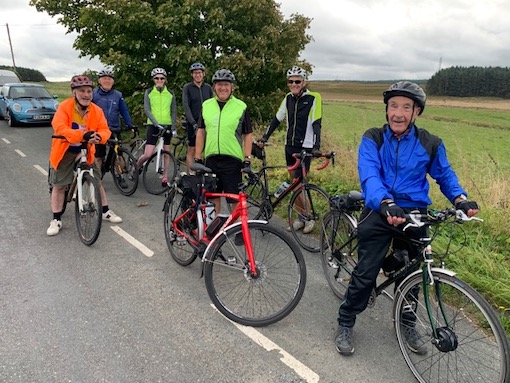 I knew as I left home it was going to be windy in places on todays ride, however twelve happy wanderers set off from the showground in benign conditions. It was steady away down the Greenway until I hit and killed squirrel which darted out. Bev also nearly hit a dog which did similar. Mike on the recumbent did some nifty steering through the various bollards. At Ripley carpark Liz managed to pick up a solo cyclist who said he was going to Masham but in the end stayed with us for the full ride. As we trundled up Scarah bank the wind started to become more noticeable. On and upwards on Careless House lane until the Brimham rocks road was reached. It was definitely windy here. Phil and Bev decided to leave the group at this point. Going down the hill to Fellbeck was into a full headwind and required peddling all the way. Turning right onto the moors and into a cross wind, not my favourite conditions. However once we started the fabulous descent into Laverton we were then out of the wind. Onto Ripon and the Spa Gardens cafe, however it was closed .. what no coffee! After going through various options we decided on Olivers, however on the way we came across the Hive cafe opposite Booths. By putting together a few outside tables we all managed to sit as a group in the sun. After suitable refreshments and banter where we realised that 40% of the now reduced group were called Mike/Michael! it was home via Littlethorpe, Bishop Monkton, Occaney and Knaresborough. A much reduced group parted company at the top of Knaresborough Hill. Somewhere in Knaresborough we had we lost (recumbent) Mike and Nicky. We presumed they had gone with Colin. Mike (Clarke) stayed with me to the bitter end as we both had parked at the Showground. A good days ride with varied scenery and conditions. 40 miles. Michael Smith 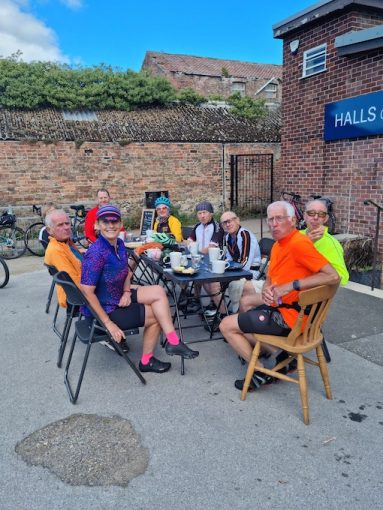 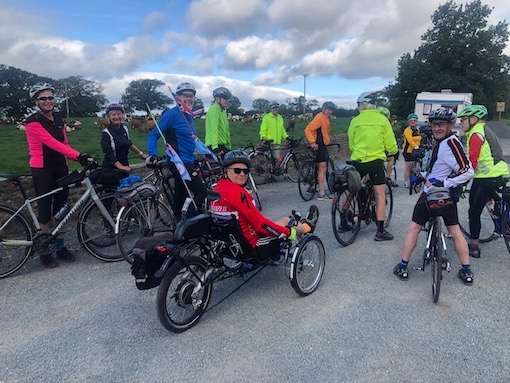 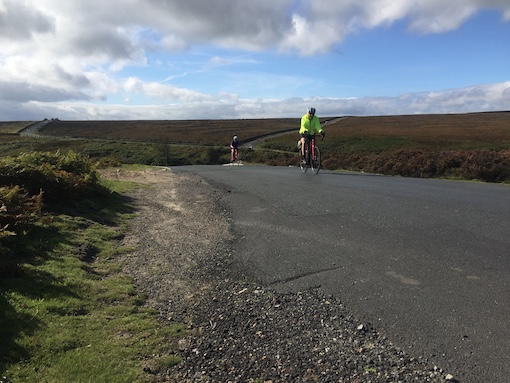 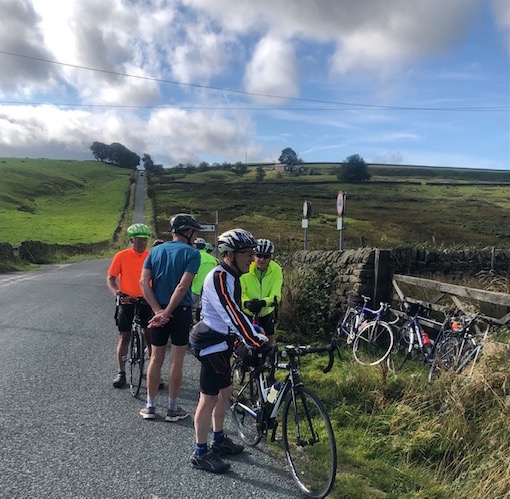