First of all an apology for lack of photo.(Forgot).Eight  enthusiastic riders resulting in two groups of four. Mike P, Mike W(good to see you back), Karen and Barbara in group one and Nick, Steve, Dave and myself in group two. Group one departed and we followed ten minutes later. A good brisk ride to Low Bridge and Farnham catching group one as we entered Roecliffe. As we progressed up towards Dishforth Steve and Dave got carried away and missed the Marton-Le-Moor turn. Nick chased them down while I had a rest and for group one to come sailing past me while I waited. Once regrouped we pushed on to Ripon to Olivers for refreshments where group one had just taken their seats. Group one departed while our group settled up. Caught sight of them in Bishop Monkton where they had obviously decided to head for Knaresborough whereas we stuck to the days route to Markington and then Ripley and the Greenway. We all went our separate ways at Bilton Lane. Great ride and weather, cool but acceptable. My thanks to Nick Steve and Dave for your company and waiting for me a couple of times. 42 miles for me.  Colin B

Route 108 was to take us to Wetherby, Cattal and Boroughbridge, except that Wetherby was to be by-passed given the Leeds Covid restrictions. A cool but dry morning saw 13 medium plus riders gather at Hornbeam and split into three groups, ours consisting of Vince, Chris, Tim(4) and me. Welcome to our new Tim, on his second WE ride. It was a brisk and uneventful ride, except for a minor mechanical. Coffee at Tancred Farm was good as always. Around 45 miles at an average of 14.7mph. Apologies – no photos. MikeW

Three set off from Hornbeam Park, Helen, Katharine and Zoë following route 180 to Tancred Farm for coffee. The first part of the ride was very smooth cycling through Spofforth, North Deighton onto Rudgate , through Whixley and finally to Tancred Farm shop for Coffee and Toasted Teacakes. Whilst we were enjoying our coffee , the cows were enjoying trying to eat our bikes….Cows despatched and off we went on our way home via Boroughbridge. Firstly there was lots of liquid manure on the road to avoid and then a bee sting! Onwards to Roecliffe and Bishop Monkton. A decision was made at Bishop Monkton to carry on home via Markington avoiding Knaresborough Hill. Unfortunately the Greenway was very busy but a lovely ride. Thanks to all. 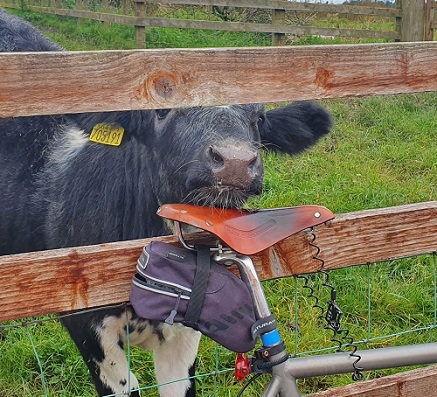 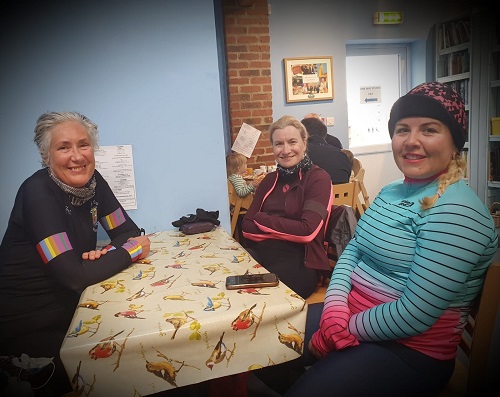