On a perfect Autumnal day, eight cyclists met at Hornbeam and split in to two groups of four. Just as the second group were setting off (two Tims, Mike and Colette) Karen joined – making 5. We made our way to Birstwith via the Greenway. Then, not deterred by major roadworks at Darley, we dismounted and carefully weaved our way past huge gaping holes in the road.
Soon after that the climbing started with Sheepcote Lane. One of the Tims reassured us that we had completed the toughest hill but he had forgotten about My Love Lane which felt steeper and longer. With the hills done, we were all looking forward to coffee when Colette’s fixed mudguard became unfixed and started flapping dangerously close to spokes.
With a bit of team work, a surgical mask was used to make a temporary repair (with everyone making a mental note to carry a couple of cable ties in future). Arriving at Sophie’s we were reunited with the first group and sat in the new Marquee (which felt like a good compromise between sitting inside or outside). It was lovely to bump into Gia, James, Kevin and Paul as we were leaving. Another lovely Wheel Easy ride.  Colette 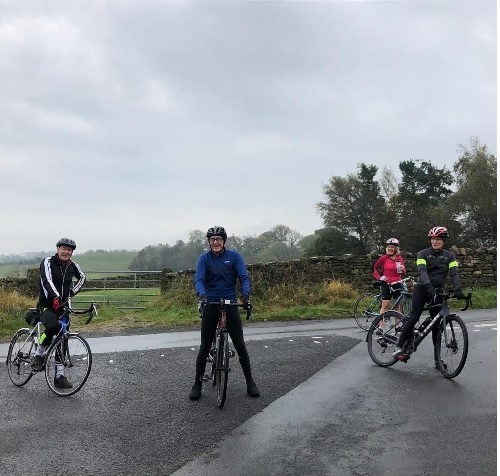 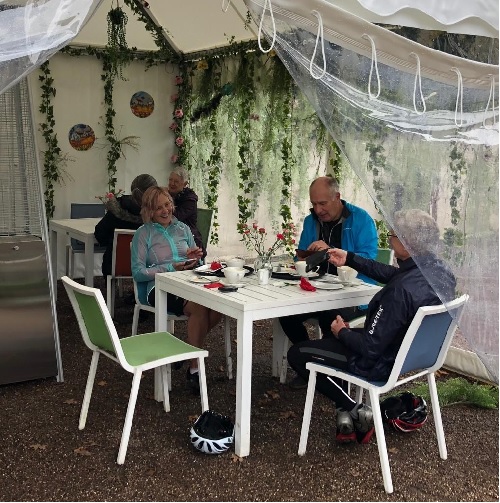