Nine cyclists headed out from the showgrounds for the 15-mile Short Gentle ride on 17 April. At Knaresborough Low Bridge, Corinne switched to a small group doing the Medium Steady ride, which had been her original preference, and we were down to eight.

The day turned absolutely glorious on the way to Spofforth. The sun was out making the fields of rape glow, and we had a brief stop at Little Ribston for some layer removal and an impromptu partial striptease by one member of the party (who shall remain nameless). Sue and Margaret continued back to Harrogate when the rest of us stopped at The Castle Inn in Spofforth for coffee (Fodders was closed).

The back patio was really lovely, and the coffee came with shot glasses of Smarties, but we had a 30-minute wait for scones and a 45-minute wait for a croissant (they were baked upon ordering, and quite delicious when they finaly arrived). Tip for next time: ask when ordering if any are already baked. The pleasantness continued for the rest of the ride.

Dave peeled off at the top of Colin’s Hill, Bob at Railway Road (right after we heard about Justine confusing the Red Hot Chili Pipers for the Red Hot Chili Peppers (she has tickets she’s desperate to get rid of, if anyone is interested), and the last four, Fiona, Paul, Justine, and Navah made it all the way back to the starting point. Navah L. 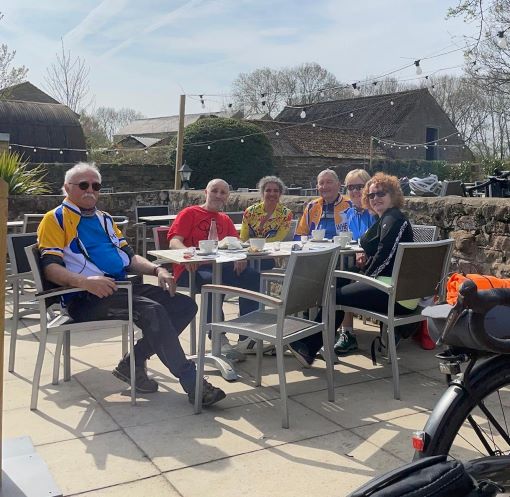 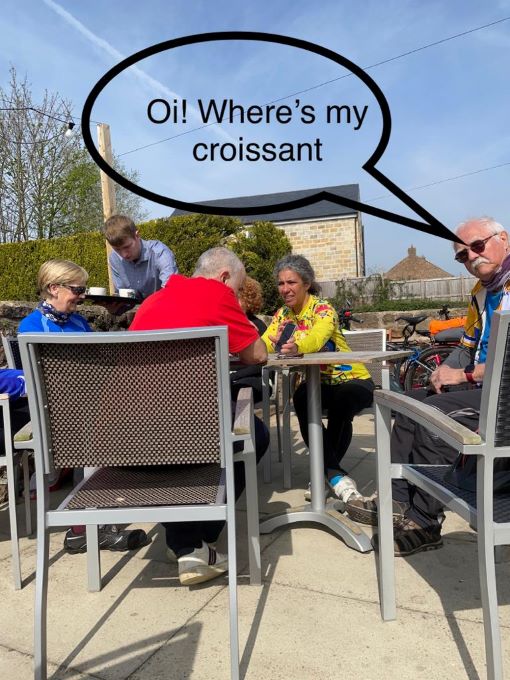 Regretfully there were only three takers for this ride Bernice, Steve and Allan as leader. We took the route as given and were surprised when the Medium Brisk passed us between Farnham and Ferrensby.

Through out the ride there was a cooling headwind ( read cold) both going out and on return leg. Thank goodness it had warmed up a bit. We were unable to find a Coffee stop and the Anchor Inn pub in Whixley was closed so continued on to Walshford and headed down the old A168 and headed to Kirk Deighton for Coffee at the Bay Horse Inn. Excellent coffee.

We return to The Showground by the given route. 32 miles about three hours riding.
Sorry no Pic. As not used to my new phone as yet. My last ride with the group until July. South of France here I come. Allan C

Some confusion at the showground this morning about Medium rides and the brisk ride only really formed up at Low Bridge. We followed the published route and made good progress passing through Farnham, Ferrensby, Arkendale, Great Ouseburn and arrived at Tancred Farm Shop near Whixley before 11am.

Suitably fortified, we varied the route slightly and instead of going through Cattal, we went along the increasingly potholed Scate Moor Lane to Walshford and Little Ribston. All returned directly to Knaresborough where we split up and went our own ways. A lovely ride, good company and a pleasant spring day. Al D.

The weather forecast was very promising for an Easter Sunday ride to Bolton Abbey and sure enough there were quite a few braving shorts as we gathered at the Showground. Our group comprising Liz F, Helen, Gia, James, Paul, Peter J and myself followed the usual route to Little Almscliffe, where we met a very friendly cyclist called Jonny from the Boston Spa club. After a pleasant chat to do with all things cycling, he kindly offered to take a photo of us all.

Then we were quickly on our way towards Menwith, cycling steadily up the never-ending Duck Street (where we said goodbye to Paul) until we arrived at our first coffee stop at Stumps Cross. Tasty refreshments were enjoyed on the benches outside sharing with some bikers Liz had made friends with.

Then it was on to Bolton Abbey via the picturesque main road from Barden. After that the very pleasant lane to Beamish and on to Ilkley where we decided on a second stop at Café Stazzione, and very pleasant it was too sitting outside in the sunshine. A consensus was taken to go home via Asquith hill and Pennypot Lane. It was a great Spring ride with grand scenery, lovely company and a lot of climbing! 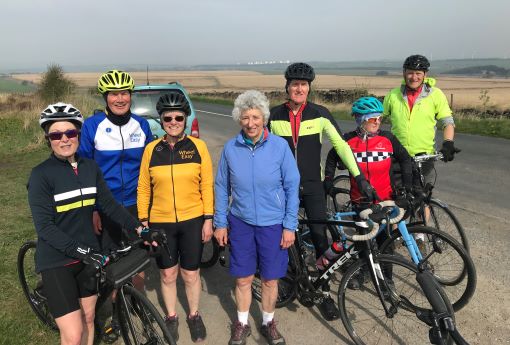 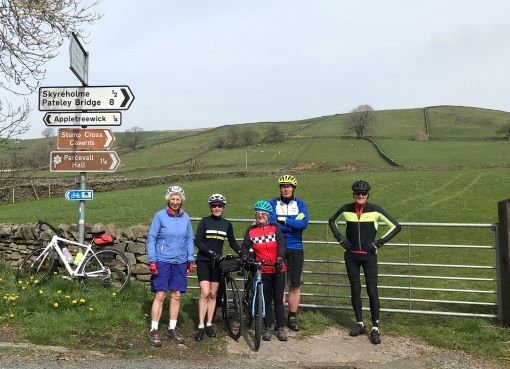