After lots of deliberation on whether or not texting Poddlers’ wanted to re-enact Dorothy and the Wizard of Oz…it was decided, weedily, we would walk and coffee…

As we reached Ripley the wind increased drastically and the Wanderers…obviously on the Yellow Brick route passed by with looks of total concentration on their pedals.

In the absence of the regular group of Poddlers I volunteered (Press ganged) to lead a short ride.Only four of us, Rachel, Colin, new member Edna & Me.We trailed the Wanderers as far as Ripley then decided, in view of the high wind, we would give Scarrah Bank a miss. After discussing several options we decided, on the old favourite Scotton, Lingerfield and Knaresborough.Finishing off along the Beryl Burton after a very windy but dry 18 miles D.B.

A very windy day and after catching a few strong gusts on Pannal Ash Road on the way to Hornbeam, the original plan was disposed of. 13 Wanderers in total and Marc took charge of the Faster group which totalled 4, (thank you Marc) leaving me with 9.  It was great to have
Sur John back with us but he had to leave us at the viaduct due to other commitments. It was gusty on the Greenway and more so as we went up Scarah Bank, past the Drovers, turning left past Rabbit Hill Farm and round to Brimham Rocks, though in theory the wind should have been pushing us up the hill. There was a photo stop at the top and we did enjoy wonderful views. However, we were now into the wind and the side gusts were strong at times so while enjoying the views I for one was glad to stop at the cafe just past the Stripe Lane junction. This is where there are lots of llamas and other animals and is a children’s soft play area. We all had to sign in and out but I didn’t see any Wanderers sneaking off to the soft play! There no scones or toasted teacakes on offer but we all managed to get fed and were able to meet up with Marc’s group there. They decided to go straight down to Burnt Yates while my group went down Stripe Lane, over the toll bridge to Birstwith, Clint and Hollybank Lane. Marc’s group were waiting at Ripley so we were all able to go down the Greenway together before going our separate ways. We all got back to the Harrogate area safely and I hope everyone reached home safely too. I had a very enjoyable if somewhat scary ride but it was great to be out. About 28 miles. Thanks to Marc and co. for leading themselves, to Chris for backmarking and everyone for a great morning out. Chris was quite bemused this morning when some of the group were using the cycle crossing from the Stray to Granby. A motorist shouted at him that he should get off and walk!?  Liz P 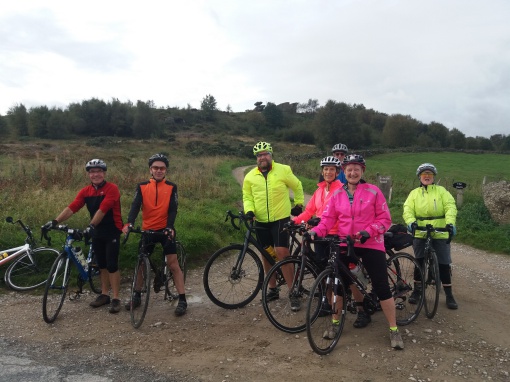 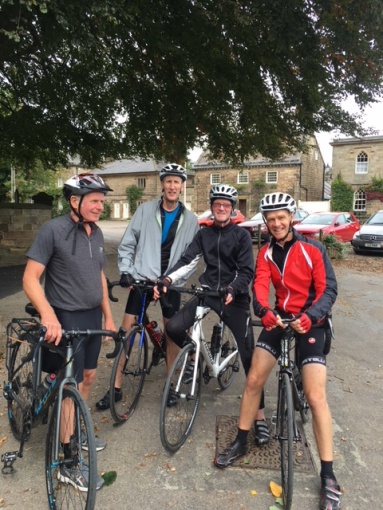 With the threat of high winds and lashing rain it was a select group of 7 that embarked from Hornbeam and headed out through Pannal and after a brief detour in Kirkby Overblow (apologies for leading from the back) we made our way down to Harewood Bridge and then approached the biggest climb of the day with trepidation. Obviously, we underestimated ourselves as well all made it up in fine style. The threatened weather had dissolved into a bit of a breeze which we felt at the foothills of the climb but by then the sun was out and we were all divesting layers. The hard work of the climb paid dividends as we made our way past the reservoir at Eccup (pausing for a photo) and the well-hidden path to Wetherby behind the Grammar School. It was a glorious run and we covered ground with pace – but always with safety in mind. At East Keswick we paused to regroup and democracy broke out so we headed through Linton to make our coffee stop at the excellent North Street Deli. Still with the sun beating down we made our way back through Harland with only a brief pause for a ‘mudguard reset’ and then Spofforth/Follifoot/Showground where we gradually dissipated. Thanks to all for excellent company and safe riding. Dave M. 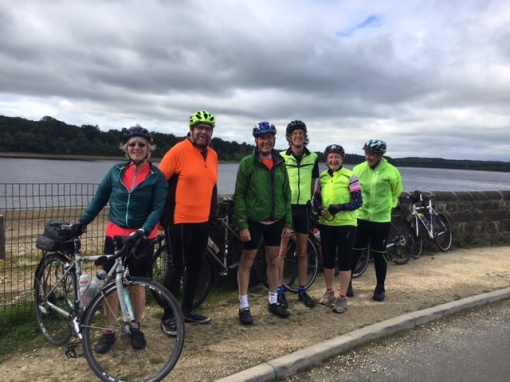 With the Met office forecasting gusts up to 50mph I was in two minds about cycling but decided to head to Hornbeam and give it a try. A small select group of Wednesday riders consisting of James, Kevin and Jill conferred over the route. On the basis that deferred pain was better than immediate pain we set off with the wind behind us.

Negotiating a closed road with the approval of the repair team we zipped out to Boroughbridge congratulating ourselves on our fitness. Turning towards Ripon we were grateful for the hedgerows protecting us from the side winds with the occasional battering as we passed gates. Refuelling at Oliver’s Pantry prepared us for the battle home against the wind. Despite Kevin s objections James attempted some artistic reflected photos and then we were off.

The journey back to Harrogate was easier than expected though the downpour in the last couple of miles might have held off for an extra 20 minutes. So, considering the weather, a well-chosen route and a very good ride of about 36 miles. Charlie. 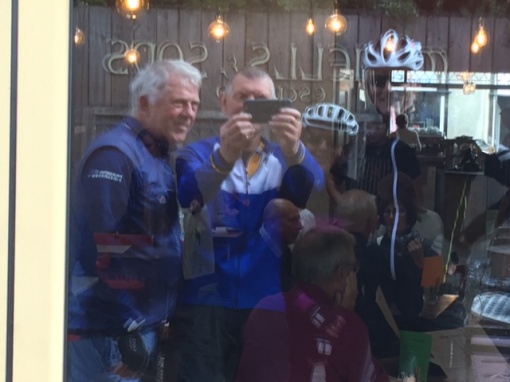 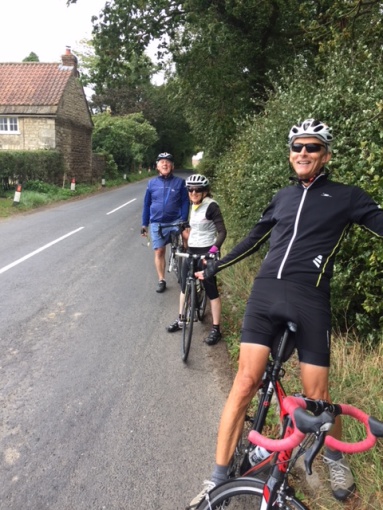 Today’s Long Ride was by most standards one of our shortest – just 40 miles or so but our legs told us it felt more like 70.  Rejecting both the “pain before gain” and the “gain before pain” strategies our trio headed off eastwards towards Tadcaster to see how we felt.  “Jiggered” is how we felt on arriving at the Lemon Tree for restorative tea and day-bakes, having slogged southwards through Wetherby to Bramham before a 90-degree turn towards Tadcaster allowed us to arrive at the cafe still able to speak, at least.  En route Martin had entertained us with another tale of the sea, this time the delivery of a brand new ocean-going yacht from the Baltic to the Solent on which voyage he had served under a highly mercurial skipper.  One scone today still wasn’t enough to solve the remaining Brexit issues, nor to estimate reliably how long the PM can expect to stay in post.  That requires a few more cafe stops, I think!  Refreshed and entertained there was no enthusiasm for extending the ride any further eastwards: for home we turned via Wighill, Rudgate, Cowthorpe and Knaresborough where we split up hoping to beat the rain which we had felt in the wind on the way back.  Luckily, I could watch the rain from the shelter of Morrison’s at Starbeck; I hope Peter J and Martin were equally lucky.  Barely 40 miles, but what a work-out! Terry S

We had a “smallish” group today at Low Bridge, with riders reporting some effects of wind ?, as forecast.

Last week it had south, so consulting with our sailors, it was decided to head for Spa Cafe in Ripon with the wind more or less on our backs, the strength of which would come as a surprise, who believes a forecast but they are getting more accurate but 50 mph well!

The run to Ripon must have been one of our fastest, the downhill to Occaney was taken by Dave (wonder wheels) Siswick, down the hill up the other side, would he freewheel all the way to Ripon?

We are all experienced cyclists and we knew this free ride would have to be paid for on our return.

Dave Watson who had joined on Waterside had to leave to return home after Bishop Monkton.

Once again it was good chat and calories, Dan only have a minor snack today (see photo).

The “A” team thought about?, decided ? its route back, the “B” team comprising Bill, Dave P and Norman thought about the wind and choose a route (they hoped) would reduce the wind effect.

So back into the wind to Bishop Monkton, then turn right hoping for some shelter from trees and hedges with the wind on our left sides. It did but gaps in hedges and it hit us.

Down to Ripley it was full on “in yer face” so care was taken on the descent, just as thought, we had protection on the Greenway, however the sky clouded and down/ sorry along came the rain, horizontally.

a quick sprint across the rail bridge to shelter at the other side, it would have been better to cross the bridge on all fours below the level of the parapet.

After Norman left us the sun came out and dried us off.

The ride had been a challenge for us three, but we are experienced cyclists, and we have been there before, when younger, but we rose to the challenge, leaving us quite “chuffed”. 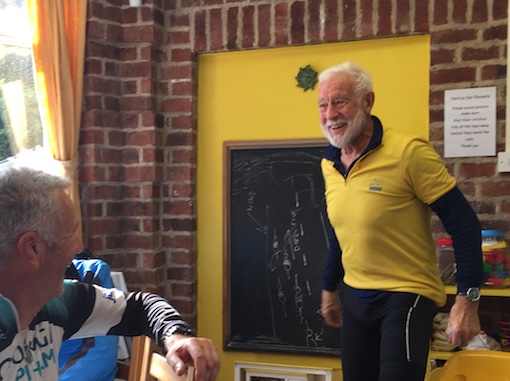 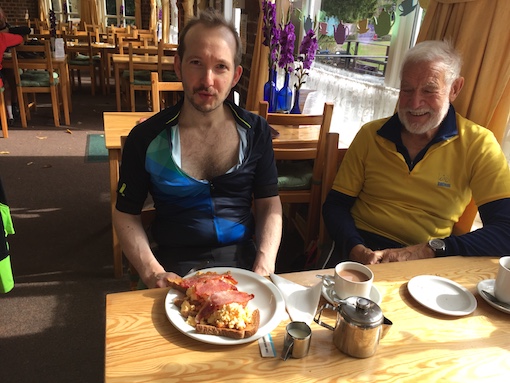