It was only 2C when I left home and with the forecast of rain all day (supposedly getting worse at lunch time), it was no surprise that only 5 turned up at Hornbeam. Vince, Tim, Chris, James and I. James agreed to come with us but on the proviso that he didn’t want to slow the group down on what was a particularly cold day and that he would probably peel off on the other side of Knaresborough. This in fact was the case leaving 4 of us to continue via The Dunsforths, Boroughbridge, Skelton to Ripon. A quick refreshment stop was taken outside Cafe Nero – coffee with mince pies or Belgium chocolate muffins before embarking on the return route through Littlethorpe, Copgrove and Knaresborough. For the record we did 39 miles with 1,848 ft ascent at an average of 13.7 mph. I’m glad I plucked up the courage to get out on this grim winter day…at least I don’t feel guilty as I have now become a couch potato watching Live Renault Super Sunday football on tellie! Tim R. 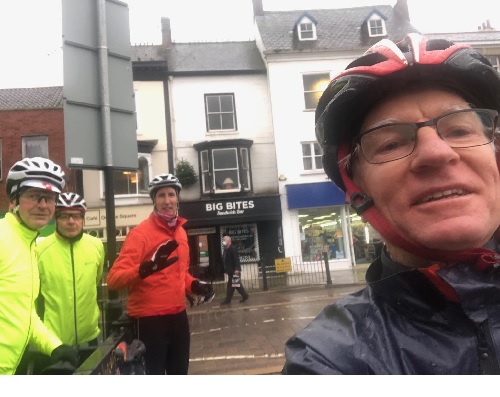