More than thirty at the Showground ready for a hot day’s ride. The show of hands favours continuing meeting at the Showground but we will continue to monitor opinion.
Yvonne,Tim, Mark, Michelle, and Tony led off with electric James, Kevin and Gia wandering along behind. Lovely ride through Hollybank Woods, Cut Throat Lane (sorry Kevin, really did cut you off the picture!) and on to Fountains and the Deer park to meet up at the cafe at Tates Garden centre. Helen and Janet had followed the same route and were happily enjoying the sunshine and chat. Home via Skelton in the increasing heat, met up with the fast boys who had sped to Thirsk, had lunch and overtook us in Minskip! Excellent ride on one of the hottest days of the year.40 miles. Gia 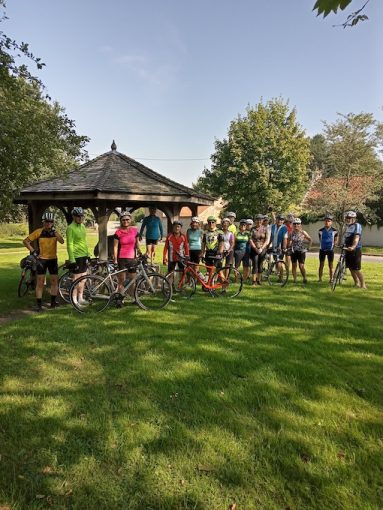 With the prospect of good weather the Wanderers turned out in force this morning. Eighteen of us departed the showground in three groups. It was a bit messy but settled down when we reached Low Bridge. Mike P joined the peleton and we headed for Farnham. Karen had a chain malfunction as we climbed out of the village and had to check the tarmac was sound. Thankfully no worse for wear and we were able to push on through Arkendale to the A168 where Brians group had been told of hedgecutting going to Marton cum Grafton and was going to deviate. Thankfully they changed their minds and stuck to the specified route. No sign of said cutting. Dennis left us at Marton as we carried on to Great Ouseburn for our photo shoot. I waylaid a passing lady whole obliged with the photo. Joe and Geraldine departed heading for the Dunsforths and Boroughbridge. On to Aldwark and a cheery wave and hello from the toll bridge keeper. Brian took himself and three others ‘off piste’ at Flawith taking the bridlepath to Myton where we met them on the bridge. Lovely spot discussing the battle and observing the many fish in the Swale. We perhaps spent a little too long there as by the time we’d ridden through Helperby and got to Boroughbridge we were ready for coffee and time had moved on. With such a large group we split in three groups and each found their own watering hole. Again perhaps too much time taken and some riders departed and made their own way home. This left a group of nine for the final leg. So Minskip, Staveley and Knaresborough where I departed. Fantastic weather and a great ride. My thanks to all and particularly Brian and Mike W for ‘supervising’ their groups. 42 miles for me. Colin B 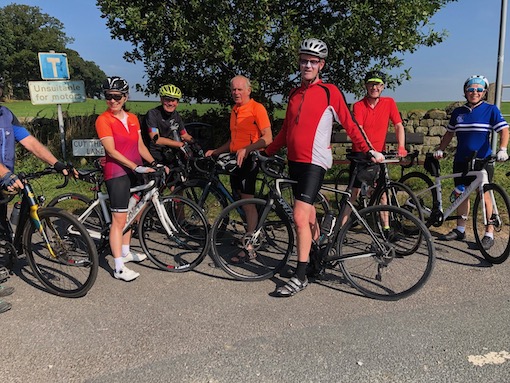 Not many for the ride to Thirsk (Route 265) today – perhaps it was the knowledge that the temperature would continue to rise as the day went on & the open roads would mean one hot day in the saddle. A standard ride out to Sessay and past the splendid church. The temperature had risen remarkably & so did the pace …. and then escalated some more all the way through to Sowerby. A number of Thirsk cafés were closed for some reason leaving a limited choice and those that were open were rammed with everyone enjoying the balmy weather. Richard & Tall Tim decided to queue at Plenty & then sat in the shade of the war memorial whilst Peter, John & Andy crossed the road to Greggs & even more shade. Luckily the route home was at a slightly more sedate pace although the temperature by now was bonkers. Loads of cyclists out today including Gia, Kevin & James who we joined whilst hiding at the side of the road as a gigantic combined harvester shuffled past. 54.8 miles at 15.4 average. Tall Tim. 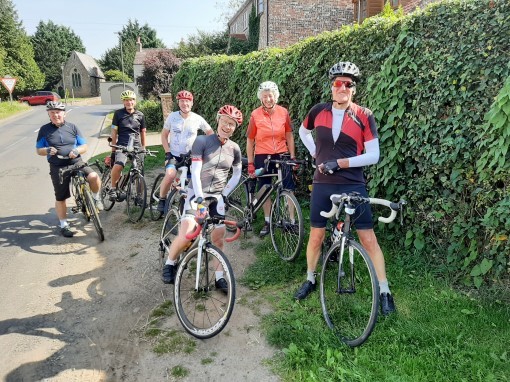