On a wet/cool and a little blustery Wednesday five hardy soles turned up to ‘do’ their respective rides. Due to the numbers we merged and took a slightly shorter route than Mike had selected for the day. The ride across from Burn Bridge to Sicklinghall wasn’t too bad although the roads were wet. By the time we got to Thorp Arch the rain was steady.

The Medium Plus ride comprising of four riders had called in ‘on route’ to Tadcaster were there ahead of us. As they departed the heavens opened. We put off our own departure a couple of times before deciding we’d better go for it. It rained. Boy did it rain. Big puddles as we headed back to Wetherby and the cycle path up the A168 before turning for Little Ribston.

James swung off early for home and Peter headed for Whixley. I left Mike and Monica near North Deighton for Knaresborough. Still raining. Grateful to get home. The waterproofs generally held up ok. Despite the weather it was a good ride and good company. Thanks all. 30 miles for me. Colin B 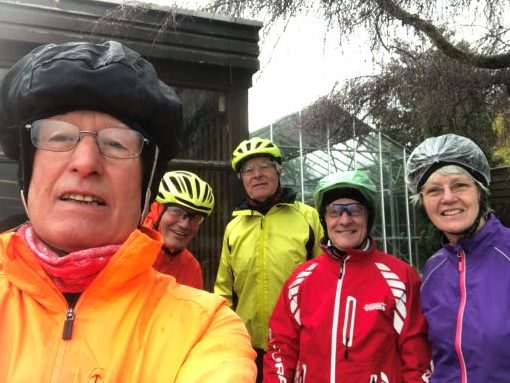 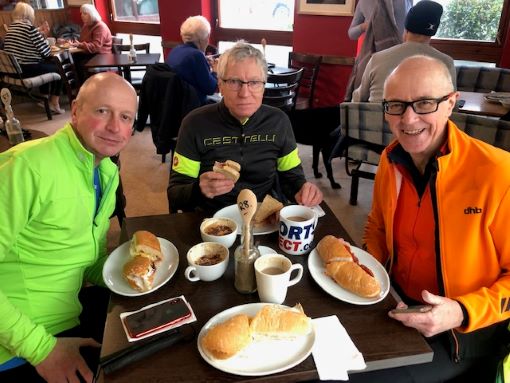 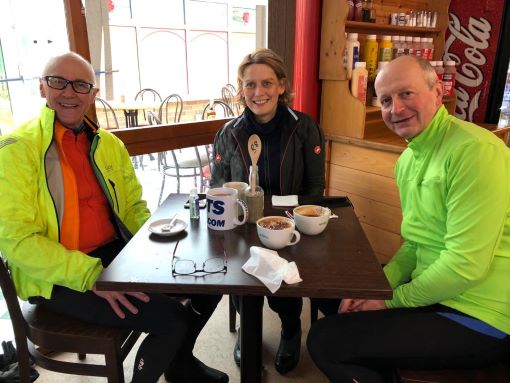 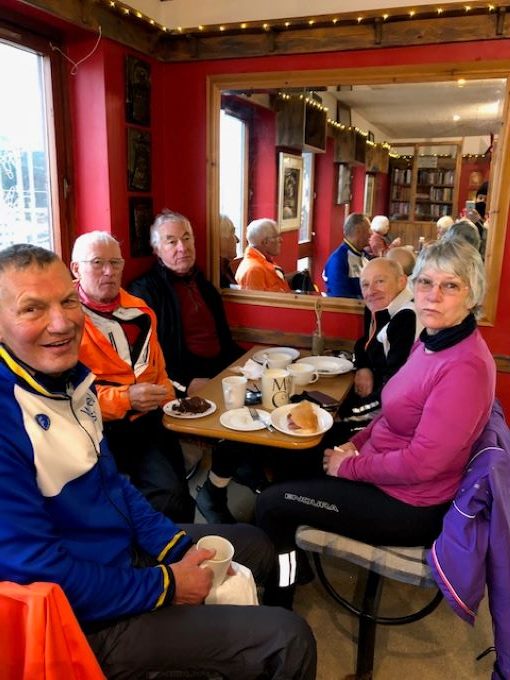 I met Geoff at Low Bridge just after 10 as he set off for what he thought was a solo ride. He was on a short ride due to being on Grandad’s taxi duties. He’d forgotten to put his ‘not for hire on Wednesdays due to a long term arrangement’ sign up!

We questioned the lack of EG’s as the slight rain stopped and we were feeling much warmer then the just over 0°C my Garmin showed (other cycle computers are available). Proving that the EG’s can be disorganised even when there are only two, taking my coat off resulted in a solo ride for a few miles but we met up before B’bridge. Geoff had decided to stop for coffee at Plenty so we said our farewells and see you next weeks. Geoff returned missing the worst of the weather according to Strava.

I headed south towards Marton-cum-Grafton with the wind less helpful. Due to a variety of reasons it has been a while since I have ridden on my own and felt up for the task. Seems I have mostly been feeling under par and hanging on! I let my mind wander after programming my legs into brisk pedalling mode, planning on using a highish cadence into the wind and out the saddle on the rises to generate some warmth. To the Dunsforths, the Ouseburns and Whixley before crossing the A59. The plan was working, even as the rain started and as I put my waterproof back on, taking the opportunity to take my the banana out, I was feeling positive. I do enjoy the feeling of rain and wind on my face and relished the challenge. I made an agreement with my legs it was Thorpe Arch for a coffee if needed, cycle way to Wetherby then home via Knaresborough. My legs made me promise that if they were feeling good at Wetherby I wouldn’t add a loop, I agreed.

The plan was going well at Tockwith Road cross roads as I circumnavigated a pond that had formed in the road, but as I set off up stream a lorry coming the other way went through the standing water in the middle of the road. Moses would have been proud of the job the driver did in parting the waters! Unfortunately most of it seemed to land on me dislodging my glasses and nearly knocking or more accurately washing me off my bike. The sensation of a very large quantity going down my neck was alarming and shocking. At least it took my mind off the water that had filled my shoes and gloves, I apologise to anyone who heard the bad language as I shouted at the driver.

I very soon realised that I need to shorten my ride, did a 180° turn and headed for home. The next ten miles or so were a battle with the elephants as I like to call the elements (well I was riding on my own and I have to keep myself amused) and the elephants were winning. I called on my inner Flandrian! The highlight of my return was bumping into Dave W, unfortunately only a brief encounter (not sure who was Alec and who was Laura) due to the rain and cold. When I got home my heart sank as there was no car outside so no one in and I was having serious doubts about my ability to gain entry due to cold hands and having to work really hard to do the simplest of tasks. (Flat 40 miles 13 mph). Chris B