There were five hardy takers for the Short Ride this morning, so seven with a leader and back marker. Our route was a loop out past Rudding Park and up through Pannal to Pot Bank and then Hampsthwaite. All went well despite the damp drizzle, and we resisted the call of Sophies and carried on to Ripley for coffee before heading back in on the Greenway. Thanks to Barbara, Margaret, Tim, Paul and David for the company and to Tall Tim for excellent back marking duties. 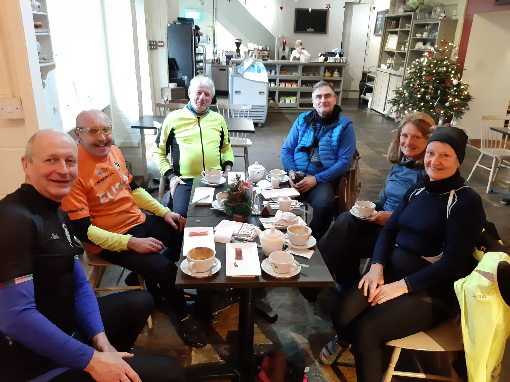 On a grey morning eight of us set off for Pateley via Stripe Lane and Smelthouses. By Ripley, we’d become ten.

As we climbed towards Brimham the drizzle became heavier and heavier. What should have been a beautiful ride along past Smelthouses, was misty and wet. But it was a day of contrasts! As we left Teacups it became brighter.

I was keen to try leaving Pateley by Wath Road. Fortunately, the rest of the group were agreeable. Going along Wath Road gave us beautiful views over Gouthwaite. Then we hit the super steep hill , so it was heads down. The advantage was that there was plenty of time to admire the views while ‘crawling’ up. From then on, the sky got brighter giving some beautiful landscapes. After Fellbeck Hill, it was a ‘cruise’ back to Harrogate. Thanks to all for your company.  Several people commented that this was billed as a hilly ride. It certainly was! Alison N 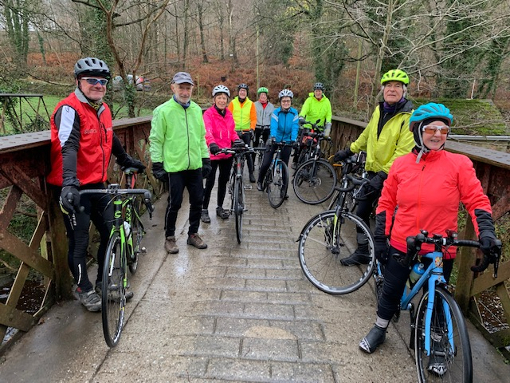 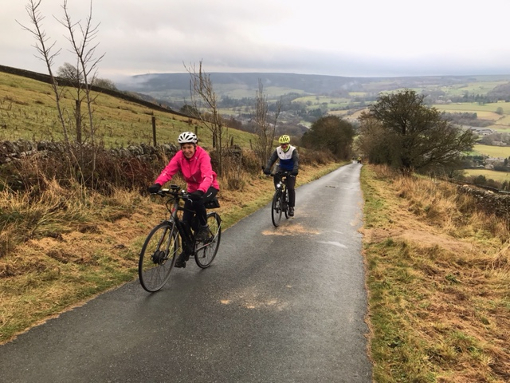 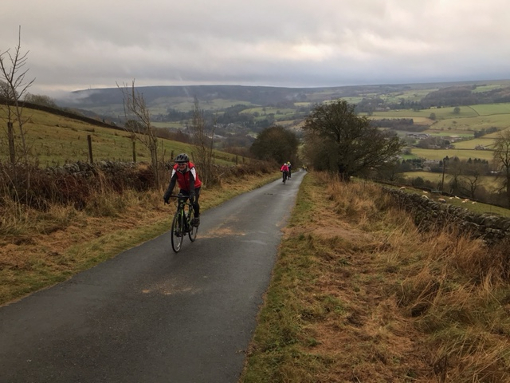 Mark, Dennis (the Younger), and Navah were once again the only three takers for a Medium Brisk ride this Sunday, and it was once again wet, but significantly warmer and less windy (and actually less wet) than last Sunday. The three got out of town with some assistance, and then headed off towards Boston Spa in drizzle, wondering what happened to the promising weather forecast. They tried to stop for coffee in Wetherby on the way back from Boston Spa, but the Christmas market had everything clogged up, so they kept going.

Navah missed the off-road cycle path leaving Wetherby (one of her several missed cues on the ride, which were corrected by her phone and fellow cyclists), took a U-turn and led everyone back to it, and then wished she hadn’t: the dirt-and-gravel 2 1/2 mile track was a total wallow from all the rain, and the bikes were a total mess by the end. Yuck. The wet, mud-splattered trio returned to the Harrogate showgrounds for scones all around at Fodder before returning to their homes to wash their bikes (and themselves). -Navah L 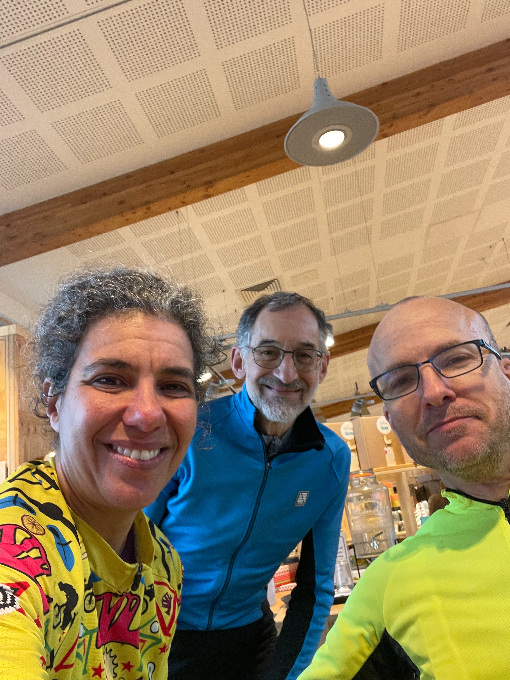 It was decided to ride to York as the forecast was to be mixed. Four riders Trevor G, Micheal I, Dave R and Grant D met at Hornbeam at 09.00. We would meet two Martin B, Johnathon W at Sandy bank at 09.30

A brisk pace was set out to Beningborough with one stop for mudguard issues. We went to Shipton then into Haxby and Wiggington into York.

We headed across the city on the inner ring road towards the Millennium bridge. Cafe stop was at Cycle Heaven where we managed to get a table for six. Fuelled up our route was through the racecourse towards Askam Brian then onto Angram and Long Marston where the rain started.

Tockwith cross roads was where we said bye to Martin as he went Whixley to Boroughbridge. Five went on to Cowthorpe where at the junction to Knaresborough we said bye to Jonathon. Four went back North Deighton to Follifoot where the rain was heavier. Then on the road to Rudding the rain stopped but there was a long queue of traffic. Trevor peeled off to go back via Pannal so three were left to go to show ground. The queue was caused by a wedding carriage being pulled by a pair of horses. We all got passed and tackled the last hill of the day in the show ground. Oatlands drive was where the last three parted. 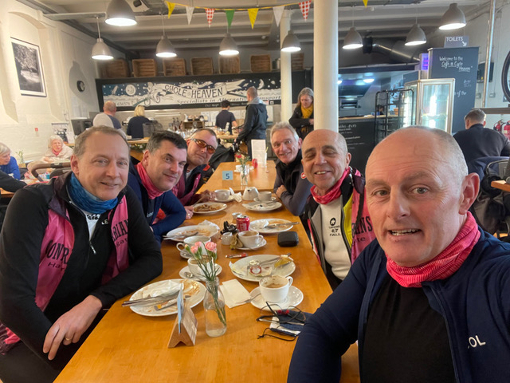