The day started as it meant to continue, wet could be described as an understatement, in fact was Noah back in business? if so, do not leave Harlow Hill it might be the only place above water.
Downstream towards Low Bridge, Hornbeam car park looked very quiet?
At Low Bridge we had five riders, could this be “The Ride of The DB`s” perhaps with background music from Wagner?
Chris joined us for a short while, just to show us that they be just as daft from the South of England.
Away went the four of us consisting of 75% Dave’s.  Dave P, Dave W and Dave S, Dave P2 and Dave W2 not being present (I hope this the correct way of identifying Dave’s?) and Peter B was stuck with us, poor lad.
It was wind and “Rain in the Face” him Chief of DB`s, all the way to Boroughbridge and Morrisons Café, bikes under cover and room to stretch ourselves out and hang out wet clothing without inconveniencing other customers.
After polite conversation, Dave W and Dave S headed out in to the wetlands of Yorkshire to get a few more miles in, and Dave P and Peter B headed for home, with some tail wind?
Coming out of Knaresborough we met James coming the other way, which was very reassuring for us, as the DB`s were now not confined to Low Bridge.  Dave P.

Four stalwart members of the EG’s retinue appeared at Low Bridge this morning, as well as Chris, who had a date in Barker & Stonehouse’s coffee shop. That’s life in the Fast Lane and well beyond our members’ expectations.  Greetings and farewells were disseminated and the unsurprising destination of Morrisons at Boroughbridge announced.  There was a pretty strong headwind, and of course plenty of the wet stuff, but we were undaunted and made steady progress, buoyed up by the promise of a good cuppa and a natter with mates.

The customary fayre formed the backdrop of the customary topic of conversation. We still think we could do much better than that overpaid lot!  The group split with one pair returning to Harrogate whilst a couple of Dave’s soldiered on to Myton and then Aldwark, before turning back for home. We probably only covered about 35 Miles, but it was nowhere as bad as you might have assumed.

To paraphrase Ratty, there’s nothing so good as messing about on your bike (even in these very wet conditions).

Thanks to Peter B, Daves W and P for your usual excellent company.     Dave S 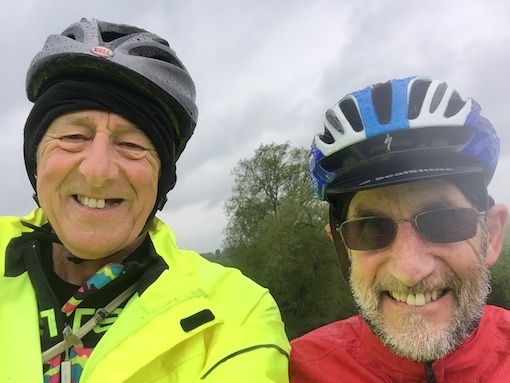