After the howling gales and heavy rain of Tuesday, it was a pleasure to meet up in the sunshine today! The suggested route  was to Bramham and Thorpe Arch . Mike W set off with a first group of speedy riders. Our group of 7 then departed at a more leisurely pace. Once we’d negotiated the bumps and lights in Leadhall Lane, we were soon climbing up to Kirkby Overblow and onwards to Sicklinghall. Geraldine and Joe had to leave us on the edge of Wetherby.. Brian decided to avoid the hill out of Collingham and meet us at Bramham. The rest of us made it up Jowett hill to meet Brian. At this point Brian suggested a short detour around the site of the Batttle of Bramham Moor. We weren’t quite sure that we spotted the battle field, but it was an attractive, quiet route. At Thorpe Arch we met up with the others . The  breakfast sandwiches proved very popular! On the way back, we bumped into Gordon and Allison at Spofforth. It was good to see them again.  After the final pull up the Showground hill we made our farewells. An excellent ride with wide ranging conversation and lots of laughter. Alison N. 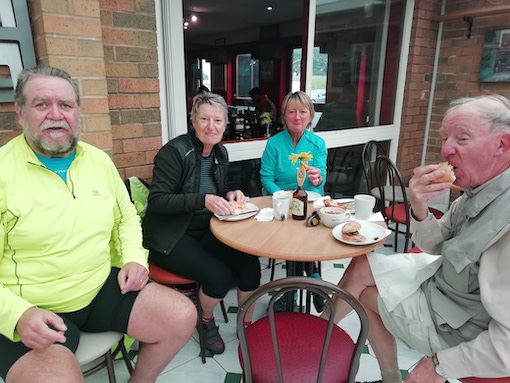 A group of 11 chose to head for Boroughbridge by a circular route, splitting into smaller groups on the road. In contrast to the torrential rain and strong winds the day before it turned out into a lovely day and we enjoyed sun and increasing warmth as we followed the route through Spofforth, Little Ribston and Walshford. A democrat decision to follow the back road over the level crossing to Whixley was taken and having negotiated the potholed and somewhat stoney road we interrupted the laying of new tarmac on the road into Whixley and managed to avoid leaving tyre tracks in the still warm and steaming surface. Arriving at the Bean in Boroughbridge we met up and enjoyed coffee an calories with Martin and Yvonne who were out on the E-Tandem. The return was uneventful to Knaresborough with some opting to go through Lingerfield and the rest heading straight into the town and homeward up Knaresborough Hill. A good autumnal day out in good company and covering just under 40 miles. Scenic and atmospheric pictures courtesy of Yvonne.    James G 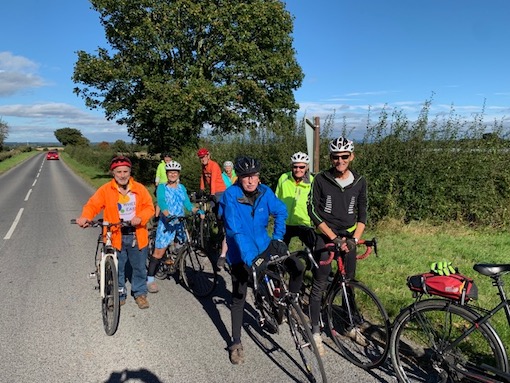 There were loads of us turned out this morning; some we hadn’t seen for so long we had thought they had left the country. It was good to see you out with us again Ian.

Leader designate, DaveW informed that breakfast as to be taken at The Olive Tree in Ripon, and the usual wham bam slam occurred. I just managed to hang on at the fearsome pace laid down by Chris and Eric (welcome too to Eric who had not been out with us for a while).

Electric assistance showed us a glimpse of the future up Farnham Rise, but we soon managed to exceed their 15.5MPH limit on the following downhill stretch.

The cafe was very good and we can recommend it to others. There’s a Sun trap outside for those rare days, and good service with manageable pricing.

The group split into three sub groups with one set off to Kirby Malzeard and no doubt places beyond. A second group turned for home whilst the rest headed to Badger Hill for lunch. Also a good cafe.

World wrongs, disputes and issues were addressed in the customary fashion, and we’re only waiting for an invitation from Joe Biden to point him in the right direction.

Thanks for a great day out to those mentioned, as well as PeterB, Bob, Dave P2 (great to see you back after such a short time out), Geoff, Colin, Chris, and Johnny, in no particular order.

It was mooted that a new subsection of the EG’s might soon be formed; viz. the EEG’s.