Good turnout this morning on a bright but initially chilly morning. Vince took a faster more energetic group to do a longer ride rather than the one designated which left seven soles who nonetheless were eager to go. Once we’d negotiated the honking of horns at Leeds Road/Leadhall Lane (somebody must have had to slow down) we progressed along Beckwith Road and then across to the Army Foundation college where we regrouped. Too early for coffee in Hampsthwaite we pushed on up Clint Back and across to Shaw Mills resting at the top to get our breath back. On to Markington and the Bishop Monkton. Slight deviation from the official route so we could coffee in Burton Leonard where photo was taken. My thanks to Barbara for bailing me out with coffee money as I had left my wallet at home. Tut tut. On to Copgrove and Knaresborough where we went our separate ways.

My thanks to Paul (who’d only planned to do the short ride), Diane, Karen, Barbara, Chris and Chris (formerly of Baildon now of Harrogate). Chris also acted as back marker. Great ride and company. 28 miles for me home to home. Colin B 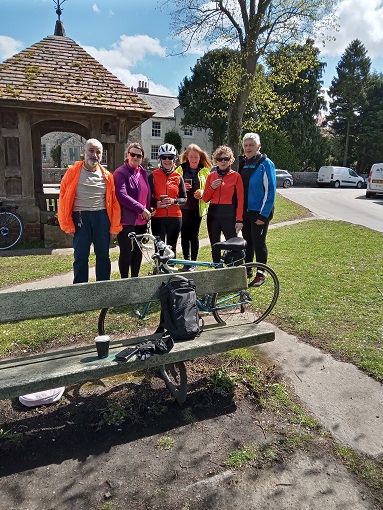