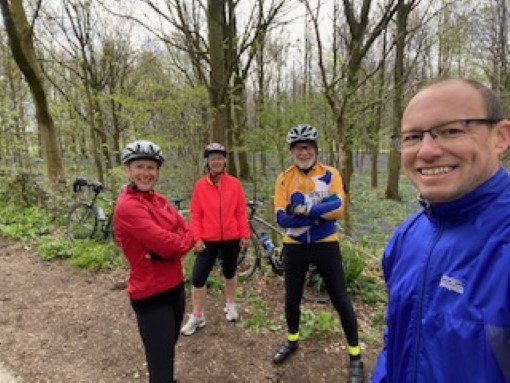 A group of five set off for the hills around Darley on a lovely, sunny but cold May morning. Apart from the temperature, it was almost like Spring!

We reached Ripley fairly quickly, despite a crowded Greenway, and passed through Hollybank Woods to Clint Bank then down to Birstwith. A left turn in Darley started the hill climbing and after a couple of hard miles, got to the eventual top of the climbs on Duck Street. I didn’t see anybody walking.

An easy ride down past Menwith Hill to Hampsthwaite followed, where we stopped for refreshments at Sophie’s garden. Then back to Harrogate via Knox bridge, just before the rain started. Great to see so many familiar faces after so long. 27 miles in very good company. Al D

A bright and pleasant start from Hornbeam augured well for a dry run out on Route 140 to Thorp Perrow by Alistair, Justin, David, Lucy, James & Tim. Except it started to rain a couple of times on the way out and then set in after the café stop meaning rain jackets were on by the time we trapsed through Kirkby Malzeard (where the wall is still awaiting repairs) and the ride had turned cold and harsh. Not to worry – it was warm and dry by the time we got back to Harrogate. Tall Tim 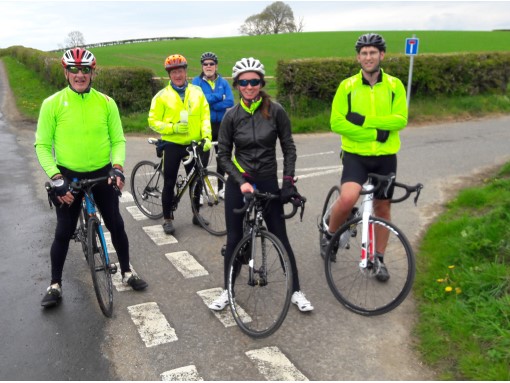 Despite the ominous weather forecast three riders, PCJ, John H and Andy A, set off from Hornbeam Park heading for Bolton Abbey and its environs.  On passing through Burn Bridge, we picked up Richard L and continued on to Kirkby Overblow.  As we made our way from Otley to Bolton Abbey, we picked up Peter R en-route.  At Bolton Abbey we opted to take refreshments at The Tea on the Green.  The service was remarkable prompt, no sooner had we placed our orders at the entrance then they were delivered to our table in the garden area. After some debate three riders opted for returning to Harrogate directly via Stump Cross and two, Richard L and Peter R, went for the via Embsay option.  No sooner had we left Bolton Abbey we were met by a very strong headwind and then came the torrential rain and hail.  Andy A and myself decided to take shelter at the Strid Wood Tea Rooms, and shortly after Richard and Peter joined us.  As the rain eased off Andy and myself set off for the return ride to Harrogate.  With a tailwind and now bright sunshine the ride back was quite pleasant. PCJ