Five poddlers’ set off for Ripon via, of course, the Greeneway, where we saw an unusually colourful bird , a Yellowhammer, I think and Liz gracefully and delicately came off her bike without damaging herself. At Ripley she cleaned herself up and promptly sped up Scarrah Bank and up to Watergate Lane.  At the turn off to Markington, near the iconic tree, Liz felt she had to zoom off to do important grandmother stuff and Electric Judith kindly went with her.

Three of us continued speedily, passed the very interesting gypsy camp, Fountains cafe,  the Deer Park and finally reached Ripon, where Monica threw herself at the feet of a gentleman who prompty picked her up, locking her in a huge bear like grip, and Barbara and I found a lovely cafe which sold interesting cakes, good coffee and real fruit…with an unremembered name.

As we eventually set off home we kept getting muddled in with a speedy group of Wanderers who seemed intent on going the scenic route home, no doubt having been to Carlisle and Helmsley before tackling Knaresborough Hill and overtaking us yet again.  A pleasant few hours cycling and no rain.32 miles Caroline G 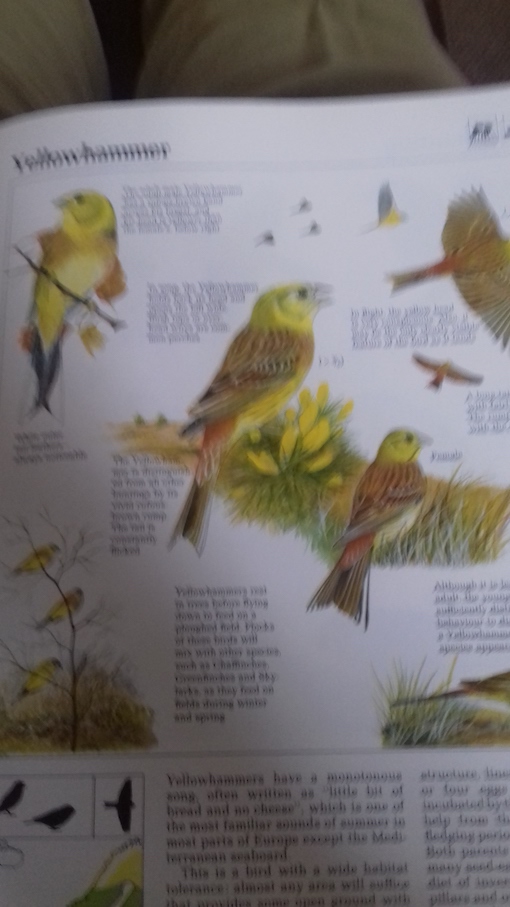 At Hornbeam this morning there were a few Poddlers, a few Long riders and a lot of Wanderers. Zoe kindly lead off a large number of faster riders, I took a group of 11 and Keith M had a group of ten.  The route was Ripley, Clint, Burnt Yates to Brimham then down to Fellbeck and on to Dallowgill. The weather was dull but it was dry and the views were still outstanding.

My team photos were taken above Brimham and on Dallowgill but the poor light meant that they didn’t do the views justice. After conquering the Grantley Hall hills, our coffee stop was at G andTs at Risplith. The faster group had only arrived a few minutes before so it was good to have a chat plus my group were very impressed with themselves in being nearly as fast! Ice cream, bacon sandwiches and coffees were rapidly consumed along with a lot of chat. Before we had finished Keith’s group had arrived though now down to five as the other five had returned straight from Brimham.

My group just had to stay a bit longer to catch up with them before returning via Sawley, Low Gate Lane, Fountains Abbey road, Watergate Lane and down to Ripley. Surprisingly we had only done 37.5 miles. 2,741 feet. Thanks to Chris R and Colin B for backmarking and everyone for a good day out. Liz P 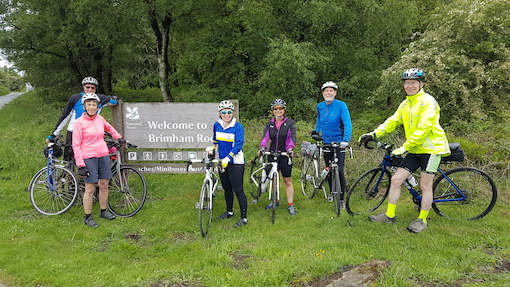 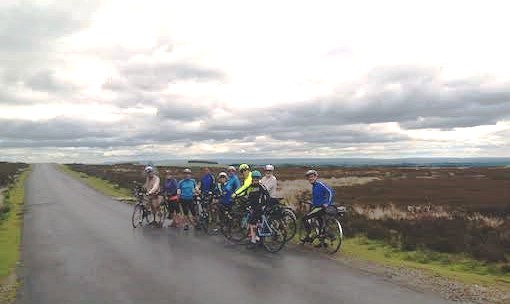 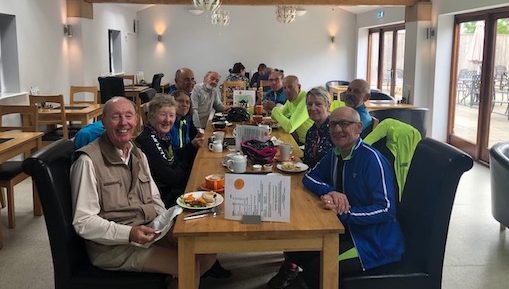 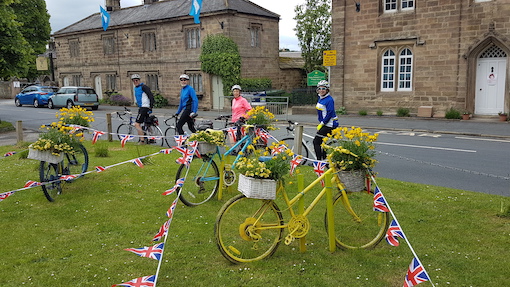 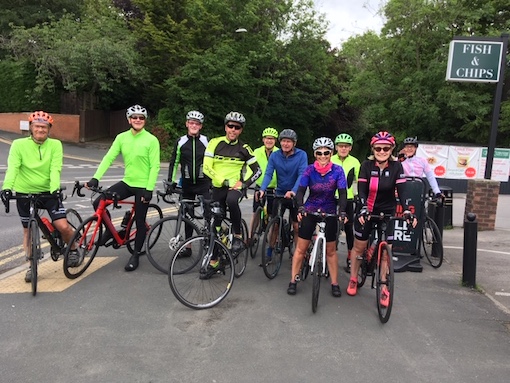 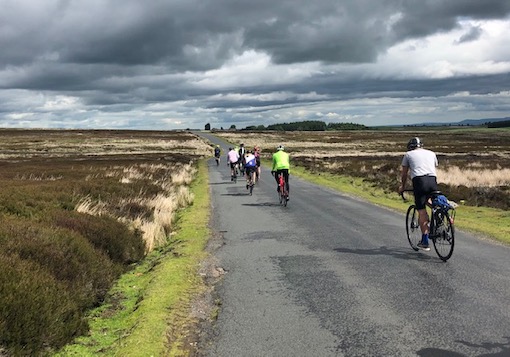 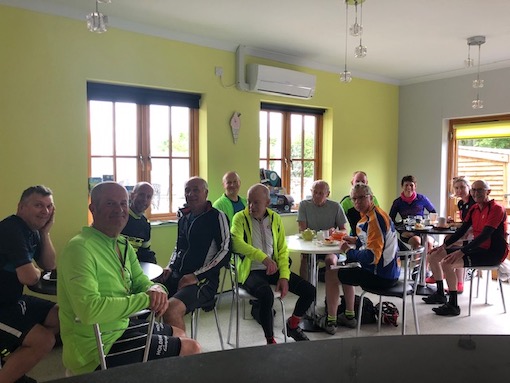 Today we were tempted by Eric’s EG ride to the Glider Club at top of White Horse Bank. It was great to ride a flatter route that didn’t head to York and enjoy some very quiet lanes on our route through Sessay and Kilburn with ever closer views of the White Horse. Our only climb of the day was the 25% ride up White Horse Bank then a good welcome at the Glider Club for lunch and great views with excellent visibility today.

We had a good chat with Eric’s group who had a staggered start to avoid cafe shock and we returned down White Horse Bank to see the drama of the rather large lorry who had followed his sat nav and got wedged down the bank. Through Bagby where we met Jeannie who had a late start and we rode back together for a second cafe stop at Bean in Boroughbridge.

64 miles, a welcome change of route and one to add to the calendar although the cafe at Bagby Caravan Park can accommodate bigger groups. Gia M 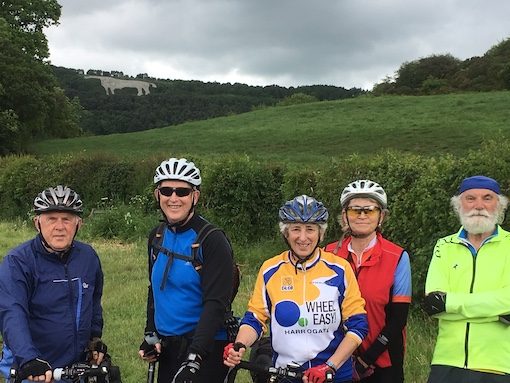 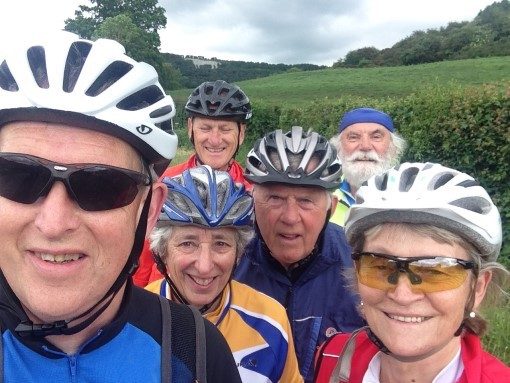 There were just three riders (Peter Roberts, Dave Wilson & Eric) at Low Bridge at 9.30am for this month’s EG’s Long Ride, and we were joined by three more (Richard and Lesley S, and Terry S) just up the road at Piccadilly Motors.  I also received a text message from Gia saying there were a further five in her group much further up the road.  I spoke to the Glider Club cafe to confirm there would be 11 of us arriving for lunch and the lady explained she was the only person in the cafe and we would therefore have to be very patient for our food.  To avoid the cafe shock of everybody arriving at the same time, I delayed our group with an unscheduled coffee stop at Boroughbridge – some EG addictions are difficult to kick!  Dave W wasn’t ready for an early stop so continued on his way, and was never seen again.  As we left Morrisons, eagle-eyed Richard spotted a deep crack in Peter’s rear tyre.  On closer inspection the crack went down to the canvas, and extended 50% around the tyre.  So Peter returned slowly and carefully back to Knaresborough.  Hope you made it without any mishap, Peter.

The four of us made our way fairly rapidly to White Horse Bank.  As we climbed the Bank, I caught up two other cyclists, who invited me to join them on their ride, explaining that they had already climbed Boltby Bank, Hawnby & Wass Bank; they had just descended White Horse Bank to turn round and climb back up it.  Chapeau to those guys!  I declined their kind offer and didn’t dare ask where they were going to for the rest of the day.  We then rounded a corner and found the tarmac littered with broken branches:  “They weren’t there when we went down five minutes ago” explained the guys, and coming through the trees above us we could hear some strange noises.  A couple of hundred yards further round the next bend we saw something we’ve never seen on White Horse Bank before: a huge artic – see photos.  The driver had got further down the bank, decided that he could go no more and was now trying to reverse back up to the top.  The strange sounds were the tractor unit bouncing up and down with axle tramp as he applied maximum power to reverse his rig up a 20% gradient around a hairpin bend, but the trailer was not moving one inch.  He was stuck!  With the road blocked we had to dismount and walk round the lorry – so that ruined my PB for today!!!!  The driver was delivering a load of Diamond Fertilisers to a nearby farm, and his SatNav had directed him down White Horse Bank.

Gia’s group, plus EG Peter B, were finishing lunch at the cafe when we arrived – much to the relief of the lady in the kitchen.  Colin T was admiring the wonderful panorama from the clubhouse, and  pointed out Great Whernside to me.  Now there’s a surprise!

Peter returned with us, and the 5 of us called into Chez Siswick in Roecliffe.  We spent over an hour enjoying the hospitality of Dave and Jan, and it was great to see Dave looking so good and cheerful just seven days after his accident, and six days after his hip replacement.

No sooner had we left Dave’s house, then 100 yards up the road we came to another halt, with a group of cyclists stopping traffic in both directions.  One of their group had come off his bike rounding the corner outside the pub.  He was motionless on the road for some time, before being helped to a bench outside the pub, with a lot of blood on his face from a head wound.  “Was he wearing a helmet?”  “No, he was the one member of our group who never wears a helmet”.  A sad and painful lesson.

I arrived home at 6.15.  This Harlow Hillbilly had completed 72 miles door to door, with 3,500′ ascent.  A very enjoyable and incident packed EG long ride! Eric W 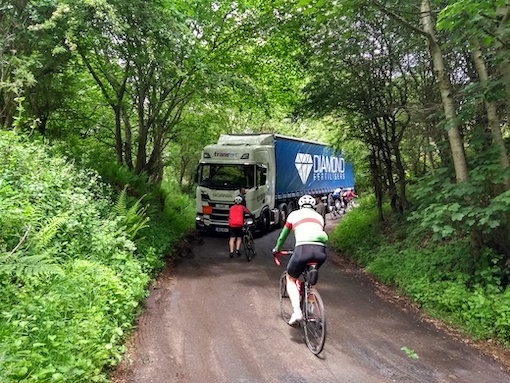 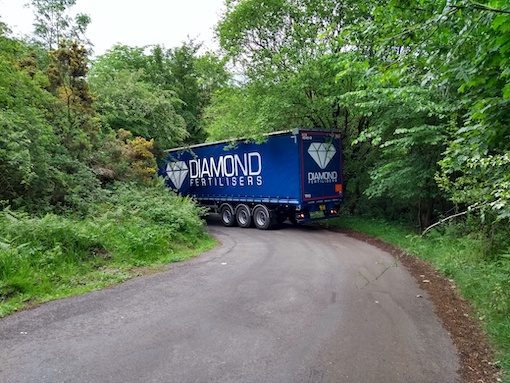 Text to Dave Siswick with best wishes resulted in the reply, if near call in, so it was off to Roecliffe, but not before we had tried out Norman`s new electric front wheel drive bike. Dave was with his Aunt and Uncle, who chatted to us about his days cycling around Huddersfield renown for its lumpy bits, they made us very welcome. (see photo).

Nick had a plate of scrambled eggs and beans, did he have sausages? Well Alan had scrambled eggs, beans and a pile of sausages, was it guilt but he offered everybody sausages, including two Ladies who sat near us, all declined except Nick.

As the two Ladies left the cafe, the offer was made again, something like can we not press to a sausage, quick as a flash came a classic one liner. “I have not had an offer like that for many years now”, Brilliant.

Caroline gave the phone number of the cafe 07851 395923 for us to use  starting around the July period to check if the cafe is open before calling in. This is because Caroline will be in hospital and the staff cannot make most days. Caroline will be donating a kidney to her husband, so from all of Wheel-Easy we send Caroline and her husband our best wishes and a speedy return to everyday things.

The faster riders then headed for Fountains Abbey/ Studley Park, with Dave P and Dave W heading for Bishop Monkton, here they parted company, Dave W to Knaresborough and Dave P to Markington and Ripley.

For Dave Pit was steady away up the Greenway, at the Bilton Lane crossing DP slowed down to less than walking pace to let two cyclists through, then suddenly his front wheel slipped away and he went down rather hard. He was helped to his feet by the cyclists, shaken but not stirred but with sore ribs, and the bike was rideable, what had caused this? Whist looking at the oncoming cyclists a discarded plastic vapour smoker thingy had blown under his front wheel. Thank goodness the pace was very slow, but sometimes as we well know slow or stationary falls can be the worst.

On the positive side the rain held off, and we were impressed with electricity as a motive power. Dave P. 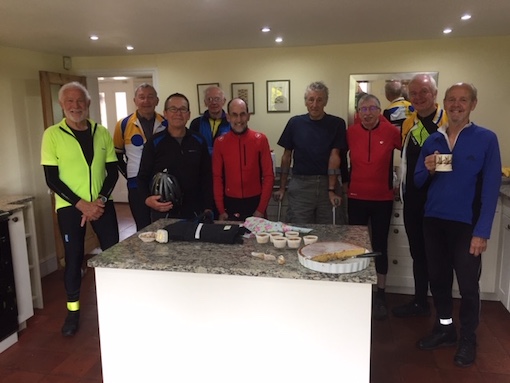 There were nearly five riders for the Long Ride but Dave R abandoned us leaving four to head for Ilkley via Kirkby Overblow and Menston. Well that was the plan. At Kirkby Overblow the lead rider took the shortest route to the A61 avoiding Barrowby. Now we are riding down the A61 and there appears to be some indecision about the route which resolved itself by us all turning right to Dunkeswick. Apparently, the road to Weeton was closed but the kind Yorkshire Water engineers let us through. At Pool the choice was Old Pool Bank or Creskeld Lane, with the latter being the chosen route. This was good decision as Creskeld Lane was bordered by a mass of rhododendron trees in full bloom. The ride then proceeded without any more diversions to Menston via The Chevin. On reaching the top of Moor Lane the signage indicated that the road to Ilkley was closed. Again, more friendly Yorkshire Water engineers let us pass through the works.
After taking refreshments at Christ Church it was time to return to Harrogate. The route back was initially to Askwith where the final part of the route would be decided. As we were leaving Ilkley a peloton of about eight riders passed us but not at a great speed so we decided to hitch a ride and breezed along with them to Askwith. The final route choice was Norwood Edge. After a circuitous route through Otley it was onward to Farnley, Norwood, Penny Pot Lane and Harrogate. PCJ 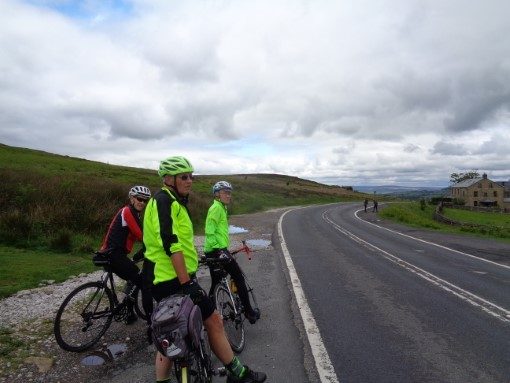