With no ride or leader, Dennis very kindly stepped in to lead and had a plan! The short ride this week was a tour of golf courses.

After going past Pannal Golf Club it was on to Spofforth Golf Club along Hags Lane. On to little Ribston sped seven riders. We saw Billy Whiz and Alison whizzing the other way, so Sur John went off to join them (to be seen again at the Bilton Lane X-roads as we returned).

The ride report writer was distanced as she stopped to chat to James G who was on his way for a coffee at St James retail park – Sunday morning habits are hard to break! Was good to see you James.

On to Ripley, via Scotton Golf Course. One of the group wanted more miles so after coffee went through Holly Bank Woods and on to Hampsthwaite the remainder returned via the Greenway. Thanks all for your company. Jill J 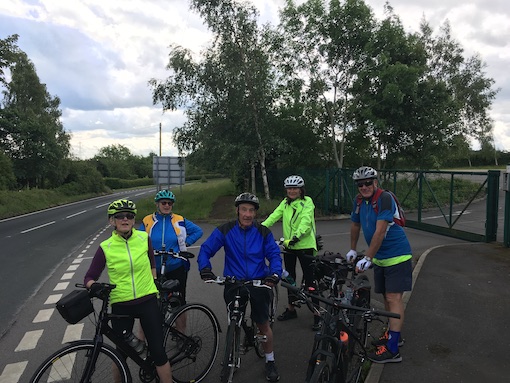 Thirteen riders assembled at Hornbeam for today’s Medium ride. The weather was fine, the riders experienced and the company convivial. What could possibly go wrong?

In all respects the ride was pretty straightforward. Up to Kirby Overblow by the usual route, then down to Wetherby – Gateway to the South, along the cycle track to Walton, returning via a dogleg across the old RAF Marston Moor airfield to Tockwith, Catall and Walshford.

We decided to have coffee in Wetherby as the alternative (Thorpe Arch) came too early in the ride. So off to Wetherby  again where we stopped in The Shambles as we would have overwhelmed North Rd Deli. Finally, we went back to Little Ribston where riders split up to get home either through Knaresborough or to Spofforth and the Showground.

Unfortunately we created a record in that out of a total of 13 riders, we managed at some point or other to lose 12, some of them multiple times! Fortunately we managed to regather most, but apologies to Liz and Kevin who took a comfort break in Wetherby, said they’d catch us up and were never seen again. Hope you got home safely. But despite it all, we did have a jolly time. Al D

Eleven of us went out and six came back. We were joined by a new person, Chris, who we lost on the climb somewhere up Dike Lane towards the drop down into Pateley. We waited and Grant went back to check, but we think he dropped back and did his own thing or joined the group behind us. Chris – sorry we lost touch with you! Martyn and Dave B had to head directly home and Mark T decided to extend his ride and head up towards How Stean Cafe.

After our cafe stop we added a route variation and headed back via the climb up Wath then Dallow Moor and Sawley. In the end, we did 40 miles at a 15mph average. A good blast in good weather. For those of us doing the White Rose Classic Sportive in two weeks time we need to get these kinds of miles in our legs. It’s too early to taper! Michael I

Nine set off from Hornbeam in the sunshine towards Hampsthwaite via Penny Pot lane . All was well until the climb up to Dacre . I  had a mechanical just as we started to climb the hill, I changed gear too quickly and managed to jam and twist my chain. Luckily we had been just joined by Dan . Dan very kindly managed to untwist my chain using a couple of allen keys and after a few minutes I decided to climb up the hill to Dacre.

We meet the second Medium Plus ride at Dacre and Colin looked at my chain and declared it fit to ride- good enough for me . Eric left us at this point to go on to Summerbridge and home . At some point we lost another member and eight went upwards towards Pateley Bridge and Tea Cups. It was Angela’s first time down Yorke’s Folly which is always an adventure 🙂 Coffee stop at the very reasonably priced Tea Cups with the added benefit of  toasted tea cakes comprising of three halves!

We cycled home via Glasshouses and lots of hills to Smelthouses and Brimham Rocks. After the hills everyone was delighted to cycle down to Fountains Road and Scarah Bank. We continued back to Harrogate on the A61 through Knox. No mechanicals on the way home and all back safely. 37 miles and 3,182 ft of climbing – according to Garmin .

Many thanks to all for good company , a great ride and especially to Dan and Colin for getting me back on the road . Zoë C 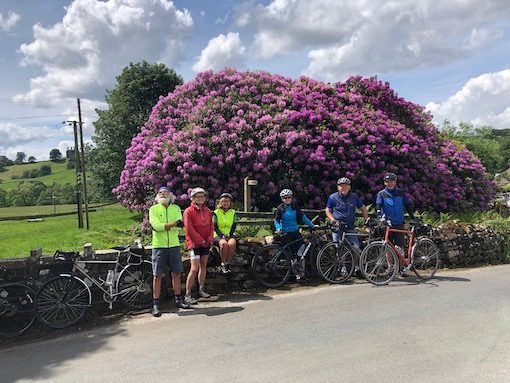 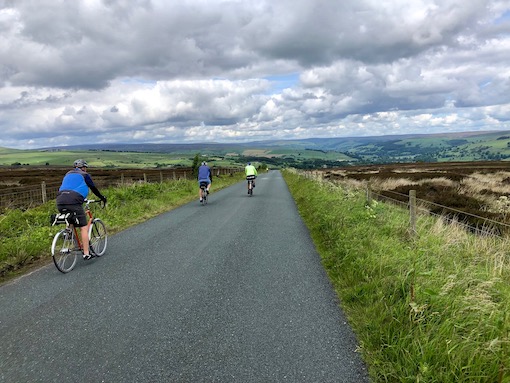 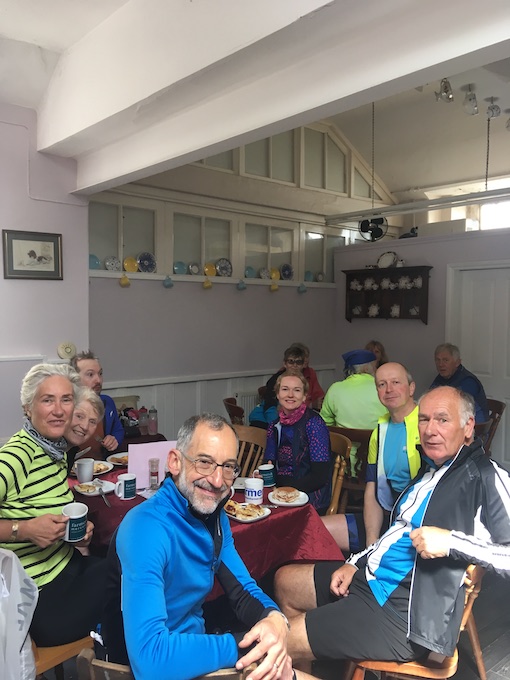 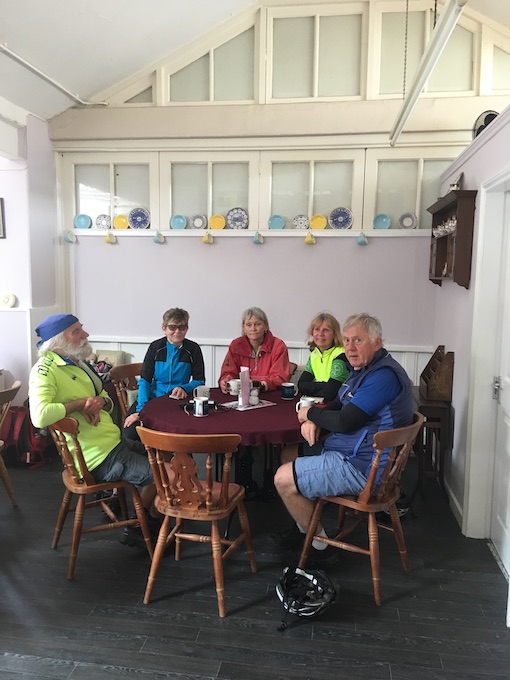 We started with 12 people from Hornbeam with a split between a faster and steadier group developing soon after Knaresborough. It was an easy & familiar ride to the first cafe stop at Thirsk. We headed out of Thirsk towards Newby Wiske & Northallerton and it was after that we encountered some more rolling terrain around Upsall, Kirby Knowle & Felixkirk, but nothing too difficult.

On to the second cafe stop with some excellent cakes at Sessay where we met up with the faster group, then back to Harrogate via Boroughbridge. A very enjoyable ride in good company on some lovely quiet roads, many of which were new to some of the group – about 80 miles for most people, 100 or so for Rob who cycled from north Leeds. Jill F

After a brief discussion with Jill it was agreed to split the group in to two with myself leading the slightly faster group. We made our way to Thirsk via the usual route of Boroughbridge, Asenby and Topcliffe. After refreshments at the Arabica coffee shop it was onto Northallerton. Richard L, who was out on his first Wheel Easy ride following his recent accident, decided that Northallerton was far enough so summoned up transport for the return journey. The remainder tackled the lumpy foothills of the North York moors. Having stopped at Sessay for some light refreshment we were joined by Jill’s group and there ensued an exchange of some lively banter. On the return to Harrogate we did encounter some dribs and drabs of rain but nothing too serious. PCJ 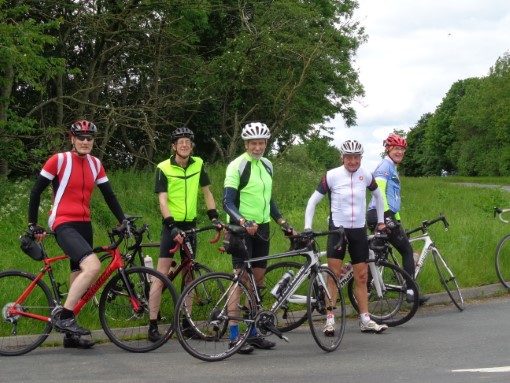 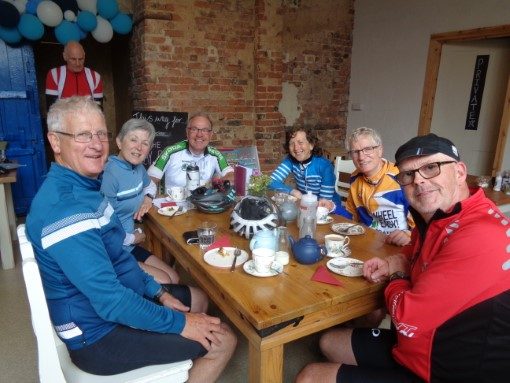