There were a lot of Wanderers this morning, Tim went off with the brisker group followed by Mike with another group and I took the last group. At least Abbey Road was dry, not like the black ice on Sunday, then on to the A59 passing the large housing construction site, avoiding the mud on the road, before crossing the roundabout to Goldsborough. The sun was out with dry roads as we made our way through Coneythorpe, Arkendale to Marton then Grafton. After the village, going downhill with a sharp right bend, there was a very large puddle across the road in front of us and a quick observation made us aware of the ice and slush around it, so it was a quick dismount and walk!  Through Aldborough and to Beans cafe in Borougbridge, where we saw lots of cycles parked up! It was suggested we try Bowe & Co café and deli on the main street, apologies to the rest of the Wanderers for not joining you! It is a very nice small café with quick service, not too much room for a large group though. After refreshments we carried on through Roecliffe to Bishop Monkton where we stopped for a quick ‘referendum’, we decided to ‘leave’ the planned route and carry on to Markington then down Scarah Bank to Ripley and back along the Greenway. 35 miles. Chris R. 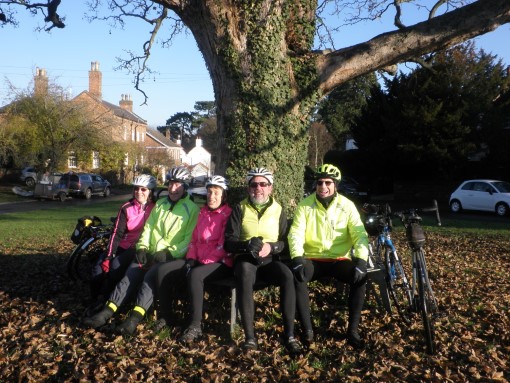 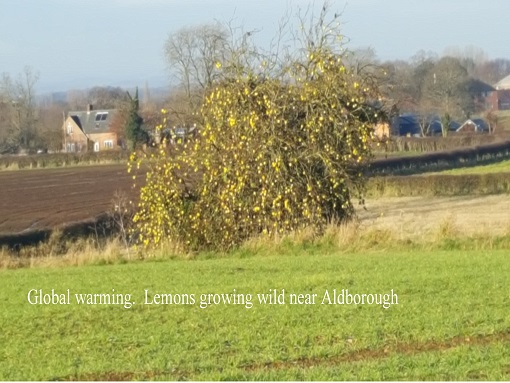 It was a cold but bright morning that brought out plenty of riders for the ride Chris R had organised. Having split into 3 groups I was part of the brisker group along with Mike(x3) Glynn, Beverley and Phil. So, under the sub-leadership of Mike W we headed out to Low Bridge. Aware of the adverse conditions on Sunday we rode carefully along Abbey Road and then Goldsborough. No issues until we tried to get across a very busy A59 to head for Flaxby. We seemed to be there ages but I suppose it was only 4 or 5 minutes. Once safely across with Mike keeping a careful eye on use all we made our way through Flaxby and Coneythorpe to Arkendale. There was a little bit of discussion on the route to the coffee shop but we stuck to the published route. So on to Marton and then towards Aldborough. Thankfully we were on our guard as Phil shouted ICE as we went round a right bend. The road was flooded and ice was present across the road. We all dismounted and walked but even that was a bit dicey. Once clear we proceeded towards Aldborough but had a photo shoot as we saw a lemon tree in a field and it appeared in full fruit !!!!!? well – from the road it did. Turned out to be apples which still hadn’t fallen. Excitement over so onto Boroughbridge. Plenty was pretty fully so we settled for Beans where the faster group were already being replenished. Very quick and efficient service. Suitably ‘filled’ on to Roecliffe and Bishop Monkton and then across to Farnham Lingerfield Scotton and then Knaresborough where we started to split up to go our respective ways. Great ride, acceptable weather and fab company. 34 miles. Colin B 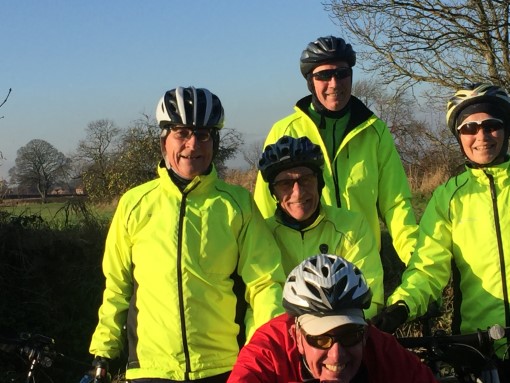 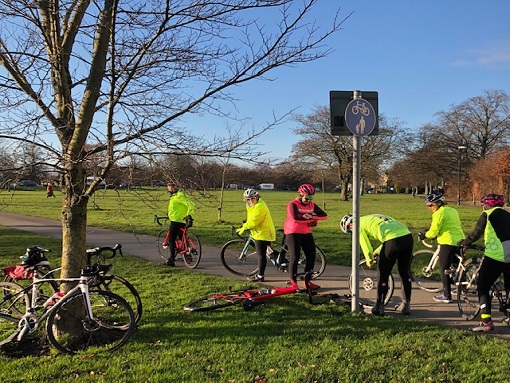 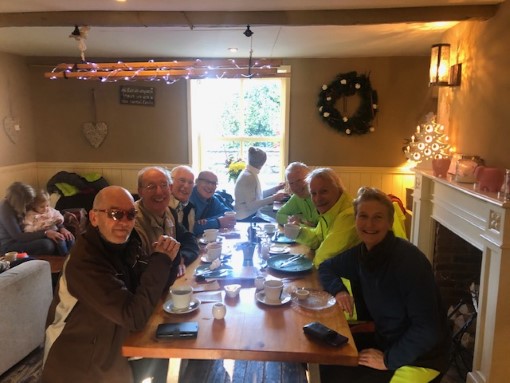 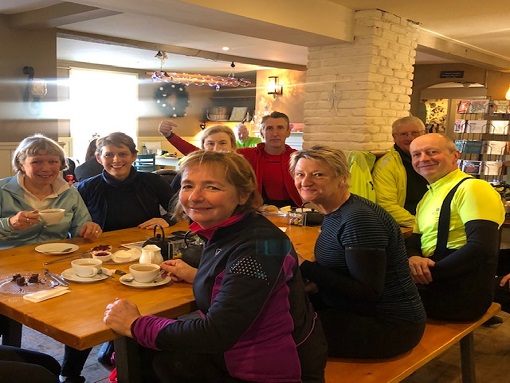 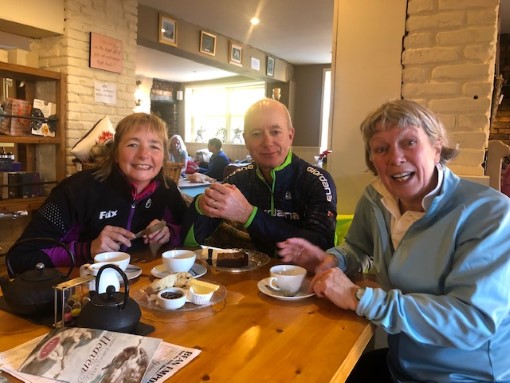 We were anticipating a good day today and we weren’t to be disappointed. Our destination as scheduled was Pateley Bridge but a cautious approach was adopted, with suspicion of ice early on, staying away from untreated roads and so slight modification to route. Starting from Hornbeam Steve, Sue and James collected Colin, Paul & Alan at Ripley before heading off up Scarah Bank in beautiful sunshine heading directly for Sawley and Grantley (just a bit hilly as several of us have been somewhat cycle inactive but all coped admirably) to join our intended route up to Dallowgill Moor by which time there was no hint of ice, conditions were near perfect, if a little cold and visibility was a delight. Nice coffee stop with Christmas Scones (yes, new to us too!) at Wildings. Returning via Bewerley & Glasshouses, Colin & Alan splitting off to Brimham Rocks via Smelthouses, Sue, Steve, Paul and James via toll bridge, Birstwith, Clint Bank, Greenway. Many thanks to all for memorable day on one of those perfect winter days. We were all missing Kevin and our best wishes of course are with him for a speedy recovery.  AS 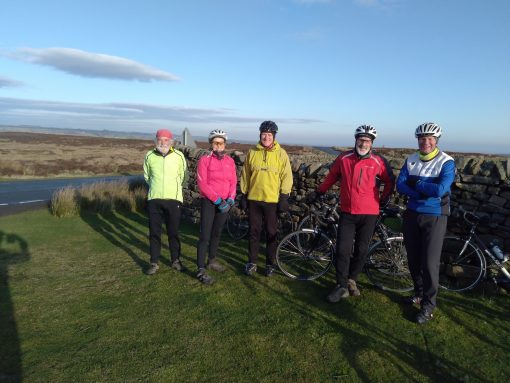 Although it was a day when a ride from Masham to Lofthouse would have been very rewarding, the shortening days favoured something a little nearer home and flatter.  The plan was to visit Spilman’s cafe at Sessay which, according to its website, was to be open.  To add variety to a well-worn route and to avoid a longish detour, we opted to use a short bridleway section leading to the site of the former Pilmoor station.  I’d ridden it in mid-September, after the rains had started, and thought it would be rideable on winter bikes.  While there was some sucking through teeth at the thought, fears were unfounded as we cycled in lovely winter sun alongside a wood which was bounded by a dry and firm bridleway track, carpeted in dry golden leaves from the woods (see picture: our thanks to Peter J).  Apart from an unshipped chain caused by an errant stick lurking under the leaf carpet, the bridleway was a pleasant experience, in contrast to some of the muddy, slimy roads we came across.  All of this had been achieved after an uneventful village hop through Gt Ouseburn, Aldwark, Tholthorpe and Raskelf.  At Raskelf, we spotted a roadside sign for “The Feed Room”, which turns out to be the successor to the much-missed Purple Partridge tearoom, which closed about 3 years ago, replaced by a more up-market evening/ weekend eating house, which has gone.  The downside to this is that the Feed Room is closed Tues to Thurs – fine for Sunday rides, therefore.  Once in Sessay, I discovered once again that the Internet served to mislead me as Spilman’s was closed, despite their own website front page telling me it was open.  Later, on searching their site more thoroughly, there was a less prominent announcement that they had closed for the winter, apart from seasonal events this month. Lesson learned. Immediate alternative cafe options in those parts are limited – Thirsk, Coxwold and Easingwold were at least 30-45 minutes away.  But I remembered from years ago that Richard Pugh had mentioned a cafe on Dalton Industrial Estate so off we went in search.  True enough it’s there, calling itself the Dalton Diner.  The American theme was embraced by Eric when he opted for the “USA Breakfast”.  An incredible pile of food duly arrived, including four of most things, notably the fluffy pancakes.  For once Eric was beaten!  It turned out that he’d been given the small 8” pancakes.  Heaven knows the large ones.  The cafe was very welcoming and service efficient and cheerful.  Fears of a greasy spoon experience were unfounded but it would benefit from some investment in the tea and coffee department, as I had to issue an “instant coffee” alert.  Cheap and cheerful, but no place for a veggie.  Eric gave us a medical update on Kevin D and Dave S and we all wish them a speedy recovery.  The return leg was via Rainton, Marton le Moor and Boroughbridge, where three of the eight headed direct to Knaresborough and the rest headed through Roecliffe into a headwind that was a surprise.  From Bishop M it was the usual route to Drovers and the Greenway from Ripley home.

An enjoyable day’s winter riding in clear crisp conditions, but with something a little different around lunchtime.  Mileages were in the range 45-65, depending on the start point. Terry Smith 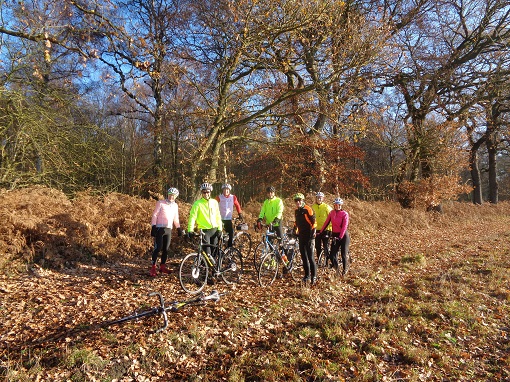 We had a fair number of riders at Low Bridge, with the weather and the forecast being made for excellent cycling.  However, our first thoughts were with Dave Siswick. Dave is first rate clubman and is always the first to help if any fellow cyclist has problems, so it goes without saying that we will all be there for him and wish him a speedy recovery.

Colin suggested Boroughbridge as our first stop and Chris suggested we meet in the top cafe (on the Way of the Roses route), the “B” team headed straight there, but the “A” team split up to take different routes there, however we eventually all took caffeine and calories together in the rear room.

The A`s seemed a bit indecisive but the B`s no messing headed straight to the Dunsforths admiring the vineyard on the way to take refreshment at the post office in Great Ouseburn, then home via Arkendale Farnham and Knaresborough.  Dave P