Short ride, short report.  Didn’t ride today as it was too icy for my liking. Geraldine and I walked home last night from the bus station and nearly slipped over several times. Apologies to those hardier folk who are/were wanting to ride.  0 miles.  Joe

A very hard and cold frosty morning at Hornbeam and the official rides were cancelled. The Medium Plus Group, Mike W leading, decided to carry on the published route and alter the route according to the road conditions. Chris and I were undecided for attempting a ride to Masham, therefore we set off with Mike’s group and would make a decision at Low Bridge. At Abbey Road, Chris and I decided we would go to Farnham and then veer off to Ripon and possible on to Masham. Unfortunately, none of the group were aware of the black ice on the road and came across Dave Siswick laid on the ground. It was sheet ice all around and very slippery as people tried to help him. Hope Dave did not have any injuries and he is okay. After a group discussion it was decided for safety reason to abandon any proposed ride and it was up to individuals if they wanted to carry on. The group returned to the main road, Chris and I decided it was safe to walk along Abbey Road and then cycle on the main roads to Boroughbridge. The sun came out and the main roads were salted and we made our way to Aldborough. I met my friend walking along the road who told me to be careful the roads were very icy and not all had been gritted. Also, she said a cyclist had come off on the Boroughbridge roundabout as he tried to avoid a motorist cutting him up and hit black ice. After this warning. Chris and I thought better of going on back roads and lanes to Thirsk or any further North as the icy conditions would last all day. Not only that the sun was very low and blinding at times and motorists were flashing pass very close not realising we were trying to avoid the inside icy edges of the road. One impatient motorist honking his horn at us as we slowly negotiated a right turn cautiously as we noticed ice on the road. It was a pleasant ride along to Skelton along past fields coated in frost and the sun trying its best to warm up the day. On reaching Ripon we headed to Studley Royal up the long drive to the top, the estate road had been salted and was ice free. At Fountains we stopped for refreshments and a guide took our photo by the Christmas tree. Realising that it would have been very cold and icy up towards Masham, we both agreed it was more prudent to leave Masham for a better day, as we noticed the frost and ice still hung around in the shadows. Chris and I negotiated carefully down the hill by Fountains and up the long hill to the Ripley road. Onto Ripley, cycling very gingerly along the Greenway as it had icy patches, in which a few walkers very kindly told us to be careful. Arriving at Bilton Cross, Chris decided not to carry on the Greenway, turned up Woodfield Road keeping on the main roads home and I straight up Bilton Lane to home. 34 miles. Liz F and Chris. 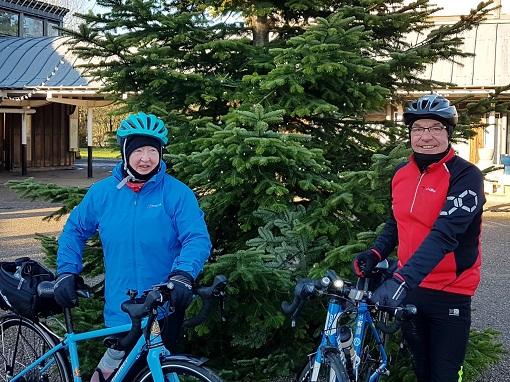 Not many people at Hornbeam this morning, understandably, as temperatures reached the dizzy heights of two at the start.   Despite this a decent number, nine, opted for the Alternative Medium Plus ride to Masham.

The Greenway was avoided due to potential ice and frost so main road it was onto Ripley. Chris left us here due to a mechanical, brake cable I believe, and off we went up Scarah Bank. Main roads were absolutely fine with the only doubt was if we were to go via or close to Greygarth monument. Main road was the choice and rightly so, and off to Kirby Malzeard and Grewelthorpe where we decided to abandon the idea of decent down the Swinton Estate due to potential frost and ice.

By now the dizzy heights of 4 degrees, no wind and beautiful sunshine a cracking ride was in progress. Coffee was taken at the always reliable Jonny Baghdad.  Discussions were had about the route back, and Helen came up with an excellent route. Out of Masham and left, heading towards Snape. A nice social pace ensued with plenty of chat and topics, ranging from Pheasants, Gary Glitter and the Rapha Festive Fifty!  Onto Carthorpe and Kirklington where the only slightly dodgy side roads were found, but taken with care, absolutely no problems.  On into Ripon with low sun now the only problem and the direct route home via Knaresborough Hill.

A really excellent ride of approx. 52 miles and 2500 feet climbing. Many thanks to fellow riders, Paul, Tim, Darcy, Helen, Fred, Michael Chris and Andy, for a very enjoyable few winter miles, with nobody left behind. If only Politicians kept to their promises as well.

With apologies to Darcy for cutting him off the photo. My camera skills are somewhat lacking. As in non-existent. Mark T 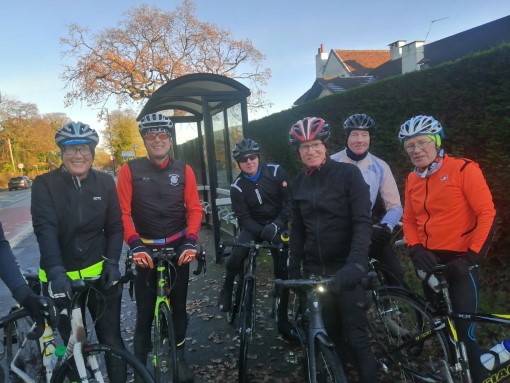