Eight headed out from Hornbeam in the usual slightly uncertain weather conditions towards Knaresborough to collect Lesley and Richard from Piccadilly Motors and head by the direct route to Ripon, missing out the loop through Littlethorpe today.  Skirting round Ripon’s centre via Williamson’s former paintworks, we had the heart-warming sight of Martin greeting his mother who was on her bike heading towards the centre of the town (via pollution alley, incidentally).  Any invitation to join us must, I think, have been politely declined. Cutting through the western edges of Ripon took us along Bishopton Lane and through some other older parts of the town, not seen before (by me at any rate).  Here the long drag up to Grewelthorpe began.  Choosing to support the community cafe today, we settled down outside in good sunshine for elevenses at the appointed hour (so good progress for the first 20 miles).  Full tribute is due to the one volunteer, initially, who served us very efficiently and in some very nice crockery.  Coffee downed, it was time for the hilly bit of the course, which began too soon because the ride leader got it wrong by bringing the group up a very steep gradient past the school in the village – apologies to all who followed me.  Pausing while a farmer blocked the road with his tractor, for the very good reason that he was moving cows from one field to another, ups and downs followed in succession for the next hour or so (c 9 miles), as we skirted round the western edge of Masham to Healey and up to Ellingstring and grand views across Wensleydale and east to the N York Moors. A welcome 9-mile descent to Bedale and lunch at North End Cafe followed.  As we were the only customers (I think) service was prompt and the food tasty, definitely a cafe to come back to.  Returning home using the A1 corridor to Ripon, the heat of the day was much in evidence as was the sun cream.  Mercifully, this really was the flat bit of the route.  Through Ripon to Bishop M the first parting of the ways took place as Lesley and Richard headed for home and, later, the races in Otley.  The Drovers climbs  soon sorted the hares (Andy, Darcy and Graham) from the remaining 3 who shall be nameless (except me  of course), as we made our various ways back to HG.  It turned out to be hillier than billed, with almost half of the ascent in the middle 20 miles, longer than billed, with final mileages in the high 60s, and hotter than billed – a real taste of summer at last.  But, as the farmer’s roadblock served to remind us, we were at leisure – others are not so lucky on a hot day.   Terry

The EG monthly long ride report  AKA: the Waters boys day out in the sun! 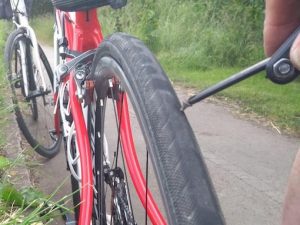 First Wednesday of the month! The cunning plan is that some EGs go out earlier than usual (9am on this occasion, to be precise), and cycle a bit further than usual (101 miles on this occasion, to be equally precise). Today’s ride leader was Geoff (Waters), and he was joined on the ride by Eric (Waters). So, yes, it was a Waters family outing! But where was everybody else? Answers please! In fairness, we did start with one more EG, our esteemed leader Dave Preston, but Dave announced at the outset that he wouldn’t be tacking the full ride but hoped to ride as far as Selby. We made good progress to the Boston Spa motorway roundabout, where DP announced he would have to leave us and tootle at his own pace – as far and as fast as his painful knee, Ibuprofen and Voltarol would allow. DP reported back later he had made it slowly to Thorpe Arch, York and Beningbrough – excellent result in the circumstances. Meanwhile, the Waters family outing was proceeding south, but before reaching Bramham, mechanical number 1 occurred: my rear gear cable snapped! With some fettling of the limiter screw I shifted the chain from top gear to the next one, and with 3 chainrings at the front, I could ride with 3 gears. We stopped for coffee in Selby, and soon after we had mechanical number 2: Geoff collected a 35mm screw fully embedded in his tyre, requiring a screwdriver to remove it. So after another short delay replacing the inner tube, we continued to Howden for lunch, and a final drink stop at the self-serve honesty cafe at Neyburn Station on the York-Selby cycle path. We arrived back in Knaresborough having completed 92 miles, averaging 15mph, and then this Harlow Hillbilly continued on to – err – Harlow Hill, to complete 101 miles. Wonderful day, wonderful weather, shame more riders didn’t enjoy such a great ride. Eric 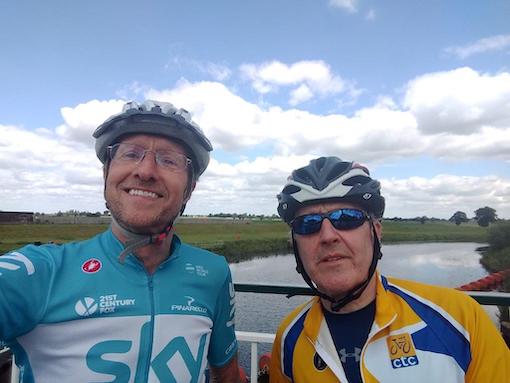 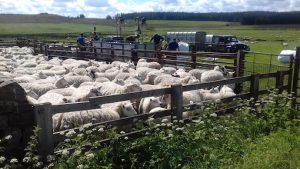 After a quick bit of bike brake repair from a lurking bike mechanic, three ladies set out for Little Almscliffe in bright sun, no rain, warm temperatures and gentles breezes……I think that is called summer.   We eventually arrived at a closed Penny Pot Lane, where Jean bravely  turned off to be home for some interesting new systems training at the Library, but not before we had a photo call with a herd of sheep and sheep shearers.
Monica and I continued turning left to the farm shop and cafe near the A59 and met some Wanderers who had already climbed at least 5 mountains and ridden 100 miles. Onward right along the A 59 avoiding large speeding lorries and up to the Communication Centre at Forest moor, where
it seemed that all its communications systems had been blown down and were being replaced. The zoom passed Menwith 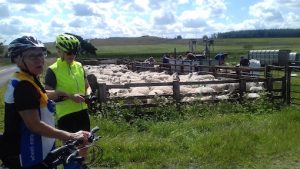 and down to Hampsthwaite was as glorious as usual and the hill up to Killinghall was as usual hilly and we met some more Wanderers who had not climbed 5 mountains or done 100 miles on their trek home.
We decided to pop in to see a fellow Poddler on our way home and had lovely biscuits and another coffee admiring the stunning garden and array of birds life in super sun. A quick trail down the Greenway which certainly was it its best and home for a pre tea snack. 27.23 miles recorded on the understandable, working, new ordometer.C.G.

I don’t quite seem to have got the hang of this ride leading as I didn’t start the ride with the group, finish the ride with it & didn’t lead for most of it either as not quick enough! Otherwise I was brilliant. By the time we assembled at Ripley we numbered 14 on an absolutely perfect morning. This was a re-run of the ride from some weeks ago & although this route seems to be being credited to me it is nothing new to Wheel Easy stalwarts except that most seem to remember the elements of it in the reverse direction. We all seem to agree however that this way gives the most glorious views, particularly up & down Nidderdale & I hope the photos do some justice to the claim. Had a great lunch stop at How Stean Gorge Café, food & service excellent. The only unfortunate side to the ride is the mileage before coffee! Perhaps an earlier start next time & take early coffee at Fountains or G & T’s. Impressive mileage for all today being about 55 miles from Harrogate & I even managed to get Steve to do 47+ from Ripley by sending him a long way round to fulfil his Brimham Rocks desire on way back
Thank you to everyone for their generous praise, enjoyment & company on a truly lovely day out where even the forecast afternoon cloud didn’t materialise. Easy this ride leading malarkey when so many in the group are so knowledgeable & gracious in their support, thanks again. Alan S 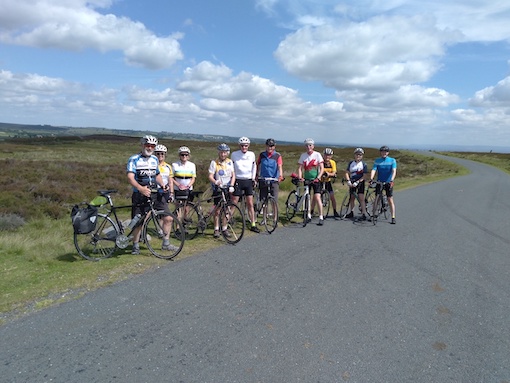 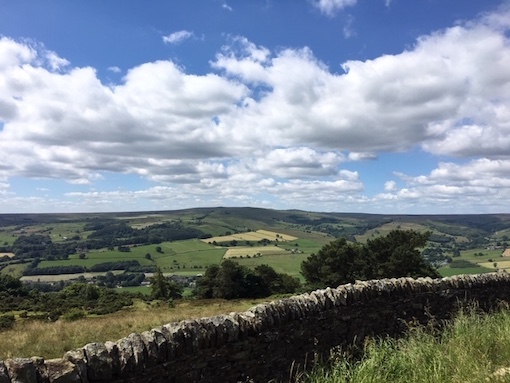 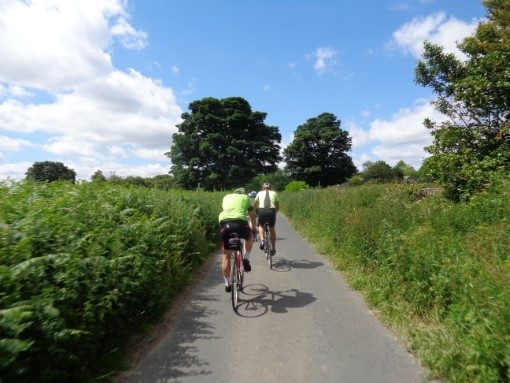 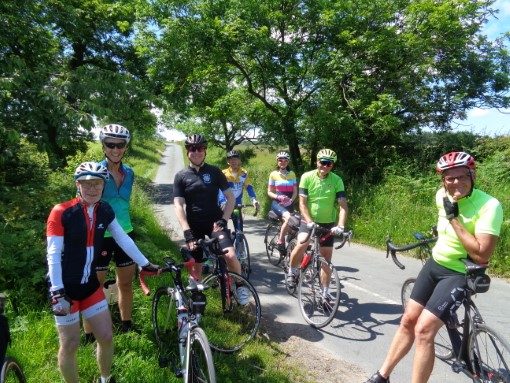 Liz F and her group of eager hill climbers sped off leaving 10 of us to have a more sedate ride following her suggested route We waved to Steve, Dave and Max who had formed a small breakaway, hoping to see them at Ripley church later. At Ripley it seemed as if all the cyclists in the area had assembled! As they all moved off, I realised we had collected 2 more, Dennis and John. Going  through Hollybank woods was quite an obstacle course as we met a tractor, a delivery van and many dog walkers. It was a beautiful day and from then on we had a lovely ride along the Nidd to Thornthwaite. Judith sailed up the ‘cote de Thornthwaite’ on her electric bike while the rest of us puffed and plodded up. Once on the Menwith Ridge, it was beautiful – ‘God’s own country’, today at least! Dennis and John left us at Menwith while we headed down rural lanes towards Kettlesing and then Hampsthwaite. Here we split into 2 groups, some drawn to Sophies while the rest of us did the final climb up Clint Bank and along to Ripley before allowing ourselves a coffee stop. On the way, much of the talk was of cakes. Sure enough, when we arrived we were spoilt for choice! Just as we were leaving, our 3′ breakaway Wanderers’ arrived! They, too, were ready for refreshments after going up to Brimham. A grand Yorkshire morning! Thanks to Charlie and Liz P for back marking. Alison N 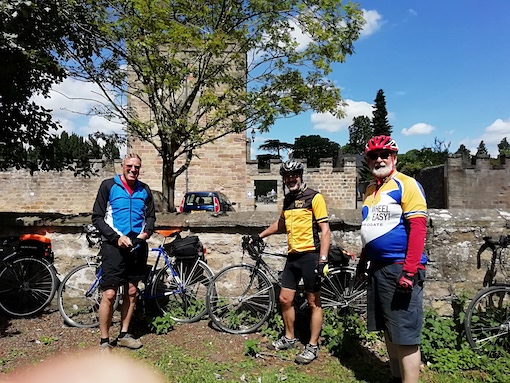 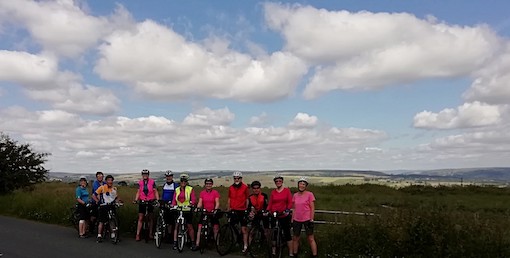 The Wednesday Wanderers gathered in large numbers at Hornbeam. The choice of Alison and ‘less hills’ took the majority, whilst Liz ‘more hills’ had nine chicks following her. Mike ‘Electric’ showing off his new bike was raring to go and test iton the hills. Thanks to Keith who became back marker, Charlie also joined us. Phil and Bev plus Yvonne was warned about Liz and hills but were up to the challenge. Johnathon, Peter and Colin knew what a treat they were in for despite a munity last time Liz attempted this ride. Due to the munity on ‘too many hills’ last time I took out some of the hills at the start and it was a flattish ride down the Greenway, through Hollybank Wood down to Birstwith and then Darley. Stopping at Darley Post Office, Keith and Charlie decided to carry on and this left eight chicks for refreshments. Good strategy to fuel them up for the hills were about to start. Just a gentle pull up Walker Lane, down Crake Lane and across the road on to Thornthwaite. Mike must have pressed the ‘booster’ button on his flash electric bike he shot up the hill like a rat out of a drain pipe. Mike said he had turned it down low, did we believe him!! Quite a tough pull up along the beautiful lane, stunning views, then the turn up to the Stonehouse Pub. This is where the munity was last time, but as it was warm and sunny my chicks decided to carry on the planned hilly route. A swoop down to Thurscross Reservoir over the dam then down to the A59 at Blubberhouses. Mike turned on his booster rockets, we all crawled up after him, then swooped down to Fewston Reservoir. Over the dam and on to Fewston Farm shop for refreshments. Colin bravely followed Liz back via Kettlesing, Hampsthwaite, Clint Bank then along the Greenway home. Peter took the other chicks back via Almscliff. A glorious sunny day with stunning views and a few hills. 35 miles up hill and down dale.    LizP 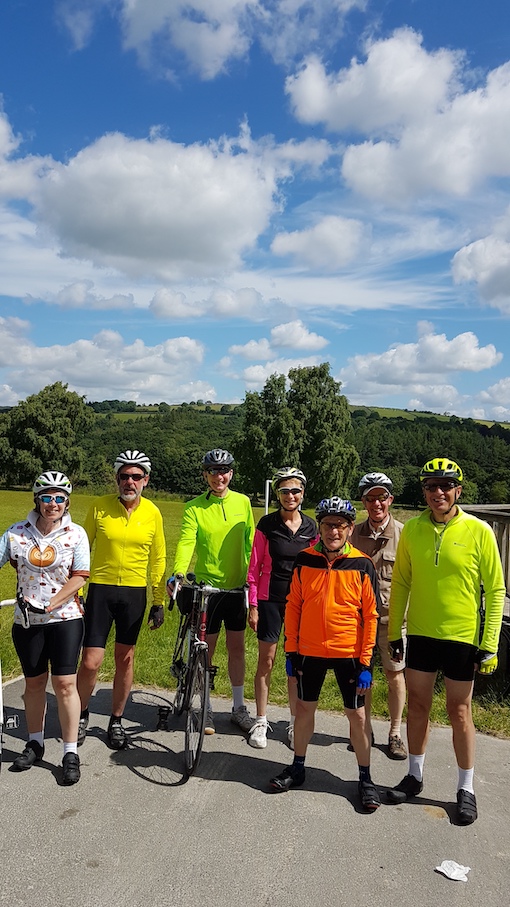 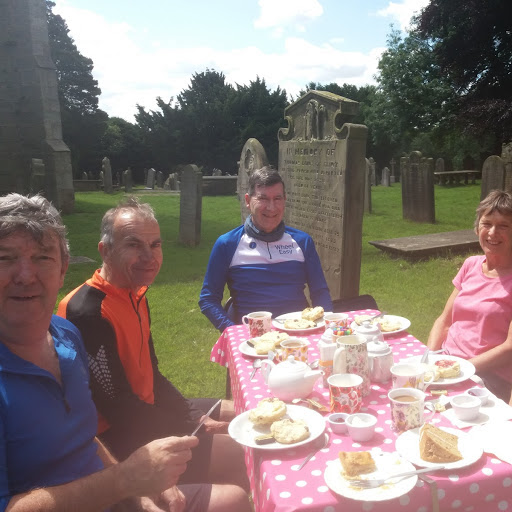