To say it was cold would be typical British understatement, it was as cold as possible without seeing ice on the road. 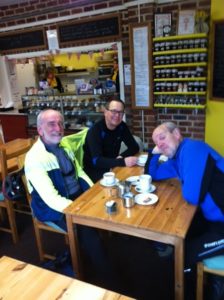 The EG`s long ride was starting from Hornbeam Park so we had a mix of A and B teamers at Low Bridge, ie Bill W, Dave P, Dave S, Nick, Norman and newcomer Paul on his Birdy folder.
(welcome to Wheel Easy and the EG`s Paul) with Dave Watson joining us later.
The destination chosen was Ripon and Spa Gardens cafe for HOT drinks and get our hands round a hot mug (no this is not a statement of violence towards a non cyclist).
There was no freewheel downhill challenge to Occaney, it was to cold to freewheel, some of us changed down to a low gear and pedalled like hell to see if we could get a boil on, but despite our multi layering this did`nt seem to happen.
It was warm in the cafe and our finger ends began to thaw, it has been known to be unable to take a helmet off because numb fingers could not work the catch.
Then it was back home via Fountains Abbey Deer Park, after the Tower Norman and Paul took a left to Markington the rest of us continued straight on to meet with them at Bishop Thornton crossroads, the two route are roughly equal in distance, however our climb up Watergate has an “arrow” on the road, the climb up Dole Bank does not.
Then in to Ripley to meet Gia and James and Wheel Easy Wanderers to enjoy a very pleasant ride home together in sunshine on that great cycle track “the Greenway” which owes a lot to Wheel Easy.
Dave P 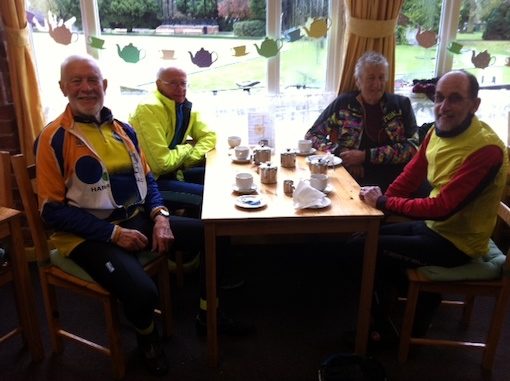 Upon assembling at Low Bridge, Knaresborough, it was apparent that there were at least 14 Wanderers – a little bit too large for one Group. After discussing with Alison, Mike, Allen and I decided to break away and go a little faster as Mike had to be back by about noon. Before we set off and as we were all together it seemed a perfect photo opportunity to try out my new selfie stick (made in China and exported here – how can they make a profit when it only cost £1.00?).

As we passed under the railway bridge at the end of Chain Lane, Mike/Allen suggested going the scenic way along Breary Flat Lane, past Bar Lane Nurseries. This was actually quite a long detour and the larger group of Wanderers had got ahead of us. We caught them up and overtook them at Farnham.

We then make good progress through Staveley, Minskip and Boroughbridge. On the way to Skelton on Ure we thought we’d go round the one way system in the Newby Hall Estate but on reaching the first cattle grid, we saw a sign stating that cyclists were not permitted! We turned round and rode into Skelton from the south. Mike turned off at the bridge just past the Race Course in Ripon to go back home via Littlethorpe. Allen and I decided that as it was raining lightly we’d go to Oliver’s in Ripon for a coffee and a bite to eat. We then decided not to follow the published route to Fountains but to go home via Littlethorpe and Bishop Monkton. An enjoyable flat ride with good company – about 35 miles.         Tim R 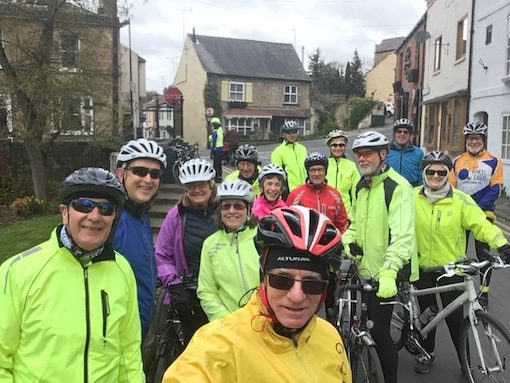 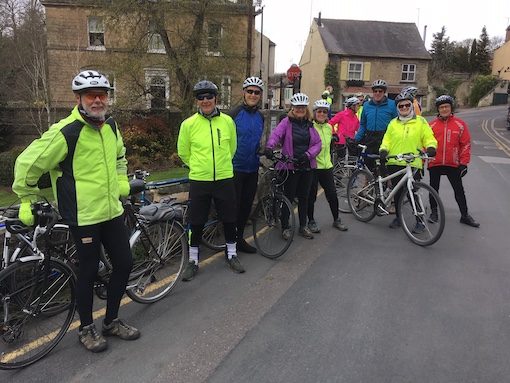 The forecast hadn’t been promising but the sun was shining when we met at Hornbeam. With some ‘regulars’ exploring Lancashire with Steve Wright, 10 of us set off for Low Bridge. Along Forest Moor Road we spotted Colin waiting in the starting blocks. Alan and Mike were waiting for us at Low Bridge along with the EGs. As Tim, Alan and Mike were our ‘fast’ group, we agreed to have a photo there and then. Several EGs volunteered to take it- but no!. Tim produced a selfie stick and — hey presto, – we had a photo!. After this achievement, Tim, Alan and Mike shot off. The rest of us followed at a pleasant pace to Staveley and Boroughbridge. Various options were suggested for cafes and routes. Everyone was keen to keep going to Littlethorpe and then onto Fountains. At Littlethorpe, Sir John left us, but everyone else felt they had the ‘legs” to go on to Fountains. We made our way through the edge of Ripon and onto Studley Royal. By then, if the wind hadn’t been chilly, it would definitely have been spring-like. The daffodils along the road to Studley were beautiful. The ride up the park was beautiful too.Several people commented on the dominant position of the Church at the top. At Hornbeam, I’d cheerfully said to the Wednesday group, ‘See you at Fountains’, not thinking we would. But, there they were! The new lay-out at Fountains, providing some long tables has really improved seating arrangements for groups. After coffee, it felt we were nearly home. Watergate Lane presented us with a couple of hills, before coasting down to Ripley. We welcomed Bev and Phil and were pleased to have Rebecca, a sometime Poddler, with us. All in all, a pleasant ride with much better weather than anticipated and lots of chat and banter. Thanks to Steve and Keith for keeping and eye out at the back. Alison N.l

Today’s Long Ride set off from Hornbeam with four riders intending to loop to Skipton. Led by Chris we cracked on at a decent pace through Pannal, Kirkby Overblow, 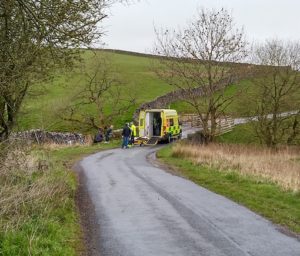 Dunkeswick, Otley and Askwith. The weather turned from cold to colder and was getting somewhat damp but despite rumblings from the backbenchers the leadership was determined to implement the plan. Skipton meant Skipton. So we pushed on passed Addingham and arrived at Bolton Abbey. After a comfort break at the lovely warm toilets at the junction with Green Lane we began the climb towards Skipton. Without going into too much detail, at this point Phil Pryor suffered a bad crash after skidding on a wet cattle grid. He was pretty banged up and we were fortunate a doctor was passing and stopped to assist. An ambulance was called and even Phil managed a chortle when the doctor revealed he was actually a gynaecologist. After the ambulance departed with Phil heading to Airedale Hospital we had little appetite for a lengthy ride so we returned to the excellent cafe back at the junction with the B6160. After warming up and taking on board some calories we headed back to Harrogate via Appletreewick and Stump Cross Caverns. After getting home, Graham was keen to drive back to the house where we had left Phil’s bike so it could be returned when Phil is out of hospital. Well done Graham. It goes without saying but best wishes and a quick recovery to Phil. 57.89 miles with 3,967 feet of climbing but that felt pretty irrelevant when one of our club gets hurt.  John

The gentleman in the picture was with his wife cycling Way of The Roses on their Bromptons. (His wife took the picture) Colette would describe their trip as hardcore, as were we to not demur as the sleet arrived as we cycled down Stripe Lane. The temptation to retreat via Burnt Yates was promptly denounced and with perfect timing as we cycled through Brimham Rocks the weather front disappeared (or we cycled away from it) and we were rewarded with a fine day for cycling. We introduced Jen and Colette to some new lanes, Sawley Moor Road and Low Gate Lane which brought us to Fountains in time for coffee and for us to meet up with the Wanderers who had arrived via another route. Home via Watergate Lane and the egg pick up. Colin only 2 were scrambled by the time I got home! 35 miles great wintry ride, nice to meet up with the EG’s at Ripley and well done to Colette for getting out on her bike and whizzing up those hills and welcome back to Jen. The joys of cycling with Wheel Easy. Gia 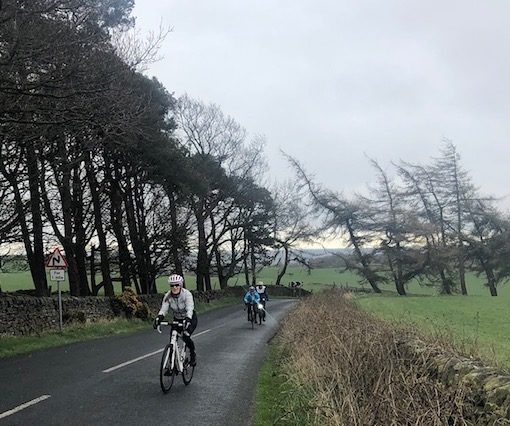 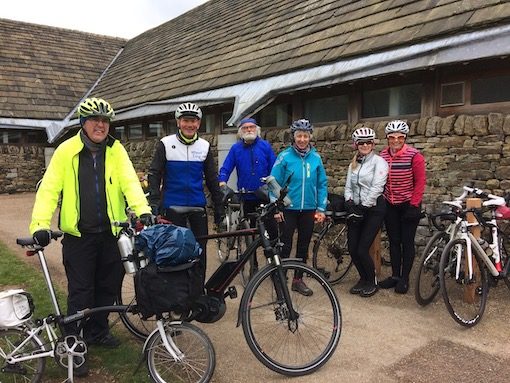 Re-run of the Gargrave Away Day

10 intrepid riders turned up at The Anchor at Gargrave for what we expected would be a great ride. And so it turned out. Many thanks to Mike Clark for designing the route and providing so much detail. It was useful to have 2 Garmins on this trip – thanks to regular conferring with Richard we kept to the route.

The forecast was for colder and wetter than Harrogate but by the morning of the ride the forecast had improved. We started in gentle sleet with a ride along the canal path  – watching a brave and lonely moorhen. We were to come back to the canal path twice more. Not exactly off road but not exactly on road either. The weather soon became acceptable and later we had sunshine.

This was a part of the world that I had driven through previously but to see it in its splendour was a joy. We saw the Abbey at Sawley, Pendle Hill and I particularly remember the villages of Downham and Chatburn. Plenty of hills and quiet roads made it a great day out as promised.

The group were well matched in terms of speed and ability and I enjoyed everyone’s company. Thank you all.

I have made a point to thank the Anchor (and we spent some money in there) so hopefully others will be welcome there in future. 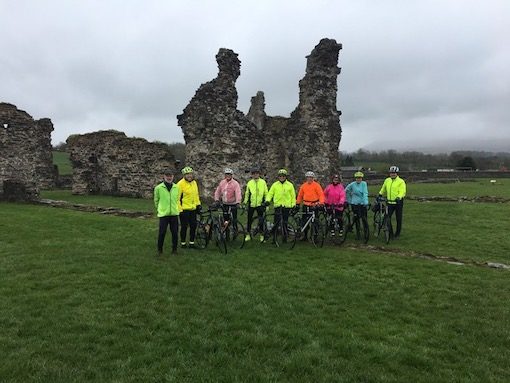 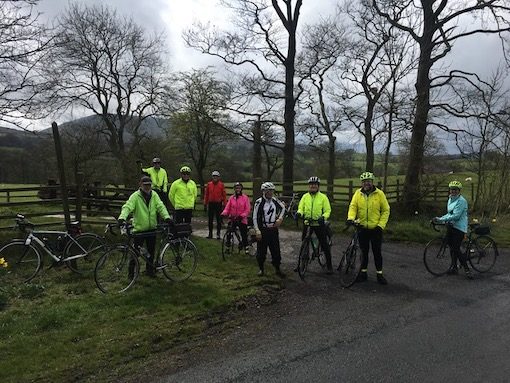 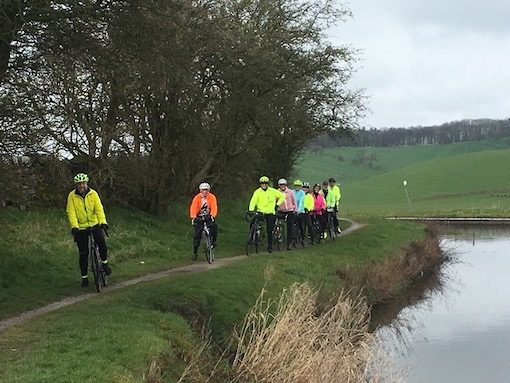