A modest but happy handful set off for Otley, myself, Al, Dave M, Richard and Steve (a new chap !).  Just after Kirkby Overblow we found Paul, communing with nature, so that made six.  On down to Otley, with a slight adjustment to the published route – via Pool rather than the Farnley loop; enough hills later.  On to the cafe in the kid’s playground on Farnley Lane to get ready for the push home.  The hills were indeed hilly, but we bested them and were soon up through Burn Bridge and on our way home. About 28 miles.   Brian 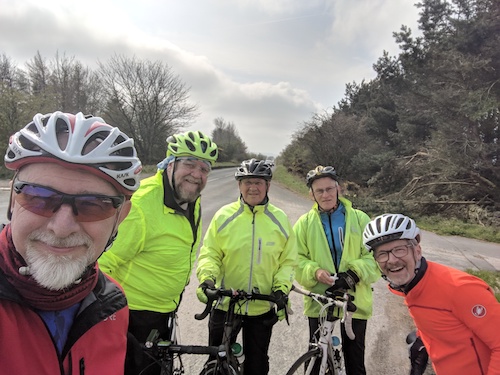 Initially six riders left Hornbeam to take part in the Long Ride. It was a bit of a chaotic start as the Medium Plus ride was on the same route out of Harrogate. We picked up an additional rider at Low Bridge, making seven in total. We made steady progress to Masham with a short stop at Galphay where a local resident engaged us in a conversation about the joys of cycling. Both cafes at Masham were full, probably due to there being a market in the square. We then headed for The Station café but they were only serving Sunday dinners. So, it was on to Thorpe Perow for refreshments. Whilst we were there a Mediums Plus group turned up. We started our return journey to Harrogate at quite a quick pace until we reached Ripon. From there a more sedate pace was the order of the day. At the Drover’s Crossroads we came across yet another Medium Plus group, these cyclists get everywhere. Peter J 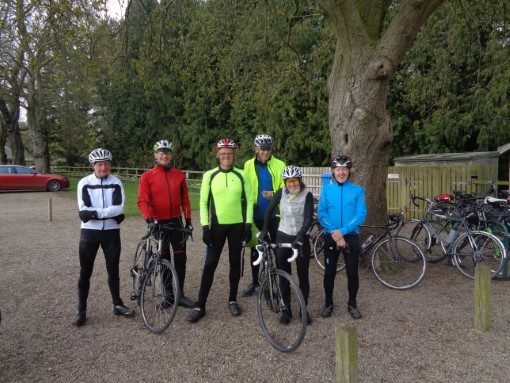 Having received several brilliant excuses for remaining in bed…..the dog ate my cycling shorts….I’ve lost my bike…i ve got a bone in my body……I m running the Grand National and the Marathon…..I m in a rescue boat at the boat race……i ve got to cycle the tour of Flanders….i didn’t think there would be many takers for a short ride.
Fifteen riders, however, wanted a short ride, despite the drizzle as we arrived at Hornbeam.  So they made their ways speedily up  to Little Almscliff and kindly waited for the straggler.  They continued to the first left on Penny Pot Lane, and waited.  They sped through Kettlesing and Tang taking a much easier turn than I knew towards Clint Bank.  They stormed on to Sophie s and waited, discussing  the lack of seats and what to do next. Luckily Jean and Bridget stepped in to decide on a coffee stop, as at this point I gave up leading from the back and headed home to win the Tour of Flanders, following Dennis, Peter and Sue T up out of Hampsthwaite back to Killinghall and Harrogate.
Thank you for putting up with my backwards style of leading….I hope you all had a lovely coffee and got home safely.  About 23 miles but quite honestly i have no idea as i can t work my new odometer yet. CG 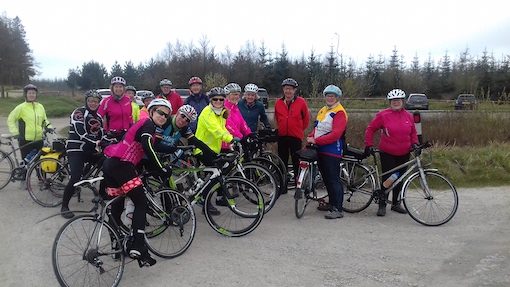 13 riders set ” briskly”  departed Hornbeam on a rather grey day, led by Helen. Following the prescribed route on flat, quiet roads we were able to chat and enjoy the scenery.  In Masham, where a market and an event was taking place, both cafes were jammed, so we opted for the brewery visitor centre , which was also incredibly busy.  To keep life simple, most people opted for cheese scones, to be then told that there were only 4 available so we were offered toasted tea cake as an inferior alternative. We ended up spending an hour at the visitor centre during which time they could have made more scones! It took them 45 minutes to bring out the 4 they had !! On leaving the cafe, we elected to take the direct route to Grewelthorpe, then passed through Ripon to Bishop Monkton where we shed 2 riders who carried on straight back to Knaresborough whilst the rest of us headed through Markington to the Drovers crossroads and back to Harrogate via the greenway. The grey day got better and the sun even put in an appearance after lunch. Lovely scenery and great company. 60  miles. Julie E. 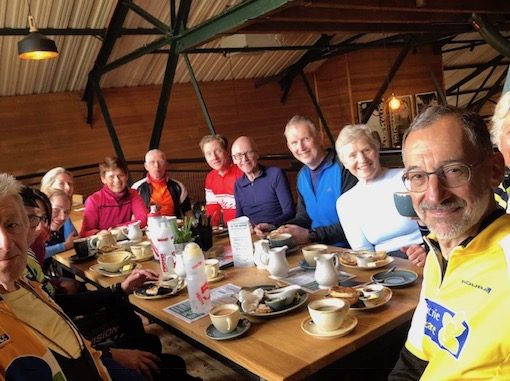 There was a lot of interest in the ride to Snape this morning. Once the faster boys and the brisker group had departed, eleven riders remained. Our first stop was at Low Bridge where Paul was waiting and Colin joined us at Farnham. We made good progress to Ripon, spurred on by the rather chilly weather. There were lots of daffodils to admire (although some past their best) along the route to Norton Conyers and Wath. At Snape we found another lovely golden host on the village green for a photo stop and the sun even made an appearance. Colin thought the Masham cafes would be very busy and suggested going to Thorpe Arboretum for our lunch stop. The sun was out in full splendour after our repast and suitably refreshed, we tackled the climb up Swinton hill. As we regrouped at the top, some sheep suddenly stampeded out of a field and on up our road to where James was waiting. They then turned back down the hill until, seeing me cycling up the road, they again came to a halt. The others called for me to walk back down and the sheep followed me. I have finally found my true vocation – as a shepherdess! The farmer, who had by then appeared, thanked us for our help and we were on our way again towards Grewelthorpe and Ripon. We lost Bob and the two Steves at this point but I’m sure, as capable chaps, they found their own way home. At Bishop Monkton, a decision was made to return via Markington. A sudden shower descended as we climbed up the hill towards the crossroads and we were all a bit wet by Ripley but soon dried off along the Greenway. Farewells were said after the Iron Bridge and all agreed it had been a very good ride with excellent company and plenty of amusing banter.        Monica.          About 61 miles 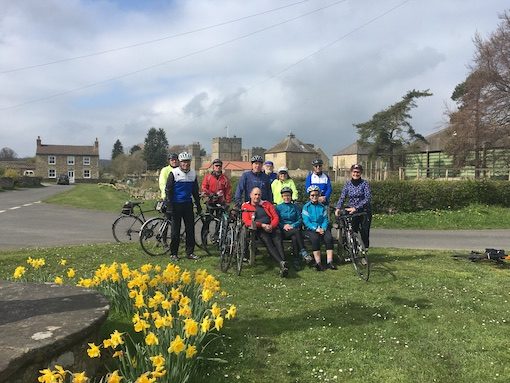 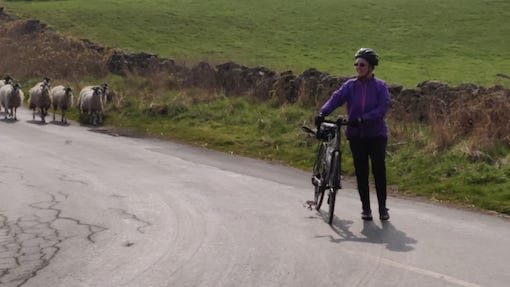