13 people set off for Beningbrough, 1 new person, Michael, on his recumbent cycle. Welcome to our group Michael.
Headed off to Arkendale, where Michael and Dennis decided to make their own way back, before leaving Dennis handed out Quality Street chocolates to everyone because it had been his birthday on Monday. Thank you Dennis. Hope you found your way back ok Michael. 11 set off for Beningbrough, arrived there in good time. Farm  Cafe had plenty of available seating and very good scones! Good service. Back over Aldwark Bridge where 3 more decided to leave. Brian volunteered to guide them back. Thank you Brian. Now down to 8, we continued on original route, weather stayed better than forecast, heading back to Hunsingore/Ribston/Spofforth/Follifoot. Roads were pretty quiet. Back up Showground Hill, all intact! Very enjoyable ride. 45 miles. Thanks to all. Mike W. 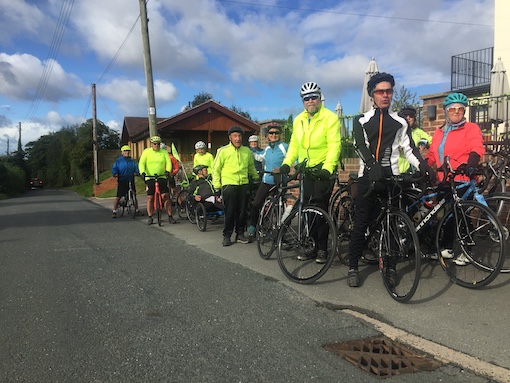 Ten set out from the Showground car park going via Burnbridge and Walton Head Lane where we got stuck behind a tractor cutting the hedge and leaving a trail of thorns in its path! Once we got to Kirkby Overblow we all checked our tyres for thorns – I removed two and Andy had a front wheel puncture. At this point Richard and Trefor went back to help John, who was trying to catch our Group up, mend his puncture at the entrance to Kirkby Overblow.

Zoe, Michelle, Andy, Mark, Helen, Janet, Yvonne and I carried on along the published route up Jewitt Lane, past Bramham and along Toulston Lane towards Tadcaster Grammar. It was here that Zoe noticed that my rear mudguard had (again) snapped in half. I took it off and discarded it – to be picked up later! Janet and Helen had decided to cut short the published route which would have taken us to Cawood, Riccall and up towards York by turning left after Stutton into Tadcaster. Everyone else in the Group agreed to do likewise thus saving about 22 miles in the process! Refreshments taken at the Lemon Tree in Tadcaster then a quick return via Wighill, the cycle path into Wetherby and back via North Deighton, Spofforth and Follifoot. Ended up doing about 39 miles and just over 2000 ft ascent – long enough given the blustery westerly winds – a most enjoyable ride with good company!       Tim R 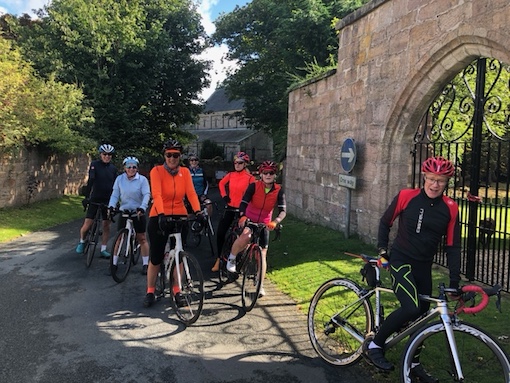 All jokes about having enough fuel were quietly dismissed as the eclectic/electric four, Kevin, James, Paul and Gia headed off towards Weardley Bank via Walton Head Lane. Beware the hedge cuttings along there. We think three riders fell victim to the thorns along here. Quick chat with the brisk ride on their way to Naburn who were looking out for John who had punctured. Helen, Keith and friend Teddy caught us up at Dunkeswick. Wheel Easy people everywhere.
Cafe stop at Bramhope in the garden at the deli where the only suggestion of rain passed by very quickly. A glorious bright sunny day to be out on the bikes, despite the volume of traffic. Back via Creskeld Lane, Pool, Castley and Almscliffe Crag. about 30 miles. Gia 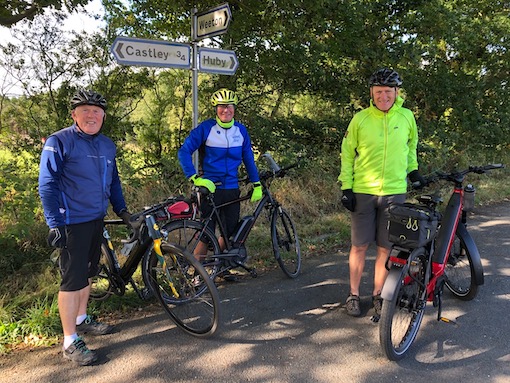 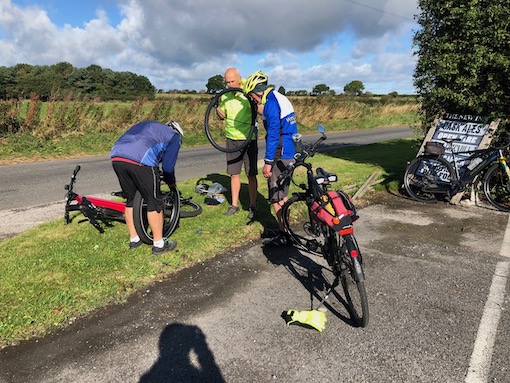