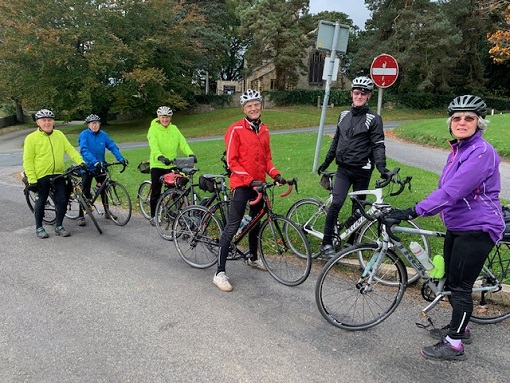 The intention was to ride towards Leeds via Weardley Bank and Eccup but a last minute change of route saw seven of us head towards the cafe at Pool via Kirkby Overblow, Dunkeswick, Weeton and Castley. We seemed to be cycling into the wind for much of the way. This is a route we used to do regularly in the early days of Wheel Easy and it’s been a while since we have cycled the route this way round. Although the cafe was busy  the service was quick and as it was mild we sat outside.  After coffee we headed home via Leathley feeling guilty that we had only cycled 25 miles. As Kevin said “ We must do more miles on a Wednesday” However, it was still an enjoyable morning in good company. Thanks James, Kevin, Monica, John, Charlie and Mark. Paul

Around 12 riders for the Brisk ride today, but only four opted to ride the calendar route. After a photograph to record the four Tim’s having all turned out on the same day, two Tims (T1 & T3), Mike and a guest cyclist, Jan, set off towards Dallow Moor via Bishop Monkton, Ripon , coffee at the ‘Olive Tree at Tates’ and Galphay. Headwind and light rain made for a challenging return, but overall it was an enjoyable ride. Around 47 miles and just under 3,000 ft of climb. Mike W 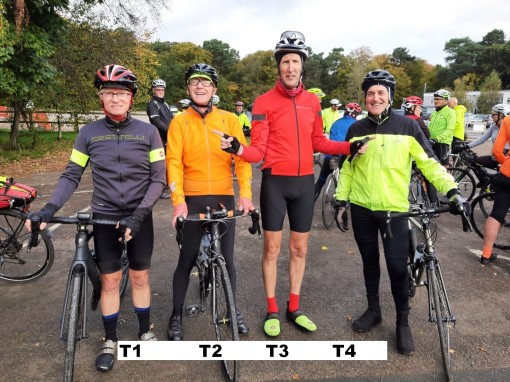 A cloudy blustery morning greeted the eight wanderers who decided to follow my ride across the Vale of York to Easingwold. We were hopeful of a tail wind as we departed the showground. Mike P was at Low Bridge thus swelling our numbers. Good progress was made through Farnham and across to Arkendale where Dennis left us . The ‘tail wind’ didn’t really materialise as we pushed on to Marton, Great Ouseburn and Aldwark. On to Alne where we spent some time admiring the pumpkins and chatting to the lady whose family had grown them. Into a very busy Easingwold for refreshments where we eventually found room at The Olive Branch. Quick and efficient service as we had the usual WE banter. As we left we knew we’d experience head winds but stopping at Raskelf to see if we could get Liz locked into the pinfold (which proved unsuccessful – sorry all) gave us a lift. Mike C went looking for a cafe that had an A frame out pointing away from our route. ‘Its alright I’ll catch you at Thornton Bridge’ he shouted. Mmmm!. Into Helperby and as we regrouped Mike sailed past missing the turn. Chased down by Mike P we now felt the head wind as we rode across to Boroughbridge Staveley Knaresborough and home. Rain held off. Wind was annoying but the ride and company was great. Thank you all. Thanks to Mike W as backmarker. 46 miles for me. Colin B 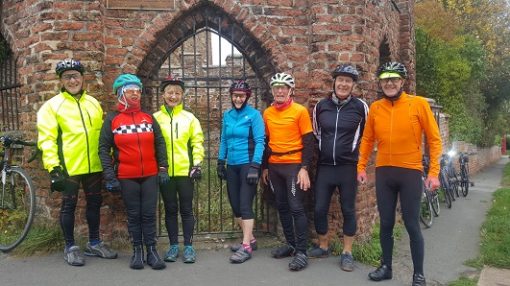 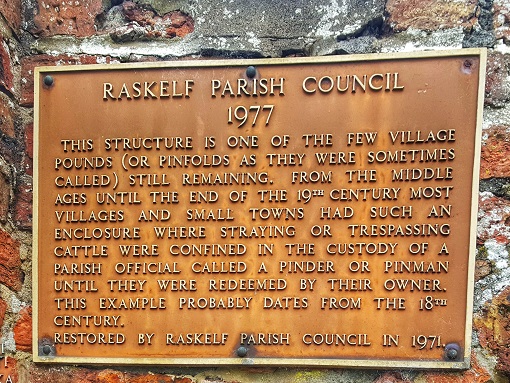 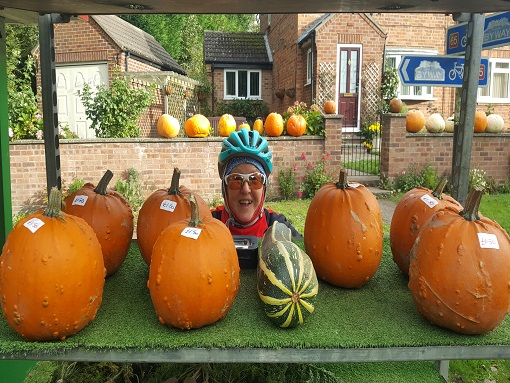 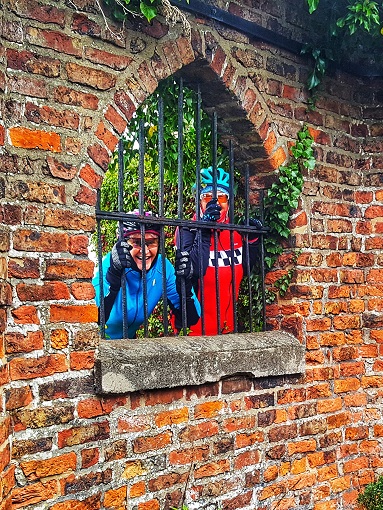 Several of us were unable to join that ride so we decided to go out yesterday. In the end, there were just 4 of us.

We had a great ride and, although we didn’t get soaked, we did get slightly damp. We talked about extending the 31 mile ride but the looming clouds helped us to decide to stick to the 31 mile route. The highlights were already mentioned in last week’s report – including Jervaulx Abbey and Cover Bridge.

Here are a couple of the best pictures. One is checking out the defibrillator at East Witton – useful to know! And you have to guess where the other one was taken.

Many thanks to Martin for planning the route and to Mike, Peter and Justin for your company. Steve W 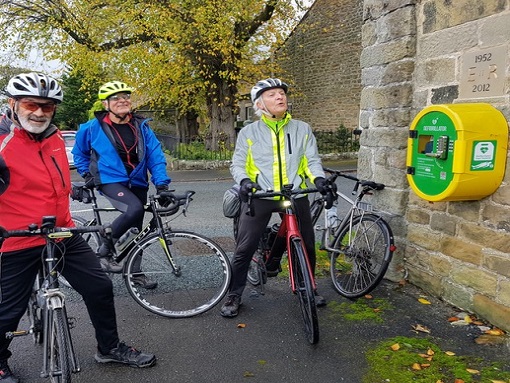 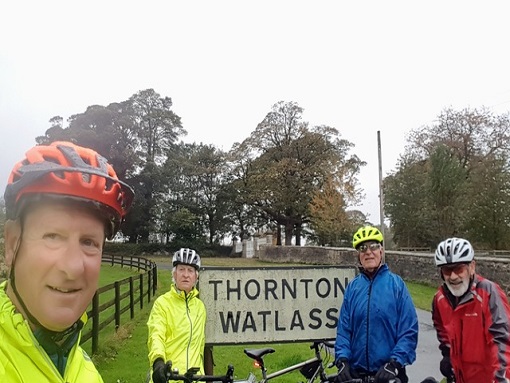