Saturday group left Hornbeam 09.00 and had decided on nice dry weather to do a hilly ride. So ride 113 Ilkley from the ride history was agreed upon.  Eight riders had turned up today including two guest riders Pamela from Harrogate and Paul from the Guilford area welcome.

Route went out past the Squinting Cat up to Timble. Then followed route down and up Little Snowden road surface there was good with only small amount of gravel in centre of road. Down Askwith bank to Ilkley cafe stop at New Brook Street Deli where we were joined by a late starter from Harrogate Mark C.

Then we set off for the Cow and Calf climb across the moor to Menston back via Otley- Castley- Weeton, before the last climb of the day through the Showground where we  said goodbye to Johnathon as he went to Knaresborough. 45miles with 3800ft of climbing at a 14.5mph pace. Grant 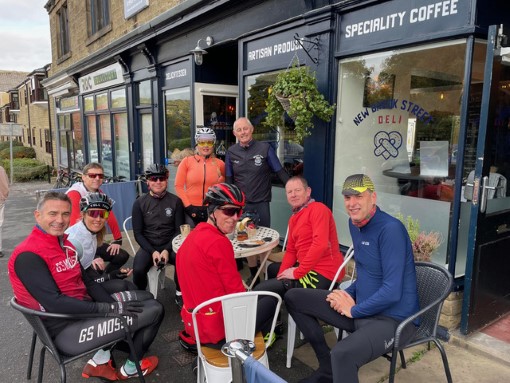 Not a promising day weather wise therefore only a few hardy souls out cycling. James took four for a slightly different route and I had four and myself for a medium meander. Down through the Stray and on to the Greenway which was fairly clean as the council had cut back the undergrowth from the path has it had been nearly overgrown. At Ripley my group set off up Hollybank, as the rain began to pitter patter down, the trees provided slight cover until we reach the top. Onwards to Birstwith and down to the toll bridge. Now it was getting very wet as we swam, front crawl up Stripe Lane and onto Brimham Rocks. Onwards to Sawley, along the leafy lane to turn towards Fountains. Swooping down Studley Royal the deer was in full rut and had drawn a few hardy walkers watching them rutting. At the bottom the brisk group flew past heading home as the rain lashed down. We stopped to watch a White Stag and a Red stag re-enact the Battle of the Roses, with a great clash of antlers they locked together. The red stag won as it chased off the white stag, at least we did not have to bury it under the car park!! On to Tates where James group were just finishing their lunch, as we dripped our way in, they had sensibly come direct. Delicious food and drink, as we discussed the bedroom antics of mature people now the flames of passion had extinguished after 50 years of wedded bliss. How when we wake up to kiss the wife it probably is the dog’s sloppy chops or ‘have you taken your table’, hot feet wriggling about or when the other person suddenly does not make any noise and you have to poke them to ensure they have not snuffed it. Oh joy. After lots of ribald jokes aimed at the male species from the three ladies, Steve and Colin had their opinions on the other half’s antics. Now drier we set off and just getting to the edge of Tates, the rain hammered down on the canopy and halted our progress as waited for it to ease, which it did not. Setting off the rain was pelting down and no sign of any clearer skies, we returned to Studley up the road past the deer, close to the road. Onwards up the hill, down to Ripley as the rain eased and back via the Greenway. A pleasant cycling day out rather wet but good company and laughs thanks to Alison, Helen, Colin and Steve. 40 miles who cares. Liz F

It was a cloudy autumnal day with rain at times, but our group of 6 enjoyed the mostly flat ride out towards Whixley via Wetherby, Walton and Cattal. Impending Hallowe’en celebrations were noted by the gallows in the photograph and possible consequences if one didn’t follow the rules set by the leader! However everyone had behaved very well and so refreshments were allowed and enjoyed in Tancred Farm shop. A  following wind helped to set a good pace on our return through the Dunsforths,  Boroughbridge,  Roecliffe and Knaresborough. Thanks to all for your good company.  45 miles  Monica 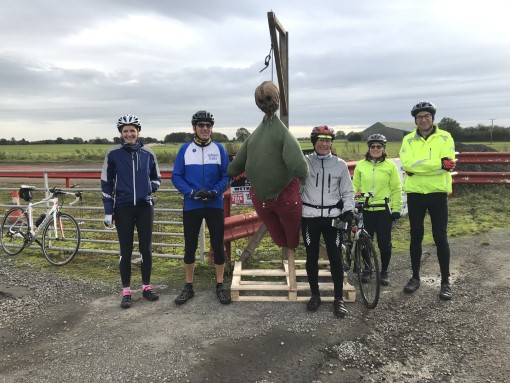 Eight for the ride today that was scheduled to go via Ripon to Thorpe Perrow & round back again but by the time we arrived at Ripon the cold rain was persistent. We legged it to Tates to see if conditions improved before going any further but by the time we emerged there was little enthusiasm to continue & so a brisk ride back to Harrogate via Fountains was completed instead. Thanks to Rob, Helen, Peter, Janet, Dennis, David & Andy for the company. 32 miles in total. Tall Tim.