There were many and varied reasons, from most of the poddlers, why a cycle ride would be impossible this morning…..on a plane; at the theatre; eating cake on a boat; hayfever x 2; having a new shoulder fitted, all of which made my qualms about cold grey damp weather seem pathetic.  So with determination in my bones I dragged down to Hornbeam hoping for a quiet ride up Heart Attack Hill and round a new loop I must have imagined.

Thankfully no one wanted to be lead from the rear at a very slow pace on a wild goose chase.  So off to  Burnbridge, up Heart AttackHill (without a heart attack), down and up to North Rigton, passed Big Almscliffe (where I got completely carried away by the view along the ridge that I forgot my main aim of the outing.. to find a different loop). Coming down into Stainburn I remembered why I never came back UP this route the other way.

At this point I gave up on a new route and headed back along the main A685 or 658 road avoiding the Temptations of the Farm shop straight back to Burnbridge and Harrogate….  noting that the A685 or whatever its called could easily take a bike path along side of it, as there is a rough path half the way from Pool to the Burnbridge turn off and a good path for a quarter of the way. EASY.

Thank you anyone who rejected a slow Poddle to nowhere lead from behind..30 kilometers plus (still can’t control the new now old odometer) of not sitting around wingeing about another cold grey June day. Caroline G 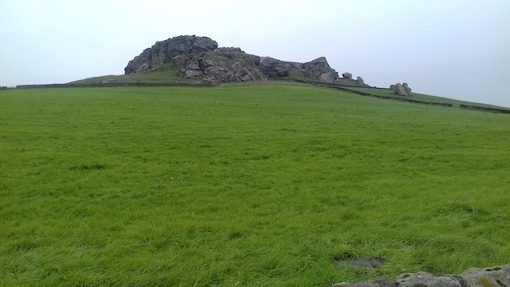 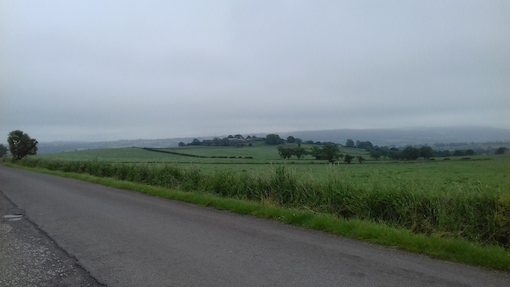 There appeared to be three groups starting out, but the four people led by me up the ramp and the “Zoe group” who went round by the traffic lights, amalgamated when we realised there were 11 of us.
Cool but nice twist on the local routes dropping down from Almscliffe Crag to Huby, then across to Weeton and Dunkeswick. On the way up to Kirkby Overblow, an offshoot group of six led by Tony decided to go the direct route up Kearby Cliff – they waited at the top to regroup which was a good photo opportunity.

Marwood left us at that point to wait for the second group with his better half to do their own thing, so the ten carried on the planned route. We went into the planned stop at the Wise Owl café (village hall ) in Boston Spa, but it was a stuffy internal room and fairly small, so we decided to press on to a short diversion to Thorpe Arch café.

After a good break and some excellent food, five of us pressed on after the remaining five decided they were going to have a second coffee. We used the cycle path to Wetherby, but decided to avoid the Spofforth track after the recent poor weather and diverted up to North Deighton. The 5 divided again, Mark, Margaret and Tony straight to Spofforth, Zoe the same but via Little Ribston; Mike and I straight home to Knaresborough. 40 miles and a few hills – 44 for me from home. A good route thanks Angela (now on as Route 252), Allen B. 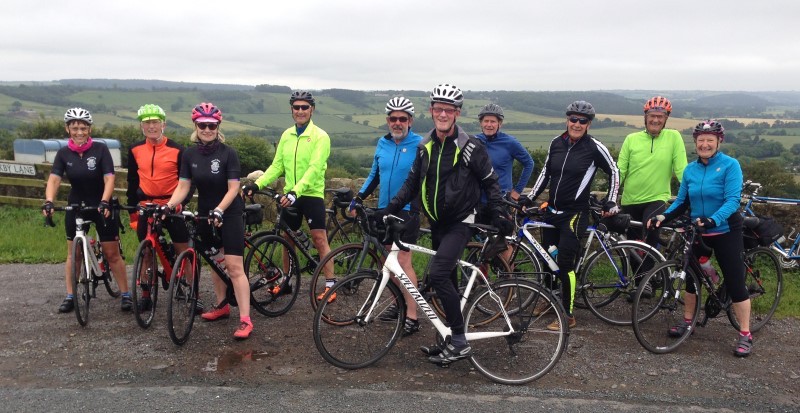 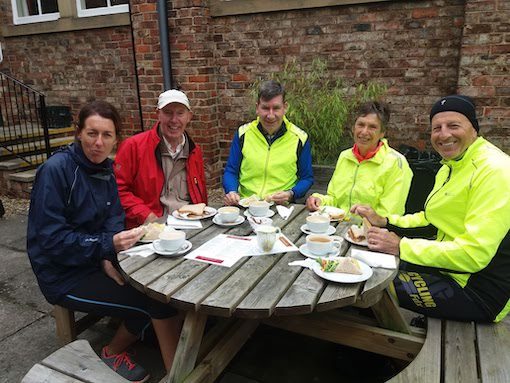 Many Wanderers ventured out on a rather grey day. We quickly split into four manageable groups and went on our way. The route was more hilly than it seemed in the car(!) but all pedalled up and down dale.

I led group Four. We almost caught group Three at North Rigton but they then disappeared into the gloom. Angela sprinted home to don more clothing as Flaming June it was not, to find half her group had abandoned ship at Sicklinghall. The remainder wandered on to the Wise Owl in Boston Spa to find group three enjoying a repast outside. They led us astray into the land of delicious cake as desert!

All agreed the cycle path from Wetherby to Spofforth was likely a quagmire so we went by road to Follifoot where I left my group to find their way back to Hornbeam. A varied ride with hopefully not too many hills! Angela R 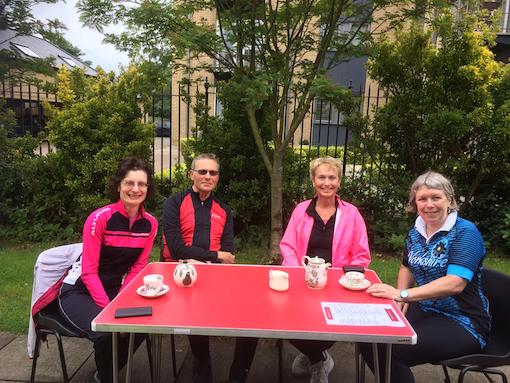 Eight of us set off with one tempted by a coffee at Ripon and another for a return just after Winksley. Nice to meet Yvonne and Helen Tate on an adventure run near Fountains, both looking very fit and happy.

Alan with local knowledge and with the absence of Colin and James guided us on a fabulous route through Winksley, Laverton, Grewelthorpe and up past the Himalayan Gardens to Ilton where we had a photo by what looks like a bus stop.

Through the pretty village and dropping down a steep hill and across a bridge thankfully not flooded we found The Bivouac Centre. They were not exactly thrilled and delighted to see us despite our call to alert them that six of us were arriving. But we had excellent food and after 20+ miles we were well overdue for our tea and coffee.

Skirting round the Swinton estate and over a ford with a footbridge we cycled to Wathersmarke and after some poor map reading by the leader and only a short detour we found the cut through road to the top of Nutwith Common. Here Maris wondered if the route home was all down hill and yes the ride to Ripon back through Grewelthorpe is an easy run and mostly down hill. Another cut through on Lark Lane to Bishopton and through the Deer Park, Watergate Road and home along the Greenway.

Some fabulous quiet country lanes, decent views although no sign of Roseberry Topping today. It was an adventure a bit like an away day. Thank you to all participants, for help with the route and for great company. Martin and Charlie, Alan, Kevin, Sue, Sarah and Maris. 56 miles Gia M 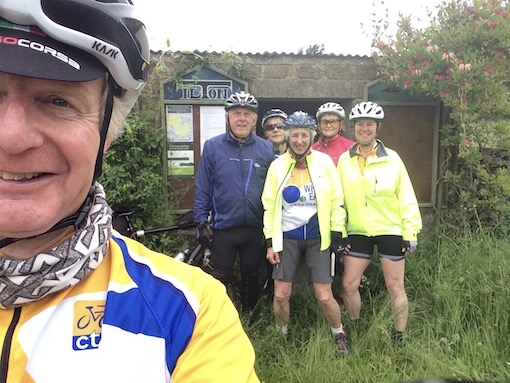 After four weeks away from the Wednesday Hornbeam gathering, it felt like a homecoming today.  It’s a pity the weather couldn’t raise a smile early on, but the prospects were good for a cunning little route – branded as a meander to Pateley and Fountains.

Four regulars were joined by Tall Tim and David R on leaving Hornbeam to make our way to Hampsthwaite via Knox.  Meeting Peter R and Graham W at Costcutter’s corner we reached our full complement of eight.  The route planner wanted to see if there were any lanes that were un-ridden by any of the group, which explains why we turned left at Costcutter and headed, after many a cunning turn and climb(!), to Kettlesing, Sleights Lane and Menwith base.  A drop into Thornthwaite was rewarded (!) with that often-underestimated uphill pull out again to Padside.  After an incline or two we were descending gingerly to Bewerley down past Yorke’s Folly.

A suggestion of a stop at Teacups was greeted with a Crie de Coeur: “they don’t do coffee!”  Ever-sensitive to the needs of the group, the stop was moved to Wilding’s and proved most welcoming – and the coffee looked and smelled real.

Leaving Wilding’s, the seriously uphill part of the ride began with a sneaky climb to the church and museum.  Soon we were making our way up Silver Hill and Wath Bank in a variety of ways.  On the way Tim realised that he’d joined the wrong group at Hornbeam, pointing out that this was a strange route to reach Swinton.  Error or not, Tim, you’re most welcome.

Re-grouping at the top the ride along the crest was welcome to say the least, as was the long un-scary descent to Laverton.  Usually, we expect some long-distance views, but today it was not to be.  Route cunning showed again after the right turn at Laverton and this lane seemed to be first for nearly all in the group.  On through Galphay (pronunciation an enigma, I understand) past the warning signs for tanks, assumed to be from the days of the now-closed barracks, we were soon moving through the Deer Park for a second stop at Fountains VC.

From here, the farewells began with the main group heading for Drovers via Markington and the Greenway back to Bilton in the best weather of the day, while taking the opportunity to check on the Himalayan Balsam crop which will be the target for next month’s Sustrans work session (9th July).  Not the longest ride of the day, I understand, but at 55 hilly miles (3700 ft) it was enough. Terry S

First priority of the day is to decide on the first cafe: Boroughbridge. Sorted!

Second priority is to decide how to get there. Nick suggested the A-Team (five of us) take a longer route via Arkendale and Marton-cum-Grafton, and meet the B-Team (three of them) there– good call, Nick! However the route was a little longer than expected owing to a serious accident closing the A168 near Marton, requiring us to double back and reroute.

Third priority is to decide over coffee our destination for lunch. Easingwold it was, as we haven’t been there for several weeks. Dave P1 of the B-Team joined us as far as Raskelf, where he and Dave W1 turned off for Aldwark and home. So four of us lunched at the Bakery in Easingwold where we decided on priority four – how do we get home from here? Huby, Sutton-on-the-Forest, Shipton, Beningbrough was agreed. Nick – still building up his fitness – came as far as Huby, leaving just three in the A-Team. Now the Waters’s outnumbered the Daves by a factor of 2 to 1 (Geoff and Eric Waters v Dave P2). I hope you’ve been following this so far – and that’s how it stayed for the rest of the ride.

Fifth and final priority for an EG ride? Yes, you guessed it – and I can confirm we did stop for tea at Beningbrough. So only three cafe stops this week. This Harlow Hillbilly completed 67 miles, whilst the two Knaresborough Knaves would have done about 57 miles. A good ride, cool at times, but thankfully dry. 14mph average. Eric W

The weather forecast said 0% chance of rain, no matter it still felt very damp, but we still had eight riders at Low Bridge, Boroughbridge beckoned us and away we went.

Bob and John R turned off to head for Markington and the Greenway, the rest headed for Boroughbridge in a circular route bar one who headed straight there, the objective being that all should arrive at roughly the same time, however road closures meant the “A” team were a little late.

After a few of us had two cups of coffee it was away towards Easingwold, the peloton setting the pace for the “B” teamer amongst them, but even then we still did not hang about.

At Raskelf a stop was made at the village pound (see photo and attempted group selfie photo) did we look lost waiting to be claimed ? There we had a text from Dave S who had replied to our text asking about his progress. He is making good progress but we really feel sorry for his exercise bike, the poor thing must dread him getting on it.

Dave P2, Eric, Geoff and Nick then headed for Easingwold, Dave P1 and Dave W1 turned off at Raskelf to head for Tholthorpe, Aldwark Bridge to take coffee and cake at the village Post Office in Great Ouseburn before heading for home in a dull, not to warm, but dry day. Dave P 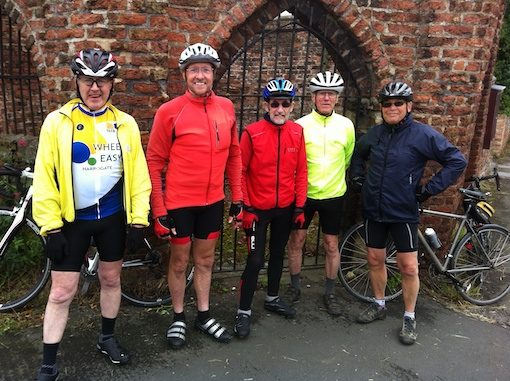 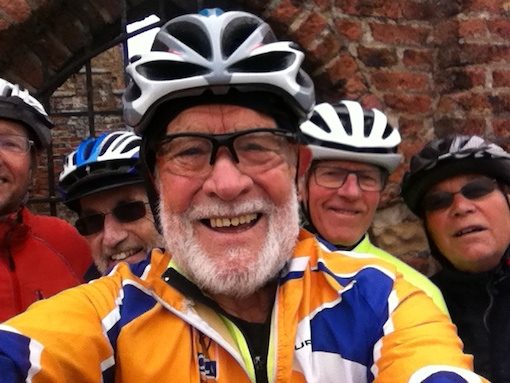