Three riders set off to do  a quick ride round the outskirts of Harrogate…..their main purpose was to remember how to ride a bike.  Despite the expected ice we had a glorious ride with stupendous views of clear  crisp vistas of hills, valleys, woodland, fields rather than the usual mist and murk. We followed a route from Hornbeam to Beckwithshaw, Penny Pot Lane towards Hampsthwaite to Killinghall and cafe Keogan.

After a pleasant coffee and chat, we basked in unusual sun as we rode gently down the Greenway noting a very high River Nidd and a lot of evidence of river overflow.

Not to many miles and back in time for lunch. Caroline G. 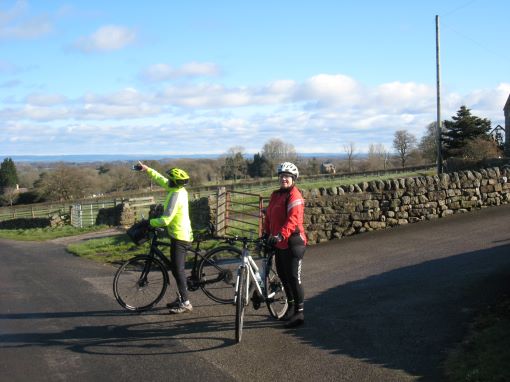 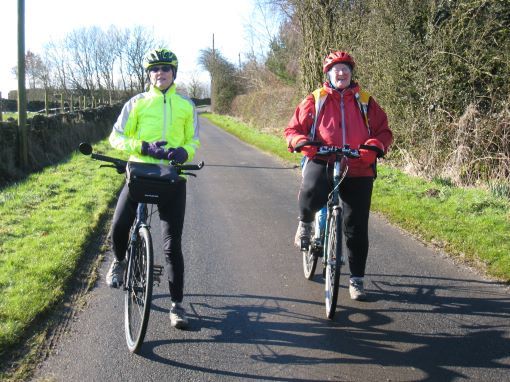 A group of 12 wanted to do today’s ride at a steadier pace and we split into two, with Mike Wills looking after the 1st group. The route was via Knaresborough which involved the busy main road as we wished to avoid Abbey Road in case it was icy. The photo was taken above Farnham thanks to our photographer Sur John.

At Bishop Monkton, Marwood, Judy and Liz left us for a shorter ride and we continued as one group through Ripon and up the Deer Park to Fountains for coffee. On the way we were joined by Colin B and Anne who had waited in vain for our arrival at Low Bridge. We hope for better communications in future!

The return was via Watergate Lane (no eggs left) Shaw Mills, Hampsthwaite and Knox after which I tried to lose Mike and co among the back alleys of Bilton! 35 miles on a lovely sunny day for riding. Liz P 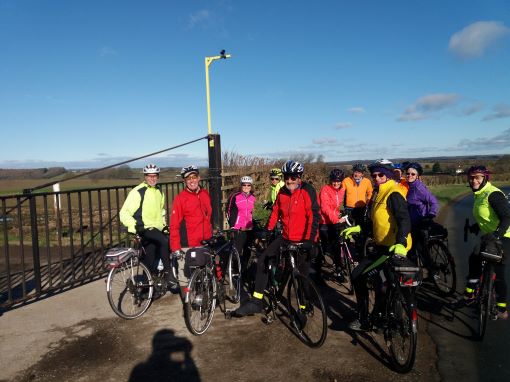 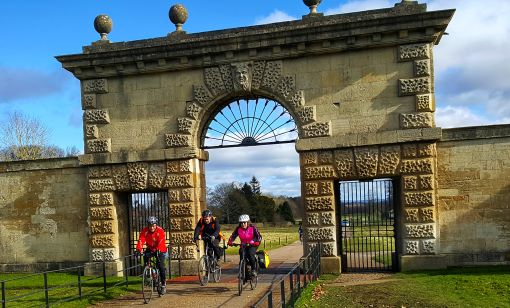 Route 31 today – seven (Top Tim, Vince, Roger, Colette, Mike, Mark and Tall Tim) going out via Knaresborough (where we picked up Allen at the road works) and through via Markington to Ripon. The roads were relatively “clean” compared with recent weeks and the sun shone for much of the time – nice. A quick stop at Fountains (photos) and then back via Drovers and Ripley. Decent weather, decorous company and an overall spiffing and enjoyable ride. 33 miles. Tall Tim. 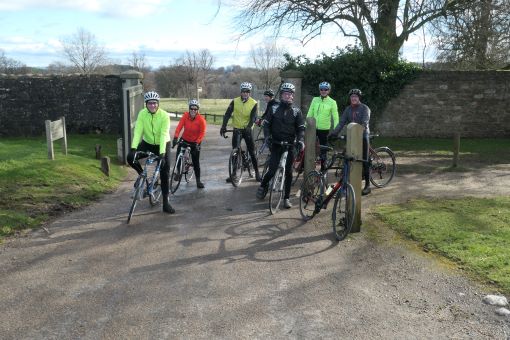 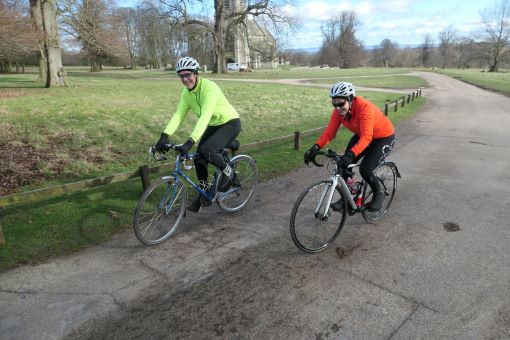 It would have a shame to be inside today and so the Wednesday Riders headed for Brimham, Fountains, Sawley and Ripon on a lovely bright, dry, but crisp morning and enjoyed one of the nicest days and rides we have had for some months now.

Despite early morning frost Gia,Yvonne, Maris and I found the Greenway to be ice free, although we did encounter a large pile of debris deposited by the recent flooding in the middle of the path at the low point by the bridge at Ripley which we safely negotiated, to join up with Martin, Colin and Alan at Ripley. The route was via Burnt Yates and as we made it to the rocks at Brimham it decidedly chillier than Hornbeam but very clear with great 360 degree views all round towards the powers stations in south Yorkshire, snow capped Whernside to the west and Teesside to the North. On days like this you would go a long way to get better long distance views!

Having said goodbye to Maris and Yvonne at Fountains we had just dropped to the bottom of the Deer Park when, horror of horrors, news came through from Kevin, who we were to meet in Olivers Pantry that there were no hot drinks because a burst water main in Ripon centre! After much telephoning, deliberation and regrouping we went back up through the Park and met Kevin at the Visitor Centre for a very welcome coffee/lunch stop. Kevin was looking well and will finish rehab this week and hopes to start back on his bike next week.

We returned to Ripley via Watergate Road and the Drovers and said goodbye to Alan. Returning up the Greenway, the pile of debris was still there so we attacked it with make shift shovels from the undergrowth (see photos) and managed to clear most of it. A lovely day out, making the most of the break in the recent run of bad weather and covering around 40 miles.  James G 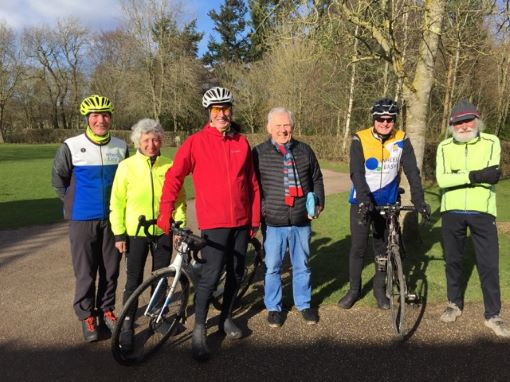 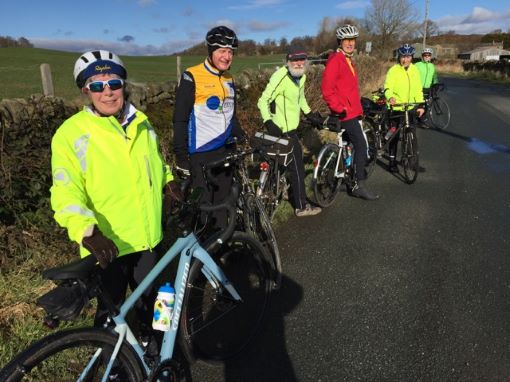 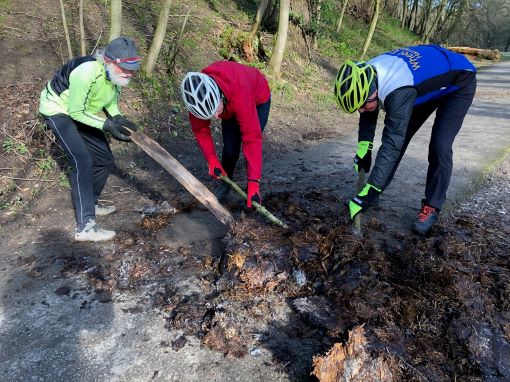 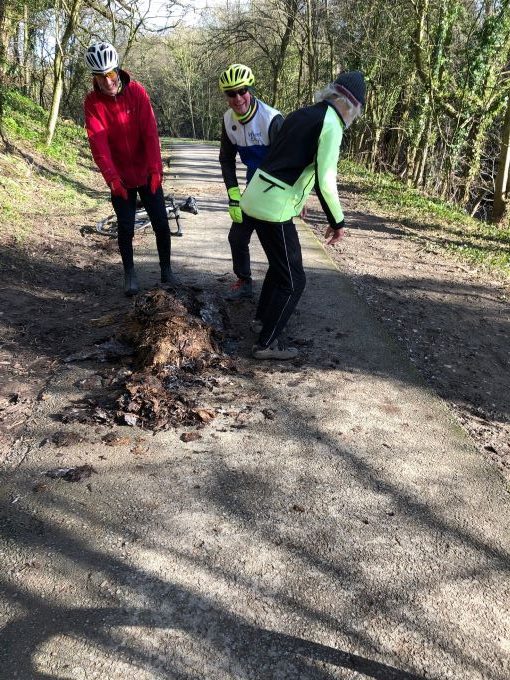 Today’s Long Ride was planned to reach Lotherton via Crag House Farm coffee shop outside Cookridge, to catch up with Angela in her recovery from a broken arm – an unwelcome Christmas present.

The route lived up to its billing as “hilly at the start”, with Weardley Bank proving its usual belligerent self clocking a 19% gradient.  The public conveniences behind the Fox and Hounds in Bramhope provided a comfort break before the coffee stop – a good move, as there is only one WC at the usually busy cafe.  Over coffee, Angela joined us as did Eric who had started after attending to a domestic matter.  Cheered by company, I hope, Angela looks forward to being back on the bike later next month.

In sunny but breezy conditions, our six-strong group headed east through north Leeds suburbs from Adel and York Gate Gardens to Slaid Hill and Scarcroft, having negotiated another sharp climb up Stairfoot Lane – one that few in the group remembered doing before.  Always happy to help!  After another two moderate climbs at Scarcroft and Thorner, the terrain settled down to a more benign profile across towards Aberford.

Ignoring a “Road Closed” sign on the approach road to Lotherton, thinking we could walk through if not ride, we were mistaken – the whole road was fully “Heras-ed” off about 100 yards from the entrance to Lotherton!  An unwelcome detour via Hook Moor followed before we finally got to our lunch stop in the Stables cafe.  And what lunches some of us had – pie and peas, no less.

Departing after 2.30, some tactical shortcuts came into play to take us to Tadcaster, where Geoff headed direct for home, although ironically he recorded the day’s top mileage. Bramham proved the group’s undoing as a cohesive unit, regrettably.  Two headed separately to the A1 parallel road, while the rest (3) followed the planned route to Boston Spa.  Here, with Lesley’s goal of 60 miles well in sight, we headed back to Knaresborough by the most direct route via Wetherby, the Deightons and Little Ribston.

Farewells followed at Abbey Road, leaving self to go in search of a comfort stop, a process that proved far from easy, as closing time for public toilets would appear to well before 5.00 pm.  Outrage! Overall, it had been an appreciated day out with sunshine, great views across to the North York Moors with landmarks such as the incinerator (!) and British Library picked out in the light as was the White Horse.  Mileages were solidly in the mid 60s and it’s still only February. Terry S

After the weird weather??? or normal for the future, the day looked, and was great for cycling, which begged the question why there was only seven of us at Low Bridge?

It was agreed that it would be nice to have the sun and some wind on our backs so Boroughbridge was our destination, away went the “A” team, comprising Dave Peatfield, Dave Watson, John R, and Nick who were to take a slightly longer route, the “B” team comprising Bill, Dave Preston and Norman headed straight there, the pace was very steady, the sun was shining, the wind was helpful, and the pedals were turning by themselves and the conversation had nothing to do with the interesting times we now live in. As we turned in to Morrisons the “A” team swept in behind us, perfect timing.

After caffeine and cake and resisting the desire to fall asleep in the comfy chairs (well it was for one of us) we went our separate ways.

Nick and Dave Preston headed for home, Nick made a good call by suggesting we returned via Lingerfields and Scriven, a beautiful village surrounding its village green and on a day like today difficult to imagine it is so close to the centre of Knaresborough. Dave P

Catching up with Dave P., Norman and Bill in Boroughbridge, we joined them for a convivial early morning break before continuing with our weekly cycling ventures. The majority of the EGs seemed reluctant to stretch their legs too far leaving only two members to head off north under, for very much a change following our recent wet weather, blue skies and bright sunshine.

Dave Peatfield and myself, Dave W., made our way on a adhoc route to anywhere but nowhere. Taking it in turns to push the wind, which was fairly light, we continued north without pause doing an about turn at Carthorpe having passed via Rainton, Melmerby and Kirklington. We continued to enjoy good weather and light westerly winds as we made our way back towards Ripon through Tanfield, enjoying the downhill swoop to The Sun Parlour in Spa Gardens reaching our goal for lunch a little later than usual at 2.20pm.

Refreshed, we pointed our way south back to Knaresborough, completing a worthy 54 miles as we arrived at ground zero round about 4.17pm complete with tiring legs. It was a fortunate ride insomuch the forecasted cloudy skies did not catch up with us. It was a shame more EGs were unable to join us on this occasion! Dave W