White Rabbits – it’s the 1st of March!  I am not sure what happened to Storm Ethel or Ellen, whichever it was but this weekend we seemed to have moved swiftly on to a boy storm beginning with J.  Storm Jorge (pronounced Hor-Hay with a strong Spanish accent) had been raging all night and was duly in evidence this morning, hence the smaller than usual turnout.  Keith and I were leaders of a select group of six including Alison, Liz F, Sur John and Peter B.  We were all of the view that, in the light of the current Corona Virus situation, the great outdoors was the safest place to be.  As well as advice about assiduous hand washing we have also been informed that good ventilation is important and today seemed particularly well ventilated, most notably on the run down to the B6451 and the final descent into Ripley.

We moved briskly to keep warm and were soon at the parting of the ways when Sur John left us at Hartwith Toll Bridge.  We all enjoyed the effort of Stripe Lane to keep feet and fingers warm and the reward of fabulous views towards the hills in the east and west where some snow remained.  At the cross roads to Brimham Rocks Peter B did manage to find a patch of snow from which he fashioned a large snowball.  In hindsight, he shouldn’t have thrown it at one of the ride leaders.  She was not amused and there will be consequences …………..

After turning right to Warsill we enjoyed the double pleasure of, not just a favourite descent, but one on smooth new tarmac (which apparently has Liz F’s footprint on it somewhere from an earlier visit).  Actually it was a triple pleasure because the sunshine and views remained stupendous.  All too soon we were in Ripley for a very convivial break although we did realise, to our horror, that as far as the NHS are concerned we were a group of “elderly” people and probably should not have been out at all!  “Too late” we mumbled through buttered scones and crumpets before saddling up for the final effort along the Greenway which was relatively quiet.  A most enjoyable day, although Keith did suffer a puncture as we crossed the Stray.  The culprit has been identified as a sharp sliver of glass which will be swiftly dealt with before our next grand day out.  The official mileage according to Garmin was 32. Helen & Keith T 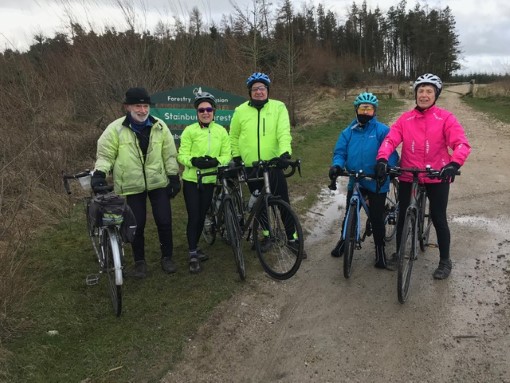 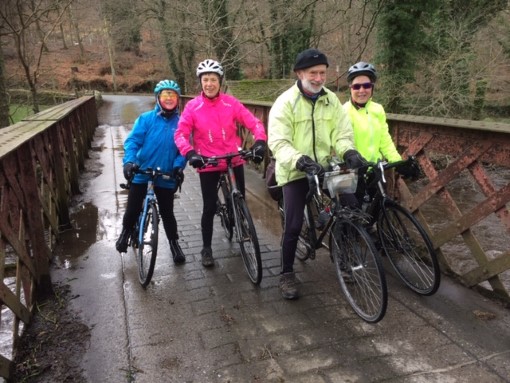 I’m not convinced that the allocation of given names to these extreme weather systems does anything to make them more endearing.  So, Jorge, George for my money, was equally as unwelcome this weekend as his former friends, Ciara and Dennis.  Following a good hour’s vacillation, valour triumphed over discretion and it was wing-flaps down, chocks away and off to Hornbeam.
There was a surprisingly large turn out and I ventured out with 12 in my group which inevitably became 6 at Bishop Thornton when we split along the usual gender-biased lines.  However, we soon re-gathered just outside Bishop Monkton as flooding on the road to Roecliffe formed a deep, watery barrier that only Alistair was prepared to tackle – commendation for bravery Alistair.  We then re-traced our route back to Bishop Monkton and decided a Boroughbridge coffee stop was probably far enough given the punishing wind and flagging mojo.  Fully revived, the journey back was unyielding, but my wingman, Tall Tim, did a heroic job on the front and is awarded today’s gong for services to group cycling.  Tough – yes.  Enjoyable – yes. Thanks everyone. Helen B 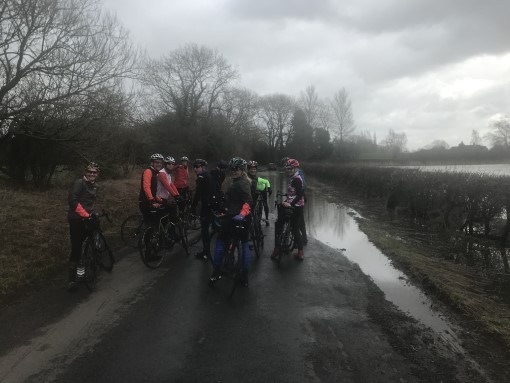 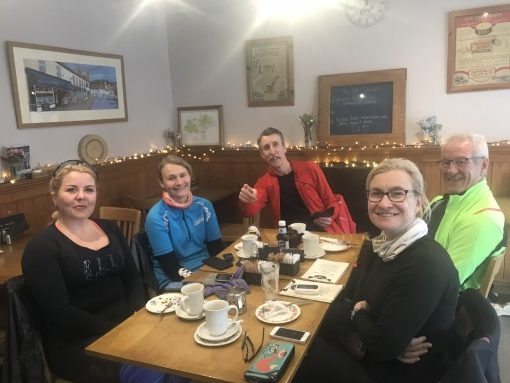 Strong winds were once again affecting the debate – to go or not to go. Having made it to Hornbeam Paul, James, Debby and myself decided to set off on the published route and modify it according to prevailing conditions. Progress was fine to Bishop Monkton via Knox, Shaw Mills, Bishop Thornton and Markington. Paul said farewell at the Drovers crossroads as the call of a Sunderland match at noon beckoned. On the outskirts of Bishop Monkton we came across a rather large impassable flooded area which made us review our plans. Ripon was on the agenda first, but the harsh stinging rain and wind in the short ride just back to the crossroads made us decide on the easier option of Knaresborough and a welcoming café.   James took a while to appear at our usual meeting point at Sandy bank as his chain had come off and was proving too difficult to sort out with the electrical apparel.  Happily he eventually managed to sort it out and joined Debby and me at the rather nice, warm and cosy Ugly Duckling café for some welcome refreshments. We managed about 29 miles and all were glad to have got out even if the conditions were somewhat bracing at times.  Monica 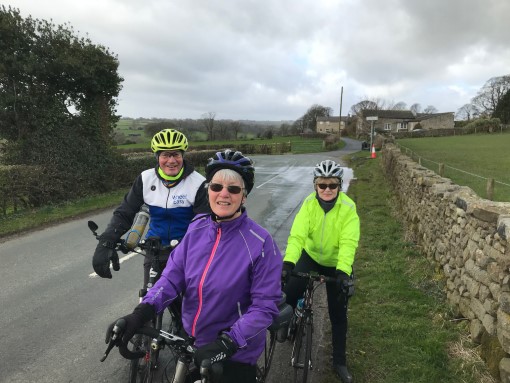 Despite Storm Jorge, twelve riders showed up for medium plus today, which soon split into two groups. After turning back in the face of a flooded road soon after Bishop Monkton, Grant, Paul B, Mark C, Tim, Dave W and I chain ganged it to Tancred Farm cafe where we were confronted with generous portions of beans and eggs. After moaning about last week’s beans on toast effort at a cafe in Boston Spa that shall remain nameless, I was very happy with Tancred Farm: they know how to feed cyclists! The ride back was in the face of some brutal headwinds. I was knackered after a good 52 mile ride. Many thanks to all and remember: no pain, no gain.  Michael I 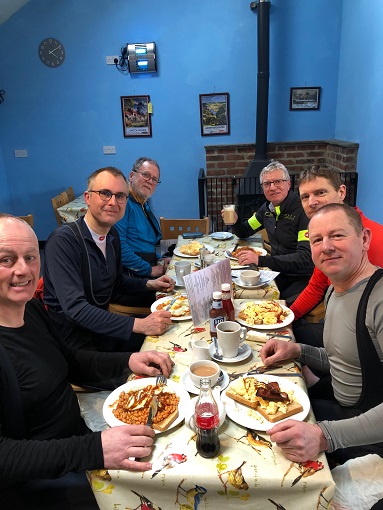