For some it had been a stormy night and the question was what will the roads be like, but no problems they dried off pretty quick.
We had a good turnout at Low Bridge, and it was decided Wetherby was to be our first cafe stop, so it was along the riverside in pleasant conversation with the Poddlers.
Coffee and conversation took place in “Market Place”, here a very pleasant elderly Lady came to talk to us, she was originally from Harrogate and that`s where she bought her bikes.
The Lady mentioned her age, and she did look good, we will not disclose this us being Gentlemen, but she was told we also had four riders over the age of eighty, who says octogenarians can`t flirt.
Eric took a group towards home, Norman took a group to Thorpe Arch, and Dave Preston, Dave Watson, Dave Wilson and Geoff headed for Wighill and Askham Richard and the Grange cafe, where we spent rather a long time due to the delay in getting our cooked food order, but this kept us out of the sun while it was at its hottest.
From Askham Richard to the B6164 the road had been resurfaced, the tar being soft, if there was little clearance between tyre and frame/mudguard things got gritty, Geoff actually removed seven bits of grit stuck to his front wheel.
A break was taken in Tockwith were the inside of the post office was like an ice cavern compared to the outside.
The pace had been between 8 to 11 mph on the flat, which helped Dave Preston and Dave Watson, we did not burn up or boil up and the energy conservation was good.
We had an excellent ride and a good mileage in perhaps difficult condition, many thank to Dave Wilson and Geoff for their help from the other two Dave`s.  DaveP1 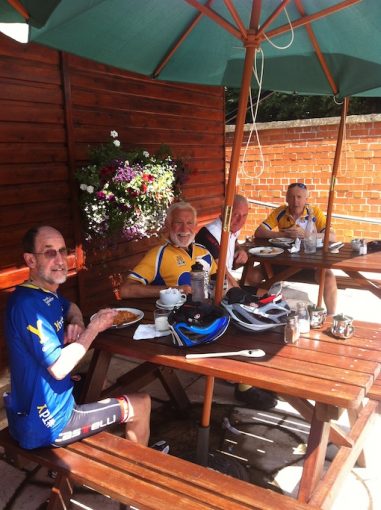 Please pass on my heartfelt thanks to Chris.

He volunteered to be back marker of the Wednesday Wanderers, but ended up being leader to a select group of 2, as I dawdled, slothfully back to Harrogate. A great Wheel Easy piece of leading.
Very many thanks,        Sarah

Two groups of wanderers departed Hornbeam in near perfect cycling weather following the overnight storms. A group of 11 riding at steady pace followed by 6 more leisurely riders led by Chris enjoyed the route to Linton via Kirby Overblow and Sicklinghall where the leading group took a breather for a photo shot.

A climb up Jewitt Lane and a turn onto the rarely travelled Compton Lane to East Rigton offered glorious views through gaps in the hedgerow. At the junction towards Thorner two of the pack bolted down the steep hill towards Bardsey and needed to be retrieved by the back marker. Nevermind, the group were soon reunited as Jane’s flat tyre caused a general pause while the tube was replaced.

Progressing towards Bramham we met Chris with two of his group. Others having already departed to Wetherby. By the time all the coffees, scones, and cakes had been ordered at Thorpe Arch, the full complement of Wanderers were reunited. From the coffee stop the route through Walton and Cowthorpe took us to Little Ribston where this leader departed to Knaresborough, leaving others to find their way back to Harrogate.

Another splendid Wheel Easy Wanders Wednesday ride. Thanks for the enjoyable company throughout the 38 miles.      Mike 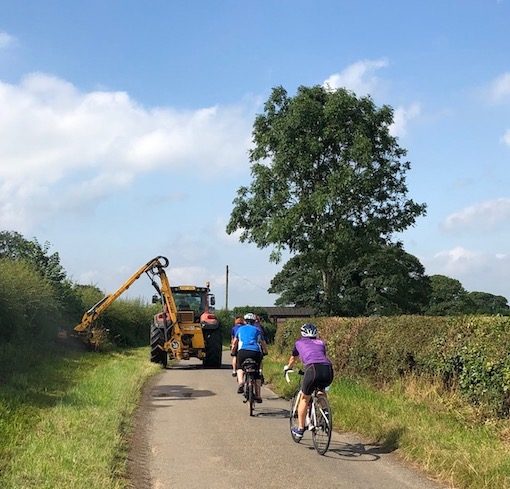 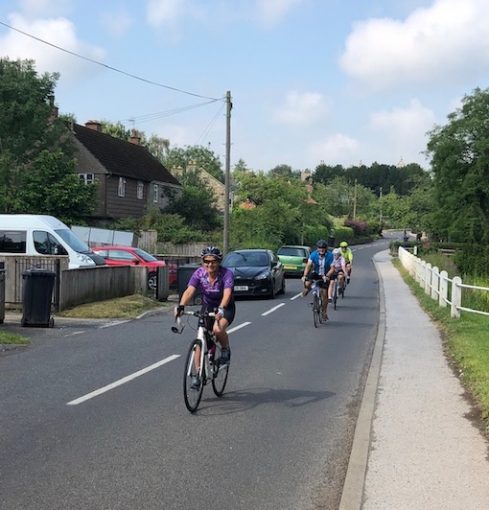 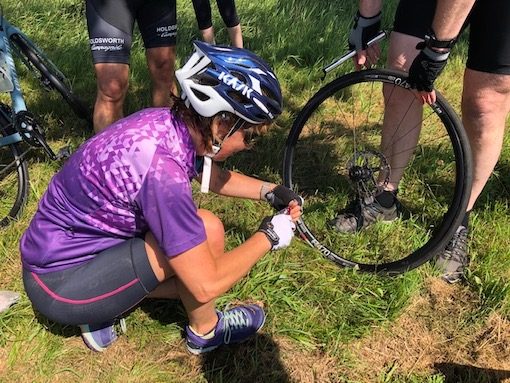 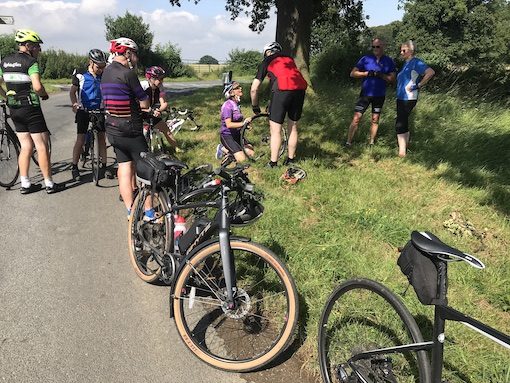 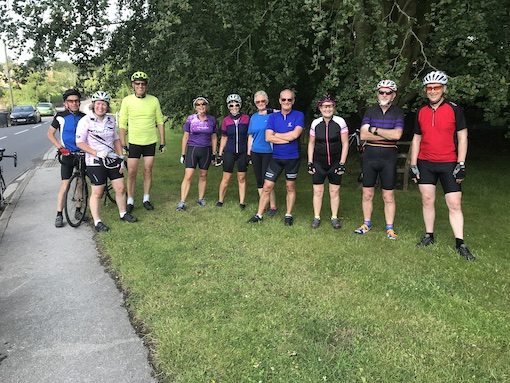 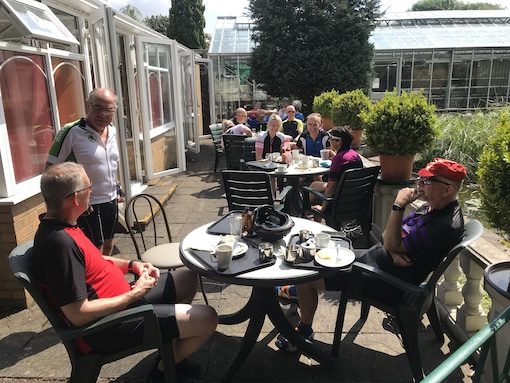 Not many takers for a longer ride from Hornbeam, only three, Martin, Dave R & Jill, for destination Masham. A puncture before we even got out of Harrogate caused a short delay but were soon on our way to Ripley, past Fountains & through Winksley to Kirkby Malzeard, Grewelthorpe & Masham for an early lunch stop at Johnny Baghdads. Here the group split with Dave heading for the climb over to Lofthouse while Jill & Martin took the flatter route home through Snape & Ripon. A very relaxed ride in good company on a hot day, around 55 miles. Sorry we forgot to take any photos.   Jill.

After the thunder and lightning of last night, this morning was warm and  humid as we assembled in the cafe and car park of Asda in Sandal, Wakefield on our July Away Day. Group A which I was jointly leading with Nick, who had a major hand in devising this route, was an all male affair of 11 – three Tims, Terry, David, Vince, Bob, Nick, Justin, John and Richard.

After leaving Asda we headed in a south westerly direction – Bob had a mechanical when his chain link came off – this was replaced with relative ease and off we went. The Windmills Coffee shop and Garden Centre which was located at the highest part of the ride never seemed to get any nearer as each time someone asked “are we there yet?” the reply was always that it was 5 miles away! After coffee and something to eat, we ventured up to a nearby view point at Spicer Hill with 360 views – a great photo opportunity.

A little further on at Wortley Top Forge (Historic 17th century former forge and ironworks) Nick went over to a lady gardener by the side of the road who embraced him and gave him a kiss. The rest of us wondered whether she was going do likewise and whether we should form an orderly queue…it turned out that is was his mother and the rendezvous has been pre-arranged!

Temperatures sored in the afternoon and our lunch stop at Cowthorne was much appreciated especially the delightful gardens at the rear where we all sat in the shade. Because most of us had eaten lunch at the earlier coffee stop, this became a tea stop with lots of delicious cake and ice cream. Only 8 miles to go to the finish over Woolley Edge. Bob, you must replace your partly see through shorts, I didn’t manage to get a shot from the rear which was verging on obscene! All in all a great route in an area none of us except Nick knew, with good company. About 40 miles with just over 3700 ft of ascent.    Tim R 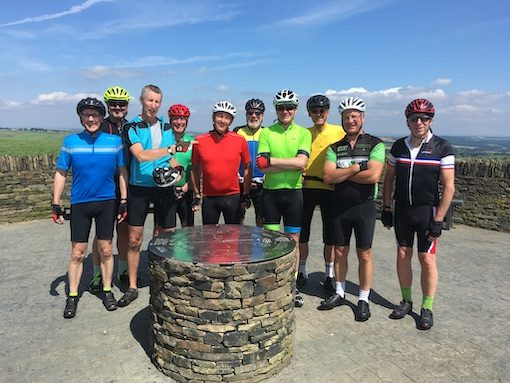 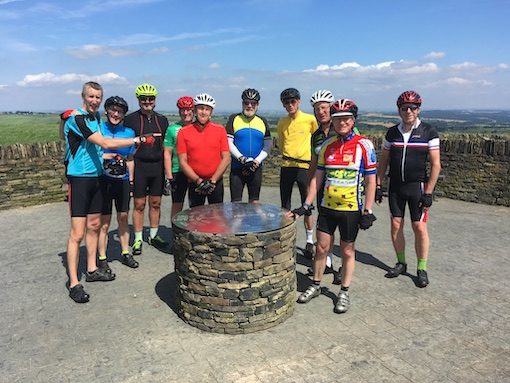 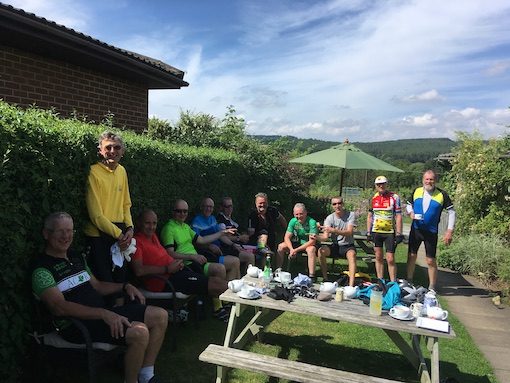 Todays Awayday ride saw a rare foray into West Yorkshire on what was expected to be a very hot day. James and Nick had planned an excellent route to show of the Moors around the Wakefield/Barnsley area.

However, before we started we thought we had slipped into a parallel EG’s world as the group were having coffee in the coffee shop of a National Supermarket chain!

Having got over that the groups assembled for the off. We welcomed back James Grimshaw and John Hackett from their various medical interventions and we set off with dull skies over head.

We spent the first few miles riding through the outskirts of the urban environs but once we turned onto the country roads we encountered some serious climbing, superb views,a hot sun and very little traffic.

We headed up towards the ‘windmills’ on New Royd which was a coffee stop after 15 miles. We made steady progress and enjoyed great views but the miles felt harder with the climbing.

We arrived at the Garden centre stop where the first group were still waiting for food and service seemed slow. However it was tasty and after a longer than usual stop we made our way up to the view point which gave us great 360 degree views over the Valleys.

James said it was a ‘lumpy’ ride from now on – and that was the case! We seemed to be either climbing or descending- very few flat bits in between but we went through some great villages and lovely countryside and that made up for the effort we were putting in.

After re fuelling we set off back to the starting point and made our way through the outskirts of the urban area again an encountered a few more ‘lumps’. The highlight for some of the group was when a group of youngsters shouted “Here come some sexy boys and girls” as we cycled past them- and not a can or any other substance in sight!

Lifted by this compliment and a mostly downhill ride we went through Newmiller Dam and back into Sandal after a thoroughly enjoyable days ride. 40 miles and 1200m climbing on a very warm day. Everyone was tired but had thoroughly enjoyed riding in a new area.

West Yorkshire proved a hit for the Awayday programme and we just need to persuade Martin Weeks to come along next year for it to be judged a complete success! 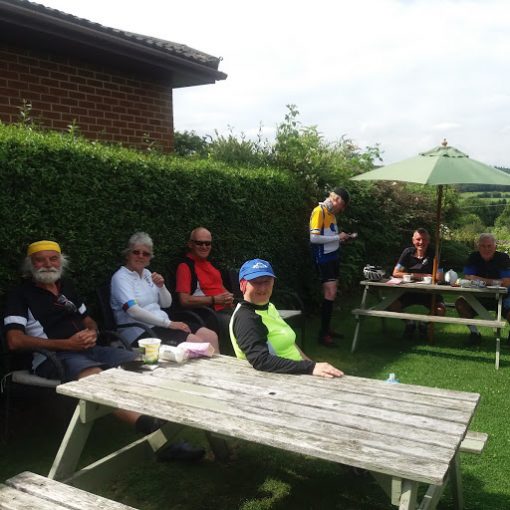 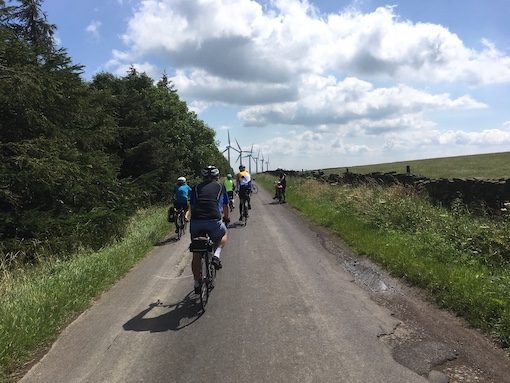 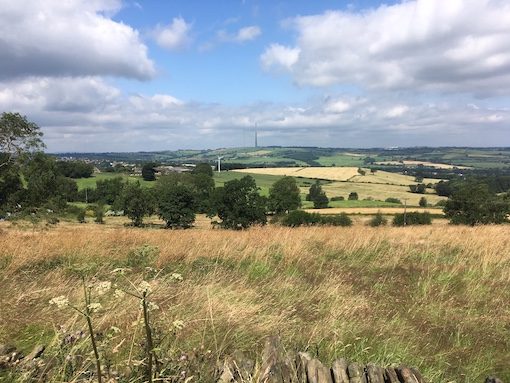 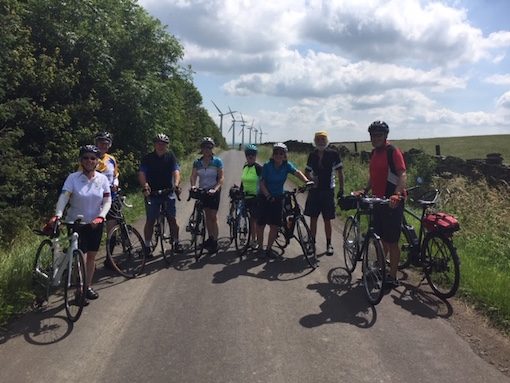 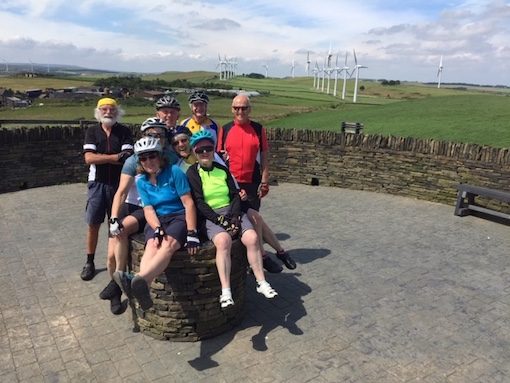 From the very select gathering of cyclists at Hornbeam, five Poddlers left via the Showground bound for the highways and byways of Forest Moor, Abbey Road, Scriven, Lingerfield, Scotton, Brearton and, joy of joys, the ladies of Ripley Church! The predicted temperatures were not as fearsome as expected and a steady pace was maintained throughout. We encountered the EG’s (or as Dave P said the VEG s) at Low Bridge and Abbey Rd – nothing wrong with Dave’s mathematical acuity as he calculated the temperature in France in “old money”.  Conversation was lively and was an excellent opportunity to catch up with family news, holidays and events. Paula’s amazing bike was proved of great interest to Surjon who discussed  gear ratios – I think that was it.  Politics with all of today’s implications received no mention!

Dennis and Surj did not participate in the fare offered by the ladies of Ripley but Paula and I fell on the cheese scones which were a triumph. Jane joined us in the churchyard  tucking into one of those famous ice creams. There were lots of walkers having cake and coffee . We had recommended that some of them sample the delights and surroundings. Lingering too long was not possible so the remaining trio headed along the Greenway . We met Gia and Malcolm on the metal bridge. Their excursion to Suffolk had proved a great success and they both looked very well as they cycled off to Sophie’s.
Paula and I assisted Jane in returning her bike to Caroline’s garage. With an average height of 5’2″ between us, we managed to hold the door up while Jane did necessary security manoeuvres within! The Grahams probably have an average 5′ 10″ !!  Thank you to the Poddler participants – all good fun.         Sue Downes 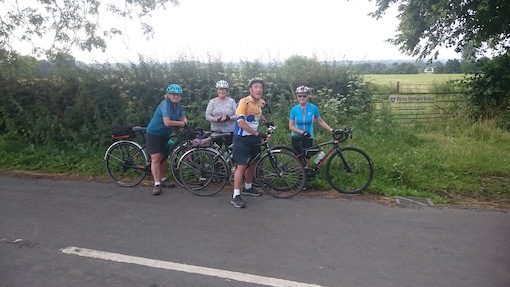