Having set off from home wondering whether there would be any takers for the medium ride today I was pleasantly surprised to count 16 riders at Hornbeam and two more at Low Bridge keen to do the Arkendale-Whixley-Walshford route.  Good to see Dave Siswick back riding with Wheel Easy and offering to back mark. This together with considerate spacing and skilful cycling helped manage this large group out of the urban area and in fact for the whole ride incident free. We refreshed together at Tancred Farm Cafe (see photos) and luckily there were few other customers so cafe shock was avoided this time. At Whixley two riders became detached dealing with a mechanical and at Little Ribston another two split for Knaresborough, leaving the remainder to tackle the hilly return to Harrogate. Thanks everyone for an enjoyable 33 miles at an average 12.5mph.  Tim 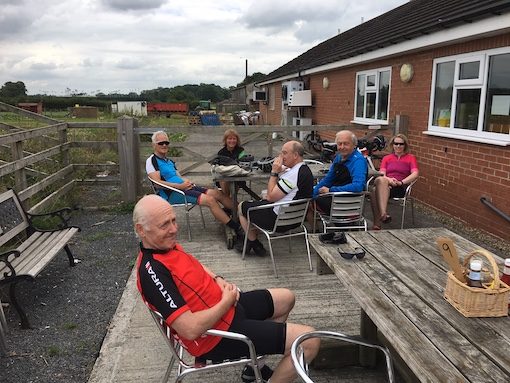 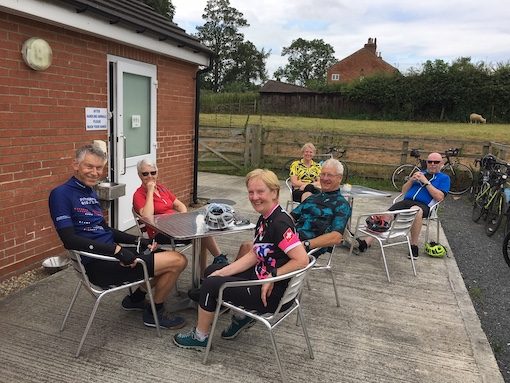 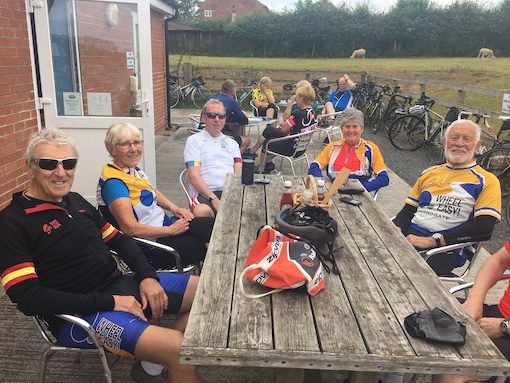 Six of us formed one of the Medium Plus groups that left Hornbeam heading for the environs of York. By the time we reached the cycle track by Wetherby Race Course we were down to four. After a brisk ride we arrived at Tadcaster for some refreshments. The Lemon Tree was the busiest I have ever seen it. When it came to the orders, horror of horrors they had run out of fruit scones, so we had to revert to cheese scones. Suitably refreshed we made our way to Acaster Malbis and the Planets cycleway. At York we then headed back to Harrogate via the usual route of Askam Richard, Long Marston and Knaresborough. At the top of Knaresborough Hill, we came across the Medium Plus Long Ride on their way back from Castle Howard. PCJ 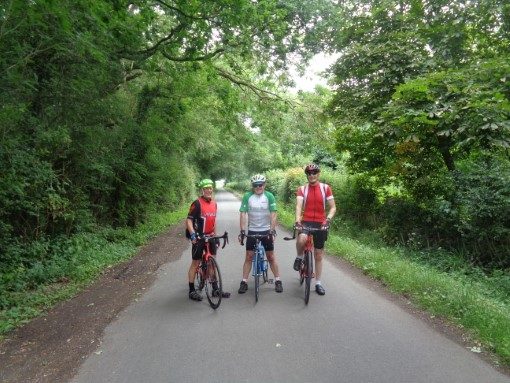 6 of us, James, Kevin, Colin, Al, John and Liz decided to set off after Peter at a slower pace. We followed the same route via Kirkby Overblow, Wetherby and Wighill though John left us at Walton as he needed to get back. We reached Bolton Percy by 11.30 and were soon sat outside enjoying our early lunch at Doylys. There was no sign of any of the medium plus riders. Soon we were passing Acaster Malbis and joined the planet route from Jupiter to the Sun. Then it was the longer slog back, often into the wind, keeping up our energy levels with jelly babies. We stopped at Tockwith to read the plaque and admire the plane then it was time to drop off Al and the group split into 2 heading for Knaresborough or Harrogate. My speedo said 58 miles at 11.2 mph average. Thanks everyone for a great ride. Liz P

Six people, Jill, Monica, Phil, Peter, Mike & Steve opted for the steadier paced ride with two cafe stops. It was an easy going flat ride to our first stop at Sutton Park where we arrived a few minutes before they were due to open but they very kindly agreed to serve us. After coffee it wasn’t long before we reached the more undulating section of the ride at Bulmer Bank where Mike made good use of his ebike! We took the recommended short cut, which turned out to be a new road to most of us, to avoid the triathlon taking place at Castle Howard. After Terrington Peter headed off towards Hovingham for some extra miles while the rest of the group managed to get split up for a while after a missed turning, but were all reunited for the second stop in Easingwold where we were joined by John H. It was then home via Boroughbridge & Knaresborough after an enjoyable ride of 70 miles – it was good to see some ‘new’ faces on the long ride today.  Jill. 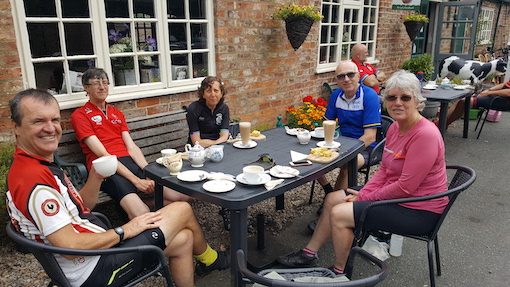 Due to a few technical issues, this is the ride that nearly got away, however in excess of twenty riders clearly received the memo and turned up for an early-starter medium plus/long ride to Castle Howard.  It was a game of four quarters with a large group of fourteen splitting into two with the faster of the pair catching up, following a slightly delayed start, just before we reached our café stop.  The big unanswered question with Castle Howard was, would our ride clash with the triathlon which was running over the whole weekend?  It did, but the road race was very well marshalled and we fed seamlessly into the straight stretch past The Arboretum.  I confess that I might not have made it entirely clear that we were not part of the sportive as we were cheered, clapped and photographed along the route!  Lunch was an al fresco affair at Yorkshire Lavender which has the glorious Howardian Hills and Ryedale countryside as a backdrop which looked particularly stunning today.  The deck was re-shuffled for the return journey and fourteen split again along pace lines with the faster group soon a mere spec on the horizon as they set a cracking pace for home.  There was unanimous support for today’s 8.30 am start as we covered 75 miles, or thereabouts, and were back home at our usual time.  Maybe an option to try again from time to time during the high summer weekends.  Thank you to all who came along today and made it such a great day out.  Helen B 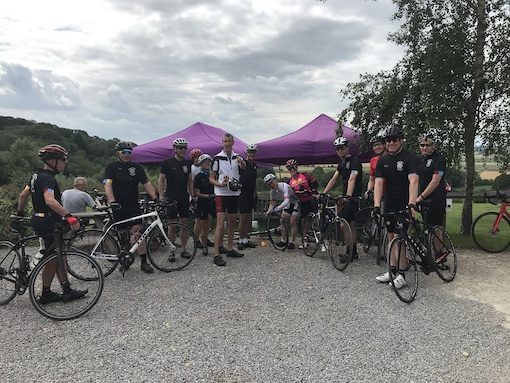 Due to the forthcoming Audax 200K (134 miles) Clumber to Humber, myself and Liz F decided to ride out to Hutton le Hole, the easy way! Around 95 miles. Our aim was to pace ourselves at a steady cycling pace so we could save some energy towards the end of the Audax ride. We left Bilton Lane at 8.00am cycling out to Farnham, Great Ouseburn, Aldwark, Easingwold, Crayke and Brandsby. Here we met lots of cyclists coming towards us, some very fast, they were competing in the Castle Howard Triathlon. Turning right at Hovingham onto the B1257 we then got a good pacer in front of us, a tractor going at 11mph! We manged to pass, then a left turn at Barton le Street towards Great Edstone, a small village on a hill in rather flat landscape. On towards Appleton le Moors and Hutton le Hole stopping for a coffee and food, just before a large group of motor cyclist arrived. Then it was time to tackle the hill to Gillamoor. Then on to Fadmore with a nice long downhill turning right and crossing the ford in Kirkdale. Looking to the right you could see a small ‘minster’.  Now it was an easy cycle to Nunnington, Oswaldkirk and the bumpy bits going through Ampleforth passing Byland Abbey and into Coxwold. At the crossroads we went straight across passing the old railway signal box and about a mile before Carlton Husthwaite some more history of the old Coxwold railway line. The old station master’s office is now a very nice ‘Honesty Café’ table, chairs, kettle, milk in the fridge, tea and coffee and a few snacks, all priced, just make your own and put your payment in the small ‘honesty bucket’. If any of you are out this way call in. Then to Sessay and the usual route to Boroughbridge where we stopped and thought about Knaresborough Hill! A quick vote, we both agreed to go to Roecliffe, Bishop Monkton then the Mountgarret Estate, Ripley and Greenway home. 103 miles, we met our aims, a steady ride, moving average speed of 12mph and we felt as fresh as when we set off! Chris 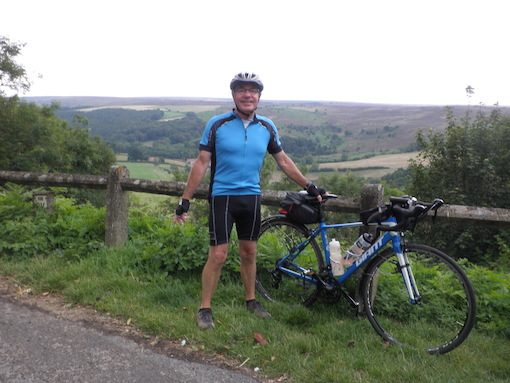