A group of 9 set off from the Showground in sunshine and hardly any wind. The basis of the ride was route 15 so we went to Ripley then Hollybank Lane and on to Birstwith and Darley. From here it was definitely uphill until we reached the track through the Naval base and then a short stretch along the A59 to Fewston Farm Shop. Here we enjoyed a break sat outside in the sunshine with coffees, scones etc. The consensus for the rest of the ride was Cobby Syke, Wydra, Watson Lane and Little Almscliffe. 29 miles and nearly 2000 ft. Thanks to Monica, Nicki, Dave R, Richard, Keith M, John R, Keith M, and Mark, Sorry. I forgot to take a photo. Liz P

What a perfect day for cycling! Spring sunshine and hardly any wind. 5 set off from the Showground on route 205 which took us to Kirkby Overblow, Wetherby and along the cycle way past the racecourse to Thorp Arch where Helen peeled off as she needed to return early. This left Tall Tim, Ian, Vince and I to complete the route heading for the prison refreshment stop at Askham Richard via the marina at Acaster Malbis and the Planets cycle way. Perfect photo opportunity at the marina. Those who weren’t wearing shorts were beginning to feel the heat and one of us just couldn’t make up their mind wearing overshoes, warm leggings and a short sleeve cycling shirt! After coffee, sandwiches/crisps and gigantic slices of cake at Askham Richard we rode back the shortest way via Tockwith and Spofforth to Harrogate. A great 55 mile flattish ride at an average 15.4 mph. Tim R 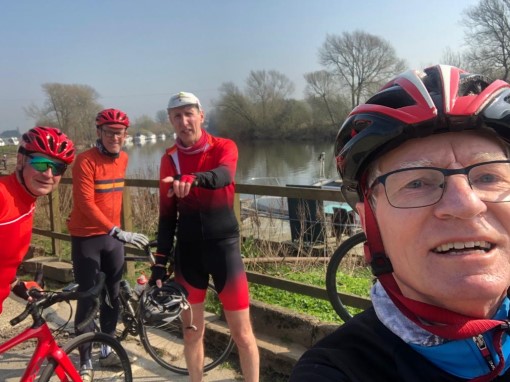 Eleven people assembled for the short ride today on a morning both sunny and misty. It was good to meet up with returning members. In small groups we made our way to Knox bridge and onto Hampsthwsite. The sun came fully out as we started with to climb out of Hampsthwsite to Kettlesing. Kettlesing was beginning to feel spring like as we meandered through the lanes. Once past Menwith, we were soon climbing up to Little Almscliffe and the swoop down to Beckwithshaw. Most of us made our way to Horticap where we enjoyed a pleasant coffee stop. All in all, a chatty ride in lovely countryside on a sunny morning, Alison N 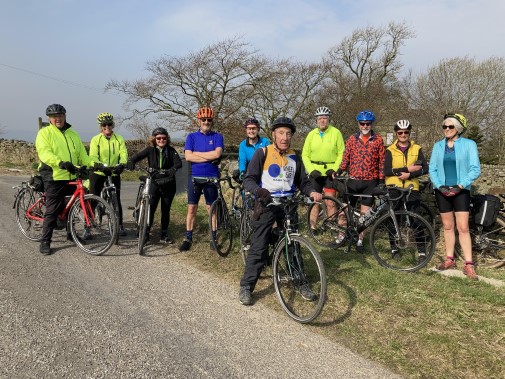 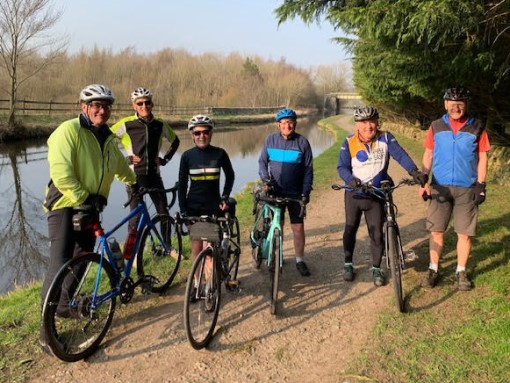 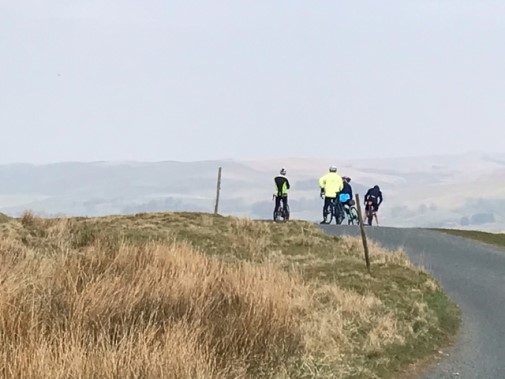 The Awayday season got underway in Gargrave ( after a false start last week) in warm sunshine and blue skies as 19 riders gathered at the Anchor Inn and set off in three groups.

The first half of the ride set off towards Settle via Winterburn and Airton and involved some steep climbing. However we were rewarded with great views as we cycled along the ridge and passed some non-plussed Highland cows ( at least they didn’t seem to mind having their photo taken!)

We then tackled the tricky descent into Settle and on to our lunchtime destination, Elaines at Feizor. This is a real ‘star’ of a cafe and once again they didn’t disappoint, despite being busy and short staffed they did well coping with all of us as we enjoyed the sunshine (and rest).

The second half of the ride took us on a more rolling hills route via Giggleswick, Rathmell, and Wigglesworth. From here we rode over Dunhazles to Halton West and Bank Newton and then along the towpath back to the Anchor Inn.

Throughout the weather was first class and perhaps one of the best days we have had in March and so the views and scenery didn’t disappoint as it showed the Dales off at its best. It was another great route devised by Mike Clark who keeps finding traffic free lanes in the area!

Thanks to him and James Grimshaw and Richard Leake who lead the groups and to everyone who turned out after last weeks false start.

A ride of 42 miles/2800 feet of ascent and well worth the effort! Kevin 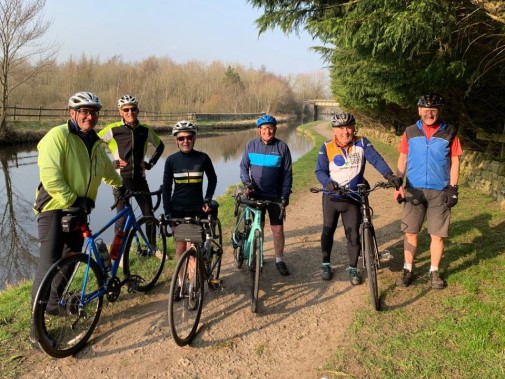 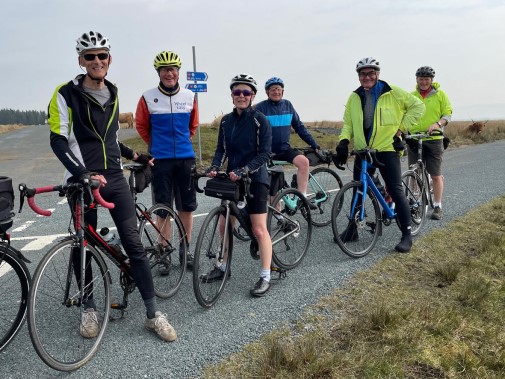 A happy band of seven set off after the pace-setting hard riders, through quiet lanes, hazy sunshine and ever-warming airs.  Slightly delayed by a phone call and a minor mechanical, we powered up the hill from Airton to make friends with the Highland cattle at the top.  Then down to Scalebor Force where we stopped to enjoy the waterfall, and several gentlemen added their contribution to it.

Taking an insignificant but attractive fork in Settle kept us clear of the town’s retail opportunities (and clear of other riders, who missed it) and on towards Langcliffe, where a site foreman kindly let us through a construction site to see the early Victorian  Hoffman Kiln.  All except Liz F, who was barred !  Why ?  Do they know even more about her than we know ?  Is she really one of Putin’s people ?  The kiln was once the biggest lime kiln in Europe.  Few know of it, yet – but apparently it’s going to get its own visitor centre and cafe.  The bacon butties are ordered.  Just remember – you saw it here first.

Then over Stainforth packhorse bridge and on to Wharfe and Austwick, where I managed to lose two riders off the back of the group by racing to make sure those at the front took the right road.  Unfortunately they caught up at Elaine’s and gave me a load of stick for losing them.
The return home was less eventful.  Again taking an early turn into Giggleswick to avoid the fleshpots of Settle, we rode alongside the Tems.  OK, it’s only a stream, not as famous as the one in London (but much cleaner and spelled proper) but you can confuse folk who ask where you have been!
A mile of dicing with HGV death on the A682 left us uninjured but mentally scarred for the final few quiet miles through Bank Newton and back along the towpath to the Anchor Inn.  Thanks to all for your patience and forgiveness.  It was a splendid day out. Mike C. 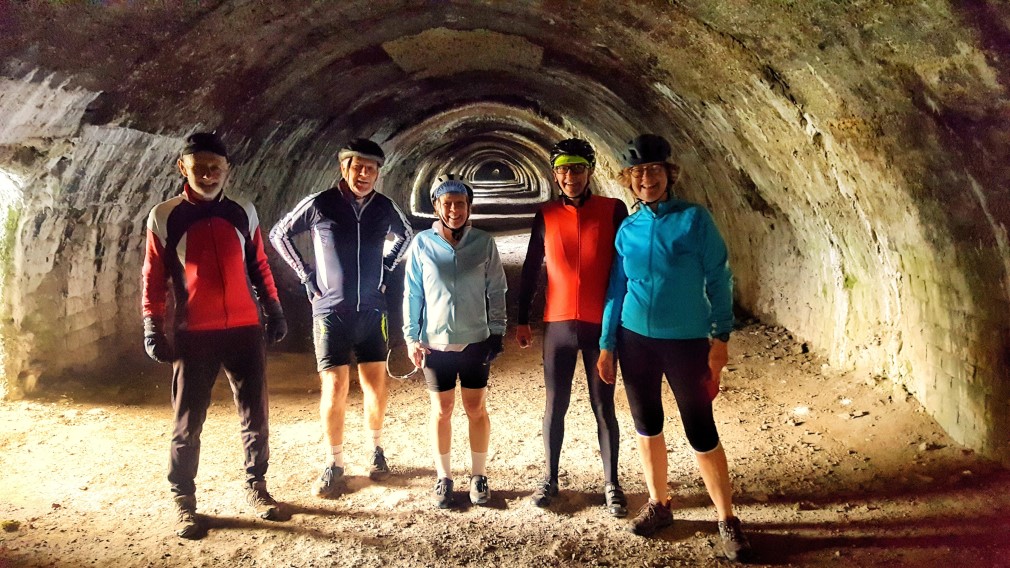