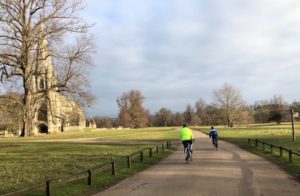 12 riders at Hornbeam. 3 went off in a faster group, gaining Mike at Ripley and Monica who with her present training regime was far too fast for standard Wanderer pace! So 8 Wanderers proceeded up Scarah Bank to Watergate Lane and on to Fountains with Dennis leaving us just before to return for a family lunch. Everyone met up for a while in Fountains large cafe for an early lunch and Corinne took care of the ride photographs. The cafe closes on Monday for about 6 weeks. With the faster group heading off first, our return was via Ripon, Littlethorpe, Farnham and Knaresborough. A somewhat hilly ride of about 34 miles.
Thanks to Alison for devising the route and hope she gets well soon. Liz P 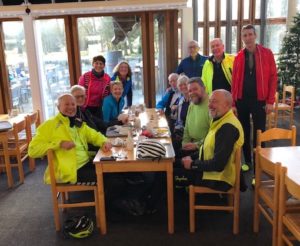 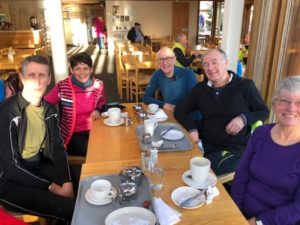 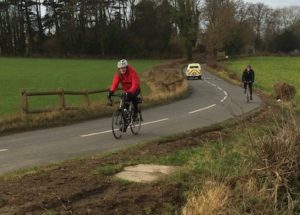 Welcome back Glynn for his first ride since May and he was one of several riding in to Hornbeam from Leeds, Ripley and Knaresborough. So eight of us ventured on a planned route towards Sicklinghall and Collingham leaving Martin and John to coffee in Wetherby. Glynn peeled off after Jewitt Lane back to Leeds looking very fit and glad to be back on the bike after an injury, the rest of us towards Bramham and the cycle path to Wetherby where we were well fed and watered at North Street Deli. A great ride out, chilly to begin with but some good miles and a bit of climbing to start off 2019. 35-40 miles for most of us. Gia 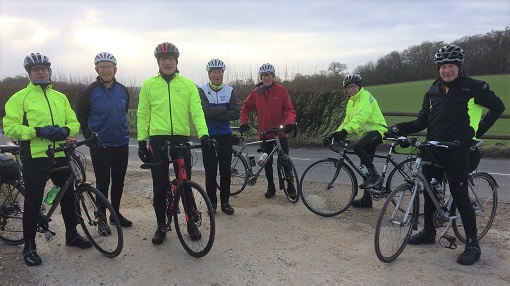 We had a good turnout at Low Bridge, at least a dozen, which shows we have a good recovery rate from Christmas and New Year Festivities.
Because of our numbers Morrison`s Cafe in Boroughbridge was chosen as our first cafe stop, with it being self service which speeds things up, we have no problems with small independent cafe`s if our numbers are less than say six.
Before Occaney we stopped to chat with Caroline and the Ladies (there to add a bit of class to cycling), lots of Happy New Year`s greeting and we then had our photo`s taken.
Probably to be used as a warning to their children and grandchildren on the perils of a misspent youth or a misspent latter years.
Then on to the said cafe (see photos).
After caffeine, calories and chat and news of a cyclists victory on the time availability of Baked Beans (Power to the Pedals, Dave S) away went the “A” team.
The “B” team comprising Bill, Dave P, Dave W, Nick and Norman headed for Thornton Bridge, Brafferton (Bill`s favourite bit of French) and on to Myton on Swale Bridge where the dastardly Scots thumped the poor young English lads fresh out of York (see photo of a Dastardly Scot attacking some young English lads ).
Then on to Flawith, Aldwark village, Aldwark Bridge to take hot drinks and flapjacks in Great Ouseburn Post Office ( one that has not closed lucky for us).
Then home via Arkendale, Ferrensby and Knaresborough.
An excellent ride for the “B” team, good weather, quiet roads, an interesting route all with good company, perfick.
For Bill and Dave P it was the longest ride of the year, not forgetting the bl……. climb from the River Nidd to Harlow Hill. Happy and Healthy New Year to all of us.    Dave P. 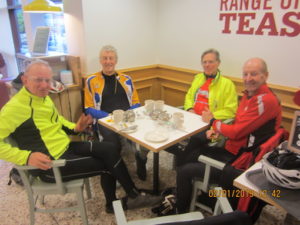 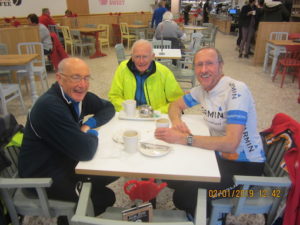 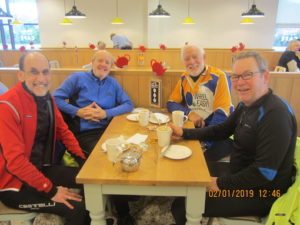 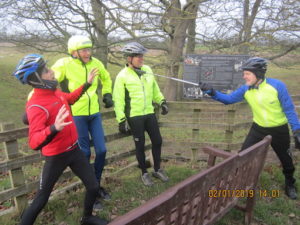 The Other EG’s Ride

The other EG team left a very happy Morrison break to an almost immediate confrontation, when Dave P(2) rode his brand spanking Specialised into the back of Phil. New bikes must be suitably christened but this did seem a bit on the harsh side. He had only ridden it from Low Bridge.

Everyone survived, bikes were dusted down and checked over and onward in the Easingwold direction, at ever increasingly furious pace.

The Curious Table was curiously full of civilians and we hastily availed ourselves of the hospitality on offer at the Sugar Mouse Luxury Confectionery Café, where the beans were…..well….luxurious, I suppose.

We stayed and chatted far longer than the meal necessitated, making us wonder whether the chatting is overtaking the cycling for popularity. Anyway, a great bunch of lads, happy in each other’s company, and nowt wrong wi’ that.

An easy and relatively uneventful journey back home followed, via the Aldwark Bridge, in stunning weather for the time of year.

“This is the best ride I’ve been on all year”, quipped Trefor in a carefully chosen phrase as we rolled briskly from Ilkley to Otley on the return leg of the Long Ride.  Even if his tongue hadn’t been in his cheek, he was right – the day’s conditions were excellent for winter cycling: cold but dry with no ice, a gentle breeze, hazy sun at times but nothing low-slung to create vision or strobing issues.  All that was needed were a few hills to keep us warm, which is what we got.  Outward through Kirkby Overblow went seven riders, en route to Bramhope to collect an eighth.  Creskeld Lane provided the most benign climb of the ridge (compared to the three others on offer) up to Bramhope where, sadly, our eighth member was too under-the-weather to join us but wished us a Happy New Year from the kerbside.  Our cafe of choice was Christ Church on The Grove, reached after a climb to the Moor through Menston and a descent past Cow and Calf.  The cafe was very busy but we got served quickly – well done to the volunteer staff, amazing.  New member Tony joined us later having punctured in Menston but preferred to fix it without an attentive audience – understandable, I think.  The return leg saw the group split into two with one group taking the back road along the river while the others took in a post-lunch climb up through Middleton to the Langbar turn and then back down along Carter’s Lane.  Catching the other group on the climb to Farnley, the group completed the rest of the ride through Leathley, Stainburn and North Rigton, finally earning a nice coast down Brackenthwaite Lane to our various farewell points and home.  At 50 plus miles and 4000 ft of hill work it was a testing ride for some of the more mortal riders in the group, but I can’t help but agree with Trefor – it was my best ride of the year too!.  TerryS

No tome to write a ride report…but five of us set off for a scone at the Bean, Boroughbridge.  The E.gs were assembling
At Low Bridge….and then en route posed for a photo shoot with us as zoomed off…four of the group took the planned route yo Boroughbridge, one, feeling weedy, took a pleasant short cut.  Arriving first at the Bean Cafe a kind lady let me use their beautiful toilet but told us the were shut and recommended the next best cafe in Boroughbridge..Bowe and Co.  As i was preparing to enter a red looking Plenty, which used to  be something else the other four rolled up. Bridgette showed us the new impressive back room and we had a coffee and carbohyrates. Worth stopping at.  We then headed for home the easy way,  with Bridgette and Speedy speeding ahead to get home before the rain.   Jen and Monica, followed at a respectful distance by Caroline, returned at a gentle pace to Harrogate and home.  31 miles for some,  slightly lessfor another. A lovely day for a cycle ride. CG 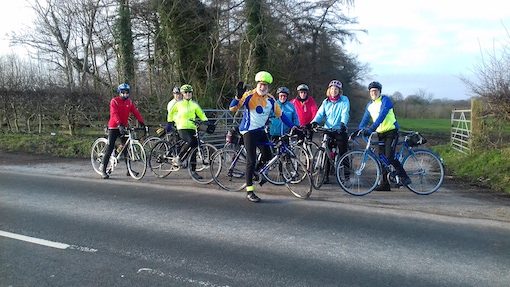