There were loads of people up for the Medium Plus ride this morning; I guess this is because it looked an easier option than the Medium Ride, which looked a tad hilly. Alliances were formed, based on who knows what, and several groups set off.

My group looked to be only four strong until Jill appeared on the back (thanks Jill), and we made our way down to Low Bridge, where we exchanged Marish for Geoff, whom I was pleased to see after his hasty exit from the EG’s ride on Wednesday.
A gentle ride was the promise, and gentle it was. A decision to avoid the bridlepath at Copgrove was democratically reached and we meandered along through Boroughbridge and past Dishforth Airfield to an early arrival in Ripon, having been overtaken by one of the faster groups, who had set out before us, but had been more diligent in their interpretation of the route.

Oliver’s Pantry was the venue of choice for all sections of the ride this morning, but with plenty of accommodation there was no problem.

The food was good, medium priced, and brought out with excellent speedy service. What more is there?

Ripon bypass was quite busy but we all made it safely, but a catastrophe of epic proportions was narrowly avoided in Littlethorpe when the vicar strolled into the road right in front of me. Jill thought that there would have been very bad Karma had I hit him, but fortunately he stepped back at the eleventh hour, guided either by forces we don’t understand, or my shout of “Oi”.

We had attracted Allen and Mike at the lunch break, and soaked up Andy from the faster group ahead on the way home, and met up with Liz as we entered the Greenway. Thereafter group members gradually peeled off for home as we neared Harrogate.

As well as those already mentioned thanks also to Fred, and Chris, both nursing debilitations in the legs; I hope you are both on the mend.

Tail-End Charlie Group of the Medium Plus. 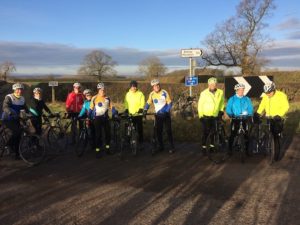 an advantage to get to the cafe stop after all the other Groups had finished and left space for us. So 11 of us set off through Knaresborough, to be joined at Grimbald Bridge by Maris who had defected from the Group in front. All was well to Farnham but then Charlie suffered a severed gear cable and had to leave us to return, on foot, to Knaresborough. Hope all is now well with you, Charlie and that you got back safely. We progressed without further incident to the outskirts of Roecliffe for the photoshoot, courtesy of Gia, who was doing her best to observe her New Year’s resolution which I am afraid I am not at liberty to disclose. 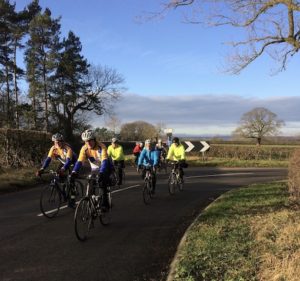 Onwards with the bonus of sunshine through Boroughbridge to Dishforth and Marton-le-Moor, a squeaking bottom bracket manifested itself and although it was not resolved, it did provoke the inevitable earnest discussion on bottom brackets generally. With a little detour through Copt Hewick into Sharow and we managed to arrive at Oliver’s Pantry just as all the faster groups were vacating so we had our choice of table. The usual variety of food, drinks and topics of conversation ensued, including the return route and in the absence of an official Ride Leader the various unofficial ones took a decision to divert and return through the Deer Park, Watergate Lane, Ripley and the Greenway. At the Bilton Lane junction those heading for Knaresborough or destinations beyond took their leave to return through Starbeck whilst the remainder continued on into Harrogate. With well over 40 miles on the clock and good weather we had an excellent day out for the first Sunday of the New Year ands thanks to all who came. James G.

Consternation at Hornbeam: where are you taking us?  Where is Briscoe Ridge Lane (actually Briscoe Rigg on the OS map – thanks Geraldine and Joe)?  Does Pill White Lane even exist?  15 souls, some with (possibly misplaced) confidence in me, others because they enjoy a route planning disaster, set off in 3 separate groups (many thanks to the informal leaders and back markers).  The method in the madness gradually became clear: this was a completely unapologetic ‘local highlights’ route, linking the best views in the area.  Colin T. pointed out the views from Briscoe Ridge/Rigg some time ago, and they really are fantastic, south to Almscliffe Crag, and north and west across Nidderdale and beyond.  Then, views along lower Wharfedale, first from the ridge above Lindley (Pill White Lane is the road you get to when you have cycled up from Farnley and Lindley), and again as we rode up the last part of Norwood Edge.  Next, to-die-for views north across Nidderdale again, which we admired and then cycled into, towards Menwith Hill.  Finally, the under-appreciated views east on the road from Clapham Green to Hampsthwaite.  Brilliant company, on a clear and mild day.  An augury, maybe, for 2019: fingers crossed.  28 miles and over 2000 feet/600 metres of climbing.  Given that last number, gold stars to those who were wondering if they would get round – and did, easily.  Justin K. 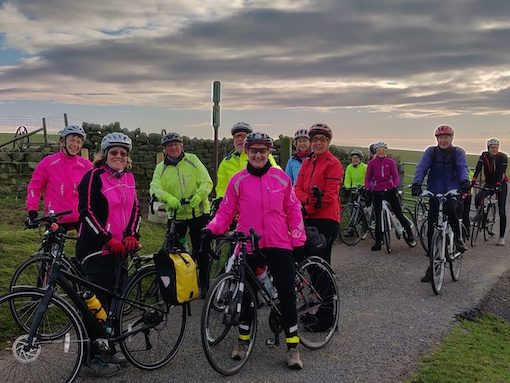 “This is the best ride I’ve been on all year”, quipped Trefor in a carefully chosen phrase as we rolled briskly from Ilkley to Otley on the return leg of the Long Ride.  Even if his tongue hadn’t been in his cheek, he was right – the day’s conditions were excellent for winter cycling: cold but dry with no ice, a gentle breeze, hazy sun at times but nothing low-slung to create vision or strobing issues.  All that was needed were a few hills to keep us warm, which is what we got.  Outward through Kirkby Overblow went seven riders, en route to Bramhope to collect an eighth.  Creskeld Lane provided the most benign climb of the ridge (compared to the three others on offer) up to Bramhope where, sadly, our eighth member was too under-the-weather to join us but wished us a Happy New Year from the kerbside.  Our cafe of choice was Christ Church on The Grove, reached after a climb to the Moor through Menston and a descent past Cow and Calf.  The cafe was very busy but we got served quickly – well done to the volunteer staff, amazing.  New member Tony joined us later having punctured in Menston but preferred to fix it without an attentive audience – understandable, I think.  The return leg saw the group split into two with one group taking the back road along the river while the others took in a post-lunch climb up through Middleton to the Langbar turn and then back down along Carter’s Lane.  Catching the other group on the climb to Farnley, the group completed the rest of the ride through Leathley, Stainburn and North Rigton, finally earning a nice coast down Brackenthwaite Lane to our various farewell points and home.  At 50 plus miles and 4000 ft of hill work it was a testing ride for some of the more mortal riders in the group, but I can’t help but agree with Trefor – it was my best ride of the year too!.