Seven riders tackled the short route this morning and showed true Yorkshire grit by cheerfully embracing sub-optimal riding conditions.  Let’s be honest, it was ridiculously cold and wet.  At the farthest point, we investigated the newly opened café at the Harrogate Garden Centre between Bishop Monkton and Markington, but the offer of outside seating in driving rain and a fresh breeze just didn’t cut it so we set off with Ripley Castle Café in mind which ticked all the toasty, inside, teacake eating boxes.  Special kudos to Justine who heroically battled on despite cold hands and also to Janet who demonstrated A-lister back marking skills.  Thank you to everyone – Bob, Justine, Steve, Sarah, Janet and Paul.  Helen B 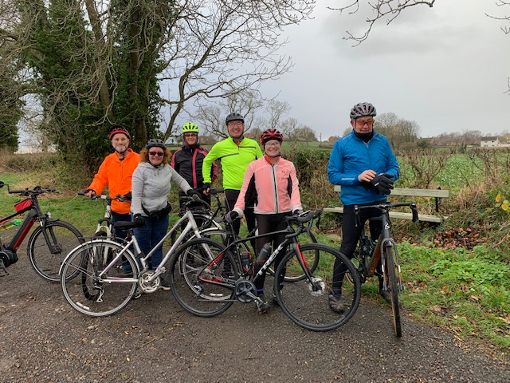 The six Wanderers made good progress out of Harrogate and on to Kirkby Overblow before meeting a ROAD CLOSED sign on the planned route. We ignored it and a polite discussion with the
men working on cable laying at Barrowby ensured  we were able to progress on foot before remounting to a car free road. Wonderful!

After Sicklinghall we waved farewell to Alison,who was to return via Wetherby, while others sped on through Linton and up Jewitt Lane before stopping for a group photo along the ridge to East Rigton. We wandered through Boston Spa and crossed the new bridge to the Thorpe Arch coffee stop. It was so empty, service was rapid, and the bacon and sausage baps, enormous.

Heading home, we met a second advisory notice, on the Wetherby cyclepath – PATH CLOSED. We ignored it. We didn’t find any obstacles and enjoyed the trouble free route home. A fine
December ride in excellent company . Mike P. 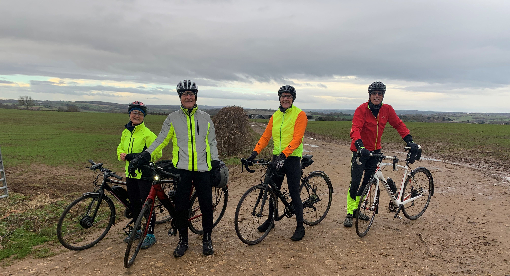 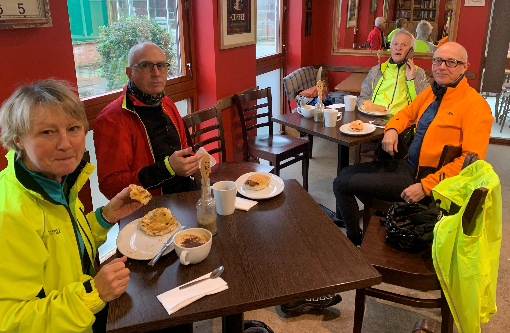 Making use of the newly cleared paths from the Showground Gia, Yvonne, Kevin, Tim (5?) and James set off for Jack Lane, collected Paul in Beckwithshaw and after a bit of a struggle with the wind up to Little Almscliffe, enjoyed the usual roller coaster along Jack Lane. For a change we went down and across the Reservoir to Farnley and Leathley and into the Farm Shop at Pool chased by the rain which was still hanging around after coffee and sustenance. Accordingly an assortment of waterproofs was the order of the day and a return over Briscoe Ridge at which point the rain stopped but the temperature started to drop. Around 30 miles or so with some climbing but in good company. James G 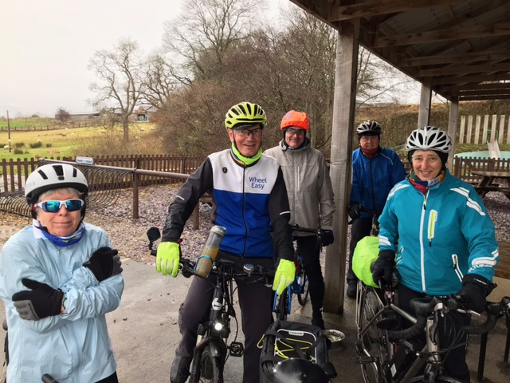 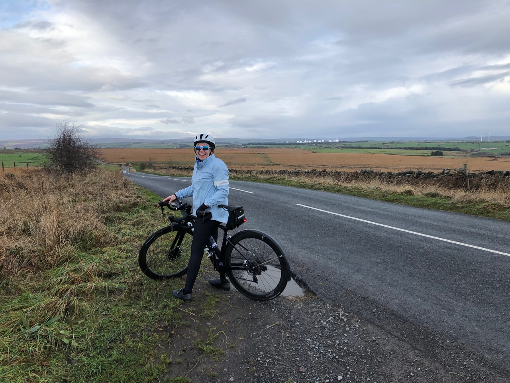 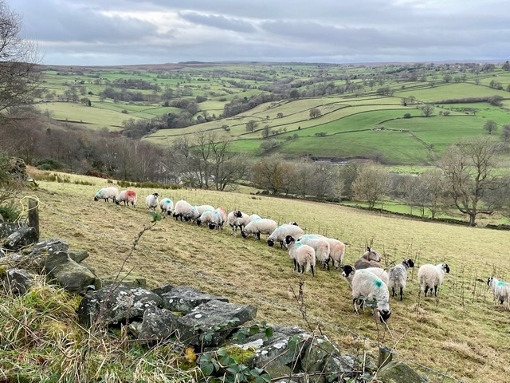 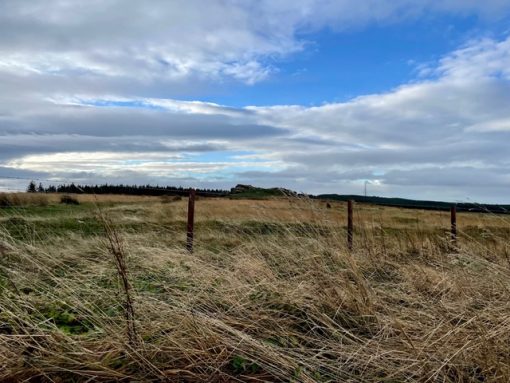 A very small but select group of three EG’s congregated at Low Bridge and discussed the weather and a few other things while hoping for more riders to turn up, but three it remained. Paul had other commitments and couldn’t join the ride but it was good to see him and he raised the standard of debate for the short time he was there. So after Paul peeled off, your remaining two hardy souls, Colin and Peter B continued with a general northeasterly direction in mind and hoping to maintain all the very best of the EG’s traditions.

Light rain and muddy roads were annoying on the way to Boroughbridge, via Great Ouseburn. Peter needs a proper rear mudguard if anyone has one lying around. Poached eggs on toast set us up for the onward northward leg from B’bridge. The rain had stopped and the sun was even poking out occasionally and your intrepid duo eventually ended up at Fountain’s Abbey having successfully navigated through Rainton, Wath and Ripon. Fountain’s cafe looked closed from the outside but was open on the inside and served up some good hot chocolate. Light was fading after that and our trusty lamps were illuminated for the rest of the ride. We parted company in Ripley after a really good day out and 50 to 55 miles each.