Despite the poor weather five stalwarts joined me on the Short Ride – Margaret, Liz P, Barbara, Paul and Martin – and after Martin’s local knowledge took us through the “saints” we headed down the Greenway which unsurprisingly was not very busy today.

After a short stop in Ripley we took the busy Ripon road but only for a short distance before turning off through Nidd, Brearton, Scotton and Lingerfield into Scriven and then after a unanimous vote for a coffee stop, took Chain Land into Stanleys Cafe on the first floor of Barker & Stonehouse. Hot drinks and warm food was very welcome after the damp cold morning and afterwards the group kindly relieved me of my duties to return home without taking everyone back to Harrogate up Knaresborough Hill.

Thanks to everyone for their good company and to Martin for kindly back marking. About 20 miles and no significant climbing. James G 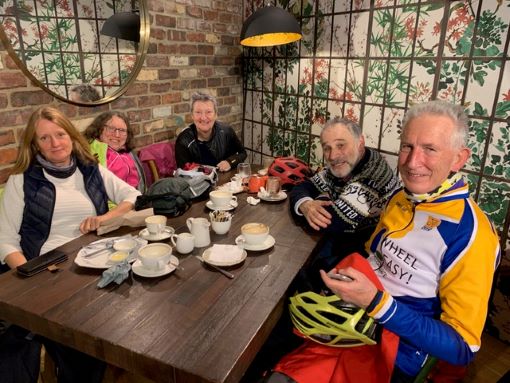 With no other takers for a brisk version of the Medium ride out to Fewston and back through Hampswaithe, Navah and Mark set out on their own, but quickly picked up Dennis (the Younger) as they left the showgrounds.

The trio had a cold, wet ride, battling a hearty headwind from Harrogate through Fewston, where they stopped to catch a (very poorly done) selfie with a snippet of rainbow in the background. The right turn onto Menwith Hill Road brought much-needed relief from the headwind, but all got really chilled without the effort and were very grateful for a stop in Hampswaithe at Sophie’s for hot drinks, snacks, and warmth.

The last seven miles were relatively dry, but still cold, and everyone was glad to get back to Harrogate for hot showers or baths. None of them were sure they’d have done the ride if they’d known in advance what it’d be like, but they were all glad to have done it and enjoyed the company immensely! Mark and Navah deemed it the worst weather they’d ridden in since moving to Harrogate in May. (Here’s a link to the Moose Mitts Navah had on her handlebars (click on “Drop Bar Version”): http://moosemitts.com/online-ordering.html) -Navah 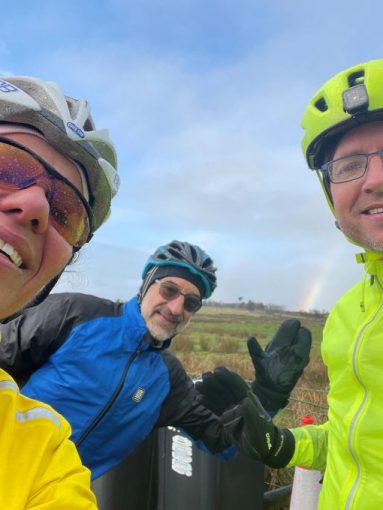 The Contrarians ride was another attempt to do route 56 to Ilkley. Six brave souls met a Hornbeam in the damp cold conditions.

Made very slow progress out to Timble due to a very strong westerly wind and periods of heavy rain that felt like hail. Chris B pealed of to head back early as he was not feeling the love today.

Five then braved the assent of Askwith moor where a riding position of lean to the right was adopted due to a very strong wind. Michael Ingles was very nearly blown into a farmers field through his open gate. We made slow progress to Ilkely where refreshments were had in Cafe Avanti; soup and half a sandwich was the warming order of the day.

Return was speedy due to the westerly wind now at our backs. Otley to Farnley and Leathley was our return then some more climbing to Stainburn up to Almscliffe Crag. Then Rigton to Brackenthwaite Lane to Burn Bridge. We all went our separate ways on Rossett Green Lane. 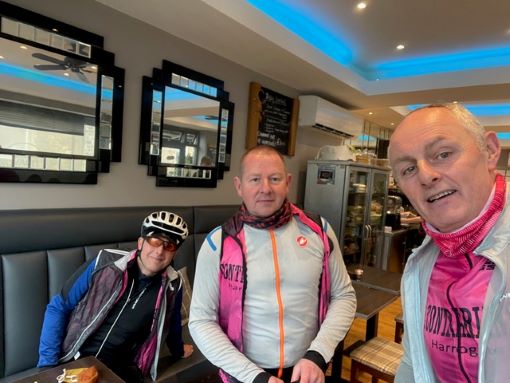 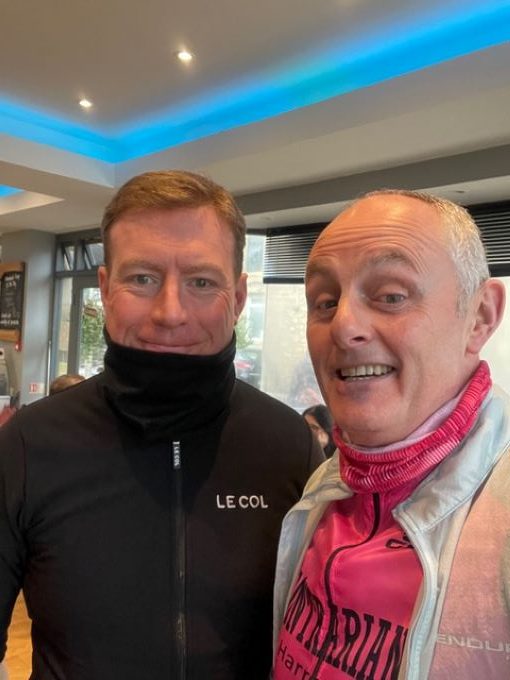