Riders were a bit thin on the ground this morning.

Myself and Sir John decided to take a leisurely ride via Knaresborough, Lingerfield and Nidd to Ripley.
We arrived at the church just as the castle clock was chiming 11 o’clock for a refreshment stop and then home in lovely sunshine.

Just under 20 miles. Jean B

On a cloudy morning five people turned up. Two from Wednesday Ride also joined us. We set off to Low Bridge. Three more joined us making a group of eight.

We set off at a comfortable pace. At Arkendale the roads were steaming. We ‘steamed’ along and in no time were at Bean Cafe. Jill found a table for eight which was nice as a group. We had a leisurely break coffee, scones and cake.

When we decided to move we took the road to Roecliffe and stopped at Devil’s Arrows  for photo session. Set off again, the sun came out, very pleasant. Next stop Bishop Monkton, photo shots in the sun. On the road again nearing home people started going their own routes home. Jill and Jeanie decided to go a little further. Only two of us for Knaresborough Hill . Thanks for turning out, very enjoyable and relaxed ride with good company. Mike W 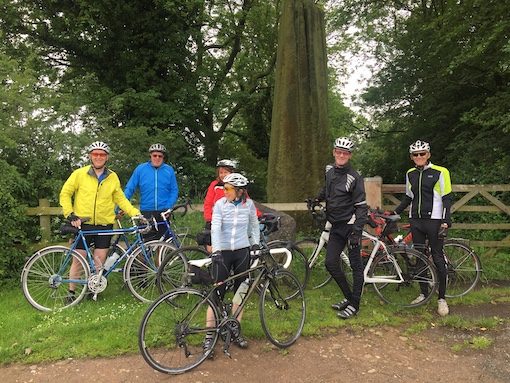 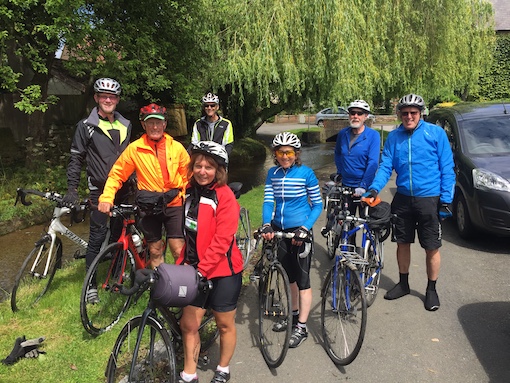 It was a damp start to the day, that light rain that wets you. Nobody said “its too wet to cycle, let’s go out for coffee”, so it was down to Low Bridge were the EG`s were a bit short on numbers, but then so were other Wheel-Easy groups.

We had Bob, Dave P, Eric and Geoff all raring to go, Bob’s choice was Wetherby and away we went picking up Dave Watson on the way. Bob’s electric machine was our Derny and away we went PDQ arriving in Wetherby in just over 30 minutes from leaving, this made one VEG most chuffed have not done that sort of time for quite a while now.

Refreshment was taken where the service is instant, and the coffee isn’t (see photo), after which it was Dave Watson’s call to lead us onwards. A nice route, quiet, with some “canny” hills, Linton, Collingham, East Rigton, Bob left us here, then keeping on the ridge to Thorner on dry roads with patches of blue sky.

At Bramham Dave P took his leave of the “A” team who headed for Tadcaster, he taking the cycle path back to Wetherby for more caffeine and calories then on the ridge to Kirkby Overblow, continuing on the ridge past Low Snape Farm, down to the roundabout and on to Harlow Hill via Burn Bridge.

Big thank you to the “A” team from a VEG who was still chuffed with his performance. Dave P 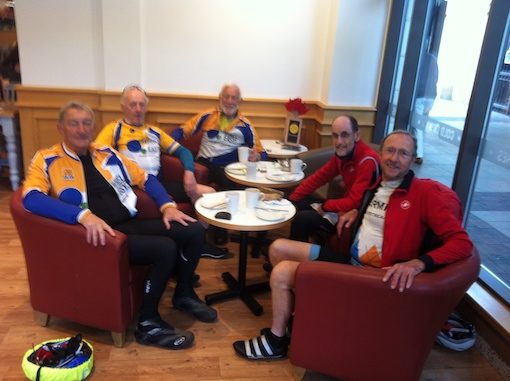 EG A Team ride report or how I managed to fit four cafe stops into a 50 mile ride!

As I was cycling along Knaresborough Riverside at 9.30 this morning, it started to rain yet again – exactly as forecast – so faced with waiting in the rain at Low Bridge or 30 minutes, or staying dry in a cafe and enjoying a cappuccino, well, its no contest.  The cafe won! Whilst drinking the cappuccino I called Dave S, who passes on his greetings to everyone, and reports that his rehab has progressed to spending two 15-minute sessions on an exercise bike each day, just three weeks to the day since his accident. Brilliant progress, Dave, and we all look forward to seeing you back on your bike with us in the near future.

The rain had stopped by the time I met the EGs at 10am, but the forecast had clearly put a lot of the stalwarts off, as there were just five out on the ride today.  Wetherby was the appointed cafe stop (number two for me), after which Bob turned his e-bike in the direction of home. Dave W led us through the country lanes from Collingham to Thorner and Bramham, where Dave P bid us farewell as he too was homeward bound.  That left us with an A Team of just three, in which the Waters’s now outnumbered the Daves by two to one.

As Dave W had to be home for his 3pm deadline, we continued to Taddy for lunch at the Lemon Tree (cafe stop number 3) and then back via Wighill, Rudgate Lane, Tockwith, Cattal, Hunsingore, Walshford, and Little Ribston, delivering Dave W back to Grimbalds Bridge at 2.45pm.  Perfect timing!

As Geoff W was going home to another part of Knaresborough, and it was still early, delightfully sunny and very warm, Eric W decided it would be an ideal opportunity to pay his first visit to the Watermill Cafe at Grimbalds Bridge (cafe stop number 4!), and delightful it was too, sitting on the balcony overlooking the river. It was made all the more delightful by sharing the balcony with a old friend from East Keswick who I hadn’t seen for 20 years since we moved to Harrogate.

Arrived home at 4pm. 40ish miles for the Knaresborough boys, 50 for this Harlow Hillbilly. Now then: four cafe stops in 50 miles: is this a record even for the EGs? Eric W

Today’s away day had a sense of ‘deja-vu’ as there was a tremendous rainstorm as we drove to Appleby and it had stopped raining when we arrived. This was exactly the same as had happened two years ago when we had done the ride previously!

The twenty riders(including Ian, a guest) who gathered in the Appleby car park were hoping for the same outcome over the whole day as last time it had turned out to be a beautiful sunny day. We need not have worried- the Douglas /Thompson combo pulled it off again weather wise with an even better day!

The faster group(four) and one of the steady group(seven) set off first with the second steady group(nine) setting off 15 mins later.

It was a lovely ride, with the sun coming out, to Dufton and then Acorn Bank for coffee with the last group leaving arriving first! To Kevins embarrassment he had missed out part of the ride and taken three miles off the ride. The cafe coped admirably with the peleton and we were able to sit outside and enjoy the cake. Kevin rescued his shattered reputation by bringing out the suncream and offering it to one and all!

The groups set off again and rode through some wonderful lanes and lovely villages as they made their way from the sandstone area of Dufton to the limestone fells. This really is a route to savour by taking it at a steady pace and enjoying the views, wildlife and plant life- and quiet roads in abundance! The ride up to Orton Scar was a delight and we made our way to lunch at our old favourite -the cycling cafe at Orton. As 16 riders tuned up almost together they did a fantastic job of getting drinks and food out as we enjoyed sitting in the sun.

Feeling fully refreshed we set off to climb up the fell and then rode on the fell road which gave us more great views and plant life- it felt almost like the Dolomites!

By now the two groups were merging and we all enjoyed the rolling lanes back towards Appleby. We made our obligatory stop to view Rutter Falls where a ‘steady group’ photo was taken with everyone on the bridge and we then completed the ride back into Appleby with the sun still shining.

Although it is a long journey to the start it is well worth it to enjoy unspoilt countryside, quiet roads, great scenery and a chance to really look around.

Thanks to Colin for another great route, thanks to Richard and Steve for leading the fast and a steady group and for everyone who had the faith to turn out today on a very wet day in Harrogate and make the long journey. I am sure you will agree it was worth it! A ride of 43 miles for most, 40 for Colin’s group (as I took them the wrong way!). Kevin D 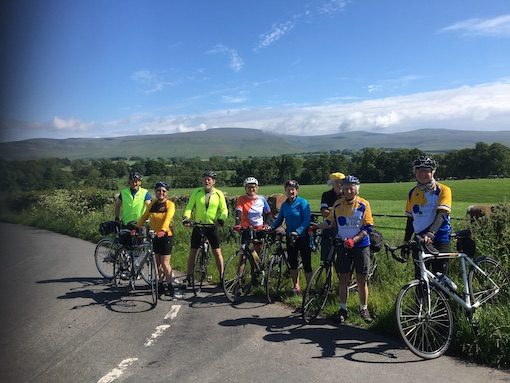 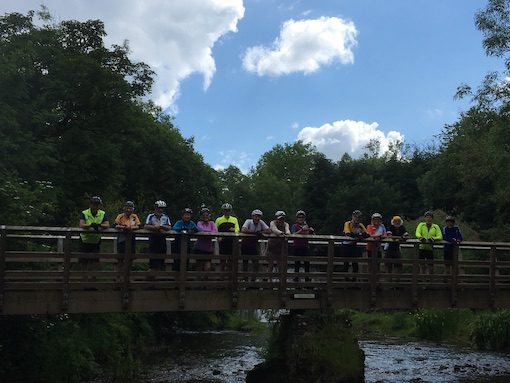 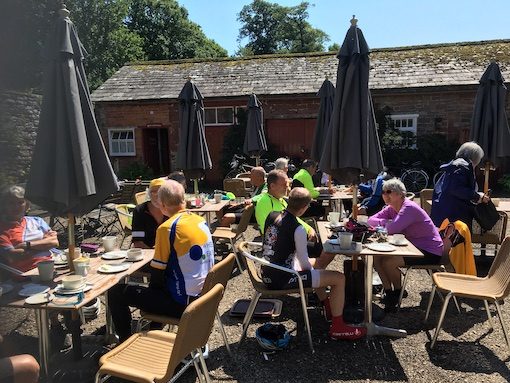 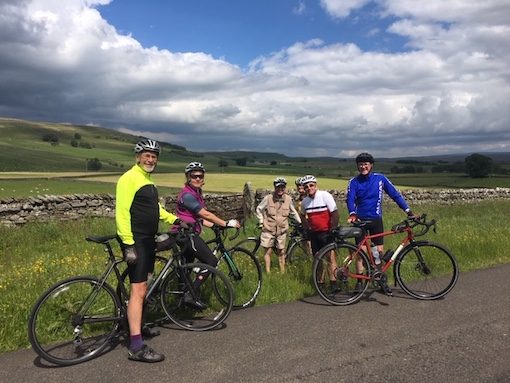 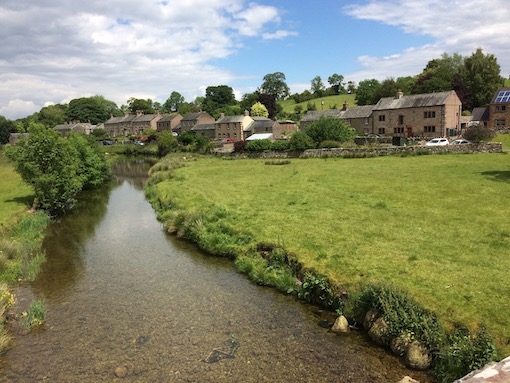 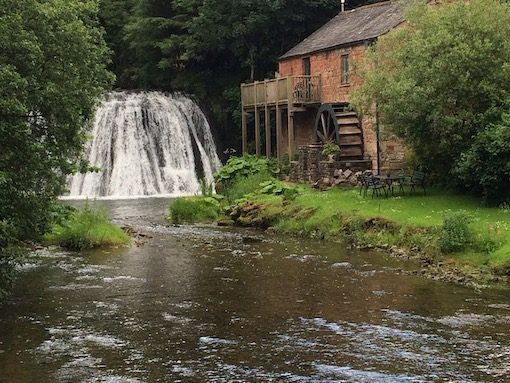 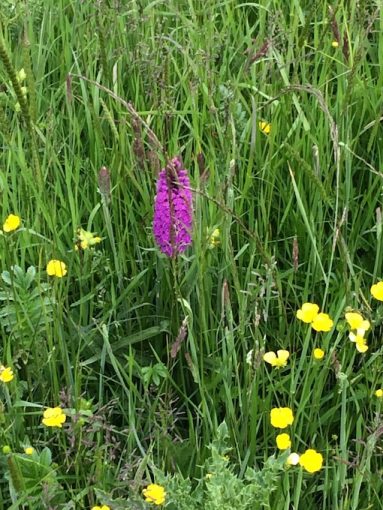