Well the ride report I wrote has escaped into the ether and I have neither the time or energy to do it again. Lovely ride, UCI research carried out, coffee and excellent cheese and onion pie to lunch, Monica did extra, Bridget and Rachael and I returned home via the Greenway….all good fun. 22 miles CG 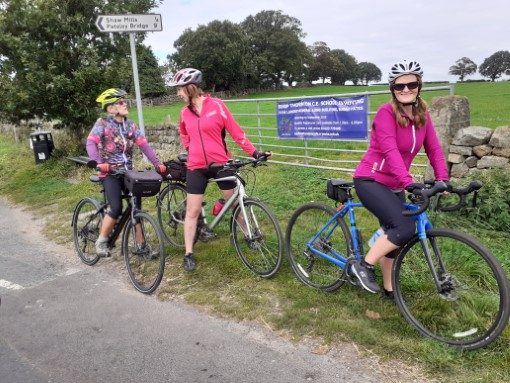 Fifteen happy Wanderers congregated at Hornbeam on a lovely morning. A good turnout considering that there was an away-day. On discussion of the route and most importantly the coffee stop Brian pointed out that Fewston Farm cafe was closed until the 18th . was that including or excluding the 18th! We’d check en route. Shortly after starting Yvonne got a puncture at the bottom of Leadhall Lane. It turned out to be a thorn which she must have picked up earlier.  At Almscliffe there was much debate about changes to the route as I couldn’t get through to Fewston Farm café, so concluded it must still be closed. It was decided to stick to the original route but aim for Sophies after Jack Hill Lane. The ride from Almscliffe down to Leathley was glorious as mainly downhill. Evidently one of Keith’s favourites. I’ve often gone the other way and found it rather an uphill struggle. At Leathley I managed to get through to Fewston café, so it was back to the original plan. Into Otley and through the housing estate then a very long pull up Newall Carr Road…it doesn’t seem so long in a car! Then the magical mystery tour began.  Down Dob Park and onto the farm track to the Pack Horse bridge. It was rather rough so we morphed into the Walking Wanderers. After crossing the bridge more walking to Jack Hill Lane then more walking to get up the hill, although a few did manage to cycle up. From then it was plain sailing to the coffee stop for well-deserved refreshments.  Several routes were discussed for the return into Harrogate. A larger group went via Penny Pot with the rest going past Little Almscliffe and Beckwithshaw.  30 miles, 2600 feet of ascent and descent, probably the slowest average speed for a ride and the most walking we’ve done whilst Wandering. Probably not to be repeated. 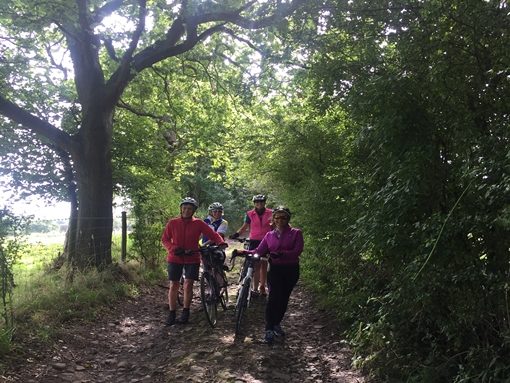 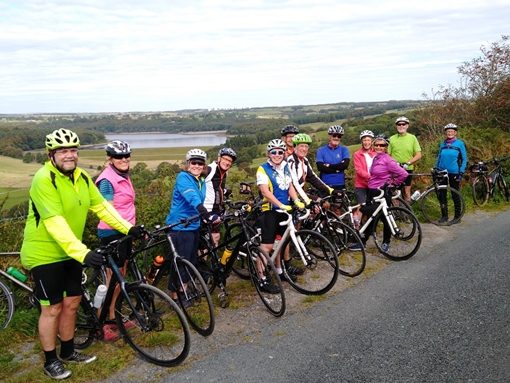 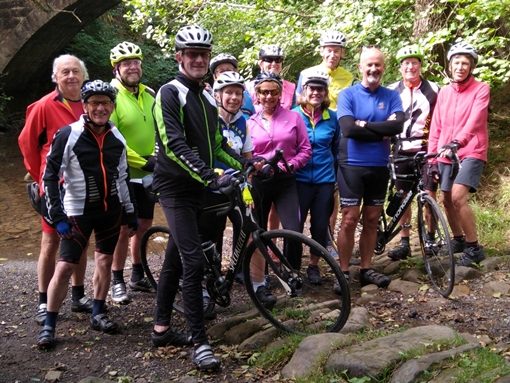 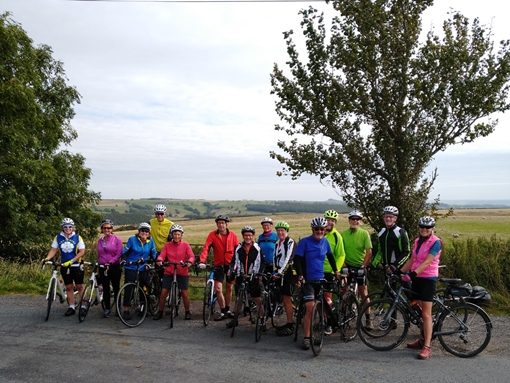 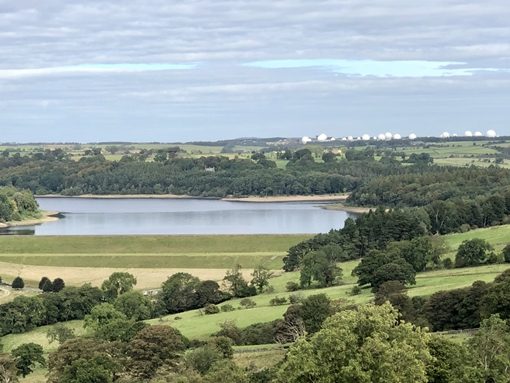 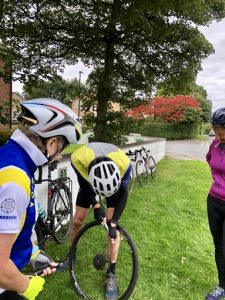 From Yvonne Davies,my thanks to tall Mike in shining armour who sorted out my rear wheel puncture on Leadhall lane and to Colin and Jane, who kindly waited with us.

Three riders decided to do the Women Elite Road Race course in the reverse direction, well the Harrogate end of the ride.  But before we embarked on the ride proper, we did a recce of the ongoing construction works for the Fan Zone on West Park.  Eventually, having photographed Dave R and Andy A next to the Broom Wagon, we left via the Greenway and onto Ripley to make our way to Masham by the usual route.  The climb on the way to Lofthouse was as testing as ever, so much so that it was decided to go to How Stean café for more refreshments.  Dave R met up with a prospective competitor for the Women Elite Race on his descent into Lofthouse. At How Stean an interesting debate took place as to “The problems of introducing cycling facilities in Harrogate et al”.  The ride back down the valley was interrupted by Dave R having to repair a puncture.  By the time we made our to Wilsill it was decided to take the main road back Harrogate via the toll bridge, Hampsthwaite, Clint Bank and the Greenway.  PCJ 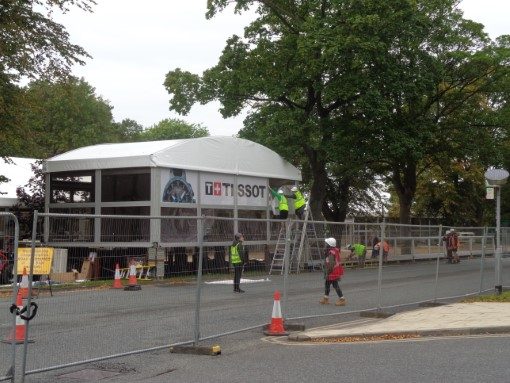 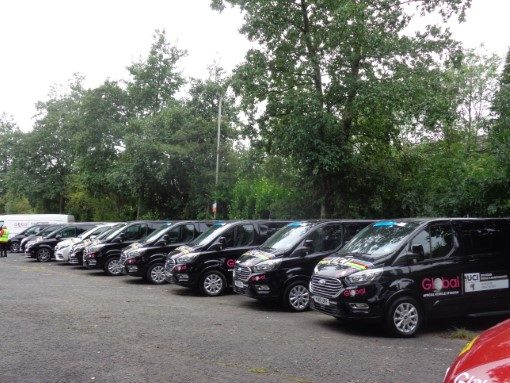 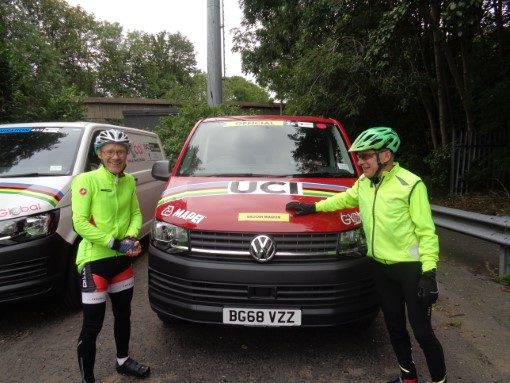 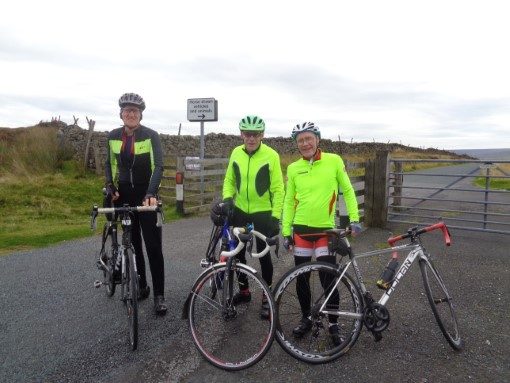 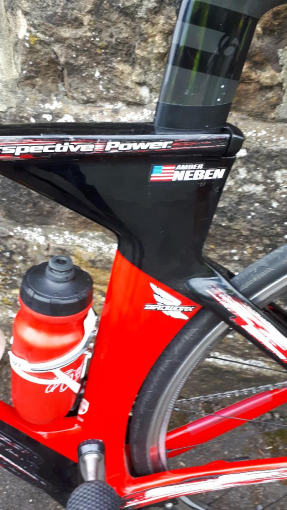 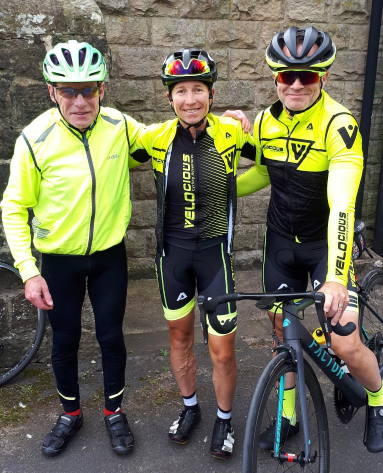 The weather forecast was good but the day started with an inconvenience, in fact a public inconvenience, the public conveniences being closed because of wet paint, despite protestations by Dave Wilson that where we wanted to convenience ourselves would not have been painted, but jobsworth prevailed so other venues had to be found.

We had seven riders including Marvin who we had not seen for a while (nice to see you Marvin), plus Terry and John.

Our first coffee stop was taken at The Courtyard Cafe, the coffee was good and the tasty toasted teacakes done to perfection (you missed this Dave S or can you get TTT on board ?), the toilets were excellent, so all the boxes were ticked for the EG`s, a Cyclists Heaven, which is where the “A” team headed for.

The “B” team headed for Boroughbridge, Roecliffe, Markington to take coffee in Ripley before heading home, a nice ride in good conditions, comfortably warm and little or no wind. Dave P. 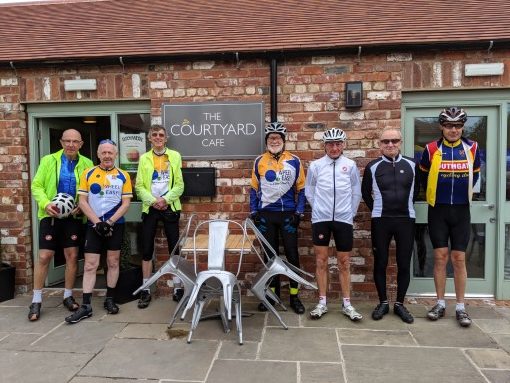 Eight of us left Stamford Bridge around 9.30 as expected. The ride was lovely as all away days are known to be. We kept up a good pace with some interesting banter and having started with a few ups, we were rewarded with the lovely glide down into Thixendale. On to Fimber where we took a photo by the pond. Sledmere provided good refreshments and we headed towards Malton for lunch.

All went as you would expect until we got to a gravelly bend near Wharram le Street. We all got round except Tim Richards who slid and broke his collar bone. After a long wait, Tim went off in the ambulance to York hospital where they confirmed a clean break. Tim Rhodes became ride leader at this point. I cycled back to Stamford Bridge get my car so that I could collect Tim’s bike. Tim is now home, hurting – already re-united with his bike which was collected when they were passing. Away day rides are always exciting. Steve W 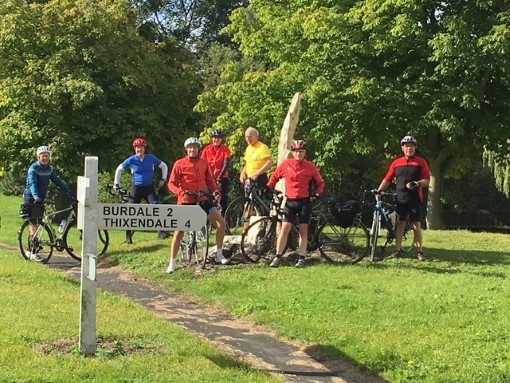 I took over as Ride leader in unfortunate circumstances. We left the scene of the accident very shortly after James’ Group caught up with us and cycled as one large group to Norton/Malton. As we went into the lunch stop at The Kitchen, Norton, the Groups divided into their original Groups except Mike Clark joined our Group. After a lengthy lunch we made good speed past the wonderful Castle Howard back to Stamford Bridge which we reached at around 16:20. A great 51.5 mile ride with a few hills thrown in but marred by Tim’s accident. Here’s to a speedy recovery, Tim. 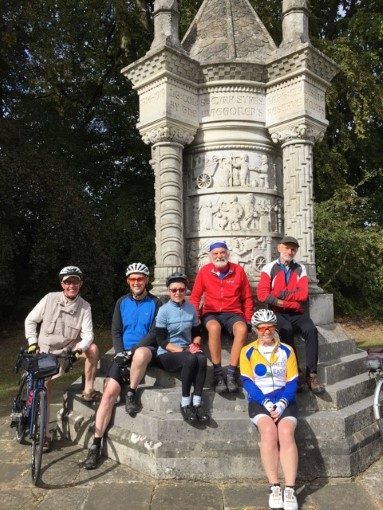 The second group on the Away Day consisted of Colin, Helen Tate, Janet Glynn, Allen Banister, Mike Clarke (until he was tempted away by the first group!), Peter Bradley and myself. Our route took us the same way down Thixendale where Colin and I were lucky enough to see a lone hare sunning himself/herself high on the hill and completely ignoring our efforts to make him/her move. As always Thixendale was a delight and moving on to the delights of the cafe at Sledmere House we enjoyed warm sunshine after a relatively cold start at Stamford Bridge. Having admired the war memorials and particularly the detailed workmanship just outside the house, Colin took us on a slight diversion to Wharram with more open views and which unfortunately upset Janet’s Garmin as it took umbrage and refused to work properly for the rest of the ride. Following the encounter with the first group and Tim’s unfortunate accident, there was clearly little we could add to the proceedings and so we moved on, only for Helen’s rear cassette cable to part company with the changer, leaving her in a relatively high gear and a rapidly disappearing peloton. Not to be beaten however she managed to limp to Malton with only one short uphill walk, where repairs were carried out by the bike shop in the main square whilst we relaxed over food and drinks outside a nearby cafe. Full repairs effected we headed off round Castle Howard, where Janet’s malfunctioning Garmin took her and Allen the wrong way and Turbo boost to my bike was required to bring them back. The, apart from a somewhat scared crossing of the A64, the rest of the ride was uneventful and we arrived back at the cars having enjoyed the usual good day out in excellent company. I recorded about 54 miles but slightly less than the advertised ascent of 1200 metres.  James G 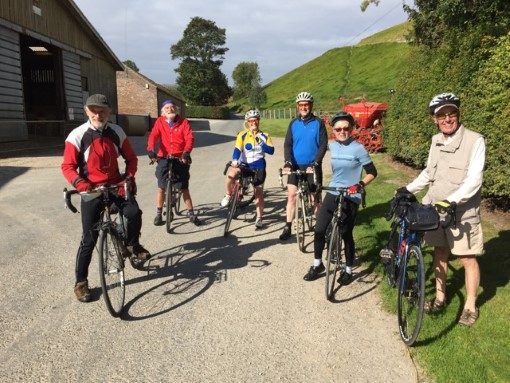 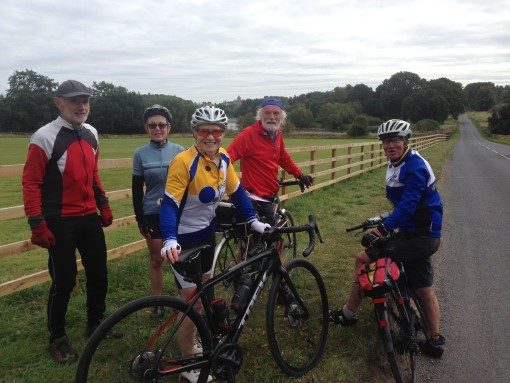