“Heater? What Heater?”  A might chilly this morning but still eleven of us set off from Hornbeam with a slight delay while Jean’s puncture was mended with the kind assistance of John.  Up to Little Almscliffe Crag we went into a moderately mighty headwind and then dropped down to follow the route past the Sun Inn, Pennypot Lane, and then up to go across the A59 to Kettlesing. Soon we were at Sophie’s looking forward to some warmth after the long descent. But lots of other folk had decided to get into Sophie’s as well so several of us settled into the summer house in the corner. We needed the hot coffee as it was still chilly sat outside. Then I came to pay and Nicola said “Were you warm enough with the heater on?” My blank look said it all!  Anyway, now we know it is a radiant heater on the wall of the little shelter and the switch is in the corner.  I went home for a hot shower to regain some body heat, but next time we will know!!! Martin W. 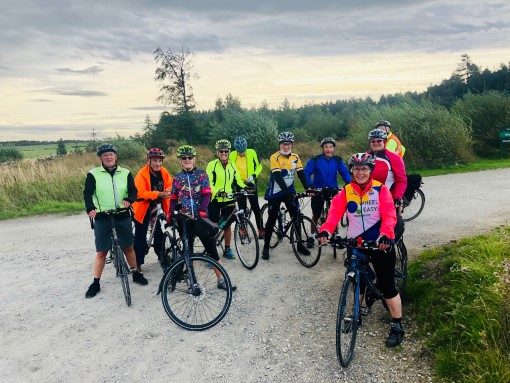 For reasons involving wine, guests and cooked breakfasts I arrived late at Hornbeam intending the Medium ride to Eccup, in time to see the last cyclists disappearing up Hookstone Road. I caught up to find this was the Medium plus ride and tailed after them to Kirby Overblow where I parted towards the A61 thinking I surely couldn’t be far behind the Medium group. I cycled as fast as my legs could carry me for 25 miles following the excellent route instructions, until I finally acknowledged that a re-union was not to be. I hypothesised that either a) they were very fast, b) they had gone a different route, c) they were doing it in reverse, c) nobody was in fact doing the Medium route. I enjoyed a solitary coffee at Wetherby and arrived home in record time;(No chatting to slow me down) but missed the company. The moral of this story is: Early to bed, early to rise…….Sally C 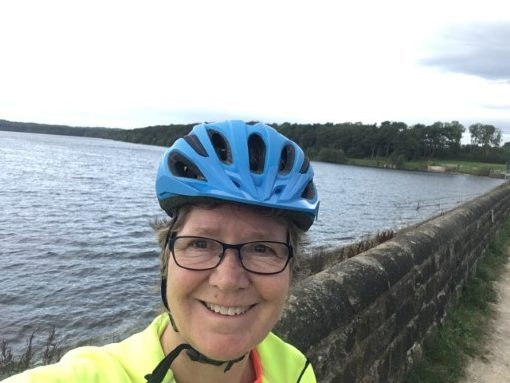 Four of us decided we weren’t up to the pace of the faster group as we rolled out of Hornbeam. Usual route to Kirby Overblow where one decided he was feeling fit and left us to catch the faster group. In near perfect riding conditions, the remaining three trundled on over to Linton, Collingham and Bramham and on towards Tadcaster. As we were together we made good progress to Ulleskelf and Cawood. We had decided this would make a good coffee stop. Riding into Mrs B’s kitchen café at the camp site we were too late for breakfast and too early for lunch. However, three coffees were produced where we were able to sit outside and chat. Now we had some caffeine on board we thought the sky was the limit. So, joining the solar system path way at Naburn we headed for Saturn and on to Jupiter where the Brunswick café beckoned. Here we started chatting to a couple on a tandem from Driffield who kindly took our obligatory photo. Leaving the orbit of Jupiter we proceeded to Mars, Earth, Venus and Mercury before coming back to Earth as we rode alongside the A64. Onward to Askham Richard, Long Marston, Tockwith, Little Ribston and Knaresborough. Lots of walkers along Abbey Road. At Low Bridge Chris R carried on Waterside while Mike W and myself had a quick ride up Bland Hill and home. 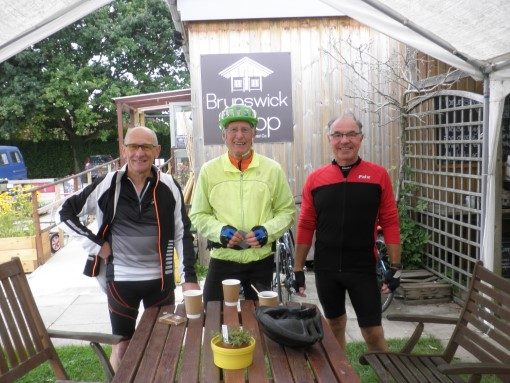 In the absence of an official ride leader nine riders set off from Hornbeam but at the top of Walton Head Lane we were down to six – three girls and three boys. We caught up with the ‘fast boys’ in Linton who had mysteriously ‘lost’ a couple of riders in their group. From that point we rode together until the long stretch after Cawood bridge to Naburn Marina. We had made the decision not to venture to Riccall and the dreaded cycle path. Somehow, I found myself second wheel to Grant (aka Konrad in my world) hanging on for dear life – what was I thinking! Unfortunately, some of the group became detached and being unsure of the route took a while to find Naburn Marina. The service was swift and the ‘fast boys set off for home while Helen and I finished our second coffee. Although the skies were threatening the rain didn’t materialise thankfully. We decided to bypass Thorpe Arch cycle path and head straight for Wetherby and then Kirk Deighton (Julie’s route). We said farewell to Allen and PCJ (the Knaresborough boys) leaving four remaining – counting down the hills. My legs definitely feel like they have done 59 miles at 15.7 average. Thanks all for a lovely ride. Janet G 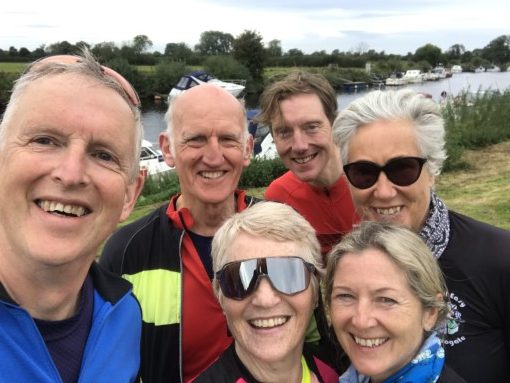 Medium Plus Ride to Hebden

Thinking that the forecast today was a good one I suggested a ride to Hebden as a late summer ride with an early start. The attraction of coffee at the Old School Room in Hebden was another factor. Well the sunniest part of the day was the early part where we rolled through Ripley listening to the encouragement of the Yorkshire Warrior event. Tim and two Daves went off ahead at a pace to suit and as the tea room was packed made a good decision to get on. Our choice of food was determined by the length of the wait but excellent coffee, scones and tea cakes did the job until our lunch stop at the Stazione in Ilkley.
The ride from Hebden to Hartlington and Burnsall is delightful and a route we rarely ride. Colin and Peter left us to venture over Pockstones Moor Despite the chill and the lack of sunshine this is an outstanding ride and we all enjoyed the change and the challenge. about 60 miles, loads of climbs but well worth the effort. Thanks for the company, James, Monica, Paul, Colin, Peter and John H who joined us at Hebden. Gia. 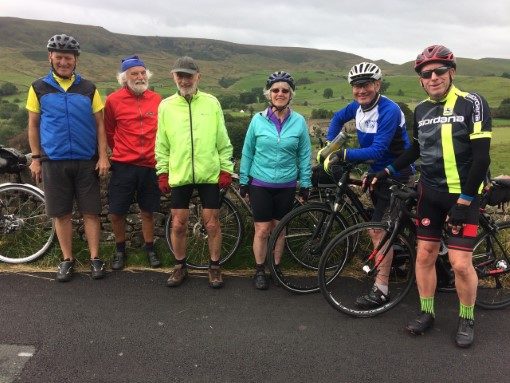 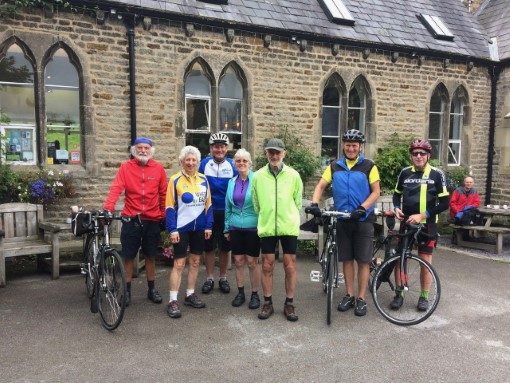 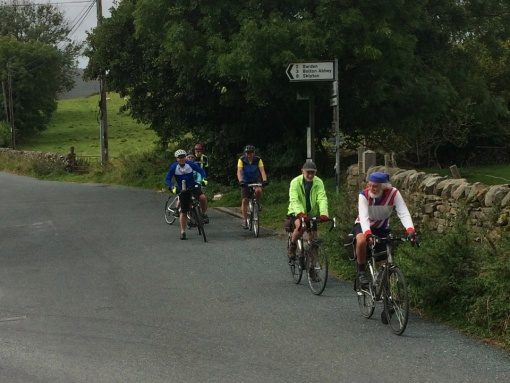 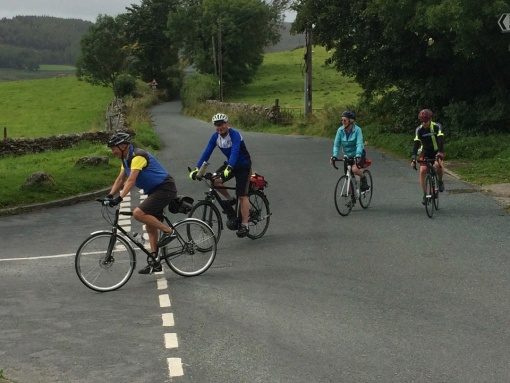 Medium Plus Ride – Off Road

Just me and Peter for Pockstones Moor to-day.

The track is in reasonable condition, mostly rideable. The last few bits of heather were still in flower in this windswept environment, but very few grouse about, it will be a very poor shooting season. (it’s the shooting which pays for the upkeep of the tracks which I want to ride)

Photos of the climb up to the moor, with Wharfedale behind, and Peter paddling across the beck.

Poor views of the Vale of York on the descent, very hazy this side.  Back to Ripley for 4.00, with the only shower of the day.  Colin 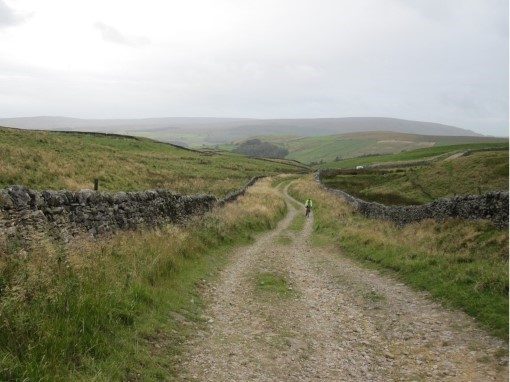 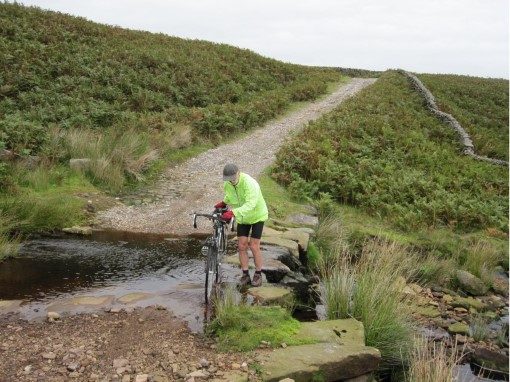 Only 3.25 riders on the Long Ride to Cray and Bishopdale today! The 3 riders were Peter L, Mike C, and myself. The 0.25 rider was John H who cycled with us as far as Hebden before returning to Harrogate with the possibility of meeting up with a Medium Plus group somewhere along the route.  On our way from Beckwithshaw to Penny Pot Lane, there were temporary traffic lights on Pot Bank restricting the Otley Road to single line traffic over the narrow bridge, where large barricades were being erected to stop any riders on the Harrogate Circuit of the UCI World Championships going over the parapets – a very sensible precaution!  There was a fair old wind blowing against us for the first 40 or so miles as we travelled northwards, and it had quite a chill with it, so our progress was a little slower than usual.  As we entered Grassington there was a poster announcing Grassington’s 1940’s weekend,14 & 15 September, and we soon spotted a Chelsea pensioner crossing the road, with his wife dressed in period costume too. The centre of the town was closed to all traffic, where many 2nd World War army vehicles were on display, the Earby Brass Band were playing tunes from the era, many residents were dressed appropriate to the time, and the shops, cafes and hotels were all participating too.  Our usual cafe, Cobblestones, had a 1940’s menu, and the waitresses were also dressed for the occasion – see photos.

After our cafe stop, we continued into the wind through Kettlewell and Buckden before climbing the Cotes de Cray to the top of Kidstones.  This was the first categorised climb in the 2014 Tour de France and will be used again in the Men’s UCI World Championship in 2 weeks’ time. The fast descent into Bishopdale provided me with my usual adrenalin fix -sufficient for at least the next week or two. We had a further refreshment stop at the Jervaux Abbey Tea Rooms, and finally returned via Thirn, West Tanfield, Ripon and Knaresborough. Having battled into the wind on our outward leg, the wind dropped and didn’t provide us with the assistance we’d earned for the return leg.  Arrived back in Harrogate at 6.30pm.  93 miles door to door, and Garmin tells me we had 6,000′ climbing.  Eric 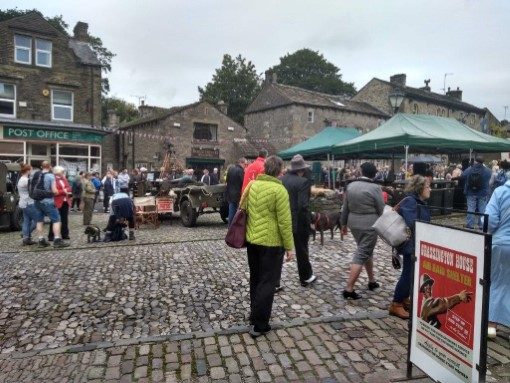 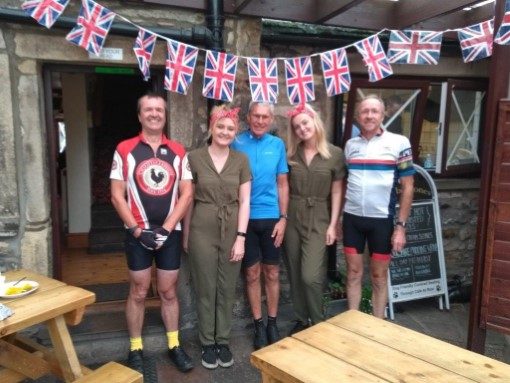 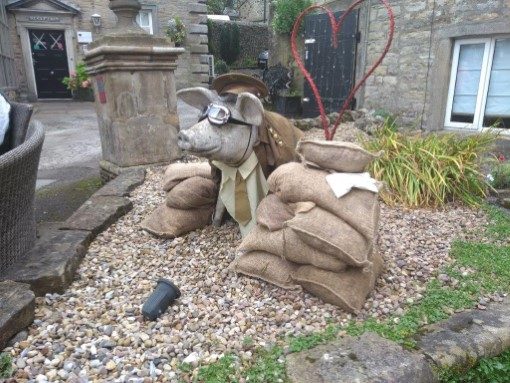