A small but perfectly formed group of 6 Wednesday riders set off via Ripley. Onwards  to Brimham and Fellbeck. Stopping only to admire the Common Spotted Orchid ( which is of course not common but rare) . A warm day and pleasant to at last enjoy summer weather. We churned up the hills and whizzed down the dales until we reached Dallowgill Moor our photos are by the only blooming heather ( ling according to Colin). Every day is a school day with Mr Thomson! With Jill’s guidance we found our way to Fountains and the very busy Lakeside cafe where we sat outside and enjoyed the hazy sunshine and lunch. 4 of us returned home via Watergate Road, Jill went via Littlethorpe and Colin went gravelling! A hilly but enjoyable 40 miles with pleasant companions. Sue C 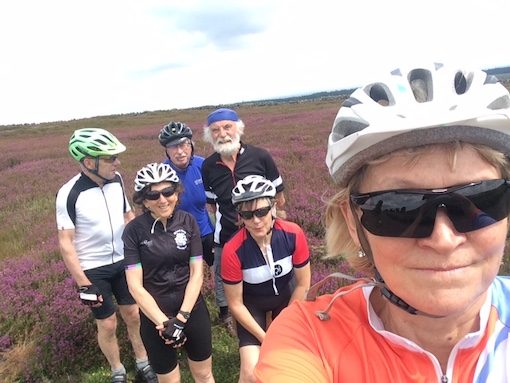 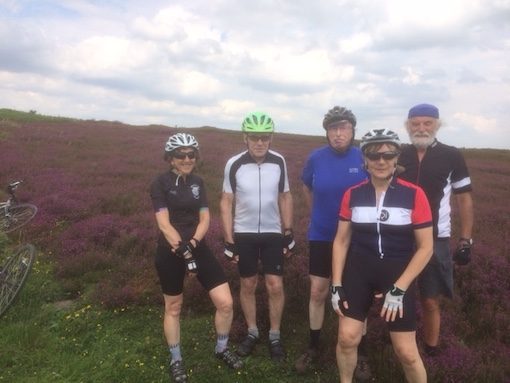 First of all I will apologise to Joe if I have the apostrophe in the wrong place.
We are on the Bavarian border stopping at a place called Wertheim, where the rivers Tauber and Main meet. For our Wednesday wander we based it on one of the Wien-radreise.
A good day, 26 miles going through quaint villages, vineyards and fields of golden corn, with a surprising amount of climbing (over 3000 feet).
This area has an amazing network of well signposted cycle routes mainly on purpose built cycle tracks or farm and forest roads, with something for everyone. 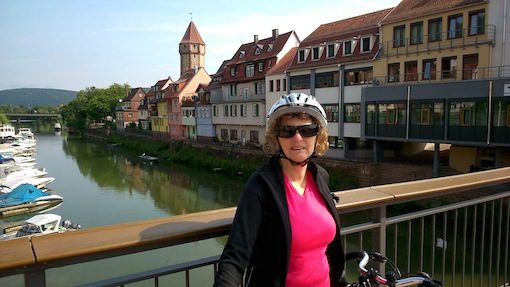 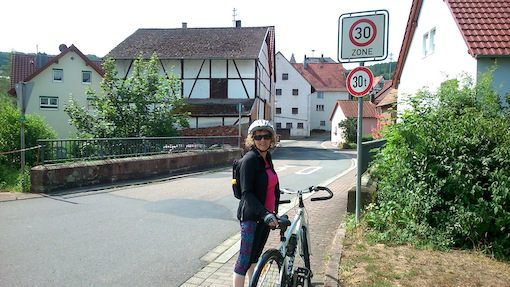 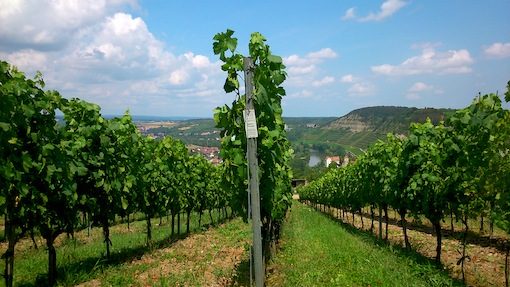 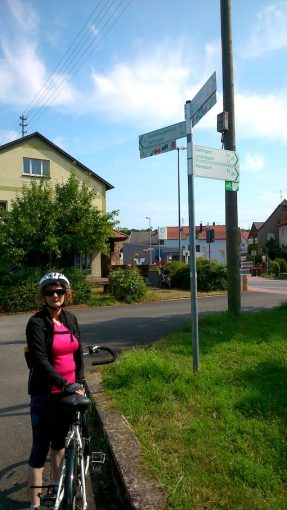 A somewhat depleted number of Long Riders rolled out today – a couple were doing hot things in France with several other apologies tendered.  But Ange and Alan boosted our number to a respectable six and off we sped south towards Scarcroft and the new venue for most of us at the Milk Churn.  Although we headed a little close to home for some, the Milk Churn was very well received.  It’s an offshoot from the neighbouring dairy farm (my doorstep delivery milkman, in fact) and has a speciality in Italian style gelati, stemming from one of the owners having graduated from Bologna’s ice cream university.  I can only describe Richard L’s reaction to the array of gelati on display as ecstatic.  He was straight in with iced elevenses with a three scoop tub.  The rest of the group stuck with trad cyclists grub in the form of toasted teacakes and scones.  Sitting outside (photo) in warm sun completed the picture of complete satisfaction and with several intent on returning.  In fact Richard may still be there!

The next stage of the route took on and across A58 and A64 before a dash through Scholes, Barwick, Aberford, Lotherton to the outskirts of South Milford.  After a couple of missed turns we found the road to Lumby and settled in to the idyllic grounds of the country manor house that is Lumby Hall.  Billed as the Orangery cafe bar, this is a quirky venue, as pointed out in a couple of Trip Advisor reviews.  It’s best described as a play barn with bar and cafe facilities and the orangery must be a reference to the former site of it.  Service was sluggish, we think because there had been a kitchen issue, but the staff were friendly and apologetic about the delays and the food was excellent and not too dear.  The menu is well suited to cyclists, who they are keen to attract, apparently.  No ecstasy (no, not the drug!) this time but a sense of intrigue that such a great venue is being kept secret.  With the optional loop to Fairburn and Ledsham being dropped we resorted to a dash northwards on A63 past the former Boot and Shoe Inn, to reach quieter roads through Micklefield, Aberford and Bramham.  Missing a turn on to the cycle path from Wattle Syke to Wetherby condemned several of us to accompanying heavy traffic to the Mercure roundabout.  We felt that the traffic was heavy today, heavier than on recent rides through this locality, although our timing was imperfect as we caught the school rush.  But the familiarity of the A168 path and the usual route to Little Ribston went some way to restoring normality.  The group split at Little Ribston with Alan and Peter J heading north to Knaresborough, with Ange, Andy and myself routing ourselves to the Showground and our farewells.  The ride  was 65 miles with 3500 ft of ascent (surprising for a route billed as mainly flat) and featured two memorable venues, reached by too much use of main roads, sadly. Ideally it needs a rework.  Winter homework, maybe.  Terry 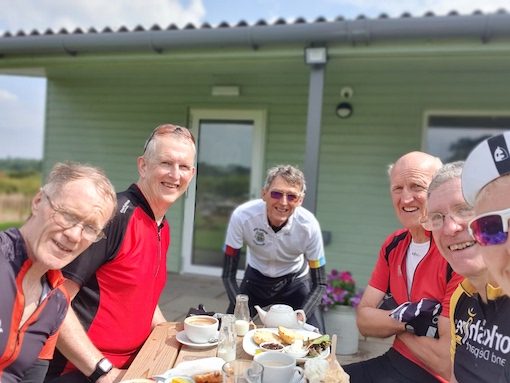 We had a good turnout at Low Bridge, a dozen plus, including Chris B who we failed to make contact with last Wednesday on his return from his tandem tour of France.
First coffee stop Morrisons Boroughbridge to allow us all to get together in comfort for caffeine and chat. The “A” team took a longer route than the “B”  to arrive just that bit later but it looked like at a punishing pace.
A relaxed break with some riders having two coffees, the “A” team were aiming for Ampleforth, the “B” team were away first heading for Thornton bridge soon to be passed by the “A” team at a fast pace and in true Tour de France manner shouted greetings and encouragement in something had to pass for French, but who cares it was a great moment and the “B”`s got a buzz from it.
The “B” team, comprising Bill, Bob, Dave P1 and Norman headed for Aldwark Bridge to take a nice little break at Great Ouseburn post office, then back to Knaresborough and home.
A nice ride in excellent weather at a sensible pace that suited us all.  DaveP 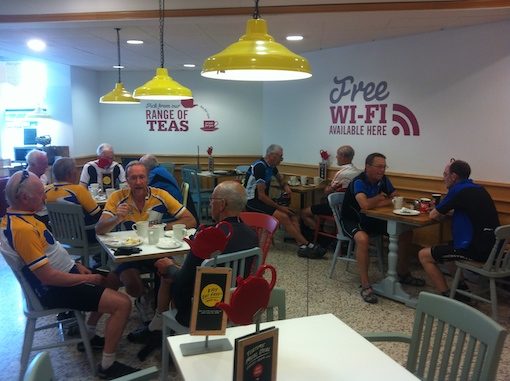 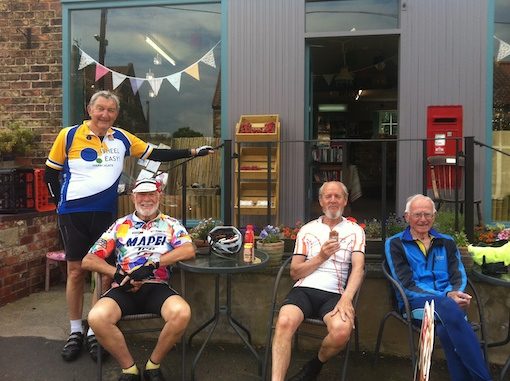 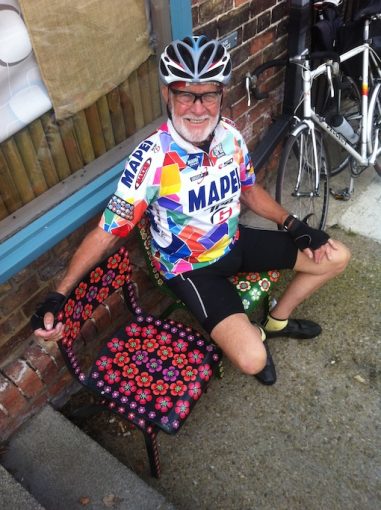 The A-team left Knaresborough taking the longer route to Boroughbridge (via Arkendale and Marton-cum-Grafton), where the B-Team were already enjoying their coffees. We decided to go to the Ampleforth Abbey for lunch: a very pleasant change, as I can’t remember ever being there on an EG ride. 7 of us set off from Boroughbridge, but Nick and Dave W(1) were not going the full distance & left us at Carlton Husthwaite to make their way to Easingwold and home. At the Abbey we had lunch outside in the courtyard, under the watchful eye of Cardinal Newman’s bust.   I was expecting to resume the ride along the main road to Oswaldkirk and then to Gilling East, but Dave W(2) led us through the magnificent and extensive sports grounds of Ampleforth College. What a wonderful alternative route this is to Gilling East, which I never knew existed! There is an added bonus of arriving in Gilling East alongside the model rail tracks of the Ryedale Society of Model Rail Engineers, which is one of the largest model railways in the UK.  Eric.

At Easingwold, Chris, Colin and Dave W(2) continued home, whilst the Waters Boys (Geoff and Eric) opted for another drinks stop at Curious Table. I arrived home at 5.40pm, 5 minutes before the start of the rain. 61 miles (ish) for the Knaresborough Knaves, and 71 miles for this Harlow Hillbilly. Mr Garmin tells me I had climbed 3,700′ – above average for an EG ride.   Eric

A good group for the Wanderers ride this morning, a faster group was soon formed and they set off, I had 10 in my group and Liz P a further 6. At Spofforth we picked up Al, then on to the cycle path to Wetherby and cycle path to Walton, with no one wanting to take the shorter ride options. A nice steady pace was set to Wighill, Tadcaster and Bolton Percy in nice warm sunshine. We stopped at Doylys for coffee and sat outside in the sun, the fast group were there and Liz’s group soon followed. The return was to Colton, Bilborough, Askern Richard, Long Marston, now a head wind seemed to be getting up. When passing the Civil war memorial Mike then reminded the group to look on the left in Tockwith at the memorial with the WW2 Halifax Bomber, I thought it was a 4 engine Sterling, so we stopped to have a look and confirmed it was a Sterling which crashed into village in October 1945 killing the crew and the village postmaster. At Little Ribston it was decided to cycle to Spofforth and Follifoot back to Hornbeam rather than to Knaresborough, we thought as it was a flat ride we may as well take in Follifoot, Crimple and Hornbeam hills. Colin left us for Knaresborough with instructions to cycle up Knaresborough Hill.  A good ride, lots of the usual chatter along the way. 46 miles. Chris 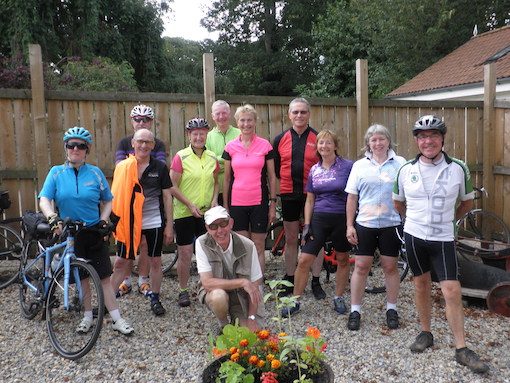 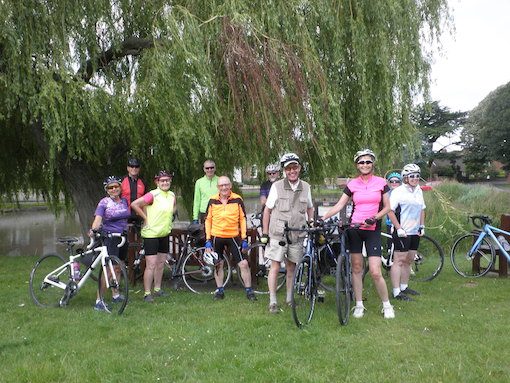 We were a group of 6 and followed Chris’s group a short distance behind to Bolton Percy where we joined them in the garden for an early lunch. We were still eating when they left and were not seen again. The route through Colton and Bilbrough was new to some of us but we were soon back on familiar ground at Askham Richard. At Marston Moor we paused for a rest before facing the stronger headwind into Knaresborough where 4 of us stopped on Waterside to try the ice creams. Many thanks to Keith for backmarking, Mike for protecting us from the wind when we needed it and Karen, Alison and Jeanie for your cpmpany. Liz P 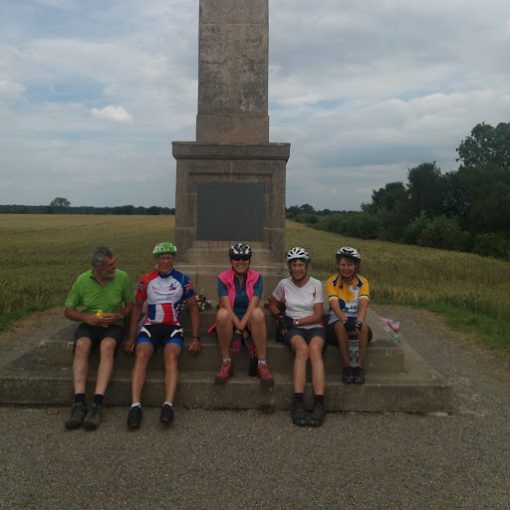 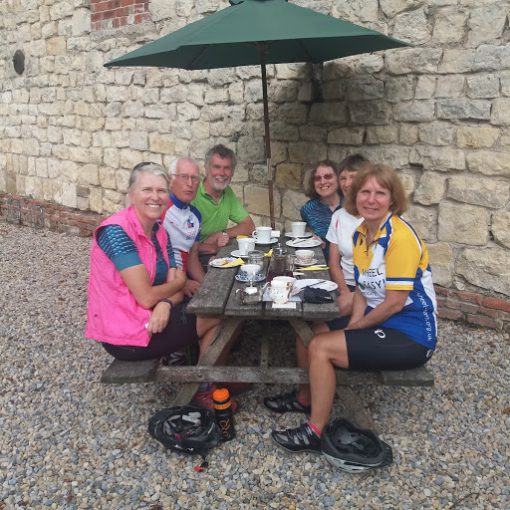 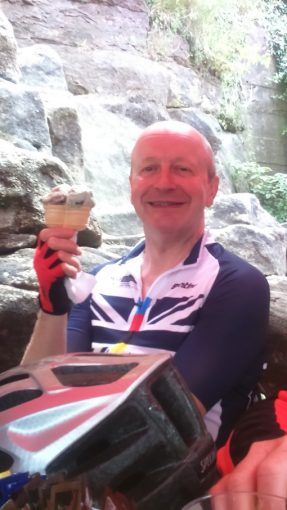