Still getting used to my new bike, I “volunteered” for the short ride. Takers were Paul B and Joe S, so the three of us decided to do the advertised route in reverse, giving an easy option to extend if we felt limber and had time.

So, off down to Goldsborough via Abbey Rd. The traffic gods were smiling and parted the traffic as we crossed the A59 heading up to Flaxby. A nice run up to Arkendale and over to Farnham where we decided to do a little extra by taking in Lingerfield and Scriven.

I parted company with P & J at Waterside, returning home via Forrest Moor while the others headed uphill to Harrogate. A nice little ride, some sunshine and breeze, 20 miles on the clock. Brian N

Twelve riders today and Mike Wills kindly lead the second group with Mike Smith bringing up the rear. The route was Little Almscliffe, Menwith, Birstwith, Clint Bank, Shaw Mills to Drovers and up Watergate Lane. It was very hilly which meant a slower pace but the views were fantastic.

We were all pleased to arrive at Fountains for a break and sustenance. Mike Smith went straight home from here while the rest headed for Ripon, Littlethorpe and back via Knaresborough. 45 miles and nearly 3000 feet. Thanks everyone for contributing to a great day out. Liz P. 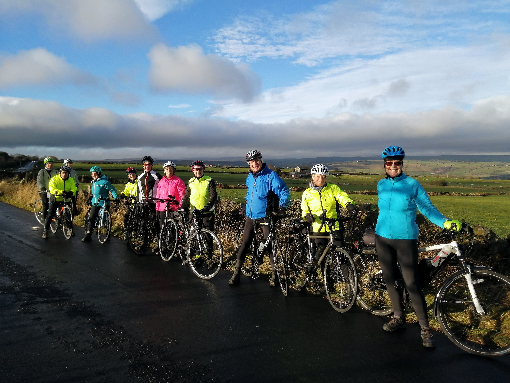 Five of us left the Showground and became eight in Ripley and then six at the Drovers and having finally settled on that number for the group we headed up to Brimham slightly against the wind past Rabbit Farm. Turning for Sawley the wind pushed us down the main road so fast that Yvonne missed the turn but Tim recovered her and having been joined by Martin and Yvonne on their tandem we took the back lane from Sawley to Fountains and into the Visitor Centre for refreshment and chat.

The return was through the Deer Park with a great view of the sun catching the Cathedral, which Yvonne managed to capture for one of our photos along with some interesting cloud formations around Brimham (See attached). Sorry but this week the photos are scenic rather than a variety of cycling jerseys. I pealed off at Bishop Monkton for Knaresborough whilst the remainder headed home through Markington, Ripley and along the Greenway.. About 40 miles with plenty of climbing and good company comprising Gia, Yvonne D, Paul, Kevin, Tim (2 or 3) and myself for most of the time and with John, Stuart, and Martin & Yvonne intermittently.  James G 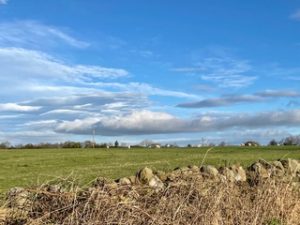 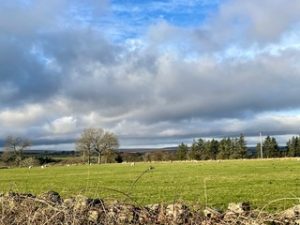 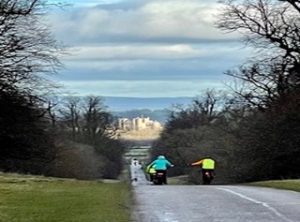 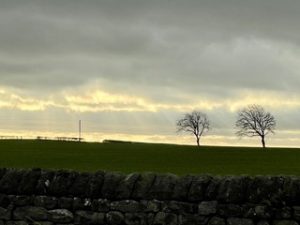 One out of Five’s not bad

Route 170 was on the menu so two groups set off towards Follifoot and the Vale of York on a chilly but dry morning. The brisk wind mostly from the west helped us on our way. By the time we climbed away from the main road at Spofforth we were warming up and enjoying the bright sunshine! It was very nice out, such a contrast to the previous week after which we had only just dried out!

The usual route East, we had two chairs in our number; Helen and Vince, not three so no chance of a hip hip hooray,  Tim, Rachel, and me. We were flying along but not so fast that the second group weren’t hot on our heels. At Long Marston they arrived at the cross roads just as we got across before traffic delayed them and that was the last we saw of them. The consensus was that it was too early for a cafe break so we passed Askham Richard.

Then into the wind towards Bilbrough and Wighill. Riding as a group sharing turns into the wind we continued to make good progress, that was until not long after Catterton. We squeezed past a pair of tractors making punctures or hedge trimming as they probably call it. Helen was just about to say we made it without a puncture but even her thinking it was enough to tempt providence and I felt road against rim. I was the only victim so one out of five wasn’t bad although we will never know if one of the tubeless brigade would have had a flat. 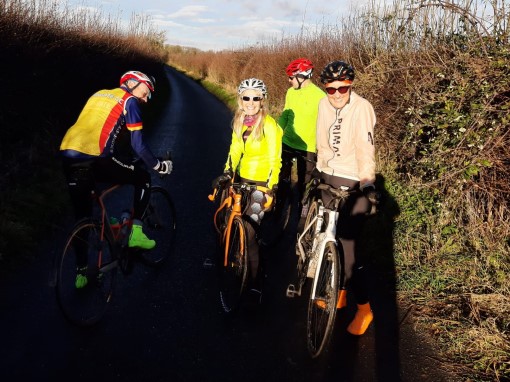 As ever I had no shortage of advice and help and Helen had a bag of innuendos (Snake shaped confection) which were very sugary and gave us a boost while the banter kept our spirits up. Again what a contrast to last week when a puncture would have been a real challenge in the wind and rain, today it was a minor inconvenience. It was decided that to repay my comrades for their support I would do the ride report, seemed fair enough to me.

Rachel headed for home leaving us four to stop at Thorpe Arch for lunch and the usual wide ranging discussion which included the subject of ride leadership and group riding. I’m looking forward to taking my turn.

We used the cycle path to Wetherby, much improved with its new surface. I headed into Knaresboro’ and the Beryl Burton Way while the remaining three went further west and home via Haggs Rd.

Another great day out about 45 miles in sun and good company. Chris B