Four Poddlers set out on a short quick ride… hoping to be back before the rain. No cafe stop was mentioned. So, we set off doing the old favourite the Breaton Loop without the Loop.  We followed the normal route from Hornbeam to Knaresborough to Lingerfield, Scotton, and back to Nidd and Ripley. En route we were speedily overtaken by EG Supremo Dave Preston and ended up with time to spare having avoided any cafes visiting a Covid-19 so far free Cafe Graham. Well done Jane true grit demonstrated.  CG

A bright and sunny, but very windy day, with wind speeds forecast to reach 40 mph from the west. Around 12 takers for the ride, including the usual suspects. We had originally planned to cycle to Wetherby and then west to Collingham, but the wind persuaded us to omit the bit to Collingham, and simply return from Wetherby by a slightly different route. This meant that, by and large, we were cycling with the wind at right-angles to us, rather than into it or with a following wind. Lead Hall Lane, Burn Bridge, across the A61 and up Walton Head Lane to Kirby Overblow, where we met up with Paul B and a couple of others. A Range Rover had some problems overtaking us on the way to Kearby-with-Netherby, and we had a distinctly wind-assisted run into Wetherby with refreshments in Morrisons. The Harland Way was said to be muddy, so we decided to return via Kirk Deighton. Unfortunately, I was not sufficiently decisive and organised, so some went straight on at Little Ribston, and some turned left to Spofforth; thus, I lost my back marker and several Brownie Points. At the Brethren’s’ meeting hall near the St James Business Park, Liz Pugh asked if I was not a little concerned that my flock had diminished. I rang the boss, and she confirmed that they were in Spofforth, and all was well, but asked what sort of ride leader I was…  My sub-group chose Abbey Road to Low Bridge, where Brian et al turned left for Forest Moor Road and Liz P and I went straight on and then up Knaresborough hill into a very strong headwind.

A handsome quartet set off on Route 124 and up Leadhall Lane into that chafing wind. At least the sun was out and it was dry so plenty of reasons to be cheerful. And it was generally okay except for the unannounced side blasts that shoved riders across the road at will. A quick stop at North Street Deli in Wetherby to discuss composting (and all its many interesting components) before returning via Kirk Deighton, Spofforth and Rudding Park. Lambs blissfully gambled in the fields before we were hit with a sting in the tail; gale force winds plundered across the showground. We moonwalked up the hill and “touched elbows” to say “tara” for another day. 31 miles. Tall Tim 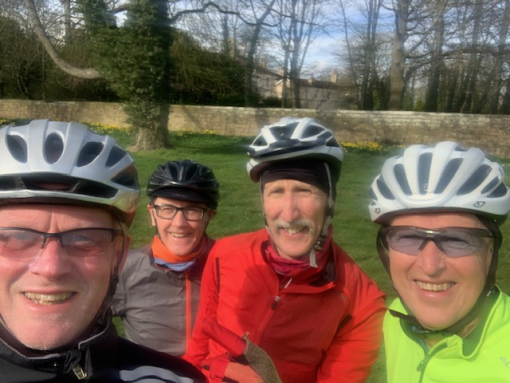 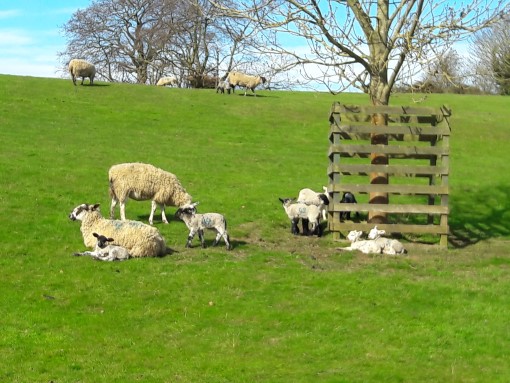 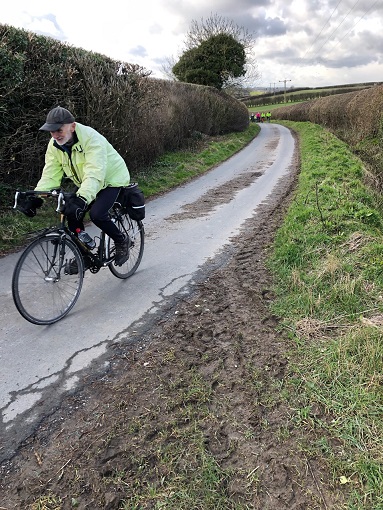 Despite dire weather warnings there was a good turn out at Hornbeam today and the Wednesday Ride was well represented with a Bakers Dozen that became an ordinary dozen at The Top of World on Brackenthwaite Lane. The route took us to the end of Brackenthwaite Lane at Briscoerigg and then down to Almscliff Crag to be photographed with the sheep in the sun. Onwards and downwards through Huby, past Jane and Duncan’s mansion, through Weeton and Dunkeswick to do a very well ordered and behaved few hundred yards on the A61, turning right towards and through Kearby, Sicklinghall and into Wetherby. A split decision between The Gourmet and Pomfrets worked well as one of the group didn’t want to be seen with his wife who was already in The Gourmet. However, The Gourmet service must have been better as they were caffeinated and fed before those of us in Pomfrets and so they headed off home first, the remainder following shortly along the cycle path at the side of the old A! and across to Little Ribston. The route home then was through Spofforth and Follifoot against the wind which was a bit troublesome at times, but we were home nicely before the predicted rain arrived, having enjoyed a relatively warm sunny day.  James G. 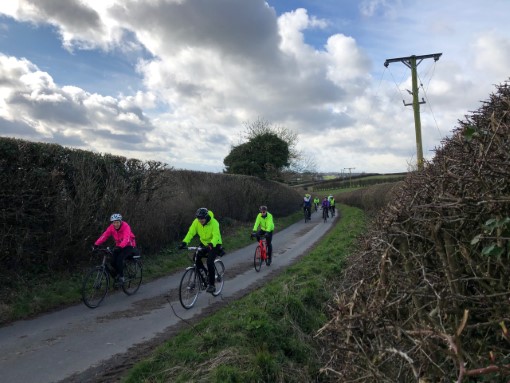 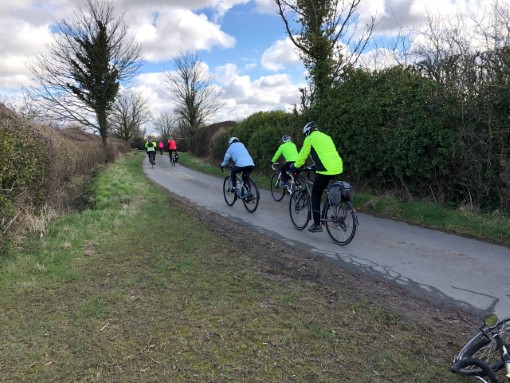 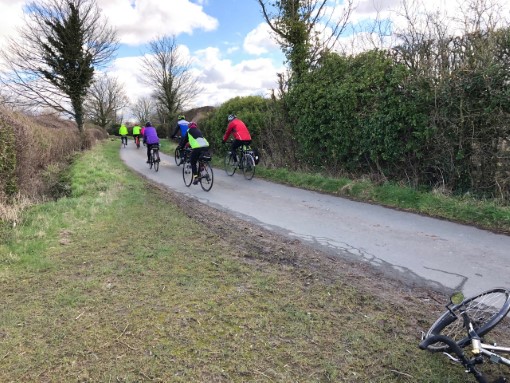 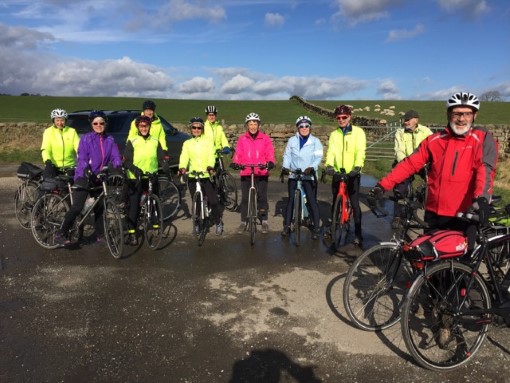 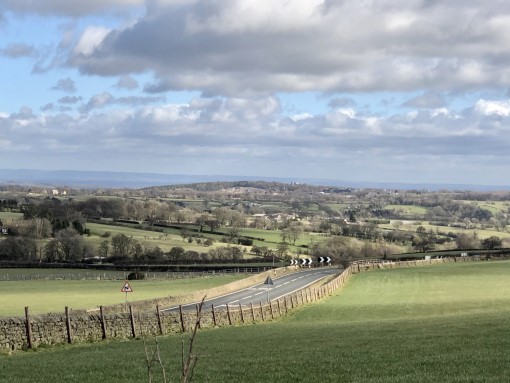 The sun was shining as seven riders set off from Hornbeam along the Greenway to Ripley, meeting three riders at Bilton Lane and another at Ripley. It was slightly breezy and we knew the wind speed would increase later in the morning. As we approached Kirkby Malzeard the wind speed had increased creating gusty side winds. While we had the group photo, we needed to decide whether to cycle the high road to the moors or the low road. Five riders decided to keep to the original route while the others carried on to Grewelthorpe and Masham. On the climb up Kirk Bank we had a gusty side wind, but the high hedges did give us some shelter. Then we turned north to climb the hills to the top, this seemed rather easy and we made a good pace up, was it the strong wind behind us or the energy gels and protein bars?! The views were very good looking over the moors and towards Roseberry Topping, then we had a heavy sleet shower making the rainbow after it appear very vivid. Then a good downhill ride to Masham and on to Thorp Perrow café, meeting up with the other group. The return was to Bedale, where the wind did seem to ease a little, then to Wath and Ripon when the showers and wind started again with a head wind back to Harrogate. A good ride with a mix of weather, sun, showers and varying wind speeds. Elevation 3,600ft. 62 miles. Chris R. 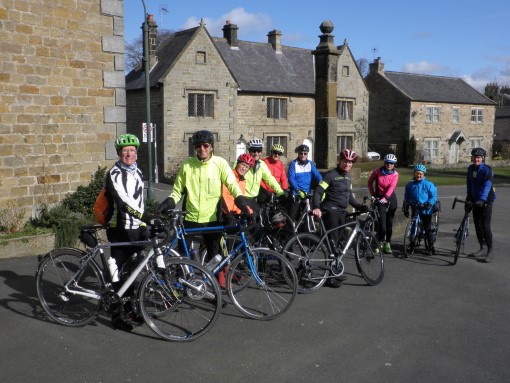 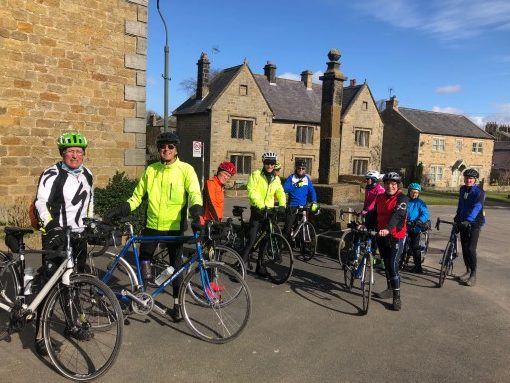 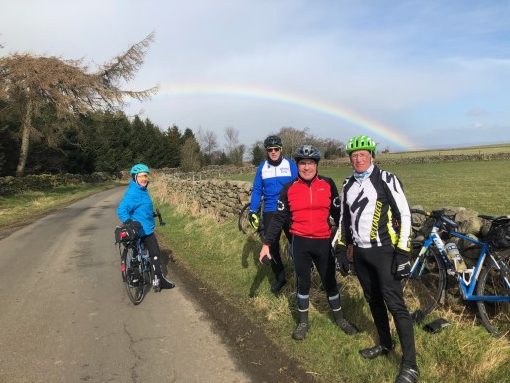 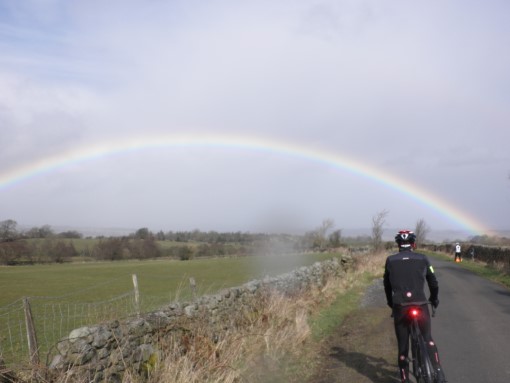 Although the weather was good to start with, it was not a big turnout at Low Bridge with illness and some non-cycling injuries.

Last Wednesday we ran two teams to the same two cafe stops, with the “A” team cycling approx. 25% longer distance, but timed to perfection with both the A&B teams riding in to cafes at the same time.

We had three Dave`s plus a guest Dave. Dave Watson took the “A” team to Bunny Hill? sounds like a celeb or exotic dancer?

Dave Preston headed for Ripley via Nidd meeting Caroline G and fellow poddlers on the way. The wind was now starting to get a bit of a nuisance by creating almost full stops but definitely wibbly wobbly at times, the Greenway did give some shelter in places but in open areas passing people front and behind could be a bit difficult with regard to safety.  Dave P 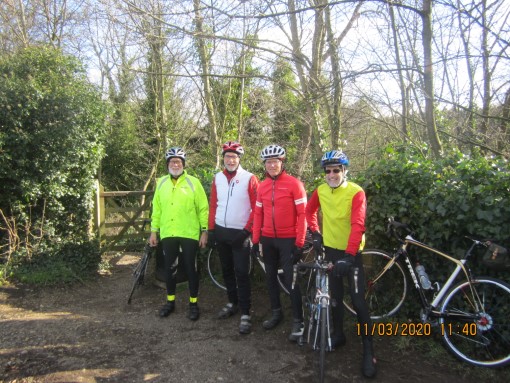 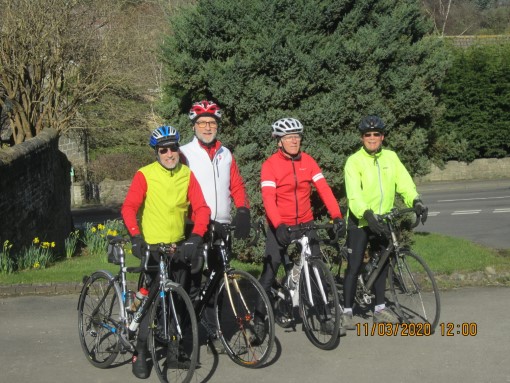 On the return leg from Boroughbridge towards the end of our ride, the definition of enjoyment was sorely tested as we cycled into gusting south-westerly winds accompanied by freezing driving rain peppering our faces.
Disappointingly there were only two EG’s waiting to greet me at Low Bridge, both Dave’s making it know a “full house”. Presumably the remaining perhaps having put themselves into “self-isolation” in view of the current global problems!
As we readied ourselves to set off, Nick arrived with fireman friend, yet another Dave, to join our depleted numbers!
Ignoring the forecasted winds we headed off in a north easterly direction to make our first port of call at “Rabbit Hill” cafe. Dave P (senior) had already rerouted back towards home at Farnham so we were already down to only four riders.
Refreshments complete our leader guided the group, (I can hardly call it a “peloton” with so few in number) continuing in the north-easterly track to Great Ouseburn where Nick & Dave (fireman) departed the group aiming for Whixley whilst Dave Peatfield and myself headed for Aldwark and Raskelf.
Here, turning left into the wind made going a little laboured but sticking to a steady pace and taking it turns to push the wind we progressed with determination towards our goal, lunch at “Plenty” in Boroughbridge, trying to ignore the exposed sections of the road and hunkering down low over our handlebars.
Good fare was appreciated at “Plenty” replenishing our resolve for the rest of our journey home.  Parting company as we passed through Knaresborough we said our farewells noting we had, despite the conditions, managed to complete a creditable 40 miles. Worth getting out of bed for some might say.  Dave W.