We had a fair number of riders at Low Bridge and were to be sent on our way by Dave Siswick who had called to see us all.
He is looking fit and is raring to go.
Destination was Eric`s call, one of our members Chris had been tandem touring in France and returning via York.
So it was on to Taddy for our first coffee stop at the Lemon Tree cafe.
After which some riders headed for Wetherby and the rest to York and Cycle Heaven cafe, unfortunately Dave Watson who had time constraints could not stop and headed for home and made it within his time limit.
Dave Preston and Peter Bradley also had a time constraint and headed for home via Acomb after a drink and a snack, for most of the ride we managed to avoid the Yorkshire Show traffic.
Dave P.
As Dave P mentions in his report, we had gone to York following receipt of a text from Chris B, who had been on tandem holiday with Mrs B, watching the Grand Depart in Bruxelles.  Mr and Mrs B had arrived in Hull this morning and were bound for York, and wondered whether they might meet the EGs.  Well, we tried!  I kept Chris updated on our progress and ETA at Cycle Heaven, but it just didn’t happen.  The tandem exit from Hull took longer than expected so they would have been arriving at Cycle Heaven about 1.5 hours after the EGs.  However, although we didn’t meet Chris, we did have the pleasant surprise of meeting WE members Andy Clarkson and Vanessa at the cafe.After the departure of Dave P and Peter B taking the shorter, quicker route home, 7 of us made our way through York, and over the new cycle/footbridge alongside the Scarborough railway bridge.  Good to see that further progress has been made on the ramp on the north side of the bridge, reducing the previous detour by a couple of hundred yards or so!  Work continues, but its nearing completion.We took the usual route out to Beningbrough, where we started to shed riders:  Nick and Allen continued homeward bound, whilst 5 of us had a third refreshment stop – after all, this is an EG ride, and we have a certain reputation to uphold!.  At Arkendale Peter N turned off for home.  At Sandy Bank, Colin headed for his car parked at Scriven.  Dave P(2) and Geoff turned off in Knaresborough, leaving just myself to return to Harrogate.  67 miles on what turned out ot be a really good day for cycling.   EW. 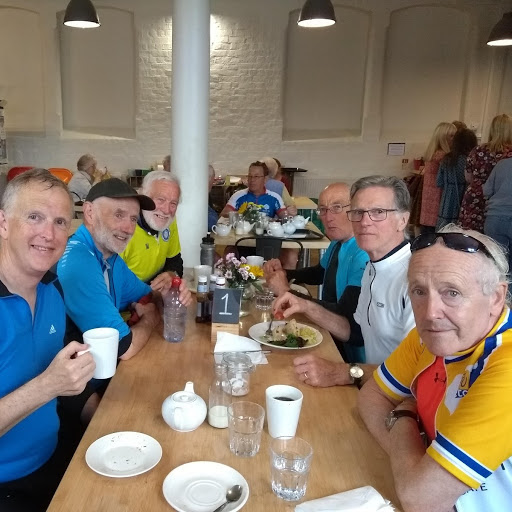 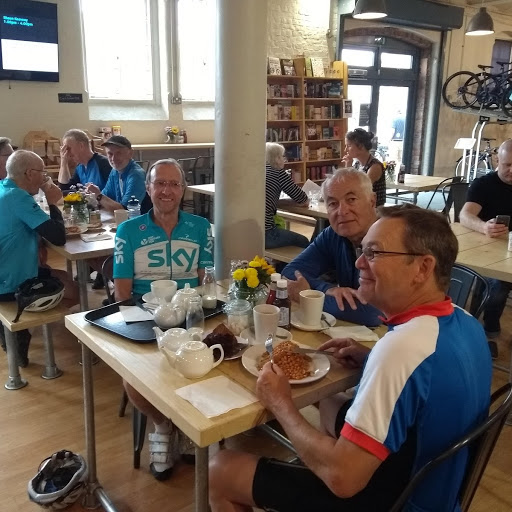 The uncertainty of the weather forecast today determined our first stop which was Fountains Visitor Centre and to help James ease back in to the rides after his recent hip op. We mingled with Terry’s long ride for a short while until they sped off towards Bagby.
After coffee and discussion about the Channel 5 programme about cyclists and the reassurance for our existence given by an excellent video by British Cycling and Chris Boardman we moved on briefly to the Hunt/Johnson debate. Ghastly!
James, Kevin, Mark and Stuart cycled back towards Knaresborough while Paul, Colin, Alan, Judith and I headed off to Aldfield, Dallowgill Moor and the Wath road before dropping down in to Pateley for our second cafe stop of the day at Wildings. This was all a first for Judith and another Wheel Easy adventure. Colin and Alan bravely went back via Smelthouses and Brimham whilst the remaining three did the fast run to the toll bridge and back via Hampsthwaite.
It turned out to be a fine day, great to be up on the moors with the heather out in places and Colin reeled off a whole loads of names of wild flowers which we all promptly forgot. But we agreed they were very pretty.
great day, 43 miles for the Harrogate starters and lots of climbing for us all. Gia 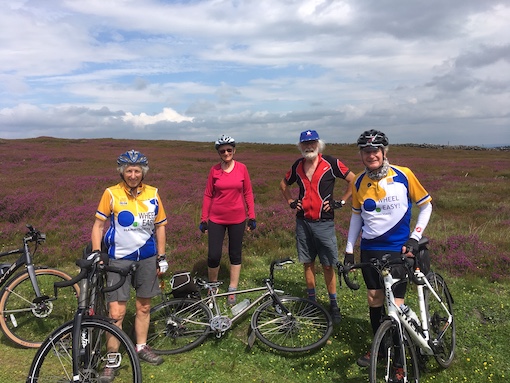 Strangely not many people at Hornbeam or en route through town. Five people wanted a gentle short Poddle. The plan was to go up to Little Armscliff on to Penny Pot Lane, first right to the A59 and Kettlesing. We had lost Monica before Beckwithshaw as she thought she d not locked her back door and Surjohn  before the turn off at Beckwithshaw as he was working at the Yorkshire Show at 1.
We continued without incident through glorious countryside to Hampsthwaite and up Grainbeck Lane home to check out curtain purchasing or watch the Tour de France. A good mornings enjoyment. 20miles. CG

Show traffic today depleted the number of Long Ride starters from Hornbeam to just two, but a cunning pre-arranged RDV at Bilton Lane car park boosted the tally to six.  This nice-sized group then Coxed and Boxed with other Hornbeam groups to Ripley and beyond before making the eastward turn at Drovers towards Roecliffe, where Richard L exchanged brief good wishes with Dave S through an open window at the Siswick residence.  Out of Boroughbridge towards Dishforth airfield and eastwards again to Cundall, we made good progress in the strengthening sunshine to Asenby, where care was needed in cornering on the newly-spread chippings.  Onwards to the new service road for Dalton Industrial Estate (due for big  expansion and marketing, I understand, including a new production facility for I’Anson Feeds of Masham), we were soon “enjoying” the perfume from Cod Beck Blenders which today smelled something like blackberry and apple.  The A19 was crossed with remarkable ease today, giving rapid access to our lunch stop at the Old Barn Coffee Shop, in Balk near Bagby.  They had sent a promo to our website news about a month ago and I thought it would be worth a try.  As our photo shows (courtesy of the cafe staff), lunch was taken in the sun on the terrace.  I’m glad to say that the menu and the venue found favour with the group – always re-assuring for route planners.  The only downside was the silly toast-rack bike parking.  Sheffield stands are available in toast-rack form and one of these would be much preferred, I feel.  After lunch the ride leader’s careless remark at Bilton which implied that this was a flat ride came back to bite him as the post-lunch section towards and beyond Coxwold and on to Crayke was distinctly hilly.  Reaching Huby we got back on the flat again to take in a second stop at Miss Daisy’s tearoom at Sutton Park.  Once more in the sun and sitting outside we could contemplate the good things that cycling can bring on a fine day.  Not everyone saw things in that light however, as we came across Aldwark Bridge to meet a rather grumpy toll-keeper, who accused us of failing to stop when we had slowed to a crawl and stopped.  It was a far cry from the jovial exchanges we usually get.  Beyond Aldwark, there was the uncertainty of whether we could negotiate the road closure on the approach to Arkendale.  Alternative routes were discussed but the final plan was to send a scout ahead to bring back news.  Peter J duly donned the mantle of Noah’s Dove and returned with the good news that the road was open, despite being closed!  We guessed that the locals had moved the barriers aside and proceeded as normal in the absence of any roadworks in progress nor, indeed, any kit parked up for the night.  Sandy Bank and Knaresborough came next, where we wished Lesley and Richard bon voyage for their trip to France.  Once beyond the Golf Club, the Show traffic began to assert itself but it was a small detraction from an otherwise very enjoyable 70 mile plus ride. 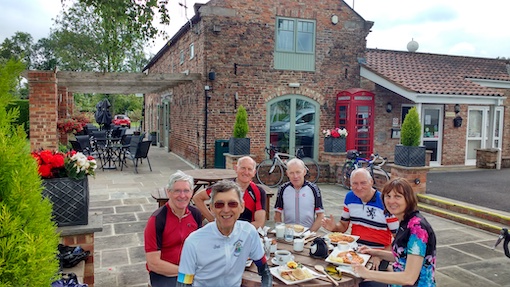 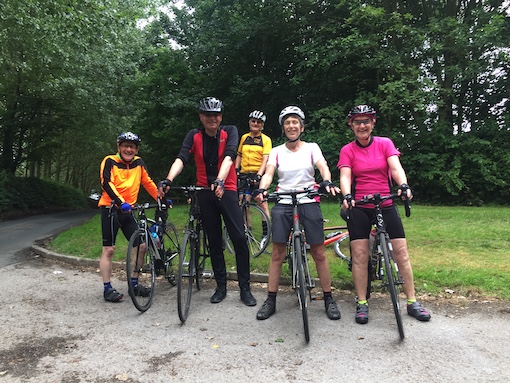 Seven riders left on the Wanderers ride – 1 bemused leader and 6 recalcitrant and unruly riders (Collete, Marwood, Top Tim, Vince, Yvonne & Zoe) who had a kaleidoscope of views on which café to visit and the best route back to Harrogate avoiding the show traffic. However, the sun shone as we waltzed out via Burnbridge to Sicklinghall, fox trotted along past Thorp Arch and Tockwith (passing 2 groups of E.G.s) and disco danced past Walshford and into Wetherby and North Street Café where the staff were run off their feet and service was not as per their usual best and Marwood’s bright yellow top did an excellent job in attracting many flying insects. Still a good samba rhythm saw us along the Harland Way and a quick shimmy past Rudding Park put us back into Harrogate before any of the predicted rain. 37 flattish miles. Tall Tim. 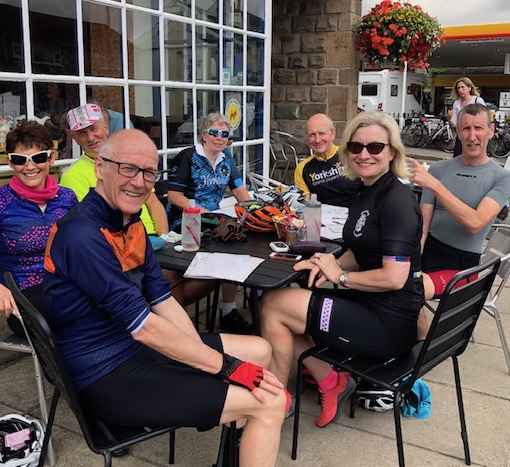 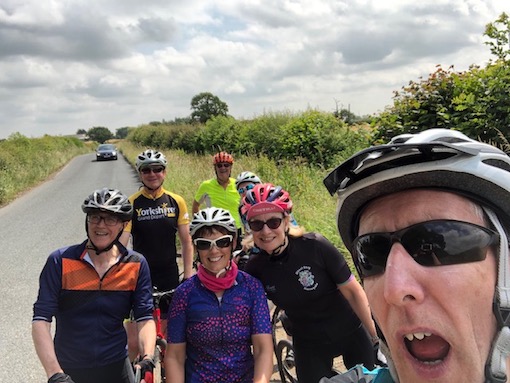