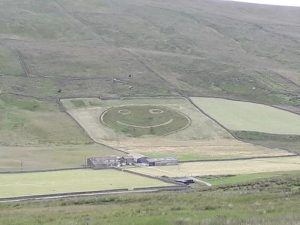 First of all Thank You to all the riders who did all or part of the Big Un with me. I had a great time, some good chats, lovely scenery, good regular feeds and finally a warm sunny evening ride home.
Seven riders set off from Hornbeam at 8.(me, Dave, Chris, Dan, David, Terry, Mike)  There was no wind and it was warm enough given that we were ascending most of the way to the top of Duck Street and then rolling down and up until Grassington. Richard met us at Cobbletones Cafe for our second breakfast and Andy put in a brief appearance before heading elsewhere. David Rawson departed for a solo Tour to Reeth. John Hackett met us at Buckden for the first of the big climbs –  up to Fleet Moss and over to Hawes. Then he too headed off alone.
The 6 off us then climbed up over Buttertubs for late lunch at the (this year very friendly) Tearoom in Thwaite. Without debate we all set off to Tan Hill (was there an option ?).   After the obligatory photo shot, we ran downhill (mostly) to Reeth and a tea in the Dales Cycle Centre. The final big climb (for most) was up from Grinton and then with the sun fully out and warm it wall downhill or flat(ish) to Harrogate via Leyburn, Middleham,Masham and Ripon.   Richard turned up Coverdale for his last climb back across to Grassington.    Chris and Dan enjoyed a speedy return while the remaining four of us were more leisurely especially after a contre temps with a thrush resulting in Terry ploughing up some grass on the Greenway.
This was not a speedy ride, partly due to the climbing involved but also because we all enjoyed the convivial pace.  Next year it will be an anti clockwise replay of this route – get planning now.  PeterL. 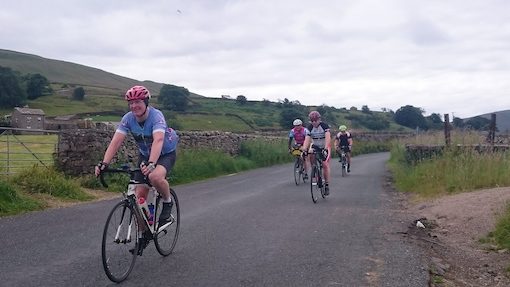 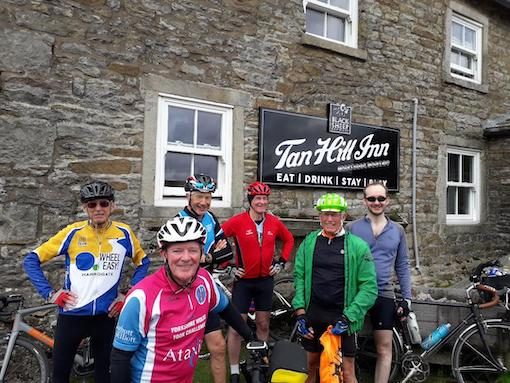 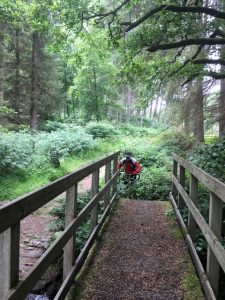 Just Peter, Maris and Colin for the gravel today. Three good and varied tracks, starting from Wath, through the woods then along Gouthwaite reservoir with views of the water, then the steep track from Bouthwaite to Greygarth where Peter is pictured riding. From the top we saw Roseberry Topping, Great Whernside, Simon’s seat and the White Horse…a real 360 degree view. Then another track through the woods to the hamlet of Dallow. On the way home, we dropped in on the village fete at Sawley….cue ice cream, tea and cakes.  Colin 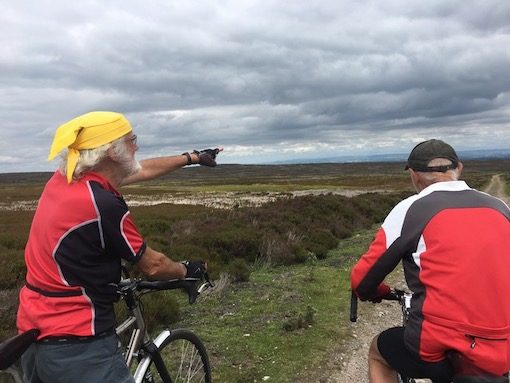 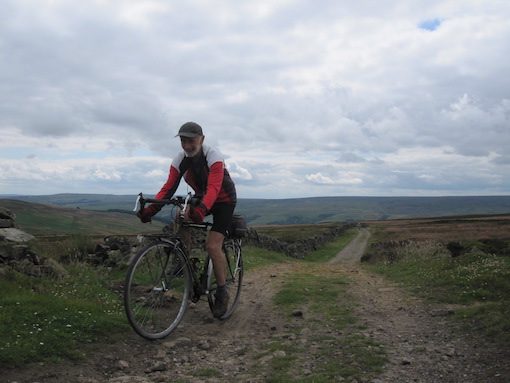 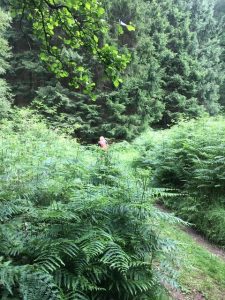 Not too much enthusiasm for Boltby Bank today so a shortened route was agreed upon. Five riders set off in cool conditions but by the time we reached our early lunch stop at Old Barn Coffee Shop at Balk, it was warm enough to sit outside. This is a new stop for most of us but is well worth a visit. Then it was on to the Howardian Hills with our next stop only 15 miles further on at the Curious Table in Essingwold. Good food and service can always be relied upon here and today was no exception. The last leg of our journey was a brisk sprint home only stopping in Arkendale to admire the pristine fully working steam engine. Back home by four after covering 61miles. Splendid weather and company. Thanks to Jill, Peter, Justin and Phil.   Glynn 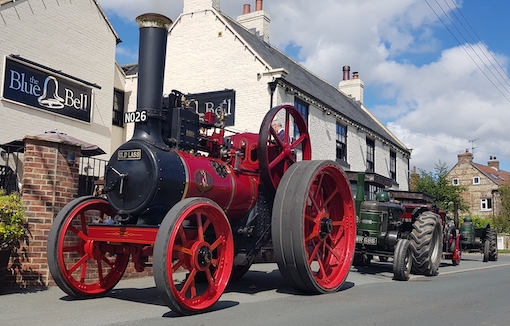 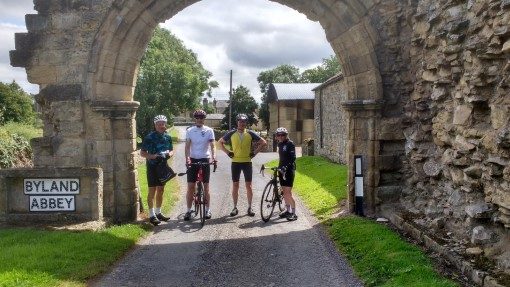 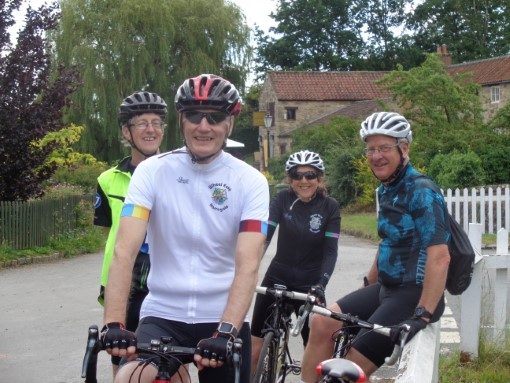 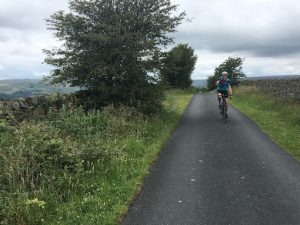 After some discussion at Hornbeam 7 set off looking forward to the hills. Up to Stainburn , safely crossing the A59 and through the Naval Base to the bottom of Duck Street. More hills lead us to the top of Yorke’s Folly and a nerve wracking descent to Teacups (I think that was just me , the rest of the group seemed to love this bit!) . The weather was good enough for an outside coffee stop using 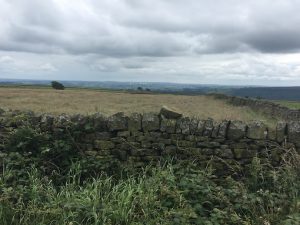 the lovely new table and benches. After a much needed coffee off we went to find Wath Lane. The hill up Wath Lane and the deep galleys didn’t disappoint ……but the views at the top were worth the hill climb. A final climb up the B6265 led us to the fabulous descent past Warren Forest Park. The two Marks left us at Drovers Crossroads to go home via Hampswaite leaving 5 to return home via the Greenway.

Thank you to Mark and Mark for keeping a good pace and to Tim , Tall Tim , Steve and Vince for a great ride. I think I led mostly from the back .

A very tired Zoë , no more hills this week! 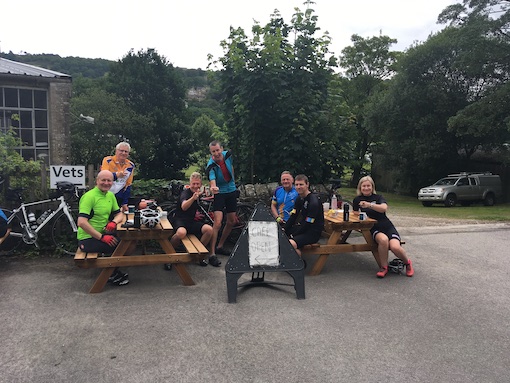 A group of 11 needed to go at a slower pace than the fast boys and girls but we were beaten out of Hornbeam by the short but definately not slow ride, as we were heading to the Squinting Cat before we could overtake them. The route was past Little Almscliffe, then past the Fewston Farm Shop, through the barriered road by the Navy Base, on to Menwith Hill Road and then Greenhow Hill Road. The weather was a bit dull but the views were glorious. Then we turned on to Braithwaite Lane and were soon heading down Yorkes Folly at a variety of paces. As we arrived at Teacups, Zoe’s faster group were about to leave so there was room for us to sit in the sunshine and enjoy cakes, bacon butties or a large jacket potato with cheese, beans and salad. James, who had very kindly been our backmarker(thank you) left us to go directly home while the rest of usheaded up to Wath where Colin took Maris and Peter B on an expedition to explore some of the tracks near Gowthwaite and beyond. Now a group of 7, Margaret took the King of the Mountain trophy for cycling up to the 1st bend of the drainage ditch road while the rest of us had walked it. Eventually we all got to the top (we had to admire the views!) and then it was an easy ride down to the Fellbeck Pub, a slightly harder pull up and then the easy descent all the way to Ripley.Unfortunately our K of the M girl was stung on the lip by a wasp but Liz F produced some cream so we hope she is now OK. Congratulations to Keith T on his 1st WE ride for a long time after illness, who protested that he couldn’t keep up but he could (though he may mave been speeding down Yorkes Folly!) You need to ask him about chasing down 2 cyclists dressed in red! About 42 miles, Liz P 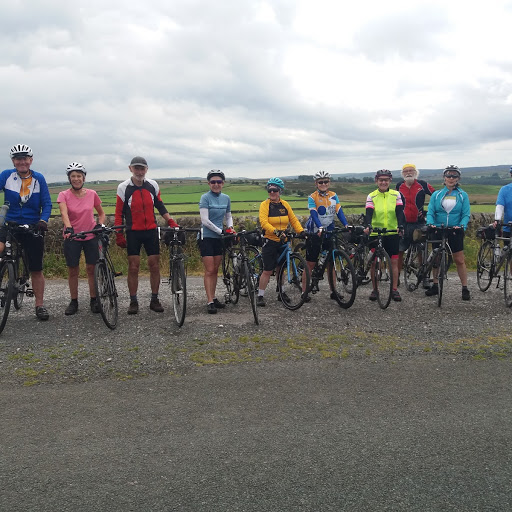 After a brief discussion at Hornbeam it was decided that we did not want to head towards Pateley Bridge we decided we would head to York and cycling Heaven for refreshments. It was decided that we would do the route anti clockwise boy doesn’t  it look different in reverse! we missed the turn to the race course after Trefor had to fix a puncture, then after cafe stop we found the riverside path closed to bikes due to the annual Dragon boat race.So back on the roads of York for a short detour. Then we missed our bridge crossing, back on route we returned via Beningborough Toll Bridge

Knaresborough Hill home, in time for the Tennis,Cricket,F1and TDF. Julie, Hellen,Trefor,Dave B,Darcey and Grant were the Gang of Six Lost In York. Grant

Just seven riders for the medium ride, maybe a few stayed at home to watch the tennis, cricket or Grand Prix from Silverstone on TV?! A little cloudy but warm as we made our way towards Burn Bridge and Kirkby Overblow. A small group of WE long riders passed us, as we made our way to Wetherby and the sun started to come out. On to the loop around to Thorner when turning left, we were confronted with the sign ‘Road Closed’, we carried on slowly until we got to Thorner and the big hole boarded off on the road junction, we could just get through the gap. Then back towards Bramham when the first few spots of rain started then soon stopped, on to Clifford and the café stop at Thorp Arch, a rider thought he had a problem with his gears, but all seemed OK. We enjoyed the sun sat outside while having coffee, then the rain started, do we or do we not put our waterproofs on?  By the time we set off it had stopped, onto the cycle path to Wetherby. Then on to Little Ribston, Spofforth, Follifoot and the hill back to Hornbeam. Mileage, WE calendar said 36, my mapping said 40, when Al left us at Little Ribston he said it will be 41 when we get to Hornbeam. I think we all agreed on 41 miles. A good steady ride. Chris R. 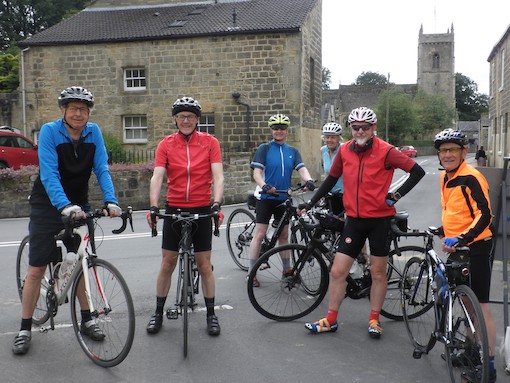